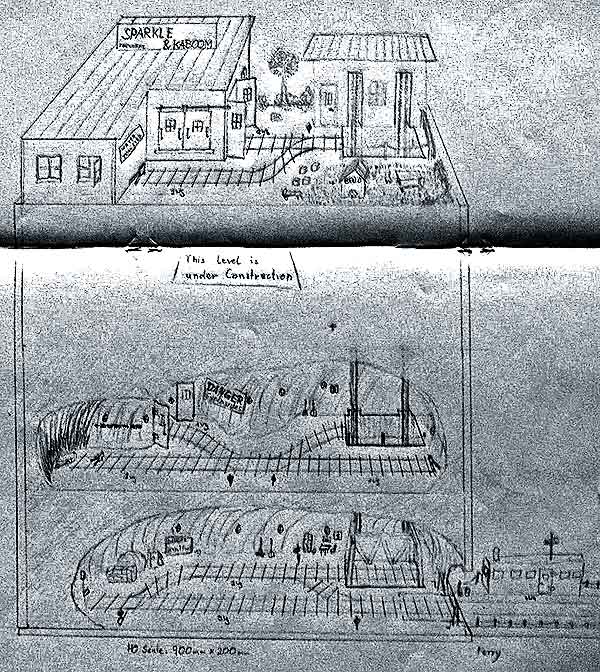 Sparkle & Kaboom is a factory for fireworks. It is built on a small, rocky island. The factory’s railway distributes and stores the goods.

(I remember reading about such a factory in Canada.)

Raw materials are delivered via ferry to sea level. Two tracks, including runaround, are hewn into the rock to take incoming and outgoing wagons.

The elevator takes the wagons to the second level: tunnels to safely store raw and explosive materials. There are several track spurs, one with bomb doors. On the far left, a scorched tunnel end and some debris testify to a former mishap.

Passing a section of not-yet tunneled rock, the elevator reaches the surface with the actual factory.

The factory used to be serviced by an old shunter, damaged beyond repair in the tunnel accident. A Trackmobile provides motive power now.

The ferry takes four wagons, while the loading tracks take three and two wagons. Three wagons fit into the storage level and three at the factory. Due to the alignment of the ferry and the storage and factory tracks, the runaround switches are a necessity, although they are often blocked by recently unloaded cars. Considering the miniature size of the motive power, Ol’Will always – barely – manages all the shunting.

The elevator is as old as the whole factory, all machinery is housed in the building at the top and the platform is moved by chains. It hauls the Trackmobile and a single wagon.