This micro layout is an experiment on fitting a continuous, but operationally interesting layout within the narrow confines of a micro layout.

The layout represents one of the branch lines (most of them narrow gauge) that branch off from the broad gauge line that snakes its way along the Douro river valley, in northern Portugal. These lines traversed very rugged terrain, with incredibly steep slopes and some amazing civil engineering works – many of these lines are now closed, but some remain open, mainly for tourist traffic.

The layout represents a short line which connects an iron ore mine, up in the mountains (which really existed), to a small harbor by the Douro River where the mineral is concentrated at an ore-washing facility and then shipped downstream on river barges.

Since the access to the mine by road is quite difficult, the old railway is kept in operation, using two Trackmobiles and a handful of four-wheeled V-skips. The line descends all the way from the mine, so the Trackmobiles manage to move the up empty trains over the 6% gradients and 6in radius over most of the line (descents remain hair-raising, however).

On the top, the line continues past the mine. A train following it will, after a steep descent, and some tunnel and bridge work, reappear, somewhat by miracle, coming out of the ore-washing factory by the harbor.

Continuous running will then be possible when train watching only is required. 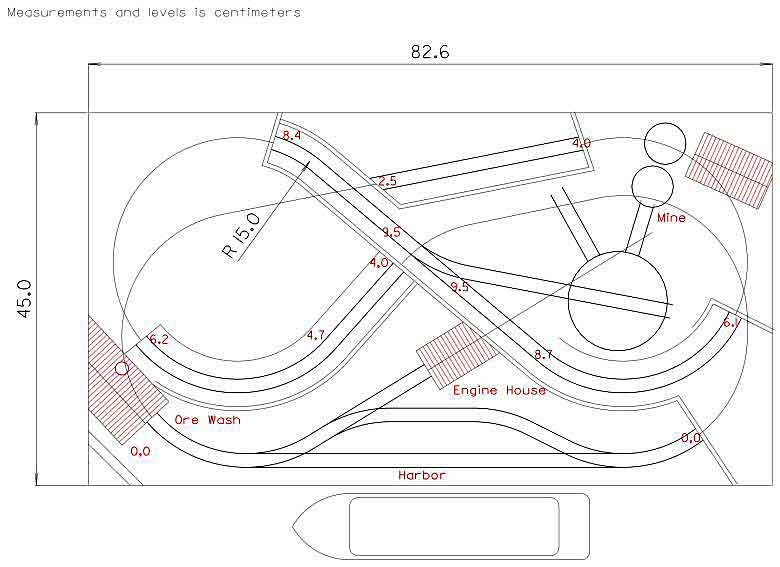