And now for
Something Not Completely Familiar (SNCF)
by Carl Arendt

[This layout was designed and constructed for a competition run by the English magazine, Model Trains International. The requirement was to produce a working model railway layout in an area the size of an A3 sheet of paper or its equivalent, two A4 sheets — about the size of two pieces of U.S. letter paper laid end to end.]

The first issue was scale and gauge. My objective as usual was to use the largest possible scale in this miniscule space, just to prove it can be done!

I took a look at G scale, metre gauge (1:22.5 on 45mm gauge) and decided that these trains were simply too large to build a working railway in the available area. (I hope someone will immediately prove me wrong!) Gn15 can provide a solution in the same scale using small industrial or estate-type trains, but several of my companions in Gn15 modeling were entering such layouts so I decided to try something different.

The challenge of attempting to stuff a very large scale into this pint pot continued to appeal, so I thought about 1:32 scale. Interestingly, O gauge track — 32mm — is almost exactly a scale metre wide in 1:32! So I doodled to see what might fit in 1:32m. The best I could do for a working railroad plan was a sector plate feeding two sidings. Not exactly a jackpot of activity!

But then inspiration struck. I remembered an immortal line by the dean of American layout planners, John Armstrong, who once wrote: “You can live close to town and still have it seem like a long way home if you have to change cars … and that’s the stunt that we use here to make up for lack of a … mainline run in our restricted space.”

So I used 16.5mm track to make one of the sidngs into a 500mm gauge industrial line that would exchange cars with the metre gauge line. Voila! an operating scheme appeared!

By this time I was firmly fixed on settng the layout in France, a spiritual home of metre gauge trains… so for added fun I made the industrial line electric, once a common sight in France. And in order to exchange rolling stock, we needed some dual-gauge track — so the industrial siding acquired four rails, concentric metre and 500mm gauges. Compared to three-rail solutions,this kind of four-rail dual-gauge track simplifies coupling narrow gauge locos to metre-gauge wagons, just as it does in the prototype.

Now things were beginning to get interesting! The plan at at this point looked like this:

The operating scheme would see a metre-gauge locomotive (which turned out to be a casual railcar) deliver a wagon loaded with supplies for the rural factory. It would leave the car on the sector plate and retire behind the poplars. The narrow gauge industrial switch engine would then advance, couple to the metre-gauge car, and pull it forward onto the dual-gauge industrial siding for unloading. Later the process would be reversed to return the empty car or to ship a load of the factory’s (unspecified) products.The whole thing could be very Gallic — and so it worked out (below). 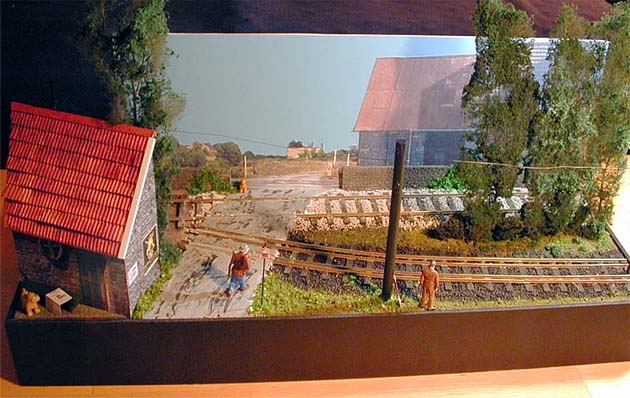 Unfortunately, one result of being unusual is that you have to do a lot more work! In this case, there is no commercial rolling stock available for 1:32m, and very little for 1:32e (500) either. So I had to make it all from scratch. In the event, I built three pieces: 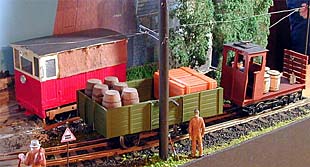 1. a metre-gauge Billard railcar, built from a photograph on the back cover of Gordon Gravett’s wonderful book, “Reseau Breton” from styrene sheet material on a motor truck from a defunct Lima British Rail Bo-Bo diesel model in O scale;

2. a 500mm gauge “saltbox on a flatcar” trolley work car, narrowed from an industrial line in Grenoble and designed from plans in Voie Libre magazine, constructed of styrene sheeting on a Bachmann On30 trolley motor truck (and using the Bachmann trolley pole); and

3. a simple five-plank four-wheeled metre gauge wagon made from a photo on the Internet of the Bay of the Somme railway in northern France. This little line also has four-track dual gauge trackage, in this case standard gauge enclosing metre-gauge rails. My model is built on a Slater’s O-scale wagon chassis kit.

In all three models many details remain to be added. In fact, taking these photographs reminded me that in my rush to beat the competition deadline I neglected to glaze the work trolley! 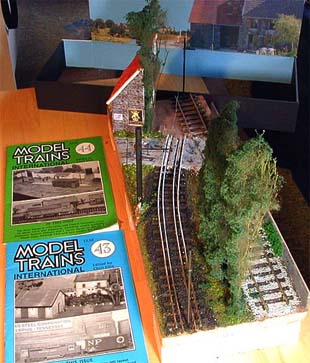 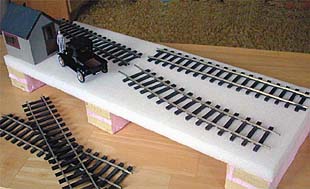 I also experimented with an unusual material for a layout base — florists’ foam. It comes in one-by-three-foot sheets in half-inch increments of thickness from 1/2″ to 3″. I used 1″ thickness, braced with cross stringers of 2″ pink extruded foam insulation board (above). Verdict: the material is strong enough, but does not hold trees, poles, and other objects very tenaciously. I probably won’t use it again.

The foam does, however, have the advantage of very light weight. The entire layout — with scenery — weighs 1.5 pounds — and that includes the foamcore backdrop and skirting which are not actually part of the layout but simply make it look nicer. The skirting and backdrop are removable to slim the board down to competition size — 210x594mm (left hand photo).

For layout scenery, I tried another unusual device. I ransacked the holiday albums of my friends who have visited France, and found one who had hired a farmhouse in Normandy last summer. Her photos included some very attractive landscapes and a couple excellent shots of typical local cottages. Her gite was called “Les Peupliers” (The Poplars), so that became the layout’s name. The cottage and barn were added to the backdrop (at the right side, somewhat hidden by a row of — you guessed it — poplars). The original digital photos were resized on the computer, printed out to size, and added to the backdrop to blend as gently as possible with the layout landscape. 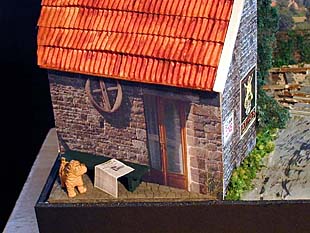 I carried this photographic borrowing to an extreme by making a foamcore shell and covering the walls with computer-enhanced photos of another Normandy cottage. I added a tile roof made from one of the corrugated-paper cartons in which light bulbs are sold.

This “instant 3-D model” scheme, borrowed from stage set design, also created a separate little “activity area” at the front left corner, shown in closeup at the left. A dog is examining the remains of today’s Le Figaro with an eye either to read the news or to use it for more utilitarian purposes.

Other layout details are commercial products from Messrs. Bantock & Lantz and K-Line Standard Gauge. The trees were made from dried weeds bought at a craft store (impossible to find them outdoors during mid-winter in Pennsylvania), sprayed with glue and covered with green flocking from Woodland Scenics.

All in all, I’m pleased with my journey into the unusual — it was a real challenge to my ingenuity! I think the atmosphere of rural Normandy comes across, although much detailing remains to be added after the contest deadline (especially the tall grasses that are so abundant in this part of Normandy).

In practice, adding a small post-competition fiddle yard at the east end would be helpful in creating more realistic operating patterns. This very large scale modeling does represent an attempt to stuff about four litres into a pint pot … and after the big trains are put on the rails, there’s not a lot of travel space left! The recommended fiddle yard will ease congestion a lot. The resulting layout is still slightly smaller than a three-foot bookshelf.

The typical operating pattern of Les Peupliers looks like this: 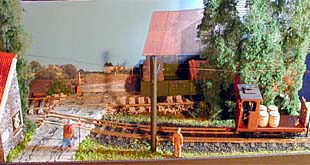 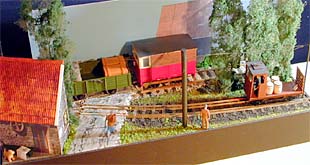 2. Metre-gauge railcar pushes wagon to sector plate behind cottage, then uncouples to retire behind poplars. 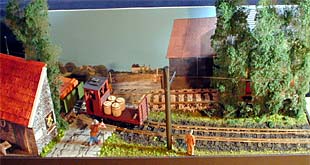 3. 500mm loco moves over and couples to metre-gauge wagon, ready to pull it from sector plate. 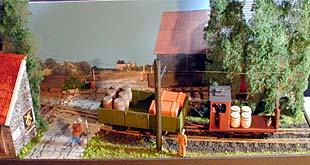