Shoebox Madness – Three for the show

THREE FOR THE SHOW

This was the scene at ExpoNG in Swanley, Kent, late in October 2003. Lined up facing the hall entrance were these three formidable but very small model railways. In fact, all three were created to fit in shoeboxes, by three indomitable English modellers — Chris Krupa (who started it), Chris O’Donoghue, and Richard Homewood.

Not only had they built working railways in a shoebox, they had done it in OO scale (narrow gauge division) and created believable — and attractive — scenic settings as well! To top it off, all three featured boats as an integral part of their design … and even better, they freely acknowledged that “Carl’s Imports made me do it!”

Articles on these bombshell display layouts will be appearing in various media over the ensuing months, but here’s an exclusive closer look at all three layouts here and now.     (Top two photos by Steve Bennett.) 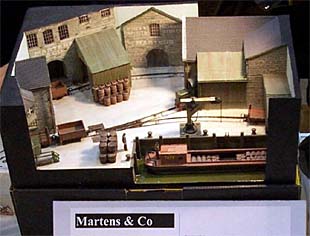 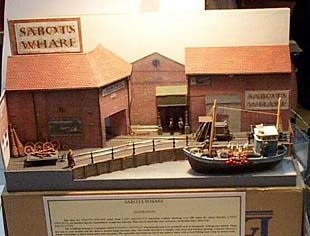 Sabot’s Wharf
by Chris O’Donoghue (right)
This one follows the design of Carl’s Imports very closely with the sector plate at the left rear. Both buildings and boat were modelled after actual English prototypes. 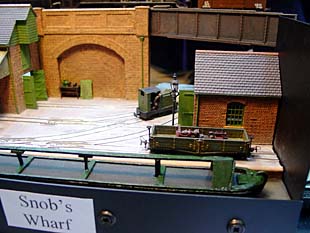