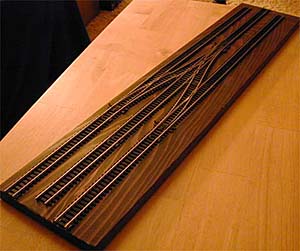 There are lots of ways to pour trackage onto a shelf switcher, and doodling shunting layouts is a great occupation for a rainy afternoon or a long train or bus ride. Here are a few of the infinite number of possibilities.

Above left–On a 9″x36″ (23×90 cm) bookshelf, I arranged some Peco HO/OO turnouts and Atlas snap track to make this intricate-looking but basically simple triple tracker.

Above right–Emrys Hopkins runs the idea right into the ground with this remarkable aggregation of turnouts and track in slightly less than 1X3 ft (30×90 cm).

If you doodle a dense shelf-style plan that you like, send it to me, and we’ll add it to this section of the Gallery. (Click ‘Comments?’ at the bottom of the column to the left.)

In a sort of Search for the Ultimate, Chris Gilbert has managed to stuff an amazing amount of trackage into a 12″x48″ (30×120 cm) TymeSaver — all using standard Peco turnouts (albeit, some are trimmed to fit). There’s an immense amount of operating fun in the Short Long Way Round RR, and finding it will be left as an exercise for the reader. Your first task will be to find out how to run around your train! Chris suggests using two locomotives–it’s easier than trying to remember where the runaround loop (passing siding) is. But we guarantee there’s one in there!

Bart Bakker, an experienced model railroader from Utrecht, Netherlands, was speculating (via email) about the effects of his old layouts on his current modeling activities. As an example, he sent me a 40-year-old sketch (below, left) of a layout he built in his student days. The size of his room only allowed the layout to occupy a small space between two walls — about six feet. 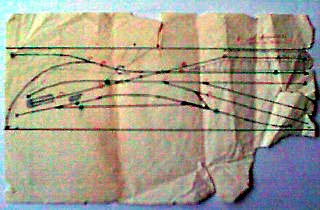 Bart designed a hard-working terminal station in HO scale to fit that space, influenced by Cyril Freezer’s classic book of English track plans, “60 Plans for Small Railways.” The design provided for operating the station entirely within the baseboard, with trains appearing from and returning to the hidden two-track fiddle yard at the left.

Bart felt this design was still valid in the 21st century. I agreed, and have redrawn Bart’s layout as Smalspoor Station to fit a micro-sized baseboard by changing the gauge to HOm (thinking of those delightful Bemo locomotive models now available)!

U.S. modelers could use N scale trackage for an HOn30 layout, although the dense trackage of such a station, with two double-slip turnouts, is more typical of European meter-gauge practice. I have left the fiddle yard out in the open this time, due to the small space. The basic station design continues to work perfectly — including passenger traffic, freight handling (at the goods station), locomotive servicing, and a marshalling and storage yard for train makeup.

Examining his plan of 40 years ago, Bart was struck by how much his present layout designs were influenced by this layout and another similar one from even earlier times. “Looking at the plans,” he wrote, “I subconsciously seem to have integrated both track plans in Q-FORD Interchange, my current FREMO modules. But I can document that the Q-FORD track plan was derived directly from the official track plan of Coevorden station, near the German border. Remarkable!”

Thinking about it, I was surprised to see how much my own early layouts resemble the models I like to build now (for example, see my North Pole Railway from the 1960’s). It appears that our tastes in railroading run deeper — and far longer — than we might expect.

Many thanks to Bart Bakker for stimulating this “train of thought”!

How to Fill a Shelf With Track!

The Works layout is well named … it covers just about every available space in a four-square-foot bookshelf with track and structures related to the theme: a busy locomotive repair shop. Connected by a traverser (transfer table), the entire complex is devoted to “repairing” your fleet of locomotives, thus showing them off to the delight of your onlooking fans.

Rolling stock enters from behind the giant Repair Building, on a hidden Fiddle Track (good idea to have a rerailer at this point). Bumping onto the traverser, it is whisked sideways to its alloted destination … perhaps the Loco Shed, or the gantry crane where superstructures are removed from chassis, or perhaps into a slot in the Repair Building itself. The loco may move under its own power, or you may need to use a “roundhouse goat,” a small but husky loco to move around the behemoths. Putting the switch engine in the right place to shove the loco into its assigned slot may require some serious advanced planning!

There are lots of ways to display your prized motive power–either steam or diesel or both, depending on your chosen period. You can even show them off in “finished condition” on the Parade Tracks, where they’re tested under power. How do they reach those tracks? You’ve guessed it, I’m sure … there’s a small traverser (or perhaps a sector plate) inside the Repair Building that allows locos to move from the third to the second track from the front! This subterfuge is actually prototypical, and you may want to leave the front side of the Repair Building open to show it off … and to give you a chance to build some superdetailed scenery inside the building.

Layout Designer Vincent Wesstein suggests that you might want to consider using DCC control for this layout, small though it is. That way, you can independently control a large number of locomotives at once — creating a symphony of motion! All told, The Works contains the equivalent of over a third of a scale mile of track, all devoted to displaying your locomotive fleet in a well-detailed scenic setting that even provides some operating challenges. About as much as you could ask from four square feet of layout!
Pouring on the Track sections!

Pouring on the Track sections!

Expanding hiis original design even beyond Emrys Hopkins’ TF Industries II layout, Jack Trollope has filled a 48″x12″ shelf with about as much track as the average micro enthusiast would ever want to have — producing TF Industries III (the ultimate sequel).

“TF” stands for “Traverser Fed”, and the secret of this layout is the two-road traverser (transfer table) concealed within a factory building at the left rear. Accessible from the back, this hidden fiddle yard provides a continuing stream of HO or OO cars and wagons to meet the insatiable demands of the industries that surround this little industrial yard. It also provides several means of running around a cut of cars to switch a facing siding.

Notice that Jack has also preserved the characteristic TF pattern of the traverser forming the head shunt (yard lead) for an Inglenook fan of three sidings — in this case, created by a three-way turnout. Thus, shunting games can be played here, as well as hard-working switching chores.

Trackage is easy to build — it’s entirely standard Peco short-radius turnouts and wyes along with the three-way switch and some flex track. For those who love to solve switching problems or to play chess-like shunting games, TF Industries III is about as close to heaven as you can get in a 1’x4′!
Invisibility … the ultimate scenery compression!

Is it possible to have too much track? I think it is, and one of my complaints about many of the track plans I receive is that often they’re drawn to show off a particular track pattern, with no regard for operation or convincing appearance. But there is a way to handle that problem (in some cases).

Take a look at this knot of trackage caused by jamming together Peco double-slip and three-way switches and throwing sidings off in every direction. Here’s the plan as I originally drew it, with no scenery or operating scheme:

At first blush, it looks pretty silly, doesn’t it? Rails everywhere, with no room for scenery and no sign of an operating scheme. I get a lot of these in my email, and I usually reject them. But wait!

I was reminded of a possible remedy the other day by an email from Iain Climie, in Hampshire, England. Iain had independently “invented” the idea of running an extra industrial siding from a station off to a hidden fiddle yard, thus creating an invisible but highly productive source of traffic (Iain’s concept has since been posted elsewhere). I also remembered a piece in Model Railroader magazine back in 1980 that referred to this stunt as the Ultimate Compression, where a giant industry could be functionally represented but not modeled! All you see is the factory gate with a track running through and disappearing behind the scenery.

All those thoughts led to Triple-I Industrial Park — a layout that runs this idea right into the ground by depicting a knot of trackage that services at least four major industrial enterprises — none of whom appear on the layout board! “Triple-I” stands for “Invisible Industries Inc.”

This layout is designed for U.S. style HO gauge 40-foot cars and a road switcher c. 1960, but it could be set in nearly any country where industrial parks are found. Extend the baseboard to 56 inches, and you can use current-day locomotives and 50-foot freight cars.

The morning switching run arrives from a convenient cassette on the middle track at the right, and pulls through the three-way and double-slip switches. The road engine (a venerable GP9 perhaps?) uses the hidden sector plate to complete a runaround capability in the process of distributing cars to the various industries in the Park, and picking up the loads and empties on its switch list.

There are four basic industries represented by their gates at A, B, C, and D. The industries themselves are off in the distance, behind the green screens of trees and shrubbery or even all the way off the layout. None of them is modeled. Cars are shunted to the correct tracks and hidden behind the greenery, where they can be surreptitiously removed and replaced with empties and loads to be picked up. All the sidings hold at least two 40-foot cars, so there’s plenty of capacity for switching maneuvers.

You can name the industries anything you like. Here are my choices — A is Imperial Vacuum Corp., who ship their intangible product in sturdy tank cars. One of their best customers is at B, Devine’s Donut Hole Co., an enormous and fragrant bakery. C is the owner of the park, Invisible Industries, Inc. They have a tall office building right next to their gate, but the plant itself is “down the road a piece”. The office also has an internal track for inspecting incoming freight classified “Secret”, as Invisible Industries does a large amount of government contract work that is all shipped in shrouded freight cars. And D is the M-T Explosives Works, whose gate office is primarily there to keep visitors off the premises for their own protection.

All of these imaginary industries are major producers and shippers, excellent customers of the railway and richly deserving of the extra trackage the company has purchased in order to serve them more efficiently. Perhaps if you have a “plate of spaghetti” layout, the tricks used here might help!

Addendum: Shortliner Jack Trollope, from the Highlands of Scotland, points out: “The Road-switcher, as you suggest leaves the inbounds on the “industry leads” for later collection by the imaginary plant locos. Later, when you are ready for the outbound moves, the same cars are treated as outbounds that have been left there by the plant switcher. This is almost the opposite of the usual “Interchange sidings” idea where the layout concentrates on the plant trackage, and imaginary Mainline freight trains supposedly drop inbound cars for the local switcher to handle and, equally supposedly, take the outbound cars away, with you operating the local switcher. Here you are operating the Mainline!