Tynyport Dock is a “micro-sized” version of a larger design by Giles Barnabe. Anything lost in the translation is entirely my fault. The layout, writes Giles, is “very loosely based on a colliery [coal mine] line in N.E. England, though here converted to narrow gauge. It includes elements of the “Fish-hook” and Inglenook designs, though the track plan’s flyover loop and various levels disguises them slightly.

“Trains of loaded wagons arrive through the tunnel and run into the tail track (left centre). From here they are shunted into the holding sidings within the loop until the tippler is ready. Then short cuts of wagons are taken out, run over the wagon scale and then propelled round to unload in the bunker which in turn feeds the ships using the dock. Vollmer and Fleischmann make working tipping sets in N gauge, and these could be modified to HOe/HOn30/OO9 to make the layout fully operational.

“Trains arriving from the mine exchange wagons at the central storage sidings and return to the mine [the cassette fiddle yard] with the empty wagons. Dockside shunters switch the tipple roads.”

Giles has concocted a realistic and appealing colliery line, which can also provide interesting scenic opportunities due to the various levels of train operations. Mnimum radius is 7 inches.

Terry Allen specializes in small tramway layouts, with four-wheel trams (trolley or self-propelled cars) for passenger traffic and small shrouded steam locos (dummies) for goods (freight). Here’s a busy example, the 4’x1′ Quayside Tramway in O9 (On18) or perhaps in O16.5 (On30). With a careful choice of rolling stock, it could even be built in OO or HO standard gauge!

The viewer is standing in the middle of a waterway, with the front of the layout being decorated as the quay (wharf). Small trams and short trains of goods wagons appear from the Fiddle Yard (behind the tall quayside warehouse building).

And animated action areas abound! A traverser (transfer table) makes for some interesting stock movements in the small yard. And a wagon turntable right up front adds extra interest to the industrial shunting activities. A working Tipper Chute at the left provides a good destination for open wagons or skips and if made into a working facility gives still another spot of animation to the layout.

All in all, this quayside is a very busy place, as befits a small but active port town. If you like to build tiny and unusual rolling stock, including trams, this is a great layout for showing them off! 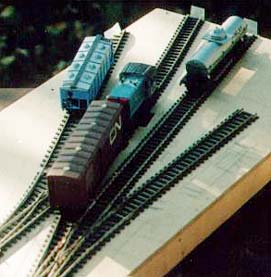 Lilliput Quay was designed by Ian Bareham as a smaller-sized version of his Lilliput Pier and Alderman Quay layouts (Model Trains International 35). It’s a small dockside switching layout modeling a small yard which can be found at virtually any port in the world. Based on his firsthand observations of the Ipswich waterfront, Ian designed this layout as an HO line set in Modern Vancouver. He has also considered setting it in early diesel era Ipswich … or even in Chile.

Ian’s original design was 36″x18″, a bit large for a micro layout but providing him plenty of room for the kind of waterfront structures and scenery that make a dockside layout so attractive. I have taken the liberty of squeezing the width a bit, down to 13″, to allow a slightly larger fiddle yard and still be under four square feet, the size limit for a micro layout. Any losses experienced in this process are completely my fault.

The layout photo shows a mockup of the trackage that Ian put together to test the concept. For the modern Canadian version of the layout, he uses small Model Power Porter Hustler diesel industrial switchers. The two switch leads must hold at least a Porter and one car, either a CN grain car or a 50-foot box car.

Planned structures include a baker (flour mill) and maltings hiding the entrance hole from the fiddle yard, a cannery on the dockside, plus an oil depot and grain elevator on the kickback siding.

Photos below show the kind of waterfront scenery that Ian has in mind. He shot these on recent visits to the Ipswich waterfront. At the top left is some appealing Quayside trackage; at the top right is a typical small yard scene of the sort that inspired this excellent layout design. Bottom left shows the Ipswich wet dock, and bottom right is the Stoke Bridge entrance, now, alas, demolished. 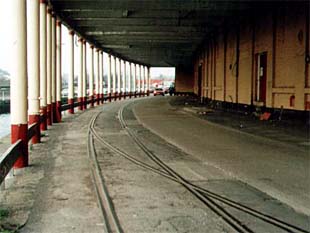 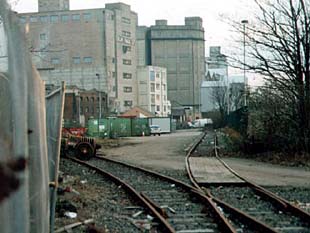 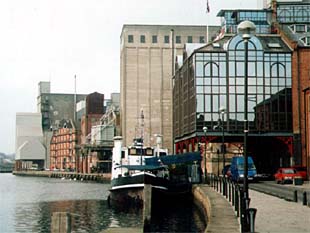 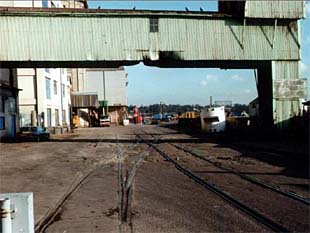 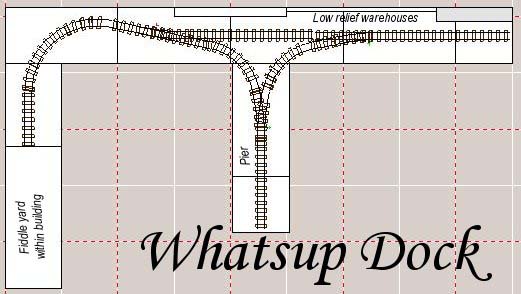 Another approach to dockside modeling comes from the fertile brain of Emrys Hopkins. He envisions a Gn15 track plan made up mainly of 12″x6″ tiles, joined to create a long but narrow waterfront shunting layout, Whatsup Dock. Total area of the layout itself is exactly four square feet. Total footprint area occupied by the layout, though, is 54″x30″. Red divisions on the drawing are one-foot squares.

Emrys suggests that “this could be a corner layout, with the pier section being attached only when the layout’s being operated — perhaps folding down out of the way when not in use.

“The scene is a dockside, with tall, imposing warehouses in varying degrees of low relief at the back of the layout. Within a large building to the left is the fiddle area… There’s plenty of opportunity for working cameo scenes on a busy dockside — winches raising and lowering crates, a worker on his lunchbreak casting a fishing rod into the dock, and the like.”

Operations can be as complex as you wish, depending on how many cars you place on the layout at one time. Basic operating scheme is to bring a train from the Interchange point (fiddle yard) that requires shunting its cars into both the Pier and the Warehouse sidings. Any cars presently in those positions must be collected and returned to the fiddle yard. Car shunting assignments can be generated by computer or drawn from a hat.

An Effective Display for Your Trains

The train-length, three-track traverser (transfer table) hidden away at the rear can feed a wide variety of trains onto the oval “circuit,” and they can amble through the countryside for a long time without much repetition. There are some switching spurs for those moments when the shunting mood strikes; and the spurs are arranged as an Inglenook fan, so switching puzzles can also be run on this versatile road.

The three-way lap switch is from Peco, and represents a worthwhile investment as it’s the only turnout on the layout! Scenery shown is the original design, which was created for a gentleman who lives in Maine and naturally models seacoasts and fish factories. You can easily change it to suit whatever part of whatever country you wish to model. Making the crane a working model might be an interesting engineering project for next winter!

This slightly-advanced railway is well within the capability of almost any model rail to build. It makes very effective use of a few simple layout elements to gain great operating impact. As a note, the larger-scale version used 10″ radii (smallest practical for 1.75″ gauge tracks) and measured 4.4’x3.3′. The operating potential was about the same.

Tram to Serve an Island Industry

James Island, an isolated place along the Pacific coast in British Columbia, Canada was home in 1915-1979 to the Canadian Explosives Ltd. plant for manufacturing TNT and other military explosives. A narrow-gauge railway featured 12 miles of track and moved raw materials and manufactured product to and from the shipping facilities and around the plant complex. The railway featured an incline and hoist up a sheer cliff about 100 feet above sea level to move both cars and locomotives between the raw materials dock and the plant (see artist’s rendering below, looking down from the top). 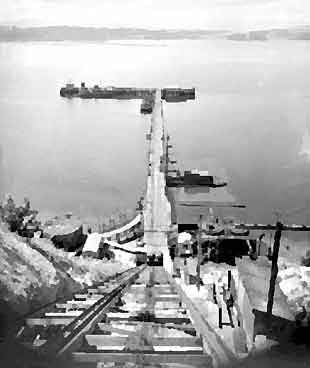 Brian Wilson, who lives in British Columbia about 3 miles from the island, has designed James Island Explosives Plant to capture the feeling of the raw materials dock, incline and hoist, and the clifftop scene.

As drawn for On18/O9 scale, the layout is somewhat larger than most of the micros in this Gallery. We’re including it here because it definitely is designed in the spirit of micro layouts — focusing on a single area of intense operational interest — and because it would be easy to make it smaller to meet the micro size criterion of four square feet in area.

The hoist is the focus of interest, and Brian plans to build it as a working model (perhaps he’ll provide us with the details later!). At the clifftop, three sidings offer destinations for loaded cars. Notice that both upper tail tracks of the wye will hold a locomotive and at least one car, allowing convenient shunting of any of the topside sidings. Adding a cassette at the right side of the clifftop (behind the Power House) could represent the offstage powder dock, yet another switching destination.

An optional cassette is suggested for the lower level, to extend the raw materials wharf for additional switching operations and for introducing newly-arrived cars onto the layout. Rolling stock can be highly varied, but will mostly be short, industrial narrow-gauge stock. The real-life railway used Porter steam locos, Davenport diesels, and electric locomotives at various times in its history.

This layout can be constructed in almost any scale, from HOn30/OO9 to Gn15. Trackwork and switches will probably need to be handlaid, unless somewhat more room is available to accommodate commercial turnouts.

By the way, the explosives plant was removed completely after 1980, and the James Island is now privately owned. If you’re interested in buying it, the owner has put on a price tag of $49 million USD, which includes a Jack-Nicklaus-designed golf course!