Robert Michael describes operations at Hylton this way: “The idea of the layout is a small urban terminus on the end of a short branchline from the main line. Most goods (freight) traffic is handled at Hylton Junction station (represented by the hidden Fiddle Siding), where there is a large goods yard. A small amount of goods traffic is handled here at the Town station, due to a factory located next to the station (its loading dock is modeled and the rest is depicted on the backscene). Trains would be mixed if modelled before about 1910, or seperate goods and passenger afterwards.

“Passenger stock would be compartment stock on such a short service. The station can accept one 60ft coach along with tank locomotive at any one time. The occasional mainline corridor coach may make an apperance, having been ‘slipped’ from a passing express at the junction.

“On the left of the layout, the headshunt has a small amount of loco facilities — a coal stage and a water crane in steam days, so the tank engine can rest here between dashes to the junction and back. If the line were modelled in the diesel period, the yard shunter from the junction station would probably work goods wagons up to the town station, and the passenger service would be provided by a single car DMU.

“The scenery, as befits an urban area at least in the U.K., is mainly brick retaining walls and roads. The main overbridge includes a parade of shops on one side of the road, whilst the station is reached via steps down from another road (only partly modeled). There is a back scene along all sides except the front, featuring a typical English semi-industrial landscape (for example Peco SK45 and SK46).”

As only standard turnouts (points) and track sections are used (either Peco or Hornby), the layout goes together quickly, and scenery can easily be added to this busy bookshelf line.
And a U.S. version…

Not to leave U.S. modelers out of the fun, I’ve redesigned the layout to use standard Atlas Snap and Custom Line track sections. This version, Milltown, represents the end of a short branch line somewhere in the Midwest. Scenery is rural — the industry next to the station could be a grain elevator or a light manufacturing plant. The Fiddle Siding can disappear into a small woods, with farmland on the backdrop. If you plan passenger service, it would likely be provided through the 1950’s by a single battered-looking combine or coach attached to the daily mixed train, and later by an RDC car.

As the Atlas turnouts all have insulated frogs, only two electrical feeder wires are needed, and they can be attached to the rails anywhere on the layout. Milltown occupies a 63″x8″ (1600x200mm) bookshelf. 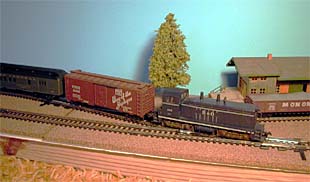 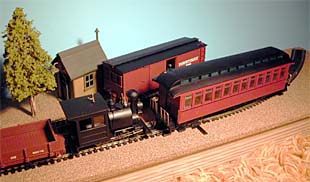 In the HO version, the 9:18 a.m. mixed train pulls into town with one boxcar and an old 60′ combine behind the SW7.

In On30 a Bachmann Porter shoves a coach into the station track. This layout can work well in narrow gauge!