“The Fork” — Using Just One Switch

One of the first micro layouts I ever encountered was this one, featured in Dick Andrews’ narrow gauge column in Railroad Model Craftsman during the 1950s. He built the little On2 line on an 18″x24″ drawing board, and it embodies the idea of The Fork perfectly. The line begins at the left side, where it interchanges with a short section of standard gauge track–about long enough to hold a single boxcar! The little narrow gauge train pulls out of the interchange track, past the small turntable that substitutes for a track switch to reach the “yard track.” The train continues through one leg of the line’s lone turnout and runs a short way up the Switching Lead. Then it reverses, the brakeman throws the points/turnout, and the little train proceeds up Big Hill, rounding several “muleshoe” curves, and eventually arrives at the Quarry with the locomotive on the downhill end of the train–just as good prototype practice would have it! That’s The Fork…a simple way to use a single track switch to work a railroad in prototypical manner, with the locomotive always on the correct end of the train — and no runaround sidings are required at either end! Andrews was quick to note that this arrangement of track was not just a modeling stunt–there were several prototype short lines that used this exact style (though usually with a few more switches at each end of the line). In particular, he singled out the Huntsville & Lake of Bays Rwy, a portage tram between two lakes that switched back on itself midway between its two steamer dock termini. The little line used tiny 0-4-0T Porters (which it sometimes double-headed), and its regular consist included a flat car for canoes. Many thanks to John Thomas for recalling this historic little model pike to me!

Many years ago, I was so impressed by Dick Andrews’ revelation of The Fork that I built one for myself (and my three sons). The line is described elsewhere on this site. The basic job of the North Pole Rwy. was to bring carloads of toys from the Toy Factory around the bend and over to the switching lead, then back up into the Crane siding for offloading onto large freight sleighs (not modelled) that carried them around the world. From a designer’s point of view, the lesson here is that the legs of The Fork can be almost any length, depending on your space and the job to be done by your railroad. 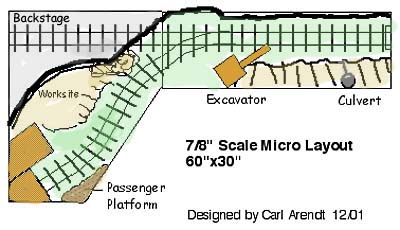 Because The Fork allows true-to-prototype operation in a very small space, it’s also a good choice for use with very large trains. This is a “micro” layout I designed to provide a winter home for garden railway rolling stock in 7/8″ scale. These are REALLY BIG, heavy models. A tiny “critter” loco hauls a skip or two from the hidden fiddle yard at the upper left to the online excavator (shovel), where they’re loaded with sand or gravel fill and pushed over to the worksite at the lower left. A manual dumping mechanism tips the aggregates into a concealed chute that returns them backstage ready to reload the skips. A small railcar hauls workers and occasional visitors around the little layout. It’s a simple, backwoods industrial outfit, and all operations are done by hand–your hand. You can experience the heft and realism of these giant models closeup, while you perform all the operations of coupling, uncouplling, bending the switch, loading and unloading the skips–just as those operations are performed on a small, one-man railway. How prototypical can you get? It might be fun to work in a track crossing somewhere along the line. It’s a great kick to listen to the cluck-cluck of the wheels as these heavy cars rumble over the frogs. And of course, on a small layout like this, sound effects are easy to add! 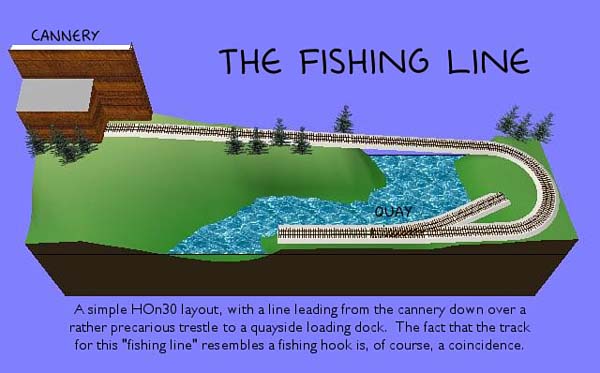 Emrys Hopkins has planned The Fishing Line in HOn30/OO9 to represent a tramway carrying fish in various states to and from a cannery and a quay. This line makes good use of The Fork formation for its trackage, with plenty of room left over for scenic splendour. Emrys describes the design as follows: “The plan was drawn on a 4′ by 1′ grid (120×30 cm) for 9mm gauge track. The rise is pretty steep … the cannery’s 4 inches (10 cm) above the quay, which is 1 inch (2.5 cm) above the water level, and the minimum grade is about 5% … nearer 8% on the long drag. The loco, of course, is always on the downhill side of the train, to avoid runaway cans.” Operation is similar to the North Pole Railway, with the added complication of a steep grade and an ultra-slow-speed trestle to negotiate. Some builders might also want to add a few meanders to the long straightaway up to the cannery. Scenic opportunities in this little layout are spacious. Needless to say, the steepness of the grade can be adjusted up or down, to taste. A small corner of France… 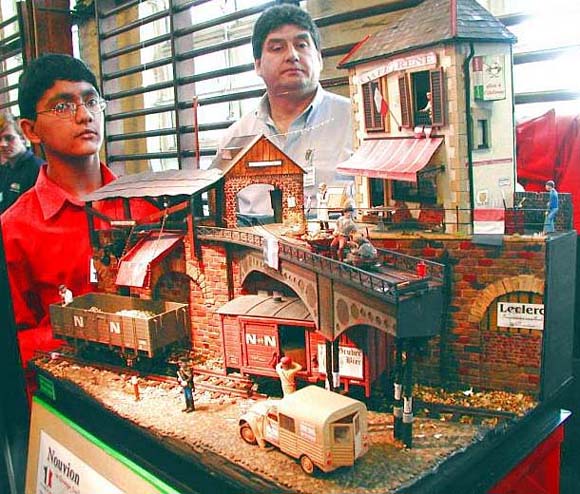 Steve Pearce and his son, Sawood, (shown here) took home the trophy from the 2002 Chelmsford MRC French Connection narrow-gauge competition with this new layout, Nouvion — a G-scale dual-gauge extravaganza based on the hit BBC TV comedy series, “Allo, Allo” from a few years back.They’ve produced a small fragment of France served by a fictitious metre-gauge line, the Chemin de Fer de Nouvion et Normandie. Regular viewers of these pages know that I have a fondness for whimsical model railroading. So perhaps they will indulge me in displaying more than the usual number of Terry Allen’s photographs of this delightful layout. It’s a pleasure to see! A few modeling notes: the G scale metre gauge wagons are Chinese, suitably painted and lettered. The 38 cm tramway (15″ gauge, or Gn15) is served by a loco and automatic operating tipper wagons scratchbuilt of tinplate and scraps, running on16.5 mm metals. Buildings are all scratchbuilt, with brickwork and stonework cast in Plaster of Paris (what else?). Followers of the original TV show will find lots of nostalgic details! Here are more of Terry’s excellent photos. 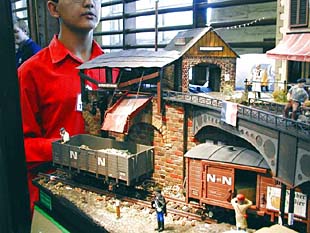 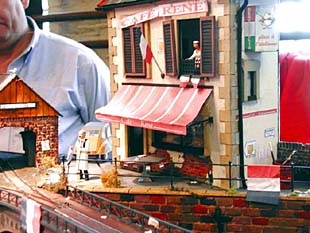 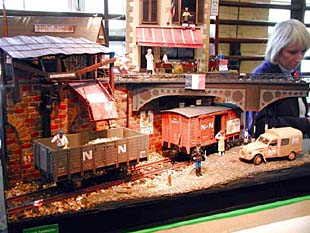 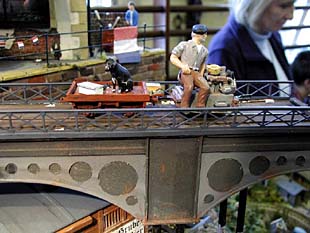 And, oh yes … here’s the track plan. It features a working tramway, using The Fork arrangement.

The OSSJ is a timber and ore hauling road set in Sweden in 1950. It takes its name from the towns it connects — in English, the name would literally mean something like “The Upperswamp-Trunkvillage-Lakecastle Railroad”! Rolf Emanuelson constructed this 1:87 pike running on 9mm gauge in an IKEA CD tower set on its side. A little over six feet long but only six inches wide, the little line connects uplands sources of timber and ore with the nearest seaport by way of a central switchback. The whole design is a perfect example of The Fork plan in action. Rolf’s son, Johan, explains the railway’s history this way: “The railroad was established around the turn of the last century. Its purpose was to provide a reliable transport route for timber and ore from Ovanmyr, standing on high ground, through the woods down to the export harbour of Sjöborg. The vast natural resources of Sweden were at the time serving the expanding British industry. At Stamby, the trains change direction to continue through the tunnels at Bergås towards Sjöborg. There is also passenger traffic between Stamby and Sjöborg.” Rolling stock is by Tillig and scratchbuilt by Rolf. Incidentally, the act of writing the railway’s history — which Rolf and Johan did for this publication — has given Rolf an idea for his next layout, which will be set in the harbor town of Sjöborg!