This tiny, self-contained Brickworks Rwy uses two-axle critters for motive power and a fleet of four-wheel cars — skips for raw material and bulkhead flats for finished bricks. The railroad hauls bricks from the kiln to the yard, and then to the interchange track for shipment on the standard gauge. It brings in skips of raw clay from beyond the yard to the clay hopper and dump.

Brickworks are inherently interesting prototypes, and this little pike provides an excellent opportunity to super-detail a working industrial landscape in a very small space. The somewhat-larger original layout, on which this version is based, was designed by the late Alex Ceres around 1967. Many thanks to Jack Matson, who posted his friend’s drawing and brought it to our attention.

Another industrial tram, designed in the mid-Sixties by the late Alex Ceres, was this lime kiln HOn30 tramway in 2’x2′ (60×60 cm), the Specialty Lime Kiln Co. This one features a full operations menu, including bringing in raw materials and fuel (usually limestone and coal), charging the kiln from above, removing the lime at the bottom and hauling it to the cement plant, and loading standard gauge cars with both product and waste.

This layout abounds with opportunities for superdetailing and creating a very busy and believable little industrial scene. There’s even a street railway with a trolley moving back and forth to bring the workers to the site!

Many thanks to Jack Matson, who forwarded his friend’s track plan. The artwork shown here is Ceres’ original sketch–but color and typography have been added for clarity.

Dominion Geolite Co. is a complex On18/O9 industrial micro layout designed and being built by Ian Campbell. It’s a 17″x22″ (430×560 mm) model of a WW I era explosives plant, purposely designed as a showcase and testing ground for industrial modeling and animation techniques. Several additional modules will complete this large, historical factory.

The geolite raw material (sand) follows the production process from the dumping shed (front) onto a conveyor to the separation plant with its upper level settling tanks. The tanks release spoilage to the lower level and good material to the upper level where the “manufacturing process” continues. In this model version, the sand is ultimately returned in skips to the dumping shed to begin the process all over again.

Ian has currently completed about 40% of this complicated working layout–the basements and ground floors of most buildings are finished, the lower level track is in place, and he’s working on the animated car elevator. We’re looking forward to periodic progress reports of this very-advanced industrial tramway!

Ian also serves as the moderator of the Model Industrialist e-group.

Ian Holmes created this innovative plan, The Brewery Line, inspired by photos of Dublin’s Guinness Brewery Railway found at Steve Thomason’s website. Although not copying the original, Ian has captured in 28″x24″ (71×61 cm) the essence of this wonderful 22″ gauge prototype. Like its inspiration, this micro railway runs in and out of the brewery buildings carrying barrels, raw ingredients, and general supplies for the entire process of brewing and shipping Guiness’s famous product.

The line can be viewed from all four sides, each of which offers a unique look at the operation inside and out. As drawn, with six-inch radius curves, the layout is designed for On21 — 7mm scale on 12mm gauge, using scratchbuilt rolling stock running on standard European TT gauge wheels and track. Many other narrow gauge scales are possible. Small, cabless diesels and narrow cars are the ticket here — the line squeezes in and out of the stone and brick buildings, with very tight clearances.

For scratchbuilders, a challenge might be to model the original, unusual 0-4-0 steam locomotives, which piggybacked on a special converter chassis to run on the 5’2″ gauge railway that served the brewery from outside. Truly a unique interchange!

Another challenging project might be to rig an old turntable under the baseboard and slowly rotate the entire layout, so the artistry of each scene could be viewed as the little trains ply their trade. Incidentally, Ian has arranged things so a train running end to end on the tiny line will travel about 92 inches — nearly 8 feet. Stout fellow, Ian!

Apple Valley Farm Supplies is a tiny layout for a big scale — Gn15 in just over two square feet! Ian Holmes designed this little jewel to work as an Inglenook switching line bent into a U shape…so the trains have somewhere to go (behind the backscene).

Operating possibilities are strong, using any of the many index card switching systems. Lush, rolling farmland makes for good scenery opportunities, and the possibility of lincluding freshly plowed fields opens the layout to aromatic modeling opportunities as well! 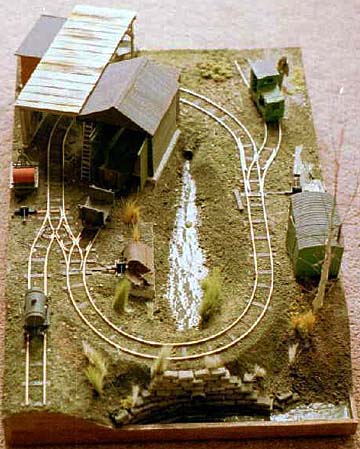 The Beltane Wood Railway is just a few millimeters larger than an A3 sheet of paper (297×420 mm or 11.7″x16.5″). Kevin Payne built it as a “bookshelf display on which trains trundle slowly around.”

Track is handbuilt using Roy C. Link templates to O14 standards (British On2 at 7mm to the foot). Rails were soldered to PCB sleepers (ties). Structures are wood and corrugated tinplate, with cast concrete represented by plaster.

Kevin explains, “There isn’t really a story behind it, although it could well be part of a primitive industrial tramway serving a brickyard or quarry. I have no idea who the woman waiting at the back of the shed is, or why she is there. I was photographing the ‘Buzzing Bee,’ a Grandt Line speeder with suitably narrowed track gauge, and I didn’t notice her when I clicked the shutter.”

Operations on this tiny layout can be interesting when the spur at the upper right (in the overall layout photo) is treated as an interchange track where freight and supplies for the industry are shipped and received. The tramway’s job then is to move the cargo from the interchange to the mine/brickworks/whatever. With sidings leaving the line in both trailing and facing positions, the little locomotives must use the track circuit to run around the train in order to shunt facing spurs. So things can become intricate at times!

P.S. The name comes from the day that Kevin dreamed up the idea of building this little gem! 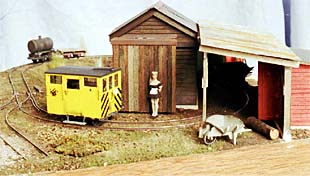 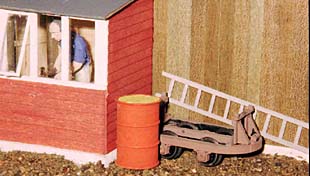 A ‘Sheet of Paper’ Layout

Geoff Perkins, from Brisbane, Australia, has concocted this delightful little industrial tram that can be built in HO or OO narrow gauge in the space of a sheet of A4 paper — 297x210mm, about 8-1/4 x 11-3/4 in! The scene depicts one side of the Perko Paper Products factory which is based, says Geoff, “on a paper recycling plant where raw materials come in and are processed into bulk rolls that are then carted off to another part of the plant or to a transfer facility for road or rail transport to other places.

“Raw materials coming in would be bales of waste paper for recycling and coal for the boiler. Materials out would be the bulk paper rolls.

“HO or OO narrow gauge would be used. The headshunt over the coal drop and the train turntable at the rear would need to be long enough to hold a loco and two small wagons. The loco would be a typical 4-wheel battery/petrol/diesel and the wagons would be 4 wheel flats for the paper bales and rolls and 4 wheel hoppers for the coal. If wanted, an ash conveyor could be worked in to remove the waste from the boiler as well, which could be dumped into another hopper wagon for removal.”

The tricky parts of constructing this line would be hand-laying the tram-style track complex of two turnouts and a crossing at the front, as well as concocting couplings (and uncouplings) that will stay together on the layout’s 8 cm (3 in) curves.

There are lots of opportunities to create variations on this clever design. For example, I’d like to see the wagon turntable operating out in the open — although that would require a second locomotive to pull the turned cars into the factory, and later to replace them on the turntable. I dug out some HOn30 industrial rolling stock and dropped it onto a full-size printout of Geoff’s original layout drawing, just to see how a two-loco layout looks. 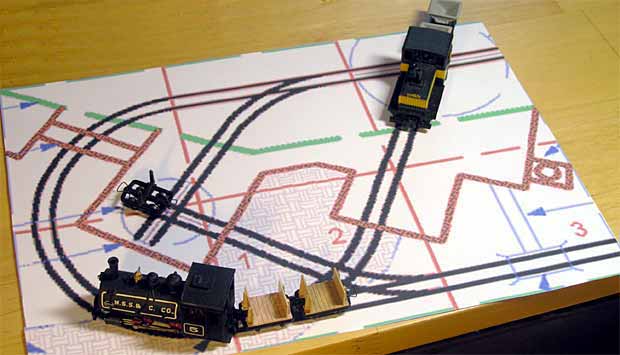 I also mentioned to Geoff that I’d like to see an On30/O16.5 or even a 1:32 or 1:24 narrow-gauge version of this layout … it could be made in about a 28×20 inch space (70×50 cm) — still a micro-sized layout! And I’ll bet you can also think of some other variations to suit your taste — all of which can be built in the space of a single sheet of writing paper!