A popular space-saving device is the sector plate — a track or tracks mounted on a board that is pivoted at one end so it can match up with several approaching tracks. Here are some micro layouts that take advantage of this clever device to provide excellent operating capability. Page 2 of 2.

This Layout is ‘Out of this world’ 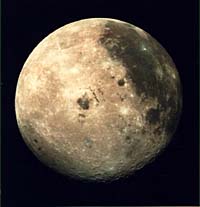 Way back in April 1978, Model Railroader magazine ran a special article called, “A lunar railroad you can model.” Artist Alan Cerny and Modeler Bob Hayden teamed up to describe a futuristic prototype and build a 3/8″ scale model (1:32) of a mining complex on the moon, complete with lightweight lunar Snap Track and robotic gandy dancers!

Now Jeff Semprebon, from Claremont, New Hampshire, has taken the next giant step and designed a complete Lunar Mining Complex, a three-level micro layout including a scale model of the Space: 1999 Eagle transporter (still obtainable in some stores and at swap meets).

Jeff describes his design this way:

“This 9mm-gauge mining micro layout uses a vertical sector plate (orange) to move between a Base Level, a Lower Level (mine excavations), and an Upper Level (processing facility and transfer point). In the particular 1/100 scale (“C9”, I call it) example, the miners are processing water ice deposits in a permanently shadowed region near one of the lunar poles, with the processed water being loaded at the elevated landing pad for shipment via the Eagle to other lunar bases. The lunar surface is represented in grey, and the blue indicates solid areas that would most likely be formed by foam insulating sheet (pink foam should work equally as well as blue).

“This plan puts the pivot of the sector plate off-center, allowing the 3-D sector plate to serve as part of a loop in one position on the Base Level. The loop can then serve (unprototypically) as a runaround track. The plate is pivoted on a long rod, and to move between levels, a sort of “keyway” is provided. The sector plate is moved to a particular orientation to clear the keyway (the plan allows for about 1/8″ (3mm) clearance). The sector plate has a notch in one end that allows it to clear the end of the inner rail on the Lower Level. Note that on the Upper Level, the plate must be lifted to clear the wall of the processing facility if the facility is extended as far to the right as shown.

“Cassettes (red) — at the end of mine shaft on the Lower Level and in the processing facility (yellow) on the Upper Level — can be switched to provide an empties-in/loads-out type interchange, with empty ore cars loaded onto the cassette in the mine shaft and exchanged for full cars that have been dropped at the processing facility. The sector plate could be moved to the right a bit if a longer cassette is desired, at the expense of increasing the grade up to the transfer point.”

Needless to say, this LMC layout provides a wide-open opportunity for ingenious design of locomotives and rolling stock, as well as of most railway accessories (don’t forget those robotic gandy dancers!). You could, if you wish, shift the locale to a frozen hydrogen mine on Titan, or a superconducting-metals processing facility on Pluto. Or go even farther out, into the Oort Cloud! The only limit is your science-fictional imagination. Have fun!

Here it is at last — a G-gauge railroad made with standard Aristo-Craft or LGB track sections that fits within the four-square-foot footprint of a Micro Layout. Now you can have BIG trains in the space of a bookshelf! This fully-operating layout uses a track plan originally devised to squeeze small-scale working railroads into a shoebox. That plan is described under Carl’s Imports. 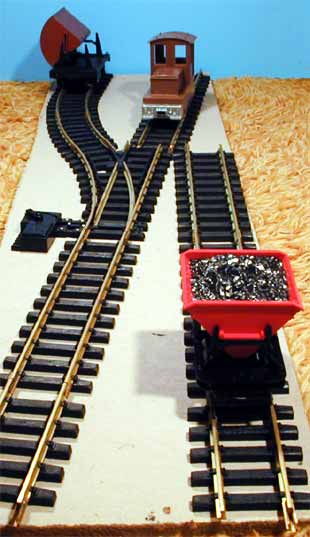 This special G-scale version is called Carl’s Exports. This little railway performs the vital task of moving loaded skips (ore cars) and other small wagons from the tipple (top right) to the unloading point at the harbour or to the loading dock. This may appear to be only a few inches travel as the crow flies, but to this hard-working little line it’s at least twice the layout’s length away!

At left is a quick feasibility study made using Aristo-Craft trackage, assembled on a 1×4 foot piece of Homasote to make certain these big trains will fit into this tiny space. As you see, they fit very comfortably!

The four-wheel switcher, being bashed from a Roundhouse Big Hustler diesel kit, is sitting on the 18″ sector table — just long enough to hold the loco and one four-wheeled car. Rolling stock for this little line will be assembled from LGB and Hartland four-wheeled industrial or “feldbahn” cars.

The only “trick” to the layout is the arrangement of the tipple, which is open at the back for “fiddling”. To run around a car, the loco simply pushes it from the sector plate under the tipple and out of sight, where a hidden hand lifts it from the rails allowing the loco to run through the tipple to the end of the spur. The car is clandestinely replaced, and the loco then pushes it back over to the sector plate, having successfully run around it!

I’ll keep you posted as Carl’s Exports acquires scenery and permanent trackage. The sector plate will be constructed like the one pictured at the top of this page, in Lesana Yard. 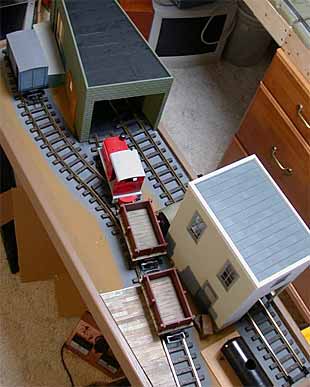 Bill Nunn, from Tucson, Arizona USA, is building a version of the Carl’s Exports and doing a grand job of it, as these under-construction photos attest. Bill has widened the baseboard to 15 inches, to enjoy a little more breathing room around the edges of the trackwork.

Track is stock LGB, and the locomotive is an LGB “field diesel”. Bill writes, “The box car was built from two Hartland Locomotive Works gondolas. All the building siding came from Precision Products. The little dock is made from popsicle sticks. New couplers, completion of the storage tank, and ground cover are in the works.”

The wedge-shaped building at the top of this picture conceals a sector plate, a space-saving substitute for a turnout. Bill’s trackwork and modeller’s tips for building the sector plate were featured in the July 2004Small Layout Scrapbook (#27).

Attention garden railroaders: here’s a way to enjoy some of your G-scale rolling stock all winter in the space of a bookshelf!

Paul Boehlert, who lives in Atlanta, Georgia, recalls his boyhood haunts in upstate New York in this plan, deliberately designed to use HO mainline equipment in a micro layout setting. The Mohawk & Adirondack is set, as Paul points out, “in the Mohawk Valley of central New York and interchanges with the New York Central just outside the picturesque village of Whitesboro. The time period on the railroad is either the Thirties (if I want to run steam-era equipment) or the mid-Fifties (if I’m in a ‘diesel mood’ that day).”

Key to the layout’s operation is the sector plate, which is 15″ long and can hold an eight-wheel road diesel plus a 50-foot railroad car. Thus the sector plate (which is removable and swappable) becomes part of the layout’s runaround facilities as well as a flexible fiddle yard representing the “rest of the world’. 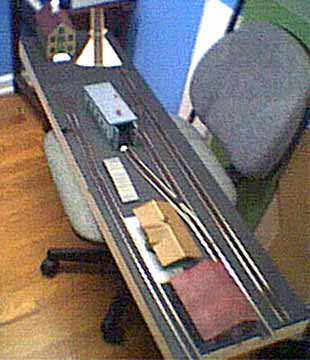 Paul is building the M&A (see progress photo at right), and you’ll notice that as so often happens the track plan has changed somewhat between design and construction! Paul’s notes on the sector plate:

“The plate is a 15-inch long piece of lattice board, drilled for a mini phone plug (mono) from Radio Shack. The corresponding mini jack was recessed into a clearance hole in the baseboard. I glued three lengths of 1/8” strip styrene to the underside of the sector plate to serve as bearing blocks. The plate(visible at the top of the photo) just plugs into the jack, which also carries current for the track.

“Despite my somewhat relaxed standards of craftsmanship, the plate pivots easily and smoothly. Bottom line: I will never again be intimidated by the thought of building a working sector plate. The process really was as easy and trouble-free as I’d hoped.”

Notice that the “plug in” feature of the sector plate means that Paul can have several of them, each holding different rolling stock, and just swap them in and out to arrange for different consists on the layout without handling the rolling stock.

Although this plan could be located anywhere in the world, Paul opted for familiar territory in central New York state. Industries were carefully chosen from those found within a few miles of the real Whitesboro. Paul reports, “The malleable iron plant receives ingots of iron and other metals and ships hinge sets, hasps, brackets and other finished hardware.

“The apple warehouse is very typical of the region, and also distributes produce such as onions and potatoes during other times of the year. Reefers naturally need to be iced to keep the produce cool, so frequent trips to the ice house are in order.

“Varick Freight Company, the team track with its dock, and the M&A freight house can all receive a wide variety of shipments in many different types of cars, adding flexibility to the relaxed operating style of this little layout.”

A bit of nostalgia…

Ian Holmes designed Saltfleet Haven several years ago, as part of his projected East Lincolnshire Light Railway, set amid the grassy sand dunes of his native coastal Lincolnshire. Recently he rediscovered the plan, which was never built, in his files at his present home in Princeton, Minnesota, U.S.A. “Not bad for a prehistoric micro layout!” was his reaction, and we agree!

Ian comments, “Saltfleet Haven is a real place about 10 miles from where I was bought up. Some small fishing boats and pleasure craft are kept there to this day.

“When I was first developing this design (easily 10 years ago) I imagined that Saltfleet Haven had a small, but successful fishing fleet and that there was a need to transport the fish from here to the major port of Grimsby to be transported all over the country. The large warehouse on the plan was inspired by a building that really exists about five miles from the Haven. The smaller buildings I added for somewhere to spot wagons.

“The plan was designed for EM gauge as the 18.2mm track gauge was closer to scale than the 16.5mm of English OO trackage, and all the other layouts I had designed and built for the East Lincolnshire Light Railway were EM gauge too. [EM is a finescale version of Briitsh OO scale, 4 mm to the foot.]

A pioneering design effort, still fresh and interesting. To see what Ian is currently doing in model railroading, visit his website.