Jack Matson has been modeling U.S. Pacific Northwest logging for nearly 40 years. When he saw the Mower Lumber layout, he realized that a simple addition could double the little layout’s operating fun. His version, which I named Matson’s Landing, also doubles the area of the layout.

Jack added a second 9″x48″ micro scene, showing a typical log landing (where the logs are loaded onto the railroad cars) placed back-to-back with a slightly rearranged version of the Cass log dump scene. A switchback track brings the “main line” from the woodsy landing down into the valley. The scenic treatment moves the layout’s location from West Virginia to Washington or Oregon.

Operationally, we can now follow the timber from the woods, at the left, where a small donkey engine is used to load the relatively small (by Northwestern standards) log cars. A Shay or even a small rod locomotive hauls the cars over the switchback line to the log dump at the right. Logs are dumped into the river to float downstream a few miles to the sawmill.

Creating mechanisms to load the cars at the landing and unload them at the river will provide a challenge to your ingenuity. Scenically, the two scenes are separated by a backdrop that runs the length of the layout. Wooden bridges and trestles abound, as they did in most logging outfits.

Obviously, this 18″ wide “bookshelf” can’t be placed against the wall, except for storage. To operate, it must be accessible from both sides. One plan might be to hinge the short top edge to the wall, and fold it upward for storage, like a built-in ironing board.

And bored is certainly something you’ll never be on this active and prototypically accurate logging show! 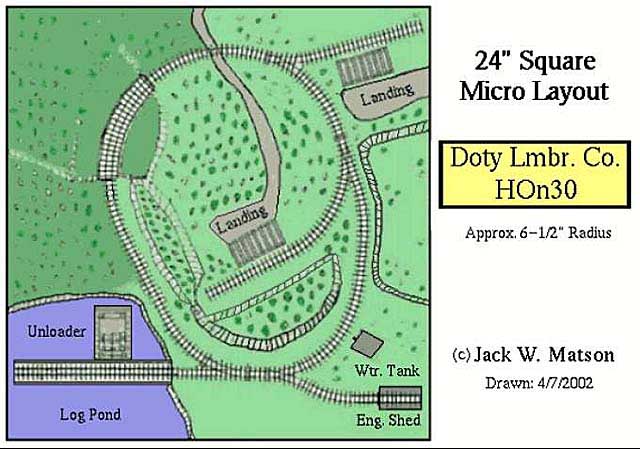 While he was at it, Jack Matson decided to see how small he could actually compress a properly working lumber line. One result is the 24″x24″ (60×60 cm) Doty Lumber Company. He describes the line like this:

“The year is 1921 and the Doty Lumber Co. has just completed trackwork to connect their two dry landings for hauling logs down to the pond where the logs are rafted downstream to the single blade bandsaw mill in the Chehalis Valley located in SW Washington state.

“Doty Lumber opted to choose 30″ gauge as they were able to purchase used rail, a small 0-4-0 Porter, a Plymouth gas critter, and a dozen sets of disconnects for a good price at a bankruptcy sale of a 30″ guage railroad that failed in Northern California.”

By a fortunate coincidence, all that equipment is currently available in HOn30, so he has a good start on building the pike!

The Scene Behind the Sawmill

Jack describes the tiny layout this way: “There is the green chain where cut green lumber is hauled out and either loaded onto flat cars or stacked in the yard to air dry. The lumber that is loaded is either taken to the kiln for drying or transported to market on the interchange track at the far right of the plan. There is also a warehouse for stored lumber or ties waiting to be loaded and transported to market.”

By modeling the output end of the sawmill activity, Jack has created a busy layout with a lot of traffic to handle. Rolling stock would be primarily flat cars, hauled by small steam or diesel lokeys. Ambitious modelers might want to think about building automatic loaders and unloaders for the various operations we find back here. Scenically, most of the giant sawmill will be painted on the backdrop, and most of the available real estate will be taken up with lumber storage yards.

It’s a busy, industrial logging scene, and one that is seldom if ever modelled!