John Allen in the U.S. popularized this form of shelf switcher, comprising a runaround loop with sidings hanging off all the corners. John’s version was called a “TimeSaver”, and it has been duplicated in literally hundreds of layouts over the past 30 years. The rules for the Timesaver game have been published in many model magazines and are available on the Net.

This micro-layout version of the idea is smaller, simpler and more limited, so I call it the Micro TymeSaver. As you see, it’s devoted to distributing and picking up cars from industrial sidings. This version also suggests a stub siding reaching into the backstage area (upper left) to allow fiddling by the 0-5-0 switcher. 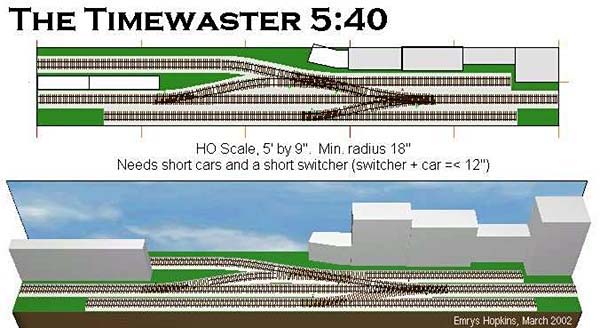 Emrys Hopkins has designed an ingenious variation on the “TymeSaver” theme, called The Timewaster. Designed for HO and OO scales, it’s 60″ long and 9″ wide, making it less than four square feet in area (540 square inches in fact). Using several of Emrys’s pet puzzle switches, the plan is sparing of turnouts but heavy on operation.

For more examples of Emrys’s layout designs see his excellent web page, LayoutDesigns.com. Particularly interesting is his unique adaption of John Allen’s original TimeSaver design to a track geometry that fits an HO plan into a micro-sized 9″x54″ (23×137 cm) bookshelf! All the TimeSaver operational games work perfectly on this tiny Micro Timesaver that uses standard Peco turnouts and could easily be made from Snap Track or Setrack!

Bill describes the layout concept this way: “The basic premise is an upstate NY winery, set along the shore of one of the Finger Lakes. As this is extremely hilly area, the layout is actually set on two levels: the lower level being along the lake shore, with the dockside, and entrances to the wine “cellars.” The upper level is a “timesaver”-type switching layout, with sidings for the bottling loading dock, and the “coopers” shop. There is also a small turntable and engine / repair shed, as well as a small passenger shelter, for visitors.”

Bill has built the lower level, including the tunnels for the wine cellars and is starting on the upper level which is a TymeSaver style plan. 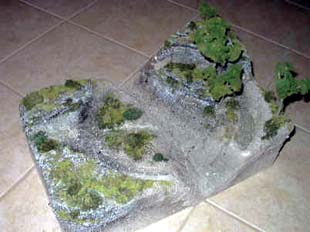 This “Work in Progress” shot shows construction on the Hedgehog Hill, along with some of the rolling stock that Bill has cobbled together by converting G scale items to the larger 7/8″ scale.

Here’s his description of the little railway’s stock:

“Rolling stock at present consists of a small 4-wheel diesel, bashed from an MDC/Roundhouse “hustler” chasis, 2 small passenger cars, and 2 bulkhead flats, all bashed from LGB “field railway” car frames. I also have an LGB side-dump car posing as 7/8ths. All are equipped with Ozark Miniatures link and pin couplers. Also in the works are several Hartland “mini-series” conversions: three tippers (to be used for grapes), and three tank cars for the wine.” Ingenious modeling!

Here’s another version of the “TymeSaver” idea in a large scale. This one is O scale standard gauge, in a space just 16″ x 54″. Track is Rivarossi, with 24″ radius curves.

This is the trackage of the Mon Eastern Railroad, an O scale line I operated in my cellar a few years back. The line is pictured and described in full color elsewhere on this site.

I found the idea for this plan while looking for something else — a classic example of serendipity. I was leafing through the Masterworks — John Armstrong’s classic Track Planning for Realistic Operation, when I noticed a knot of industrial trackage with the legend, “In extremely close quarters, track may have to head to the left to go to the right, even using minimum possible radius.”

That’s what happens on the Serendipity Switching Line, a shelf layout with two extensions (or cassettes, if you wish). The setting is an industrial district on the edge of downtown, where real estate and trackage are crowded together. The Downtown Turn enters from the right rear, a small diesel switcher and 3 or 4 cars, and takes the siding. Then it proceeds to follow its switch list, distributing cars to various industrial sidings and picking up cars scheduled to ship.

There are of course obstacles. For example, local ordinances prevent standing cars from blocking the street crossing for more than 10 minutes. And part of the job involves switching cars along the edge of the street … and also involves that “veer left to go right” track, which in HO scale requires a 10″ radius. Take it verrrrry slowly! In all, a single Downtown Turn should take more than half an hour to work, from entrance to exit with the locomotive on the point.

The backdrop can be painted or can be factory flats, including the loading door where the track enters the building at the upper left. Scenically, the Serendipity Swtiching Line offers lots of opportunity for fans of grime and clutter (you know who you are). To operating fans it provides an opportunity for urban shunting in all its gritty reality. And you get all this in fewer than three square feet! 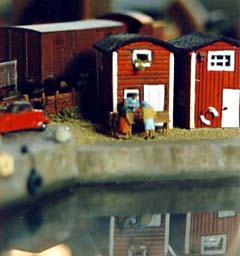 Johan Emanuelson, from Malmö, Sweden, designed his HO shelf switcher to represent a small seaside town in southern Sweden. Sandby is compact — 107×39 cm (42″x15″) — but Johan has designed a nice complexity of shunting operations in this limited space.

For example, the single track to the left of the runaround (passing loop) is only as long as the locomotive, so running around cars for the run down to the wharf siding is a tricky operation! Similarly, the wharf siding lead (headshunt) is only long enough to hold the loco and one car — which adds difficulties to switching several cars to the waterfront. And just to keep things interesting for the wharf switcher crew, Johan has included a kickback siding off the wharf.

Scenery was created to represent a small Swedish town as authentically as possilble. Johan enlisted the help of his father and sister to build some of the scenery, making the layout a family affair. Good strategy! 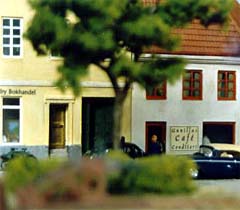 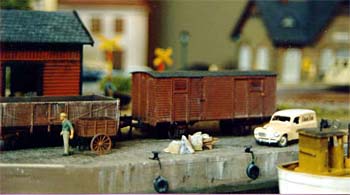 From the Netherlands comes this clever variation on the Timesaver, Martin’s Concrete Co. — a specialized industrial tram serving a structural concrete plant. Vincent Wesstein introduces his plan this way:

“In Holland, like anywhere else, we have concrete factories. Some make materials for the building industry, like reinforced concrete slabs or concrete foundation stakes (piles). I have seen photos of a small narrow-gauge railway on a factory site that transports these stakes from the manufacturing hall to the storage area. It was used as late as the 1970s or even the 1980s.”

This 4×1 foot plan depicts such a line. It brings out the piles or stakes on special heavy-duty flat cars (sometimes two, as the piles can be up to 100 feet long!), and hauls them to the heavy crane, which places the piles in the storage yard or loads them onto trucks (lorries) for transport to the construction site. The crane is placed “front and center” where it can be a magnificent sight — even a fully working model, if you wish!

The Manufacturing Hall is open at the back and serves as a fiddle yard for loading piles or stakes onto the flat cars.Most of the factory yard is paved over, perhaps made of meter-square concrete slabs. Motive power could be a single two-axle diesel or steam locomotive — maybe a “critter.”

Vincent is considering constructing Martin’s Concrete Co. as both a warm-up for more extensive modeling activity in the future and a test-bed for scenery-building techniques. A specialized railway with unique rolling stock, this layout can be an unusual and fascinating industrial system when built.

PIne Ridge was originally designed by Canadian Steve Christopher as the conclusion of a short stub branchline in Central Ontario, about 40 km north of Lake Ontario. I have adapted it for construction with Peco small-radius turnouts and flex track. This little layout is an ideal beginner’s line, easy to build with lots of switching opportunities, reminiscent of the original TimeSaver by John Allen (but considerably more congested!).

Steve comments, “Pine Ridge’s two industries are served by a short branch off the CN Bala Sub line. The timeframe can be almost any period, as long as the equipment is kept small. Mine is in the mid to late 1960’s with 40-foot boxcars and an SW9/1200 assigned to this short run.

“The two main industries are the Pine Ridge Bakery, founded in 1876, shortly after the village of Pine Ridge was founded, and Blackwood Oil, also a fixture in the town since the early 1900’s. The team track was added in the 1930s as more and more of the local farmers began to sell their produce outside of town. Today most of the produce loaded at the team track is destined for dinner tables in the Toronto area.

“The arrowhead on the plan represents where an offstage cassette would be attached, to serve as a source and destination for trains. At most, two pieces of rolling stock can be brought into the layout at a time. The passing track is designed for an engine to pass a single car at a time.”

Steve begins an operation by pushing two cars onto the layout from the cassette, so he only has to run around cars destined for the bakery. I think it might be even more fun to make a rule that all trains must always be headed by a loco, which would require several runaround operations to switch the team track and the oil company!