There’s a school of thought which holds that every small layout
with both facing and trailing sidings must have a runaround loop
(passing siding) to function properly. Not so, as this (admittedly
carefully selected) group of layouts demonstrates!

Another approach to the “two-sided micro” is the Tusydes Industrial Conglomerate,Inc. This 4-foot-long shelf divides its time between a scenic dock-switching area (left) and a tightly-squeezed industrial shunting scene (right). Each is best viewed from different sides of the layout.

The idea basically is to use the “hidden” side as a fiddle yard for the side you’re operating. For instance, in the configuration shown above, you’ll be shunting the industrial yard at the right, using the lower track at the left as a switching lead (headshunt). Turn the layout 180 degrees, and you’ll shunt the dockside scene, using the upper spur (right next to the Industrial Flats) as a lead track. By a clever choice of industries to model, you can use the same rolling stock for both sides — or, if you prefer, change it completely when you rotate the layout!

As drawn, the TICi is designed for HO or OO standard gauge, using small switching locomotives and short, four-wheel cars (both headshunts are about 15″ long). The same layout could be built as an On30 or even Gn15 narrow gauge line, with appropriate adjustments in scenery — the track will stay the same.

When you’ve mastered the variety of switching games that can be played on these dual-purpose tracks, try your hand at automating the dockside crane, or build a car loader into the structure over the tracks at the upper right. There’s lots to do here, in a very small space!

Alpmatten is an HO scale Swiss layout by Peter Marriott. It has been exhibited in England and was recently extended to a second baseboard. The drawing shows the original baseboard, 48″x15″ (120×38 cm), and illustrates how much exhibition train movement is possible in a small area.

The standard gauge line (heavy lines) runs under overhead wire supported by catenary, Swiss style. Passenger service to the station is provided by an EMU car of the SBB, that appears from the other baseboard at the right and parks in the bay. An SBB Class 460 freight loco shunts several wagons in the long front goods siding, then pauses as the EMU leaves the bay line and continues into the tunnel, hiding in the fiddle siding.

A superb Bemo HO metre gauge loco appears from the narrow gauge tunnel, takes the sun, and retreats into the tunnel again. After some more action from the SBB Class 460, the EMU reappears from the fiddle siding on its return journey, pauses at the platform on the main line, and departs to the other baseboard and its hidden sidings. 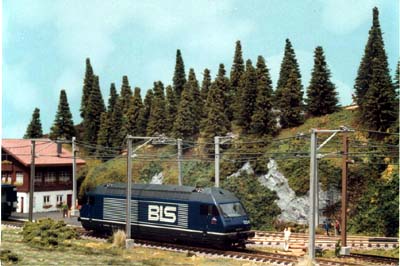 All in all, a great deal of action can be seen in a relatively small space! Scenic emphasis is on verticality, appropriate for the Swiss alpine landscape and convenient for concealing trains that supposedly are headed for stations many kilometers up the line. This layout is among very few in this Gallery that are designed for exhibition running, a very important part of the British modeling scene. Operating emphasis is on continuously moving trains, rather than on involved shunting activities.

Chris Ellis, who edits Model Trains International magazine, created this micro layout plan — partly influenced by this website, but mostly impelled by a lifelong fascination with very small layouts. He found a piece of MDF (particle board) exactly 3’9″ x 6.5″ … and decided to build a true micro layout in this tiny area. The result is shown above, and documented in Issue #42 of the magazine.

Chris’s plan is ingenious. Placing the double-slip switch in the center allows clearance on each of the four legs for an Alco or EMD switcher and two U.S. 40-foot freight cars — perfect for switching / shunting. Choosing to represent a crowded, inner-city switching area, Chris arranged for both ends to disappear inside large buildings, providing two “fiddle areas” (where cars can be swapped by hand) in several directions at once. So the loco can enter concealment hauling one car and reappear ahead of an entirely different one.

Another unique feature of the layout is the arrangement of scenic items, including structures that plug in and out, to represent not only several eras of railroading but several countries as well. Chris operates U.S., English, and German railways in eras ranging from the 1930s, through the 1960s, to the 1980s! Never a dull moment in the Small Street Yard / Kleinhof!

To learn more about Model Trains International, to order issue #42 that describes this layout, or to subscribe to this excellent small-layout-oriented magazine, see the MTI website.
Foldingham (U.S. Style) by Giles Barnabe

A conventional track plan in unconventional baseboards is this scheme for a fold-up layout in exactly four square feet. Foldingham (U.S. Style) is a fiddle-yard to shunting-area track plan housed on two hinged baseboards, each of which can be folded up into an 18″x16″ rectangle — easily carried under the arm. Giles Barnabe has adapted an original idea of Jack Trollope’s here, and doubled it for good measure.

The two ‘thin’ ends are 5″ wide and bolted together. The lead track at A is long enough for a 44 tonner and a 40ft car, and the fiddle yard can conceal the locomotive plus 2 cars — the standard length train for this layout. A lift-off overbridge covers one of the folded joins and provides a visual break to hide the fiddle yard. Shunting the grain terminal at G will be a challenge, involving backing the stock into the fiddle yard and “running around” it using Giant Hand power! Alternatively, you might run two different “switching turns” with cars arranged on appropriate ends of the locomotive for each.

Of course, you can make two rigid 3ft sections bolting together at B, which is much easier if you’re carpentry challenged. And most interestingly, you could make either half by itself, adding a 6″-12″ extension at the B end, and have a workable foldup layout in just a shade over two square feet!
A Classic Micro Layout by Chris Krupa

Chris Krupa, who lives in England, has been called “the ‘Guru’ of micro layouts” by no less a journal than Voie Libre, the outstanding French magazine featuring many micro layouts. Chris has built and exhibited many prize-winning tiny track plans. One of his first was Minbury Abbas, featured here and still the favorite of many of Chris’s fans.

Chris explains: “Minbury Abbas translates as ‘the fortified hilltop farm, property of an abbess.’ Minbury Abbas station in the west country of England is imagined to be built at the foot of the walls of the medieval Minbury Castle around which has grown the village of Minbury Abbas. Access for the train to the station is through one of the original medieval tunnels built when the castle was constructed, hence the odd layout. of the station and the very restricted size of the tunnel mouth.” Only small 0-4-0T and 0-6-0T locomotives can make it into the station.

“A quarry just down the line from the station supplies stone which is taken by train back down the valley. The village itself generates quite a lot of inward and outgoing general merchandise traffic which keeps the line busy.”

The track plan is a classic example of developing operating complexity through very simple means. The key to operations at Minbury Abbas is the head shunt (switching lead) that ends in a loco shed. Chris elucidates, “A train usually consists of four vehicles: a small locomotive, two coaches or wagons (freight cars) plus a brake vehicle (caboose) or luggage van (baggage car)…A station pilot (usually a small four-wheel diesel) sits in the road leading to the engine shed.

“The engine shed road including the shed is deliberately made too short to take the four items of rolling stock of a normal train. You must therefore break and shunt the train. For example, when a goods (freight) train pulls in, tthe brake vehicle will usually be at the end of the train. So first one must detach the brake van and shunt it into one of the sidings. The you must take the other two wagons and shunt them, possibly splitting them between the two sidings.

“The station pilot remains in the siding area whilst the train loco reverses towards the water tower at the end of the station platform, refills with water and then reverses to the loco shed for coal and rest. Meanwhile the station pilot is making a fresh train from the contents of the sidings. Again the train consists of three items plus the loco and so a complete train may not be shunted at the same time. A number of movements are necessary. Once the train is reassembled in the correct order, the train loco rejoins the train from the loco shed and departs.”

For passenger trains, a similar shunting sequence is required. In addition an occasional diesel railcar calls at the station towing a trailer car, which also requires special shunting. 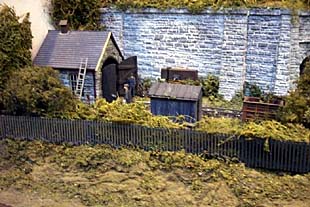 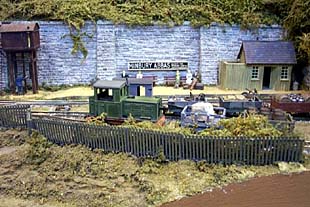 “All in all,” Chris concludes, “the layout is fascinating and absorbing to operate because of the special hazards designed in. This is despite the small size of the layout and its simple plan.” Minbury Abbas is a OO9 (HOn30) layout, measuring 47″x10″ (119×25 cm). Photos courtesy Steve Bennett.

Martin Hogg, from Mansfield, England, has used a generous dollop of imagination to convert our HO/OO Tusydes Industrial Conglomerate track plan into this delightful 15″ gauge estate railway. In the process he’s reduced the scene to a single setting and increased the scale to Gn15 (1:22.5 on 16.5mm gauge), modeling the Midland Road terminus of the Southill Light Railway. 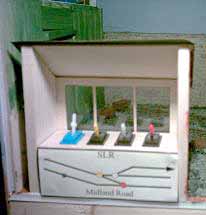 From this terminus and storage yard, the little line exits into the estate through the red gate,. and (hidden from our view) winds its way across to Tuther End, the far terminus. Actually, a concealed cassette receives the departing train and either turns it or replaces it with another.

An interesting feature of Martin’s line is the built in signal cabin (left photo), which contains the switches to control the line’s turnouts (all Peco Setrack medium radius points). The little cabin also provides a delightful and unusual view of the left side of the layout — a favorite viewing spot of Martin’s three-year-old son, Fred.

Passenger operation is handled by a single scratchbuilt carriage (coach), that requires considerable back-and-forth shunting (and two locomotives) to reach the electrically-isolated platform section at the front left. In practice, most passengers choose to conclude their journey at the top left, when the train pauses after entering the layout through the red gate.

Martin has scratchbuilt two locomotives to handle the shunting chores on the line (see photos below): on the left, Sooty; and on the right, Omi. As you can see, Martin also builds his own G-scale (or thereabouts) figures from FIMO clay. Harry is piloting Sooty, and Eric is at the controls of Omi in these work-in-progress photos.

For more information and photos of this delightful large-scale-in-a-small-area railway, see Martin’s website. 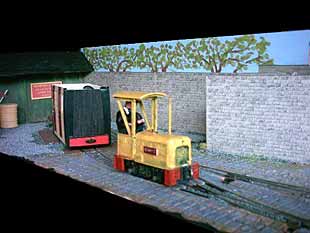 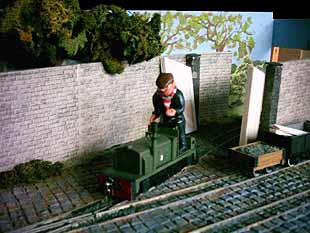