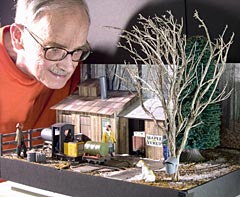 Webmaster Carl Arendt died on March 4, 2011 in Olympia, Washington. Carl came to Pittsburgh to attend Carnegie Mellon where he graduated with a degree in physics and met Sheila, his wife of 49 years. Carl started work for Westinghouse Electric Corporation where he spent his entire career. During this time, he and Sheila raised their three sons. Following retirement from Westinghouse, Carl threw himself into the world of micro-railroading. In 2002 he started this web site, and authored three books on the subject. This web site attracted a large worldwide following, and Carl built up a collection of friends who came to know and respect him even though most had never met him in person. Such was his personality that it shone through across the ether. He and Sheila moved to Olympia in 2009 to be close to their son Giles and his family, where Carl enjoyed time with his three grandchildren. His wit, erudition, and creativity made this true gentleman a joy to be with, in both the real and the virtual world. This site is a trove of microlayout ideas and examples, and so long as it continues will keep Carl’s memory alive and further the hobby he loved.