A lot of updates (and a lot more to come!). Since I’ve sent the last newsletter, I got a lot of response from readers and subscribers. Both with good ideas, a lot of thanks (which is really appreciated) and ofcourse a lot of updates!

“I thought I would send you some pictures of my Rosie Cider Farm that was first seen on Carl’s web site back in March 2005 on Scrapbook page 35. As built the small Cider Farm was only 30inches by 20inches. The new addition makes the layout 60inches by 30inches. The Hamlet (village) part of the layout is known as East Dunnet. The Pub called the Cider Apple was scratch built by my very good friend John Dutfield, who used to own the Chelmsford Model Railway shop of the same name. John is my usual operator when we take this to exhibitions. This layout has been on the go in this guise since August 2010 and has been to many Model Railway exhibitions. The Calvert (Flood water run off) has a clear bottom and is topped by a piece of clear perspex covered in ‘Cling Film’ to give the appearance of flowing water. This is always a crowd pleaser at shows as people think they are touching real water.” 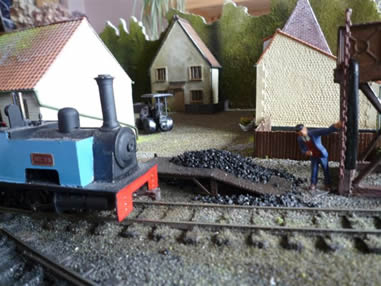 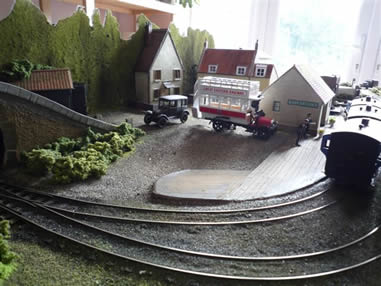 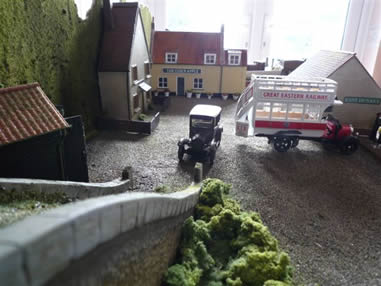 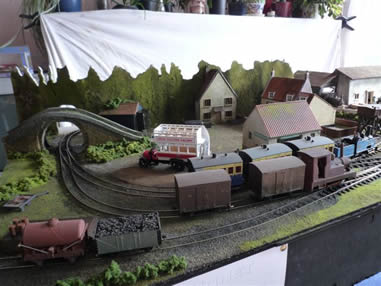 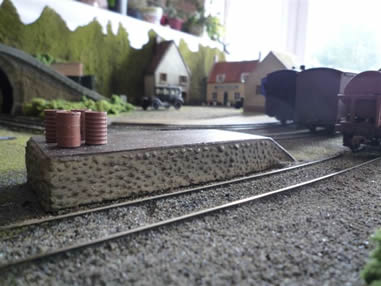 ON30 PORTABLE by Tim Jenkins

“It is 3’6″x5′, on 2″ pink foamboard. Not heavy at all. If I can raffle it, my next adventure will maybe be in N scale, as I am contemplating a change. The smaller size fits my shrinking life style better.
I am a senior who lives in Ocala Fl, and I love trains. Always have. The inspiration for this small layout came from scrapbook page 95, the haiti layout which I like very much.” 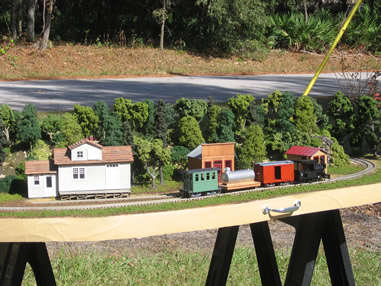 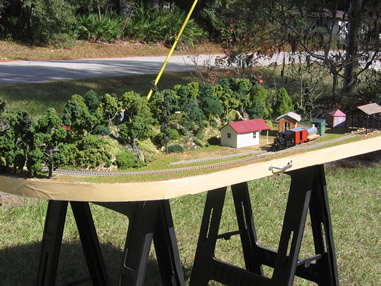 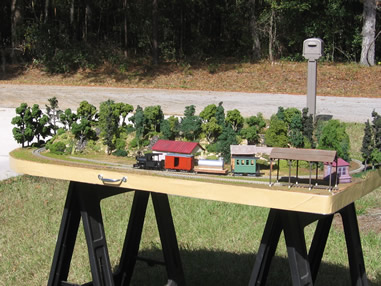 “The layout measures 8.5″ wide and 72″ long,it was constructed after finding two peices of 2″ thick blue insulating foam in a skip at my old work place, joined together they measured 71″ inches long,with the edges cleaned up and made vertical a piece of surplus architrave was drilled and doweled on to the front edge. I made a vist to the offcuts bin at a local builders supply dept and found two offcuts of 6mm mdf measuring 9” wide,these were cut to size for me on their sheet cutter and once home out came the PVA adhesive and assembly began.
The layout sits on 6 one foot long peices of wood attached to the underside of wooden purlins that are roof supports in my converted loft.It’s quite light to move
The four points were reclaimed from earlier dismantled layouts but i had to purchase a couple of lengths of “Peco” flexible.
The track plan was to be an Inglenook to run one or two items of english stock on (i model North American HO) but when i started to work out where to place the uncoupling ramps i started to consider converting to KD’s, i got out a couple of boxcars and found that although clearances were very tight i could have a 2-2-4 yard, so it then became American!!!
A kick back siding was added to provide more activity.
3 yrs ago i had purchased a new Bachman EZ dcc controller at a show for a measley £25.00 but had never used it. but finding two new Bachman DCC equipped locos at my local model shop for silly money i purchased them and the layout works excellently with these locos, and controller gives nice slow running..
Adding the kickback requires that a second loco has to be used and for this DCC is ideal, if you are thinking about DCC then the EZ unit has so far proved itself to be very good, especialy if you dont have a big fleet of locos .
Backscene paperflat buildings are mostly off the net, Not a lot is required on the buildings front as you can see.Unit models,Wills and Tomar industries all being present’
The layout has been cheap to build and fun to use,and there is a lot more to do!!!!!” 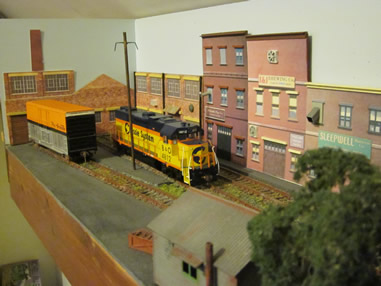 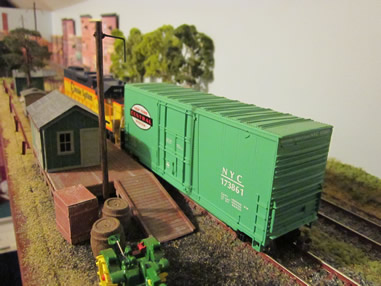 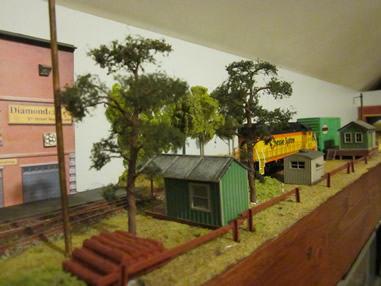 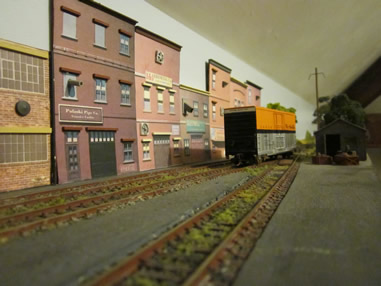 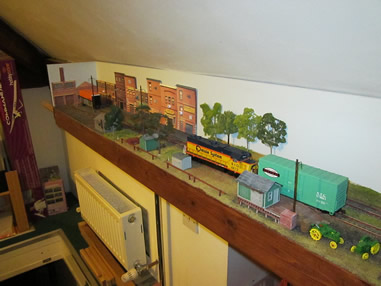 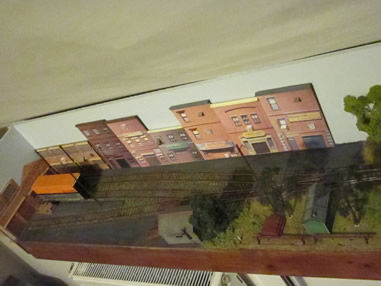 “I thought I would send you these photos of the Micro that I called Steephill Mine that appeared on Scrapbook Page 107, November 2011. The Little layout has a new owner now, Mrs Pat French and she has done a very good job making the scenery look as good as it does now. Pat has also taken the Micro out of the Box and has made a better surround for it. The Micro is now about 20 inches square and the controls have been moved to the back to make it easier to operate. Pat has also made a new back scene and this is of the Lake District, Pat is going to rename the layout to give it a name more in keeping with this area of England.” 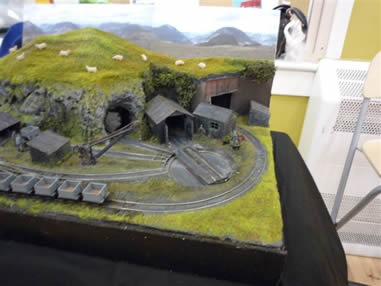 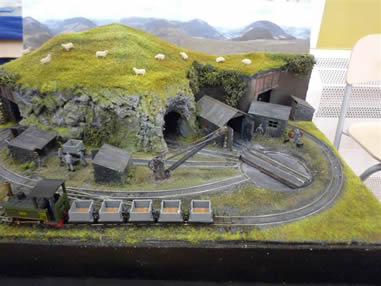 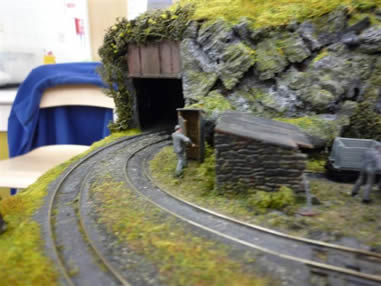 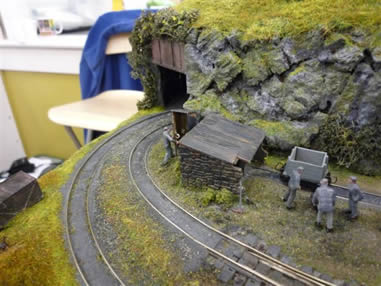 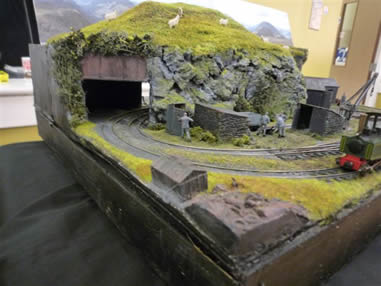 “At this moment I am building a (of course) small lay-out called ’pakhuismeesteren’, in fact a simple inglenook.”

“Here is a picture of myself Chuck Perrucci in 1952 with my Father running the Lionel trains around the aluminum christmas tree. Note the 12″ Philco TV and the 45 rpm record player in the background” 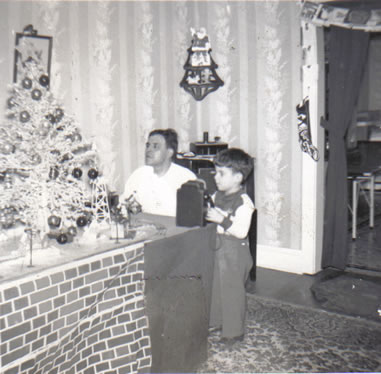