“Making up my home office I found a little box of balsawood. It had stored some chocolate from Rausch, a Berlin chocolate factory. The inside measures were 200 x 125 x 28 mm. It seemed to be the right box for a real H0-gauge micro layout with a train running in circle.

OK: In spring 2102 readers of German “Modellbahnjournal” could order for free a non-motorised model of an H0f-Gmeinder industrial light loco by Busch. I got mine in summer. Two weeks later I held a starter set of Busch´s H0f gauge light railway in my hands: One loco, two tiny wagons, some tracks forming an oval and a something somebody would call “controller” – a little box for two 1,5 V batteries with a switch (left – off – right). Another loco and some more wagons followed.

In February this year I started some experiments. I wanted to learn about the smallest track radius the Busch loco would accept. Radius of the original Busch light railway tracks is about 125 mm. For my experiments I used some Märklin Z-flex tracks without any iron metal inlay.

I think that 40 mm is the minimum radius the Busch locos will accept without causing technical problems. As I found out prototype industrial light railways in Germany ran on tracks with a radius not minor 5 meters (mine railways), that are 57 mm in H0-gauge 1/87.

But back to my tiny chocolate box: I took a sheet of 10 mm plywood for baseboard and draw an oval on it. Then I milled a slot along the oval into the baseboard and glued an old bowden cable from my bicycle in. Next step I glued some Märklin Z-track over the Bowden cable and soldered the ends of the rails together. The floor inside and outside the oval was plastered with cobblestone by Noch. And last but not least the backdrop scene is delivered by Heki´s citiline factory building cardboard model sheets. Some accessories came from different sources (Auhagen, Piko, Noch and some British and American suppliers) to complete the scene.” 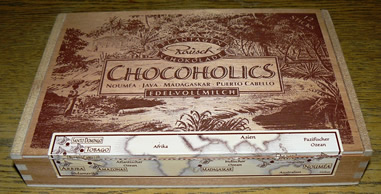 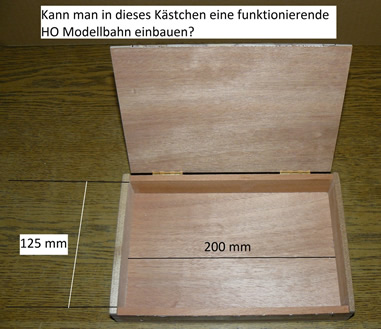 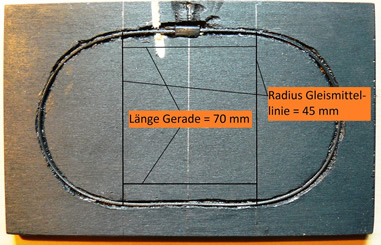 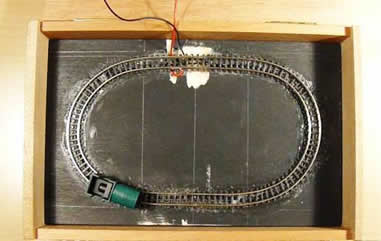 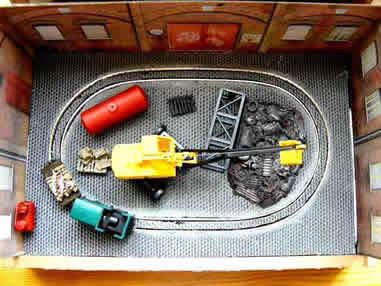 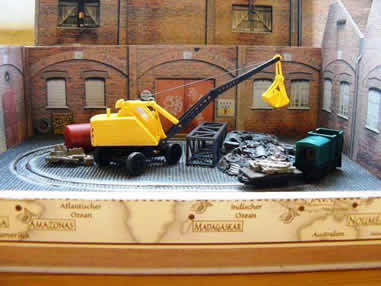 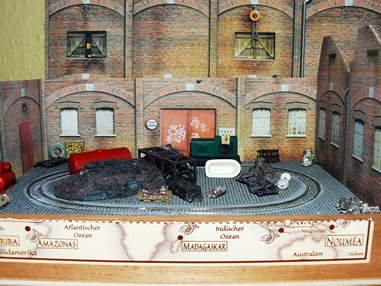 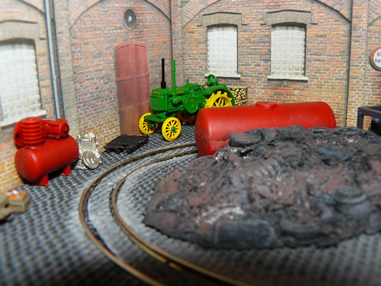 “This is my 8inch x 48inch shelf layout (unfinished at the moment) with a small fiddle yard to the left. The layout it is my small preserved station at the end of the line with a goods shed and a siding based somewhere in East Anglia so I can run my little engines and a couple of carriages and goods wagons.”

FREELANCE 0n30 by Roger Brookes on East Coast of UK

“This is a first layout I have completed since my youth (long time ago) and was built for a local model railway show.
The layout had to fit in the back of my wife’s Picasso car and be easily set up and operated by one person. It based on an HO plan I found on Carl’s site but don’t seem to be able to find again.
All buildings are made from Clever Models designs and are cardstock.Most of the rolling stock and engines are Bachmann with added details.” 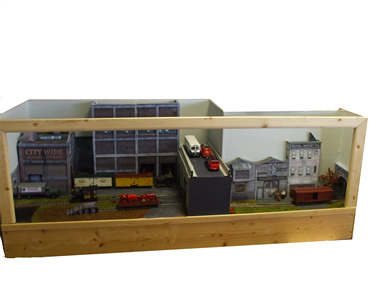 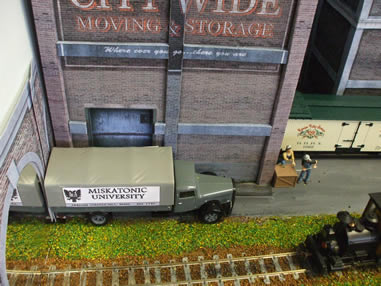 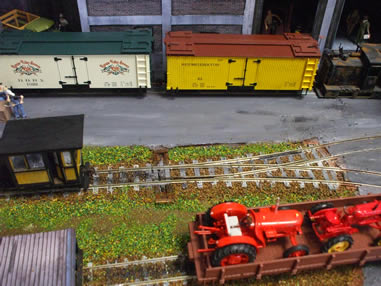 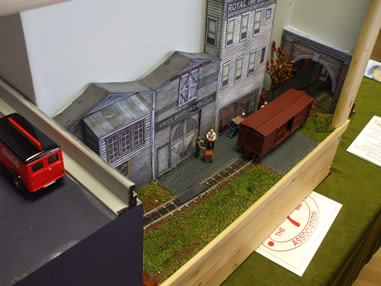 An update on the SONACAL micro by Geoffrey 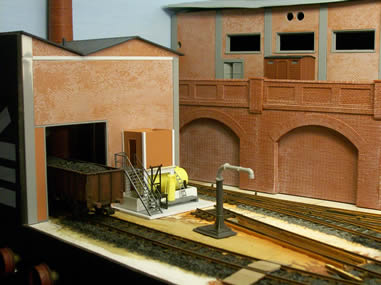 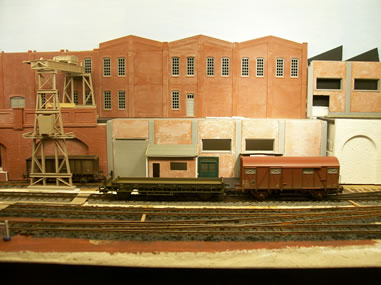 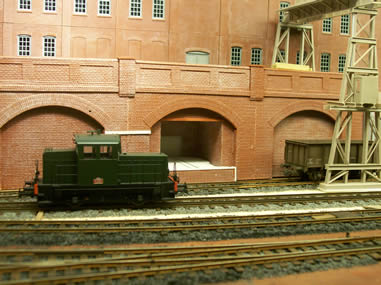 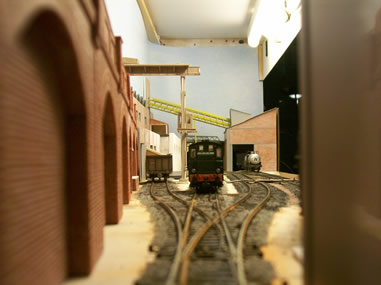 THE (hardly…) TOYAMAKO by Francesco Zezza from Italy

“After having modeled (mostly in N gauge) small/extra small layouts “living” in different locations I turned my attention to Japanese railroads, needless to say it were the, so called, “Bullet-Trains” environment to attract my interest, regrettably to run those trains in a roughly prototypical way you need something closely resembling an airport straight (that I happen not to have). Hence I decided to try a small tram “cameo”, named “The (Hardly …) Toyamakō Line” since it resemble, even if very loosely, the real Toyamakō Line.
Size is cm 60*30, what I’d call a “Micro”. I gave a try to Tomix “slab-track” (not bad, btw!) setting up a sort of elongated pizza. The traffic is simple: a single tram unit (Tomix) runs round ’n round connecting two tram’s stops, located on the opposite sides of the layout.

Toyama Light Rail Toyamakō Line: in real those trams are in service in the Toyama Prefecture (Japan) connecting the City of Toyama with its port (facing the Sea of Japan). Rail car in service gain their nickname Portram from the mix of words “Port” and “Tram”. Portram are, in rela, painted in white with “stripes” in seven different colours (mine is violet).

A small, further, techie note: those tram are meant to run on a 12V electric supply, for a reason I haven’t been able to get (all instruction are printed in Japanese only …) this electric supply resulted in a “F1 like speed” absolutely NOT prototypical. A small – handmade – “box” containing three AA cells (1,5 V each) with a tiny, one way, stop/run switch solved the problem allowing an adequate speed. In real a Portram goes 60 kmh/37 mph on the rail line and 40 kmh/25 mph on the tram line. This kind of power supply – last but not least – greatly increases, also, the layout “portability”: you do not need an electric outlet at hand …” 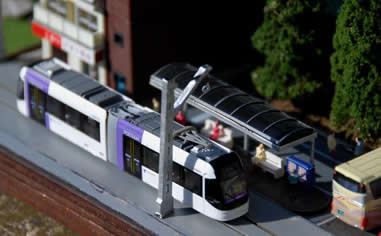 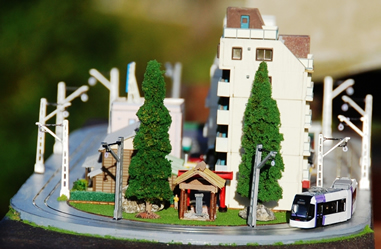 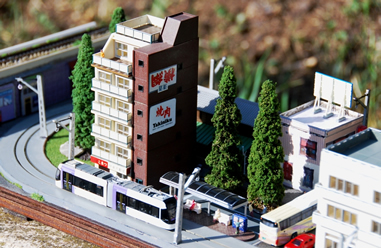 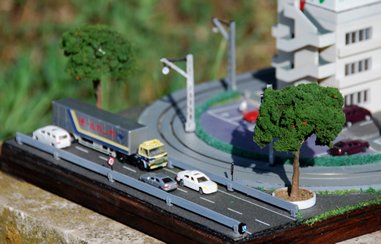 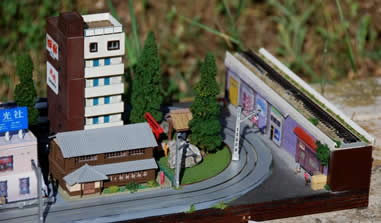