“After around 40 years of thinking of making a railway layout but never having the time or money to build one, I saw the pizza layouts, on his site.
That set me thinking!
First I was going to model something narrow gauge industrial. Then after another visit to the Beamish open air museum in Durham England, I realised that they have a full size space saver, in fact three!
The one that I like is the Georgian Pockerley wagon way. This is a replica of the first steam railways, built to transport coal. Up till then they had used horses to pull the wagons.
This comprises of around half mile length of track with small single platform station period engine shed and sidings.
At first I was thinking of making a layout of this type but to run any engine much at all it would have to be rather long shelf, and went of the idea.
So in the end, after some experiments with minimum radius curves. I decided on an oval with one turn off. I wanted two, but could not do it in the space that I had.
The track is Hornby flexi track that I had bought, in about 1989, when thinking of building a layout. The base is just made from recycled wood and chicken wire, with papier-mâché on the top, for the hill.
One very big problem was finding a locomotive, there are no commercial produced 1800s OO or HO locos that I could find But I found that Bachmann produce a few early locos, I found an example on Ebay of the Norris 4-2-0 Lafayette so I thought I would use this as a first loco and try to scratch build something like Puffing Billy in the future. But I think it could be very difficult to make such a small engine of this type, but I am going to try.
At beamish they have three replicas. They are-
1813 William Hedley’s Wylam Colliery, locomotive, Puffing Billy.
1815 William Chapman / John Buddle Wallsend, Washington and Hetton colliery, Locomotive Steam Elephant.
1825 George Stephenson, Stockton & Darlington, railway engine, Locomotion
The steam elephant is the only one that was not copied from the original. It was made when two period paintings came to light, as no drawing exist only some sizes and costs I think.
I have had the pleasure of steaming and driving this engine for the day; it was a very interesting experience. It worked very well but could be a little temperamental when setting off as it seemed to have a bit of a dead spot and liked finding it for me; I think it liked to see if a new driver could overcome the problem! It’s defiantly a Nellie the elephant.
Back to my layout I have as you can see got some of the seanary started. Also I have made two Chaldron wagons one is about finished and the other needs a few details and painting. Chaldron wagons are made for horses to pull, but carried on being used long after engines had taken over railways. ” 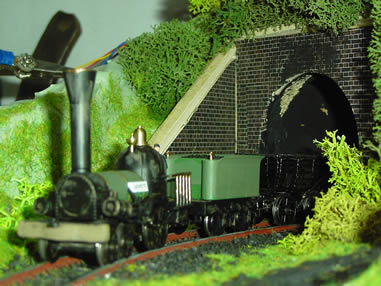 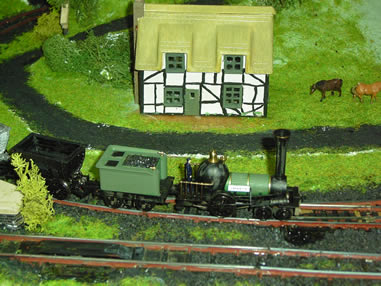 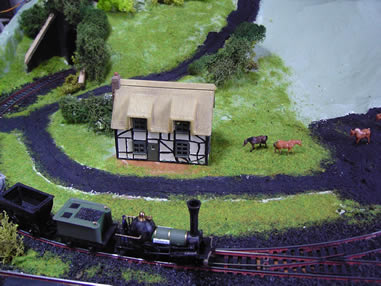 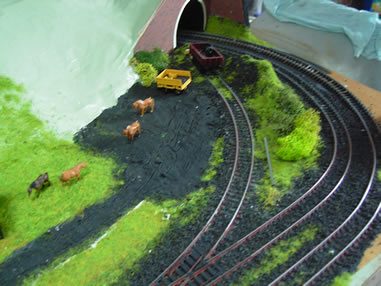 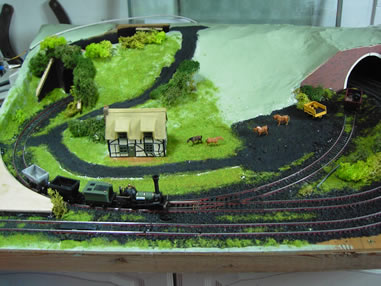 “Inspired by some of the traction layouts on Carl’s site I’ve built a small diorama called ”Heritage tramway”. Since the tram model is of the Hong Kong Tram supplied to the Birkenhead Tramway in the 1990s and I live in Birkenhead, it’s not difficult to see the inspiration for the simple tuning fork layout. Built on foamboard off cut with vinyl flooring as the road surface, it is a bit of a recycled job.” 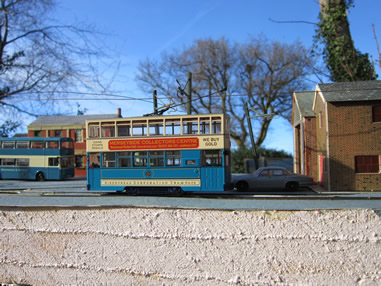 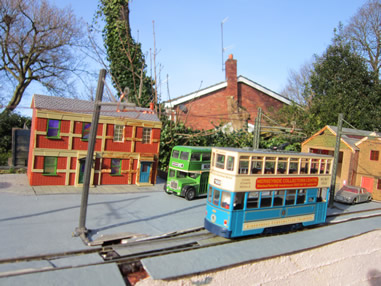 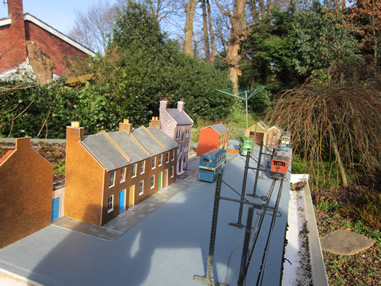 “Three months ago I commited myself to build a layout, a small layout to attend a show, that happened in Oeiras, a town, next to Lisbon. It had to be small, light, easy to build, and somewhat different that we , portuguese modellers, are used to see in shows around here. So that’s why I built a japanese themed layout. So I gathered all the stuff I needed: a 100 x 60 cm of foam fot the base, PECO code 80 track, Greenmax and Tomytec buildings. So, I started to build it, and every night for the next two months I did something: Layed down the track, painted it in an airbrush. Applyed ballast from Woodland Scenics. I built the mountain using foam-core card. The I used Woodland Scenics and NOCH foliage to cover it. On of the things that I loved to build was the red “tori” gate. It was made of Evergreen. The hoses where painted by my girlfriend and my brother, and weathered by me. Finally I added figures from Tomytec.

Rolling stock is RTR KATO and TOMIX locomotives and freight cars are from KATO.

I also need to thank a good friend, Carlos Filipe, because he was a great help and also some friends from a Facebook group.” 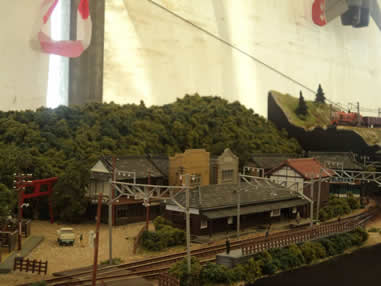 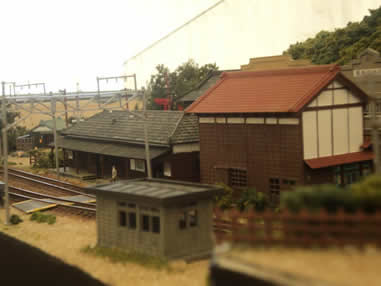 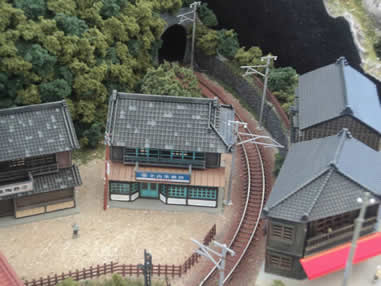 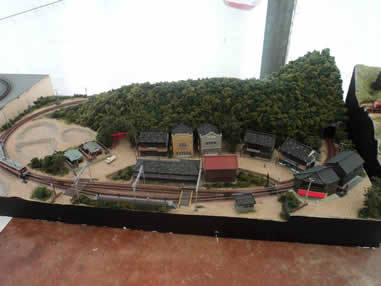 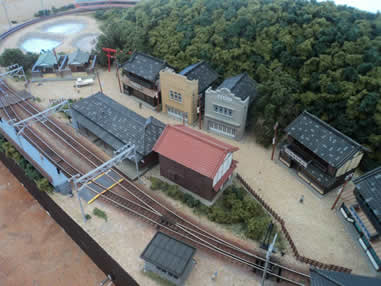 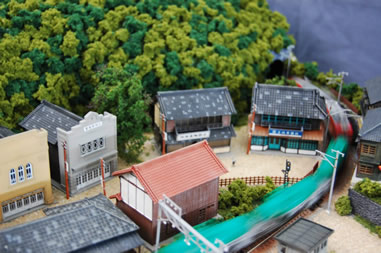 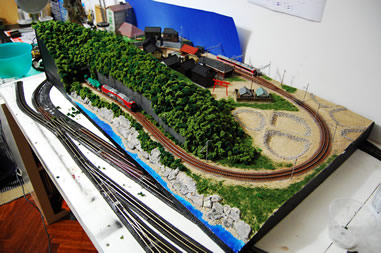 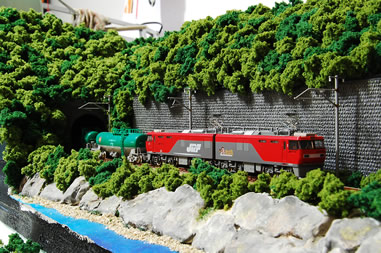 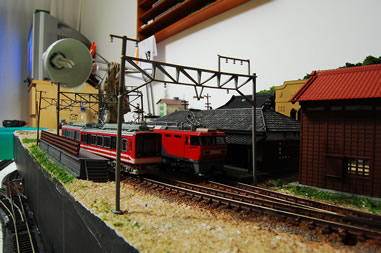 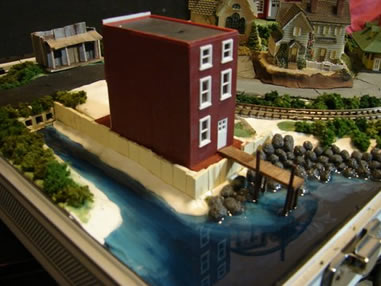 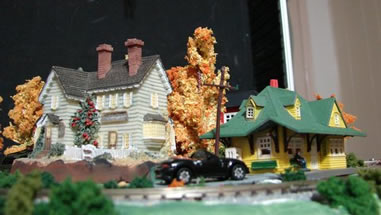 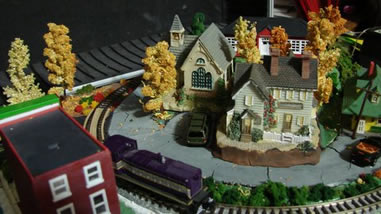 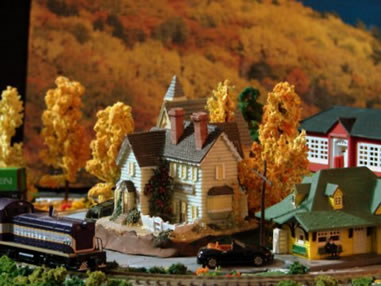 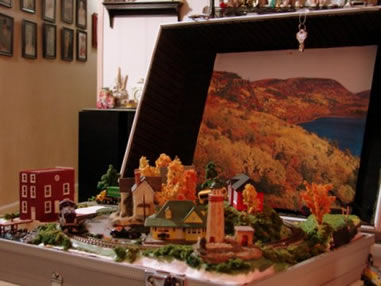