A PRIDE OF N-SCALE MICROS!

WEBMASTER’S NOTE: Every so often I run across a story that is so full of interest and fun that it calls for a special issue to tell you about it. Here’s one that involves an online group of N-scale modelers who declared a challenge in 2004, to build micro layouts occupying no more than two square feet. The deadline was January 1, 2005. The venue for progress reports was the All Model Railroading Forum for N/Z Scales. Seven modelers rose to the occasion — here are their results!

Jim Marksberry, from Butler, Kentucky USA, chose to fill his 12×24 inch layout with elaborate urban details, a la George Sellios. You can see some of Jim’s fine scenery in these views and much more of it — along with a bunch of modeling tips — in his folder on the Discussion Forum. Jim definitely disproves the old saw that N scale is too small to require much detailing!

Jim’s track plan for Templar Street is a simple 180-degree half-loop with a couple sidings, both facing in the same direction for ease of switching. The real focus of this micro layout is on the many delightful scenic details. 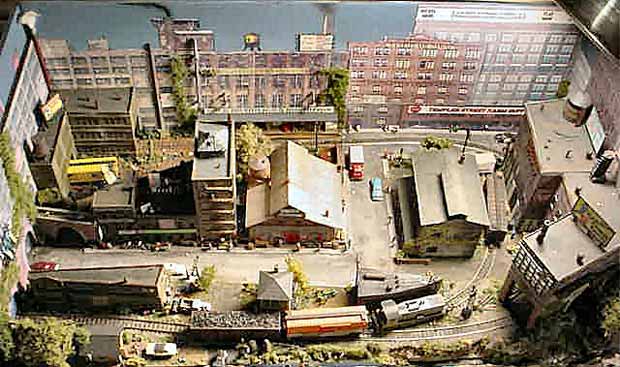 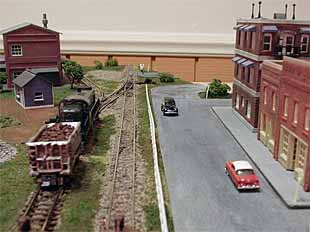 Rory Glasgow, from Huntsville, Texas USA, chose to make his 12×24 inch layout an open, local-switching area that can be added onto a larger layout later. Some switching is possible on the standalone version, but it’s limited.

David Walker, from Raleigh, North Carolina USA, had trouble finding time to work on his challenge layout, but prepared an excellent plan for a local switching district. His setting is similar to Rory’s, but the plan has more operating chores to do. The main line (blue) disappears behind the fuel dealer and the bed factory, to create a small fiddle yard for adjusting cars and their loads backstage. The baseboard measures 36×8 inches.

Notice that the industries are named for members of the N/Z Scale Discussion Forum, and for one guest. I’m agog to find out what the Carl Arendt Hobby Shop will look like (please send photos when you’re done, David)! Meantime, you can follow his design process in David’s folder in the Forum (he uses the nickname, “Screwy Squirrel”). 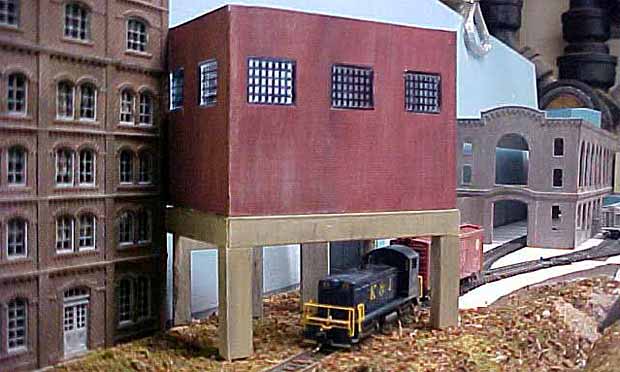 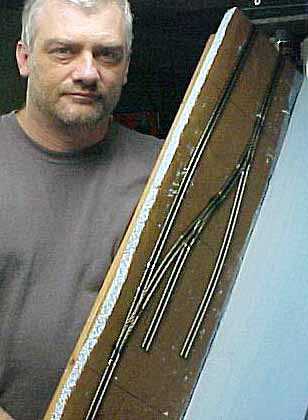 Drew Allison, from Louisville, Kentucky USA, also built a 36×8 inch switching line in an urban setting. His layout is still under construction, but the view above shows how he is using large-scale architecture to realistically dwarf the trains. Notice too that Drew has made use of the air rights above the tracks to build a structure that also serves as a view block.

The relatively simple track plan can be seen at the left, along with Drew himself. For more information, see his folder in the Discussion Forum. 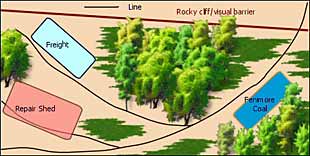 Nelson Almeida lives in S. João do Campo, Portugal. He chose to use 9mm track but HOn30 scale for the two-foot challenge. His 24×12-inch logging layout, still under construction, will use a short extension to the right for the engine to switch cars in the Inglenook track pattern. For more on Nelson’s model, see his folder in the Discussion Forum.< 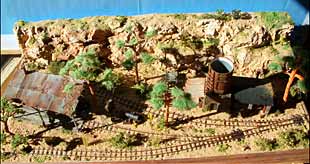 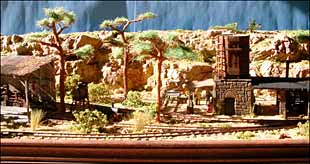 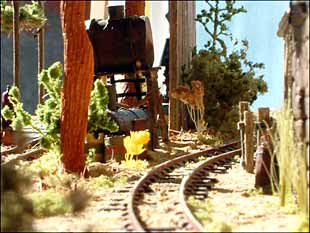 Nelson has completed the scenery on his two-square-foot layout and sent us these photos. Looks good! He’s also opened a web forum for Portuguese-speaking modelers. Boa sorte, Nelson! 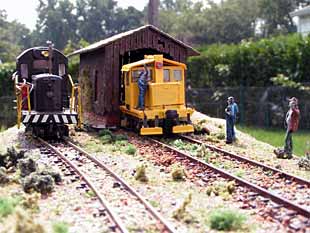 Jon Paulsen, in Lafayette, Indiana USA, also elected to build an HOn30 layout. In order to achieve the nicely flowing trackwork you see, he selected the useful size of 52×5.5 inches — just under two square feet! You can follow his progress at his Forum Folder (his nickname is “Knudson”). 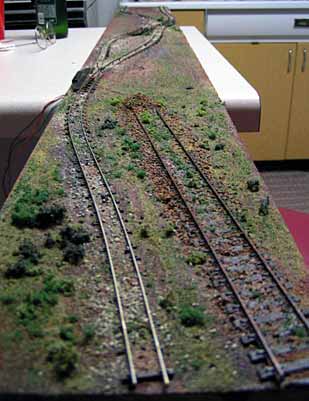 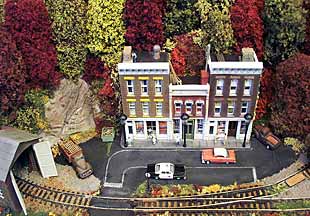 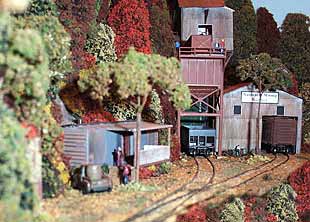 Mike Goad, who lives in Bryson City, North Carolina USA, moderates the N/Z Scale Discussion Forum under the nickname, “Tyson Rayles”. Mike’s entry in the challenge is this delightful mountain line with autumn scenery, artfully divided into several viewing areas as indicated on the plan. There’s lots more information, including how he did it, in Mike’s folder in the Forum. 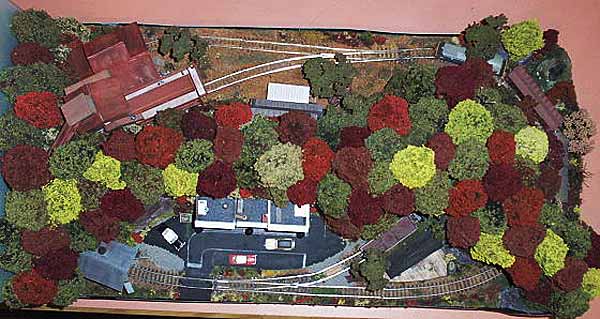