If operation is your goal, micro layouts may seem to have a limited range of possibilities. But consider this layout!

This Locomotive Depot, based on a design by Nigel Adams, uses a traverser–or transfer table–to move locos from one track to another for repairs, servicing, etc. The “rest of the world” is represented by the hidden fiddle yard (upper left).

Perfect if you like to collect motive power but lack space to run long trains! And no turnouts (or “points” in England) in sight.

Next is the Squarefoot Estate Railway layout, featured prominently elsewhere in this website.

For our purposes here, the “point” of showing the SFER plan is to illustrate another approach to designing a “switchless” micro layout. This little railroad uses a sector plate (a length of track pivoted at one end, serving several tracks) to switch from line to line. This stunt eliminates the need for space-consuming turnouts. A good dodge when you’re designing a layout this small (14″x11″)!

By the way, someone has calculated that the Squarefoot could be built in HO or OO scale in a space roughly 5″x6″!

Here’s another operations oriented micro layout, even smaller than the Squarefoot! It’s based on a design sketch by Paul Killick, and shows a lime kiln served by a very narrow gauge railway.

Cars of raw limestone come from the small cassette at the lower right, and pushed by a tiny tractor loco move around the bend to the elevator. They are lifted to the upper level and there dump their loads into the two bins of the kiln.

On the lower level, cars of coal reach the bottom of the kiln bins via a small wagon turntable (another substitute for a turnout). They dump their loads and pick up lime inside the structure.

Sure, it’s a tour de force to try to squeeze all this action into a 10″x10″ base in G scale. But as a challenge for a clever modeler, it’s hard to beat! 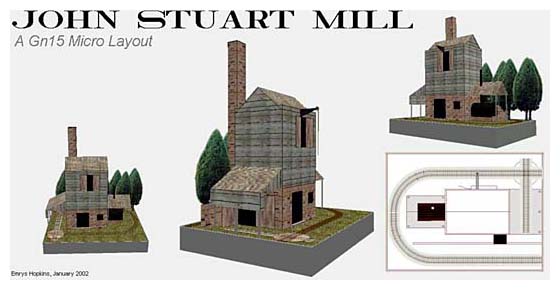 The indefatiguable Emrys Hopkins has come up with a variation on the Lime Kiln theme that is fun and relatively easy to build and like its namesake, economical. The railway serving John Stuart Mill is a simple push-pull line, originating behind a backdrop and curving around to the front of the Mill. With a 6″ radius in Gn15, it will occupy just 16″x20″. In On scale, with a 4″ radius, it will measure 12″x15″. And in HOn, using 3″ curves, it can be only 10″x12.5″!

The impressive Mill itself provides a number of places to shunt cars … there’s an overhead crane (a working model would be fun to create!), a freight dock with large sliding doors on the first floor, and a covered shed at the side–reached by a wagon turntable–for perishables or other delicate loads. You might also want to bring in loads of coal and dump them beside the power plant at the near end of the building. And devising a working cable pull for the turntable siding could be a modeling challenge. All in all, a lot of operating fun is available in this simple line!

For more examples of Emrys’s layout designs (and some others’ as well), mostly larger and with turnouts, see his excellent web page, LayoutDesigns.com.

Intrigued by the John Stuart Mill layout, Jeff Semprebon designed Gosport Engine Terminal using a sector plate in place of the wagon turntable. He also took advantage of the sector plate’s flexibility to add several sidings to handle movements around the facility. There’s also storage for one or two of those delightful Maintenance-of-Way (MOW) cars that seem to accumulate around narrow gauge lines. The track leading “to the rest of the world” can hold a cassette or lead to a fiddle yard on another board.

As this facility is designed for the care and feeding of “critters,” it can serve either a standard gauge or a narrow gauge line in G, O, S, or HO scales in addition to Jeff’s preferred scale of 1/35n2. Overall size is 18″x32″ (45×81 cm).

Building in his turn on Jeff’s idea, Emrys Hopkins substituted an 8″ turntable for the sector plate above and came up with Putter, Phizz & Bang Engine Works. In the same space — 18″x32″ — PP&B can be home to G, O, S or HO narrow gauge trains, and perhaps to HO or N standard gauge as well!

Operation, according to Emrys, “would consist of pulling a wagon out of one of the workshops, tootling around to the turntable where the train is reversed, then pushing the wagon into the other workshop for the next stage of the process. And, of course, vice versa.”

Amazing how much fun one can have in a micro layout without using any turnouts!

If you want an opportunity to “let ’em run” in a small area, the Grand Chasm Scenic RR might fill the bill. It features a spectacular trestle bridge or viaduct, crossing a deep valley–perfect for photography as well as for trainwatching. The GCSR can be built in many scales, from G to N, but requires narrow-gauge trains to navigate the 6-inch (15 cm) radius curves.

The operating secret lies behind the scenes and is based on an excellent suggestion by Ian Holmes. It’s a removable train cartridge that also can pivot and act as a turntable for entire narrow gauge trains. A foot long, the cassette pivots on a mini-plug and socket (as suggested by Jack Trollope), which also carries current to the rails. Trains can reverse direction, head into storage, or even be picked up and replaced by a completely different consist!

Train-watching at the Grand Chasm bridge will never be dull, with frequently varied rolling stock travelling in both directions!

From prolific layout designer Reinoud Kaasschieter comes this variation on the Grand Chasm design. He used two small half-turntables to adapt the plan so it can be operated with normal (standard) gauge. In Reinoud’s words:

“Basically, you’ll get a small piece of show-track, marked (2), between both “half-turntables” (1). You’ll lose the continous running from the original. There’re also two hidden storage tracks (3). Hiding the storage tracks with scenery can be tricky. I suggest a special solution for hiding the tracks, but nothing is obligatory.

“Because the layout is so small, I believe the scenery should be attractive and dramatic. I envision a German style, romantic bridge scene. There’s a bridge at (4). The hidden tracks (5) and (6) are hidden by a covered, wooden bridge. Wooden bridges are very rarely used for train tracks, so this one should look like a road bridge. Thick bushes should hide the entrances of the bridge, so no trains will be visible. This layout should be used for eye-level viewing…otherwise the visual effect is lost.

As always with very condensed layout plans, a little more room would allow more operating possibilities. As is, a “train” would consist of a 40′ U.S. car and a very small switcher — or two four-wheeled European wagons with a tiny switcher. Reinoud points out that a good use of this layout might be to make it a passenger line, using individual railcars!

E. L. Moore was a genial and talented modeler from North Carolina who in the 1960s and 1970s designed and built a great many very attractive HO buildings, and published construction articles about them in most U.S. model railroad magazines. His designs and methods influenced a whole generation of model rails. One of my favorite Moore buildings has long been “Bott’s Cotton-Pickin’ Cotton Gin’ which appeared in the Model Railroader in September 1978.

Bott’s Cotton Gin Tram uses E.L.’s building verbatim, but adds a small, narrow-gauge tramway to assist the operation. Loads of raw cotton arrive by wagon, truck (lorry) or railcar (from behind the backdrop) and are unloaded and weighed at the left end of the building. Ginned and baled cotton is picked up at the right end. The middle door is where cottonseed is picked up for transport to the oil or fertilizer works.

I’ve truncated E.L.’s building a bit by inserting a backboard down the middle of the roofline, just high enough to clear the two ventilators on the roof. This ruse, coupled with the “disappearing main line” that ducks into the woods at the right rear, allows fiddling behind the scenes — so cars can be emptied, unloaded, and swapped out. Consequently the BCGT enjoys an extraordinary variety of traffic for a road of its size.

Although it has no track switches, the BCGT uses a couple unusual shunting techniques to position its cars for loading and unloading. Cotton bales are loaded onto rail cars under the porch roof at the right of the gin. The wagons get there via a small wagon turntable (6-8 feet long) that is much too small to hold both the car and a locomotive. The car is moved to the loading area by rope wrapped around a capstan and pulled by the operator’s (invisible) hand. It’s returned to the turntable the same way. A mechanism should be fairly easy to design that allows you to pull the car manually from the backstage area of the layout.

Coal is also delivered to the boiler room by way of the turntable. These little open wagons are hauled along the siding by a locomotive on the “main line” pulling a rope tied to the end of the wagon. Both of these shunting methods were widely used in both the U.S. and Europe to serve small, awkwardly placed industrial sidings. They add considerable intensity to the operations of the Bott’s Cotton Gin Tram.

A few other modeling challenges might intrigue you: smoke could occasionally puff from the boiler room chimney, the turntable can revolve either manually or automatically, and coal might be automatically unloaded from the open wagons beside the boiler room. The handling and delivery of cottonseeds is left to the ingenuity of the reader!

The BCGT owes a lot to Emrys Hopkins’s John Stuart Mill layout (see above), but it has incorporated one important improvement. On those occasions when the operator wants to pause and chat with friends, the little trains can continue moving around the layout because the track forms a continuous circuit.