Emrys Hopkins designed the HO scale Whitehead Brewery line to fit on a circular baseboard about 24 inches in diameter — the right size to weigh in at three square feet, this website’s guideline for maximum area of micro layouts! Needless to say, the Whitehead could also be built on a rectangular baseboard no smaller than 14″x24″ (a little over two square feet). Notice that the brewery siding has a good length and is located inside the circuit.

If you built this HO line, you would not be able to use the locomotive or car/van shown here! Minimum radius is six inches, which requires a four-wheel, short-wheelbase locomotive like an 0-4-0 steamer, or a Plymouth, Ruston or Deutz switcher–and probably a maximum car length of about 20 scale feet. Four-wheel industrial type cars/wagons fit best. Either standard or narrow gauge will work, the chief difficulty will be in arranging coupllings that can handle the tight curves. One solution is to use link and pin couplers (good for period or industrial pikes), another is to try truck/bogie mounted Kadees. 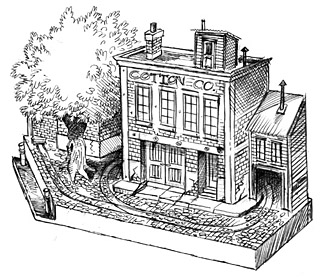 Don Coker’s wonderful sketch of hisSavannah Waterfront railway illustrates another approach–the siding is carriedoutside the circuit. In this case, it serves the quay at the waterfront, for loading and unloading cotton from shipboard.

Don designed this little beauty for Gn15 scale, and in that size it measures 16″x36″. Curves are about 6″ in radius. In other scales the layout could be much smaller, down to about 8″x14″ in HOn30, or even smaller in Nn3!

The buildings are purposefully made large enough to dwarf the little narrow gauge industrial trains, and the giant oak tree is situated where its impressive modeling will show to great effect. This layout breathes the atmosphere of the Southern United States from every square inch!

This scenic 18-inch square design for a single-switch railroad runs from the Junction up to the mine. Hardly Glo Mine is set in the splendid Pennsylvania mountain country that looksexactly like giant mounds covered with lichen!

Down in the valley are the Company houses where the workers live, and an important job of the little railway is to carry the miners up to work and back home again. In between, the trains keep busy hauling whatever it is they mine up there, plus all the supplies that are needed–from pit prop lumber to sorghum molasses in crocks!

By providing access to the short length of lower loop that is hidden under the mountain, you can surreptitiously change trains, empty ore cars, fill supply wagons, and the like. An ore dump worked from inside the mine building would be a nice addition.

Designed for a friend with a flair for stagecraft, Fullcourt Press Printing Inc. uses a couple of unusual “tricks” to present a small industrial tram working inside a factory.

It’s designed as a stage set. A proscenium arch controls the viewer’s sightlines and conceals the light sources. There’s a fairly large backstage area allowing an unseen operator to change consists, reload cars, and the like.

Onstage is a printing plant divided into two areas — a brightly-lighted receiving and storage area in front, and a manufacturing floor dimly visible in the back. A small narrow-gauge tram moves heavy rolls of paper from the offstage loading dock to the printing presses in the back room, and carries finished jobs back to the dock for shipment.

Actually this set could be decorated to represent almost any factory that needs to move large, heavy loads. The machinery in the back room is purposely kept vague (“Phantom Machinery”) so the builder can pick his own industry.

The tram trackage is built into the aging plant’s vintage wooden flooring. A single turnout provides access to the offstage loading dock to bring in raw materials such as paper or to ship finished products like cartons of printed materials.

A small turntable rotates loaded cars 90 degrees so the capstan rope can pull them into the back room. This mechanism needn’t be complicated … it can be as simple as a thread that is fed through a hole in the backdrop and simply pulled by the operator behind the scenes. And it’s dark enough back there to invisibly lift off the load with tweezers once the car arrives — unless you want to build an unloader, which could be a very nice modeling project!

Stage windows, perhaps with photos of the builder’s home town visible through them, bolster the illusion that we’re inside a factory (works). A tape of factory noises will also help the illusion. Adventurous modelers could add smell-o-rama effects … the aroma of printing ink is distinctive and memorable!

With a 6″ radius, this little tram could be built in almost any scale from Gn15 down to HOn2 or even Nn2. Rolling stock will be very small — perhaps a tiny battery- or gas-powered rail tractor with four-wheeled cars (wagons) to suit the product being manufactured. Let your imagination run!

Ian Holmes, who lives in Princeton MN, found an offcut of pink foam 30″ x 16″ and “played with a few ideas (and a Roy C Link rail bender) for a couple hours”. The result — Cuplars Fine Tiles & Ceramics. “Cuplars” … get it?

The layout design is very simple … a small narrow-gauge railroad (in Ian’s case, in Gn15 — 1:24 scale on HO track gauge) serves a tile factory. The little trains bring in raw materials, mostly clay, and haul the finished product — mostly piping — over to the standard gauge interchange (offstage). The “run-through” locomotive shed, straddling the “main line”, is a prototypical feature from a real tilery line in Lincolnshire, England (where Ian grew up).

An unusual feature of the plan is a Holmes trademark — the train turntable. In this case, it’s a sector plate pivoted at its center, to perform “hands-off” backstage reversing of trains, as well as to serve the spur into the tilery, where cars loaded with clay are magically converted to empties and returned to the clay pit.

Here are some early work-in-progress photos of Ian’s construction activities. For more information, see his website. 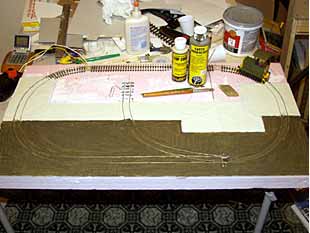 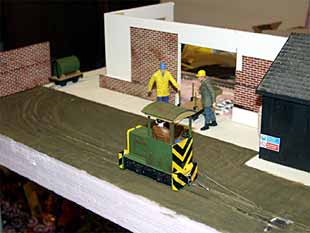 To compensate for the simplicity of the track plan, Ian has devised an interesting operating system for the layout. The system requires two dice — a Situation die and an Operation die. Ian explains, “First you would throw the Situation die.

“A throw of 1 or 3 would refer to goods INTO the factory.

“A throw of 5 would be factory in production but NO railway activity.

“A throw of 6 would be a set of PROBLEMS to disrupt the everyday operation.

“Let’s say you threw a 1 on the Situation die. Then a throw of the Operation die tells you what you have to do to cover that situation. A throw of 1 might be one load of clay to the unloading area., while a throw of 2 might be two loads of clay. As you are only operating one wagon at a time, that would mean you need to run a full wagon to the unloader, empty it, run back out to the clay pit to fetch another load, and return. A throw of 3 might be three loads of clay. A throw of 4 might be fuel oil or coal into the factory to fire the kiln. A 5 could be a load of empty pallets in for loading, etc.

“Throwing the Operation die for goods OUT would cover finished products leaving the factory such as a wagon load of tiles or pots as well as waste material.

“The PROBLEMS are up to your imagination. The obvious situation would be “locomotive failure, need to replace loco”. Another situation might be “excavator at the clay pit needs a minor repair”. For this, a flat wagon loaded down with tools and spare parts could leave the factory for the clay pit. And so on.”

The possibilities are as limitless as your imagination! Soon you can be operating very much like a real railroad at this tiny tilery. Although the “die-casting” operations system did not originate with Ian, I think this is one of the cleverest implementations I’ve seen!

Coincidentally, I received photos of another layout using nearly the same plan from Roger S. Jansson, who lives in Frövi, Sweden. I include these delightful pictures here to illustrate how differently two modelers can treat very similar track plans. 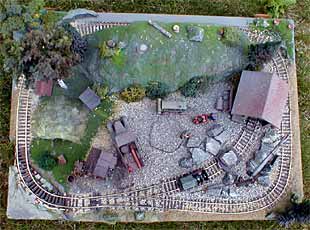 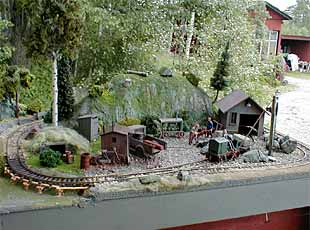 This layout depicts a typical Swedish Stone Quarry. Roger built it on a desk drawer turned upside down (the first time I’ve heard of that particular baseboard source!). The On30/O-16.5 layout is 575×410 mm (23×16 in) and uses Tillig flex track and a Peco turnout. For a look at some more of Roger’s O scale narrow-gauge models, see his website.