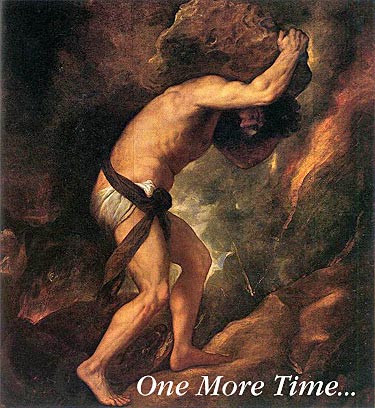 One mark of a good layout is when it continually calls you back with new ideas and new additions. Often these “second thoughts” are both imaginative and inspiring. So occasionally we offer you a page that describes new developments on layouts we’ve all seen before (either once or several times). Here’s a current crop of additions to familiar layouts, viewed “One More Time” and providing us some more inspiration to spur our own efforts!

ChicagO Fork is an ingenious O-scale switching shelf that first appeared in Scrapbook #97a. It was built by Prof Klyzlr, a well-known pseudonymous modeler from Sydney, Australia, in response to a challenge from a local O-scale group to “build a so-called micro layout that will handle full-sized U.S. equipment in O scale!” The result measures 1x4ft (30x120cm) plus a four-foot (120cm) extension with a hidden sector plate. It can use husky diesel road switchers and both 40- and 50-foot Hi-Cube boxcars.

Carl Arendt then drew up an HO-scale version of the layout, ChicagHO Fork (see Scrapbook #98a). The pocket version measures 24x6in (60x15cm) with a 24in (60cm) fiddle yard.

Now Prof has actually built the HO version, and displayed it side by side with the O-scale layout (now owned by someone else) at an exhibition late last month (photo above). The HO version has several new developments, most notably its lighting, contained in the ceiling of the “monobody” baseboard/backboard design that Prof uses. After much experimentation, he settled on gimlet-mounted halogen lighting fixtures, and used two of them in the HO design. The nuts and bolts of this solution are outlined in excruciating detail in the Small Layout Design forum on Yahoo! (you may have to become a member to read it. That’s free).

Further, it has occurred to both Messrs. Klyzlr and Arendt that ChicagHO Fork is an excellent “beginner’s layout” for HO standard gauge modeling. Requiring virtually no space and just one turnout, the little layout provides excellent prototypical switching opportunities, as outlined in Scrapbook #98a.

Prof, who had prepared some special “proto-nook” switching sessions for the exhibition, was disappointed that very few people had time to actually try out either layout. And no one could be persuaded to participate in the “head-to-head switching rodeo” he had planned, using both layouts in timed competition. Ah, well… perhaps they were intimidated by his personal skill at such operations. If you’re ever offered an opportunity to run trains on a Chicago Fork layout (any scale), take it! Or better yet, build your own! 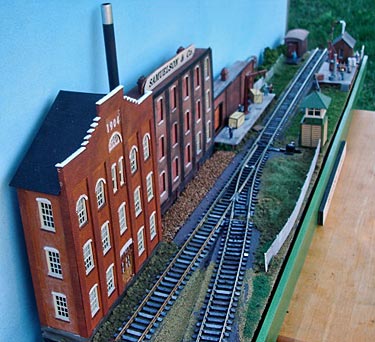 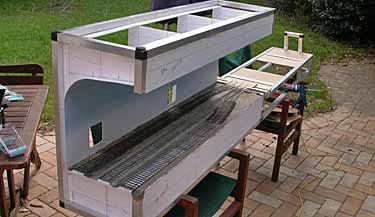 Will Ayerst, from London, England, unveiled his plan for Southwark Park in Scrapbook #101. It’s a big-city passenger terminal in ScaleSeven (finescale O gauge with very large radii). The original design measured 15 feet long overall and was 9ft long in the visible central portion, where the throat is. Now, Will has been thinking about it, and found ways to reduce the center part to just 6½ft (see diagram)! How? By carefully adjusting switch placement, adding a lap switch and scrupulously calculating track lengths actually required. There’s not a lot of wiggle room in ScaleSeven!

Will’s comment on the new design: “Depending on era, staging would dictate the overall size of the layout. I guess that approximately a hundred feet of hidden space would be best—that would cover any British locomotive plus a section of the coach behind it. In pre-Grouping mode it would probably extend to a tender locomotive and a couple of 35ft wheelbase six-wheelers. With that in mind, staging on the left would need to be about 2½ft, and on the right the traverser would occupy around 3ft, bringing the overall layout length to less than 13 feet.” In minimum space planning, every inch or centimeter is important! (For a similar exercise in HO, see “Honey, I Shrunk the Tymesaver!” in our Micro Gallery.) 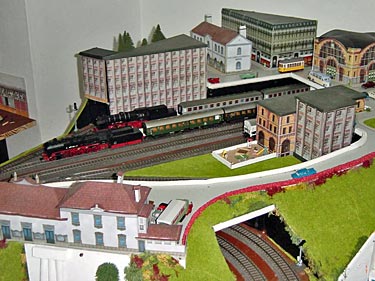 In Scrapbook #86a, Henning Stelter, a German currently resident in Portugal, introduced us to his work in progress, Hohlberg (“Hollow Hill”). He cunningly coiled a multi-track dogbone into a 183x105cm (72x41in) space in his laundry room. Now, after two house moves, he’s ready to show the layout in its nearly-complete condition.

Principle scenic additions are all made of paper—buildings that have been printed via Henning’s computer, glued to art board, cut out and assembled. The “downtown” feeling of the Big City is much stronger now. And he’s been working on the operating patterns possible as trains chuff slowly up the Big Hill and zoom down it. A couple of YouTube videos—here and here—give a good idea of the operations he can enjoy on this tiny metropolitan layout (video shot with an iPod camera). 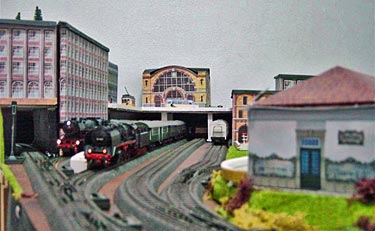 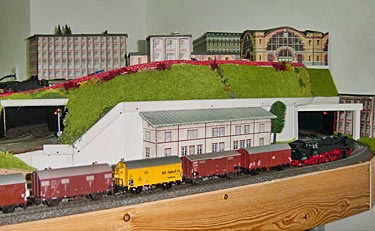 While browsing the “Gumstumping” material on this site, Rob Carpenter, from Seymour, Victoria, Australia, was reminded of a local Melbourne station, Victoria Park—and he figured he could build it in N scale as a T-TRAK module (top left). The main line is elevated and connected at grade with the lower level switching district. The red underpass is added. After tracklaying, the layout looked like lower left. Display, with scenery, is planned this month at the Wagga Wagga Exhibition. [Note: Rob claims it meets this site’s “stand alone” rule by running on DCC and using the main lines as a fiddle yard in stand-alone mode. You be the judge!]

In the wake of last month’s article on Tuning Fork Layouts, Briton Trevor Perry sent the plan of his under-construction N scale scene from Col. Stephens’ light railway line, the East Kent Railway, which flourished from 1911 to 1951. Trevor has zeroed in on the area around Wingham (Canterbury Road), which served as the northern terminus of the line. A planned extension never happened, so the station sits in a cutting that extends 500 yards beyond the railhead. Trevor’s model station measures 4x1ft (120x30cm) with a 10-inch (25cm) cassette at the right end.

Trevor explains the station’s appeal: “The really interesting thing about the operations at the terminus here was that ‘running round’ was achieved by gravity. The train would stop just short of the siding, loco uncoupled and pulled into the siding. The coach then had the brakes released and arrived in the platform by gravity. Sometimes goods trains were dealt with the same way.

“My plan to replicate the gravity running round is this: the uncoupling ramp on the main line just short of the siding also acts as a brake on the coach while the loco pulls into the siding. To stop the coach at the bottom of the grade, use will be made of springy grass (this is used by Roger Nicholls as an uncoupler on many of his HO layouts). Several rows of stringy grass would provide a brake for the coach or wagon before it reached the end of line. There was no buffer stop, only a sleeper (cross-tie) laid on top of the rails.” 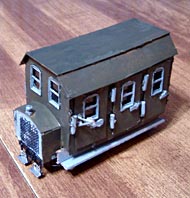 Another addition to our Tuning Fork collection is provided by Joshua Wolfe, from Pensacola, Florida USA. Josh needs a very small layout to use while he’s in college. His solution is a 27x9in (69x23cm) Gn15 line, which runs from a mine (at left) to a very small port. The “middle part” is simply left out (represented by the blue diagonal line) with the imaginary distance between the two ends lost in a short forested view block.

Josh discloses, “The line has a railbus which I built (above right) to provide passenger service from the port to the mine… For rolling stock, I plan to use several Bachmann On30 V-skips and a gas-mech diesel converted to Gn15, along with a little wooden flat car for general freight.”

Long-time logging layout lover Lennart Elg, from Åkersberga, Sweden, has contributed a new large-scale Tuning Fork design. He explains, “I am currently planning a small logging shelf layout in On30, but I also have a set of large scale logging equipment from a previous project. When I came across the ‘tuning fork’ projects I decided to see what could be done in large scale, in my limited space (I first tried to design an Inglenook, but the third track left no room for scenery).

“The concept is simple. Logging started along the shore of a river inlet somewhere around Puget Sound. After the easy pickings had been taken, a small railroad was built to reach lumber farther from the shore. Logs are dumped into the river, bundled into log rafts which are towed to a sawmill located off scene downstream, where finished lumber can be shipped to the market in California.”

On30 LAYOUT IS OVERRUN BY Gn15 VERSION WITH NEW SCENERY 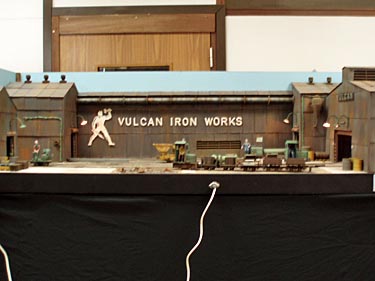 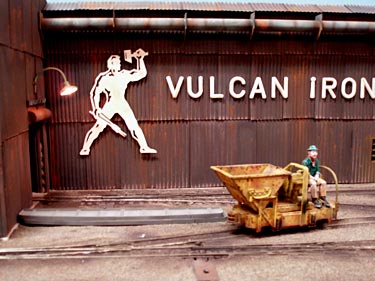 Franck Combe, from Asniéres sur Seine, France, has been converting an On30 layout project into his newest enthusiasm, Gn15, as reported in Scrapbook #101. Besides exchanging the rolling stock, he found that most of the effort was in changing details of the scenery. “Glen Anthony [an excellent Gn15 modeler from New Zealand] gave me the idea to re-use some  buildings and just resize the doors,” Franck comments. “I removed details that were definitely out of scale, trimmed all the other doors to resize them, and removed all the out-of-scale corrugated iron to add new sheets. I also removed the lamps and added new ones… The layout is not completely finished. I have to add figures, details, and so on.”

Sounds a lot like Paul Bunyan’s axe, which was as good as new after 50 years, having received only five new heads and 14 new handles during that time. But I think you’ll agree, Franck’s results are very appealing and appropriate. The layout measures 140x45cm (55x16in). Franck has an album of many more photos here. 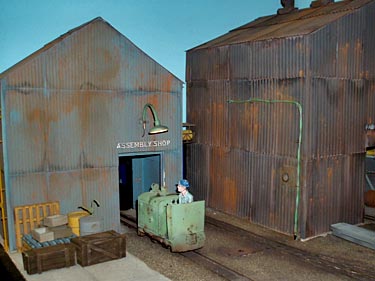 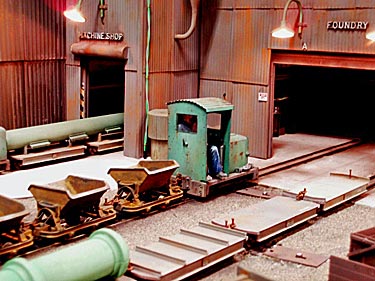 Inspired by the Harlem Station car ferry yard description in Scrapbook #88, Matthieu Lachance, from Québec City, Canada, has been working on “shrinking” the design as far as possible “without losing the general feeling and track arrangement of this very special terminal.” By using curved turnouts, a trapezium-shaped table and various other tricks, he produced this yard in a 66x45in (168x114cm) space—it retains compressed versions of all the original tracks and holds 42 cars (the original held only 55) plus a 10-car, 2-track movable car float used as a fiddle yard.

Matthieu drew the plans for the Freight Station (below), working from photographs of the original building online. He explains, “I’m a professional architect, so it’s my daily job to survey buildings, and sometimes I have to draw plans with only photographs and a footprint… [This selectively compressed building] is 75% of the full-sized prototype. I absolutely wanted the original prototype on the layout to keep the sense of the place. The black and white signage near the roof is also very characteristic. With its long loading dock and multi-door facade, this building can accommodate cars from all eras. It will be useful since I have a lot of 36-, 40- and 50-foot American cars.” 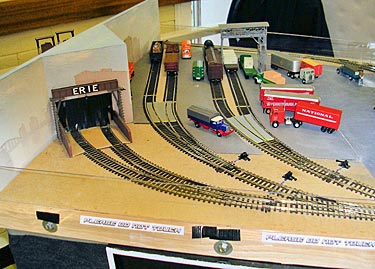 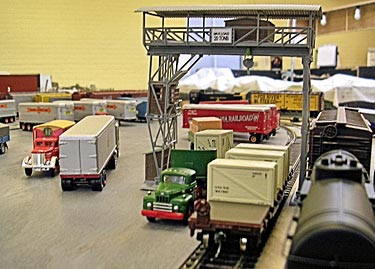 We last visited “Shortliner” Jack Trollope’s work in progress, Harlem Station, in Scrapbook #96a. Jack’s HO version of the Erie car ferry yard in New York City is squeezed down to 46x28in (117x71cm) by leaving out a few tracks and drastically shortening the rest. He too uses curved turnouts to save space. Operation, however, is essentially exactly like the prototype.

In mid-September, Jack exhibited the layout for the first time at the Inverness & District MRC Annual Exhibition in Scotland. The layout has reached the “detailing” stage, shown in these photos taken at the exhibition. For more, see Jack’s thread at the Model Trains International Forum. Jack lives way up in the northern Highlands of Scotland. 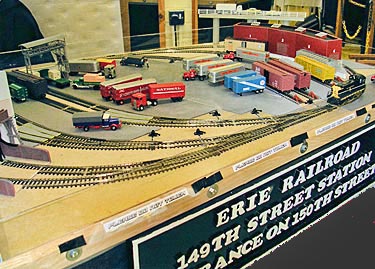 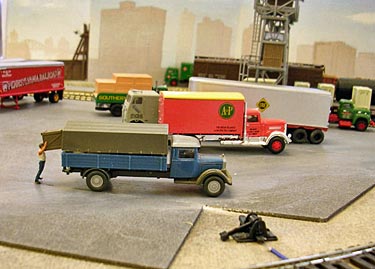 In case you missed it: The December 2010 issue of the U.S. magazine, Railroad Model Craftsman, has an Editor’s Notebook column titled, “Mini and micro layouts.” It’s an appraisal by RMC Editor Bill Schaumburg of minimum-space modeling in general, along with photos of several layouts, most of which have also appeared in these pages. This site gets a mention as well. This issue is still on the newsstands—see pp. 106-108.