After almost a year of silence, a new update! The first in a series of new, regular updates. 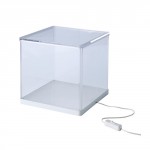 As you might have read, I started a competition last year, to make a micro layout that fits in an IKEA Synas box. I will show you the submissions on this page. Please comment below to let everyone know which layout you like best!

Flatpack layout plan from Lucas from the Netherlands 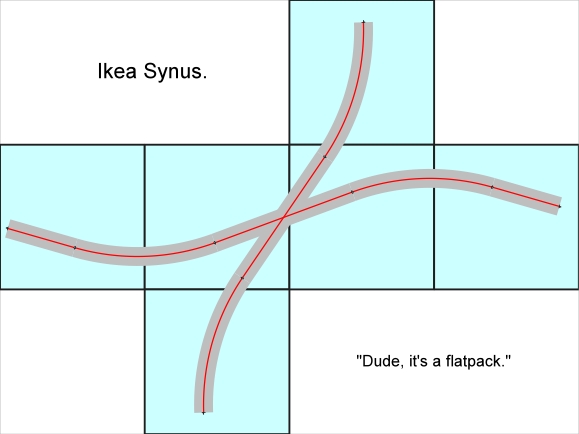 When I received the email suggesting a summertime competition I started thinking. The first thought to come to me was that it would be a winter project for us in the southern hemisphere, but that was hardly a problem. A quick look at a ruler exposed the real problem, 9 cubic inches isn’t a very big space.

I am lucky that I have a fleet of Hong Kong trams that I purchased on a holiday a few years back but had never got round to building a layout to display them on, what a perfect opportunity. So what could I do with them in that space? I was looking for a way to display them in a crowded street scene representing Hong Kong but didn’t have the ability / courage to try and build hand laid track with sharp radii or the modeling required for high density buildings.

I found a 90 degree crossing track and positioned it diagonally to maximize length of each run. With track laid and wired I began building up the road surface using wood and plaster. (A big learning experience for me.) Once the concept was proven and test runs proved successful, the next task was to go 3D. Street scene images found on the net were printed and pasted into backdrops and around pvc angle to give depth perception. Some signs were cut from images and pasted strategically to also give some depth. Once all this was completed I started to add details such as street furniture, bin, hydrant, relay box and drink machine. Then street poles for supporting the trolley wire were added. These were made from copper tube and had brass wire soldered into position to depict support and contact wire. Very small beads were also used to represent insulators. The trolley wire is not “live” (the trams “spear” their poles in one direction, so do not actually make contact with the wire.) Traffic lights were made from styrene angle and tube with craft jewels positioned and then glued to the poles. Lastly the scene was populated with pedestrians and motor vehicles “squeezed” into position.

Control of the trams is by two DPDT centre off switches. Both trams can be operated at once but a collision will occur such is the limited space available. Therefore it is a sequenced mode of operation that someone with more electrical ability could probably automate, (but I’m content to flick switches.) The external walls were painted and laminated images relating to Hong Kong trams glued into position to provide decoration. All up this has taken about 15 hours to complete and has been great fun. 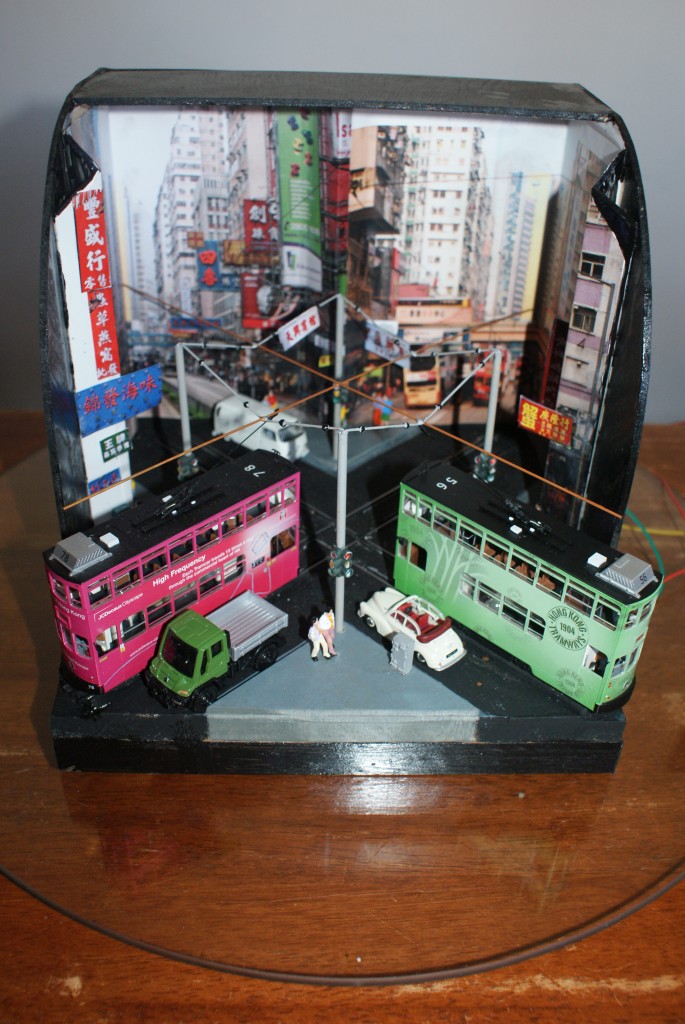 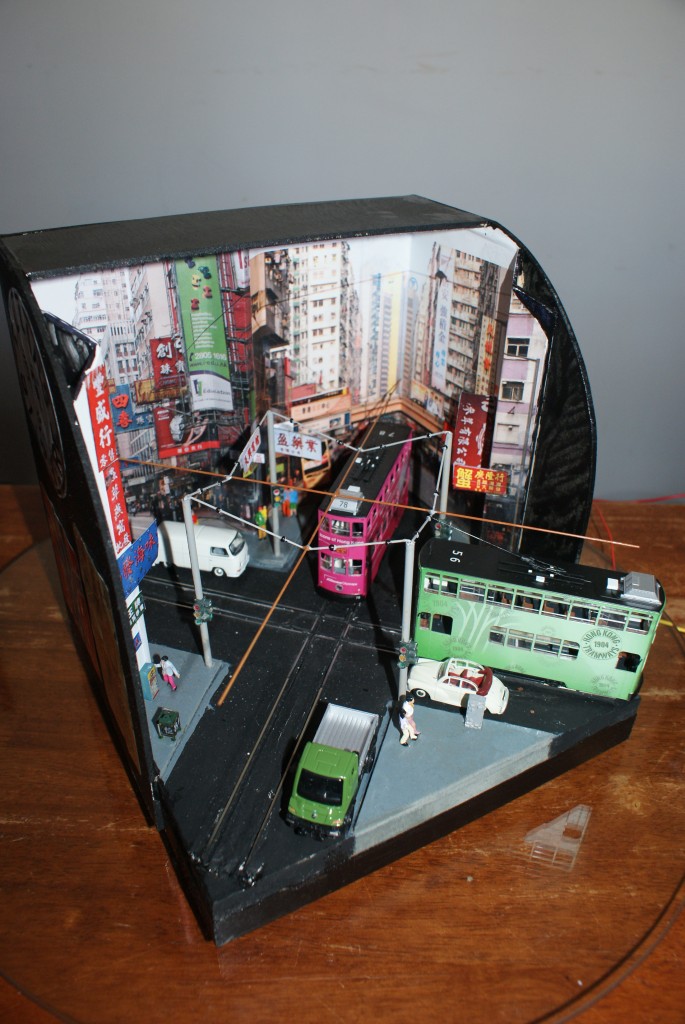 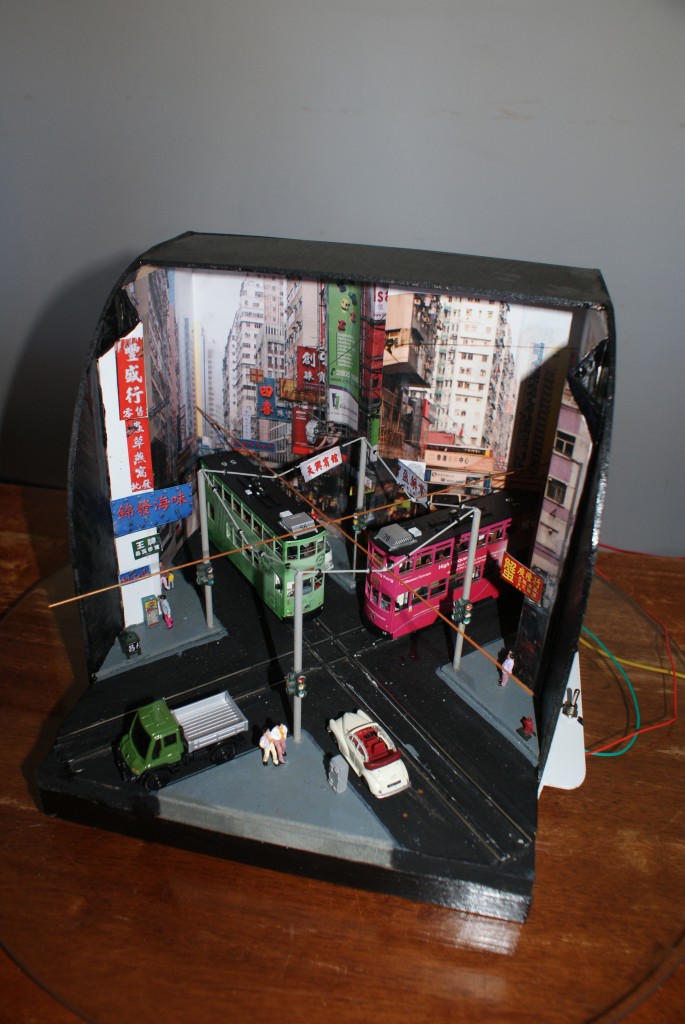 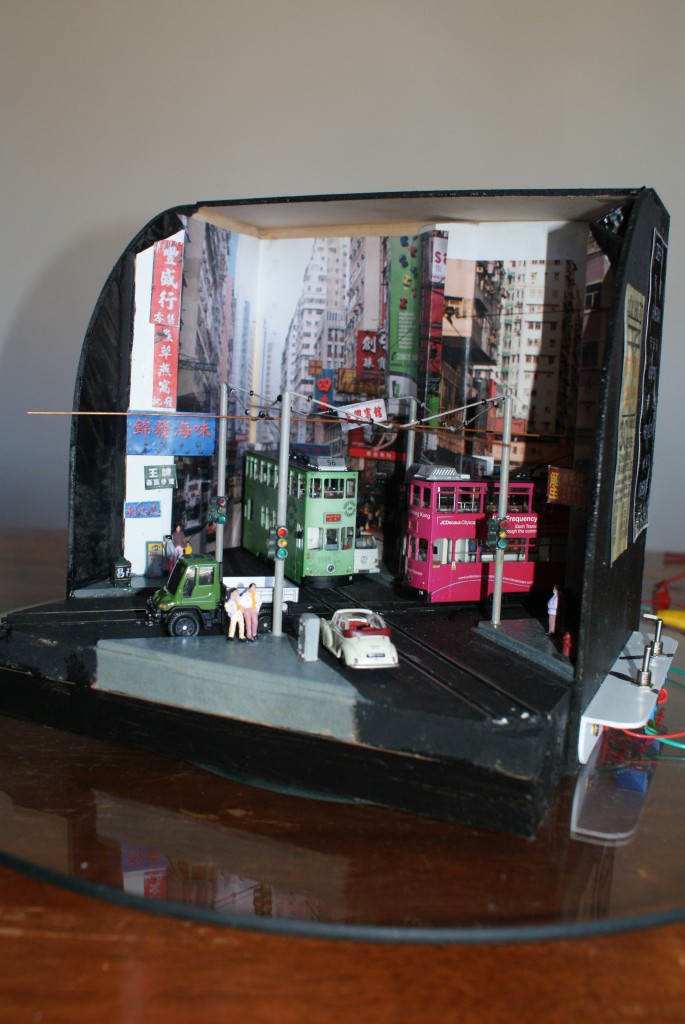 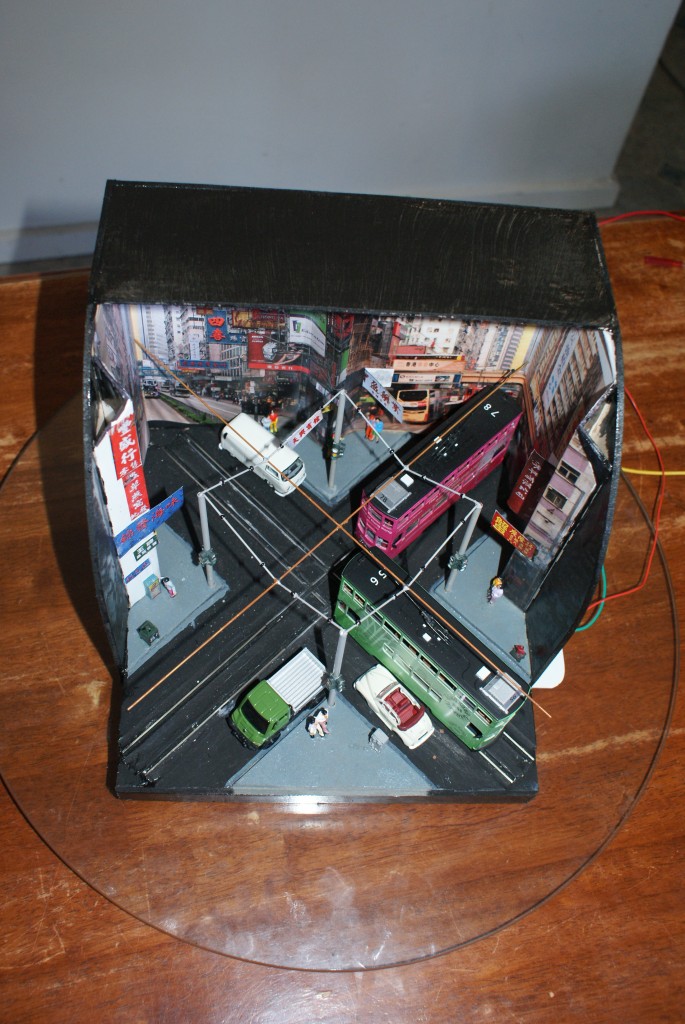 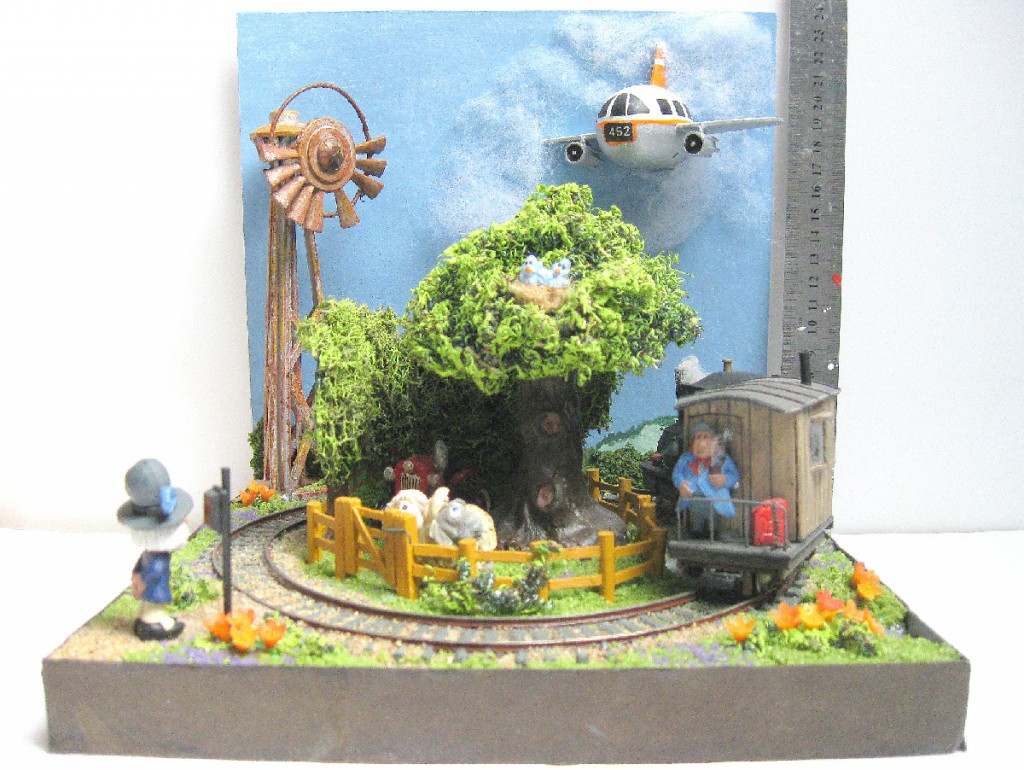 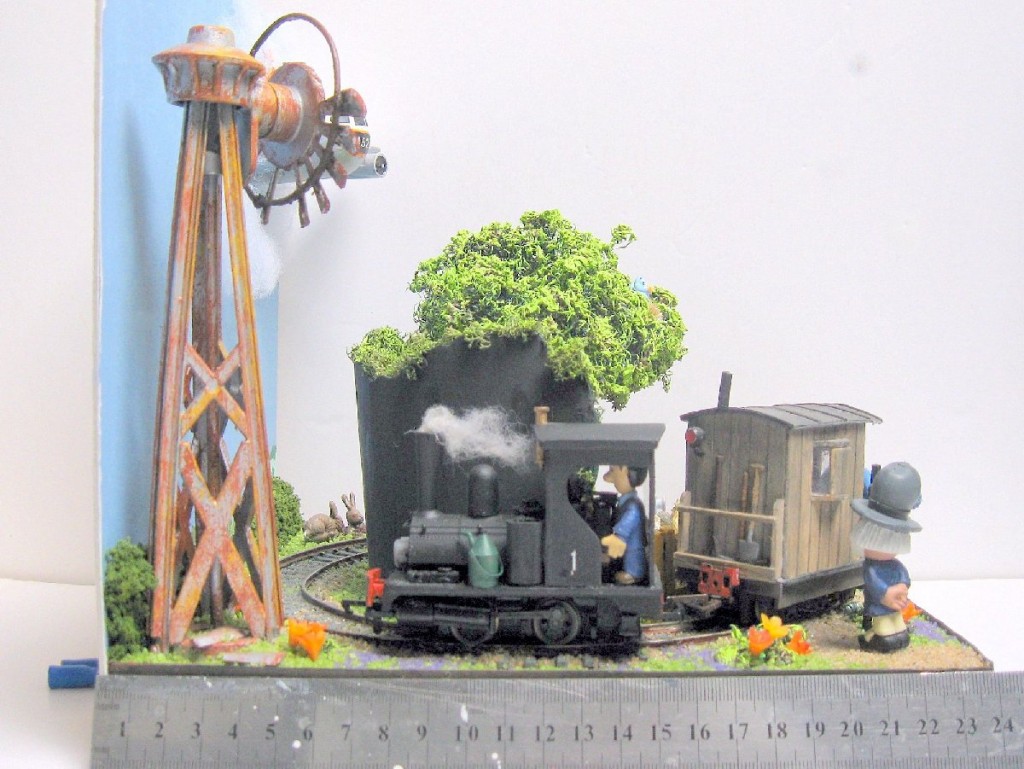 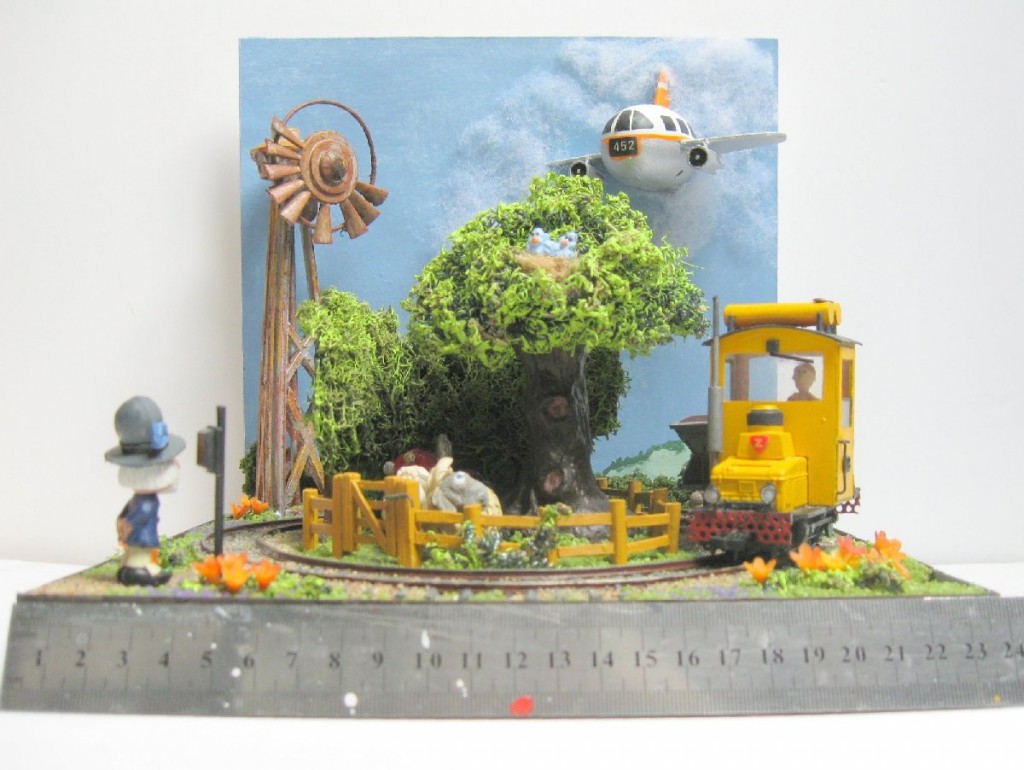 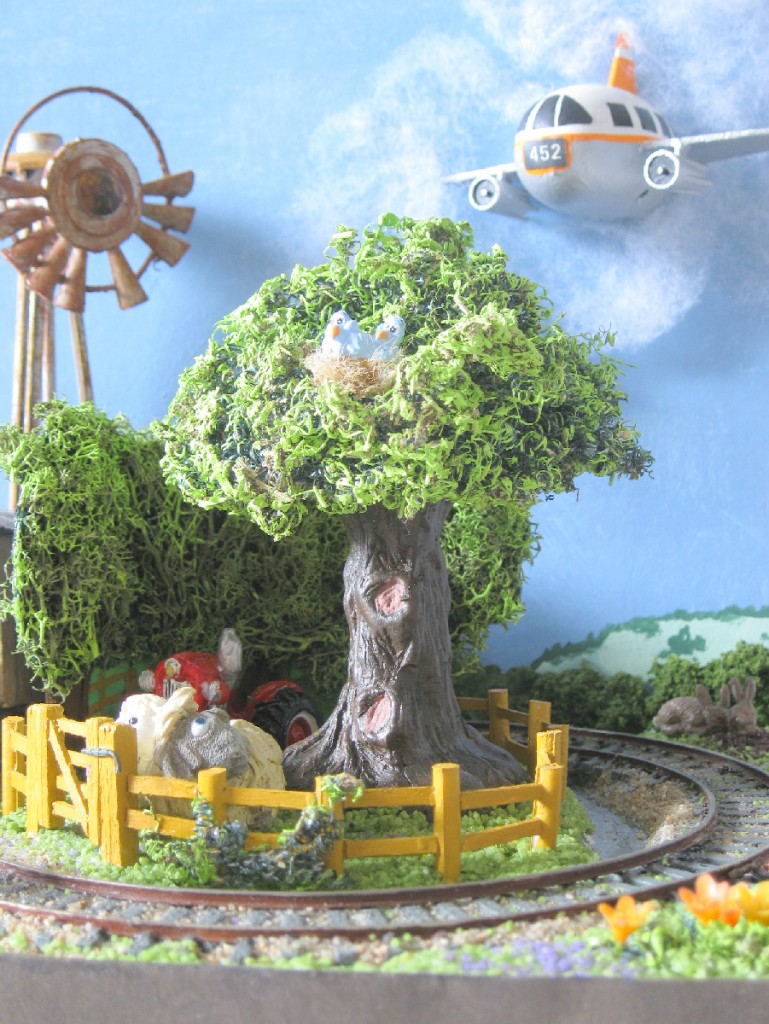 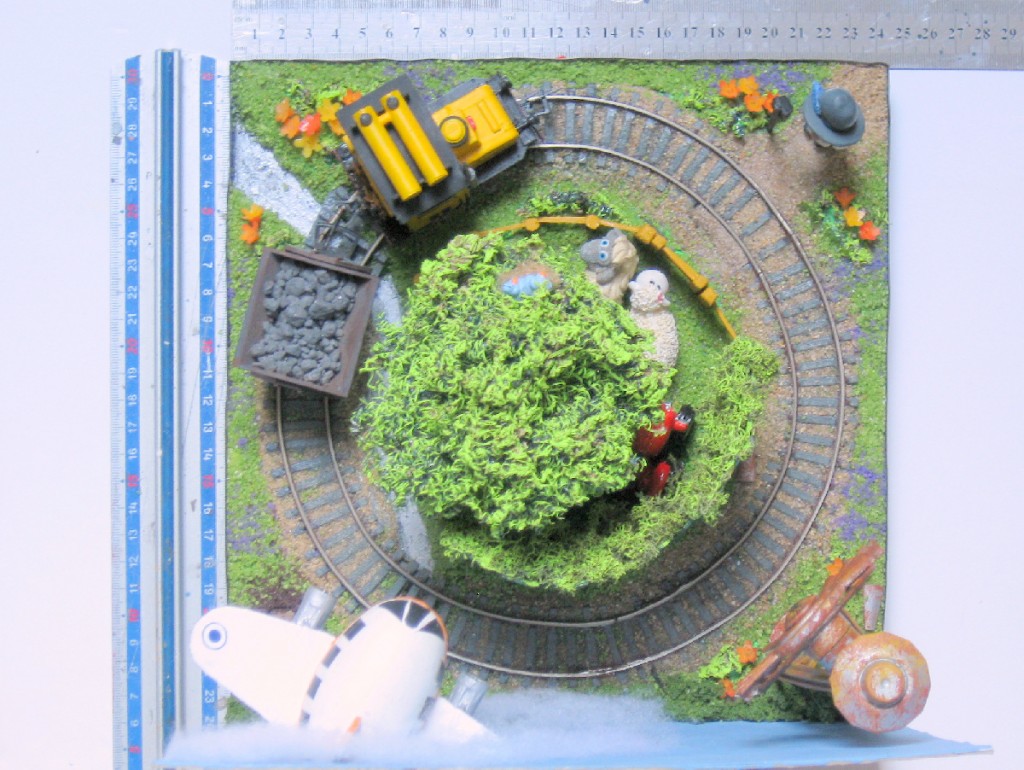 A Rural Railway in France

The model is the same sort of scale as my main model railway “Monjouet” – a bit of a mix of O30n and 7mm:ft narrow gauge.

It is built on a wooden base, 24cm square. I couldn’t afford the Ikea light box together with its post and packing costs, so there is no cover for the layout, but I have added a 24cm high back scene which I hope will be considered acceptable under the 24x24x24cm size limitation.

The scene depicts a little of the local French countryside (though sadly trains no longer run around here). A layer of 5mm foam board is glued to the baseboard, with a meandering stream cut out, bordering a large tree. (This was a model olive tree, bought on holiday in Provence, which was intended for Monjouet, but which turned out to be too big to fit on the already crowded layout so joined my ‘one day this may come in handy’ collection of oddments.)

The track is left over bits of OO from older layouts, joined together into a circle. Ground cover is coloured sand with little plastic flowers inserted here and there. Engines and wagons are borrowed from Monjouet and are:- an OO Dapol Pug, adapted to 7mmNg with a bigger cab, etc., and a seriously butchered HO Brawa electric shunter (built up and converted to ‘diesel’). To give the trains somewhere to disappear to, I made a intermediary backdrop of card, fronted with painted trees with lichen foliage.

To add height to the scene, I made a wind-driven water pump using a fan from some long-forgotten piece of worn-out household equipment (another item from my ‘may be useful one day’ store). I decided to make this into something of a ‘has-been’ by breaking off half the fan blades and adding a fair bit of ‘rust’ – I include a photo of the example which inspired this, just up the road from where I live. To fill another bit of space on the back scene I modelled an airliner breaking through the clouds. (I guess the pilot will be hauling back on the stick desperately as he finds himself rather nearer the ground than he would wish for!) The body of the plane is part of a plastic key fob thingy that once contained some little model pigs (now enjoying the open air in Monjouet). Wings and tail are from card and engines are made from caps of super glue tubes (very little gets thrown away in my house!).

No French farm is complete without a dilapidated tractor rotting away in the corner of a field. Mine came with a wire with a small crocodile clip on the end sticking out of it, and was intended to be used a place setting marker at a dinner party.

I prefer cartoon figures to the somewhat staid models offered by model railway accessories suppliers, so buy most of mine from street fairs, where maturing children off-load their childish toys to this childish old man! They include two sheep, one of which is interested in the bluebird nest in the tree above, a couple of rabbits, and a farm worker surveying his flock – who is from the Kinder Egg® Magic Roundabout series. These have all come from my ‘people’ stock box. The train drivers, also toys rather than ‘models’, arrived from Monjouet already ensconced in their charges.

No doubt there will be some superbly crafted entries, which will leave mine standing in terms of professionalism, but I hope some readers will find this economy model (the only items specially bought for this project were the sprig of little flowers and the tractor) interesting at least. I certainly enjoyed making it. 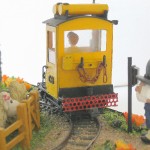 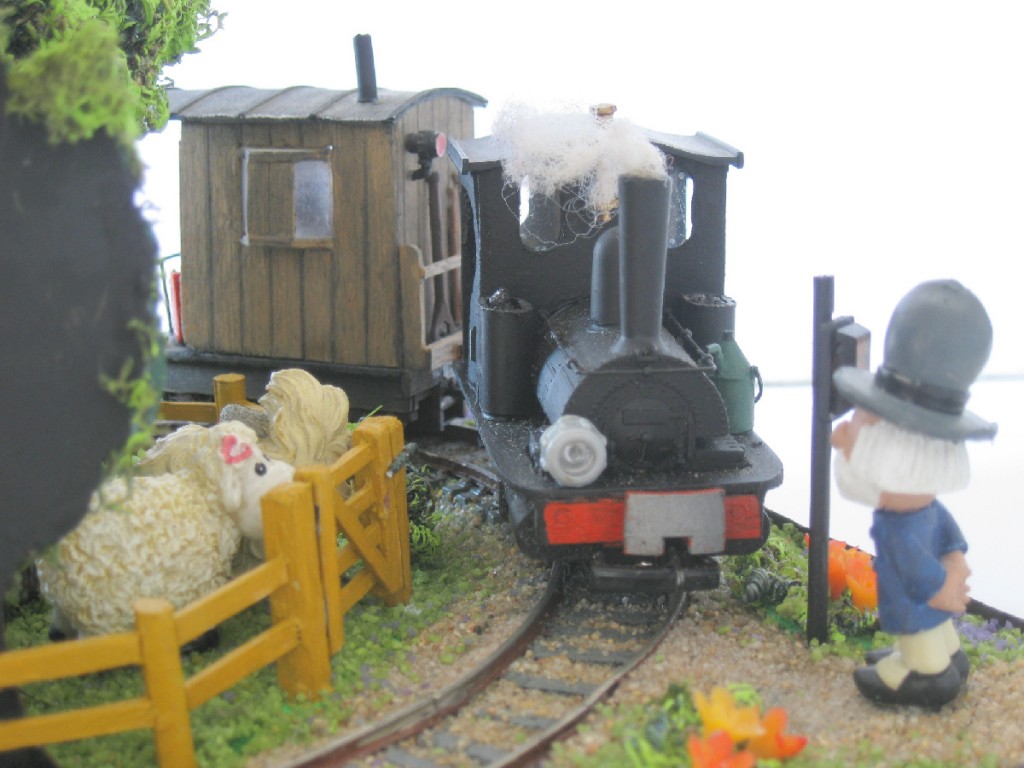 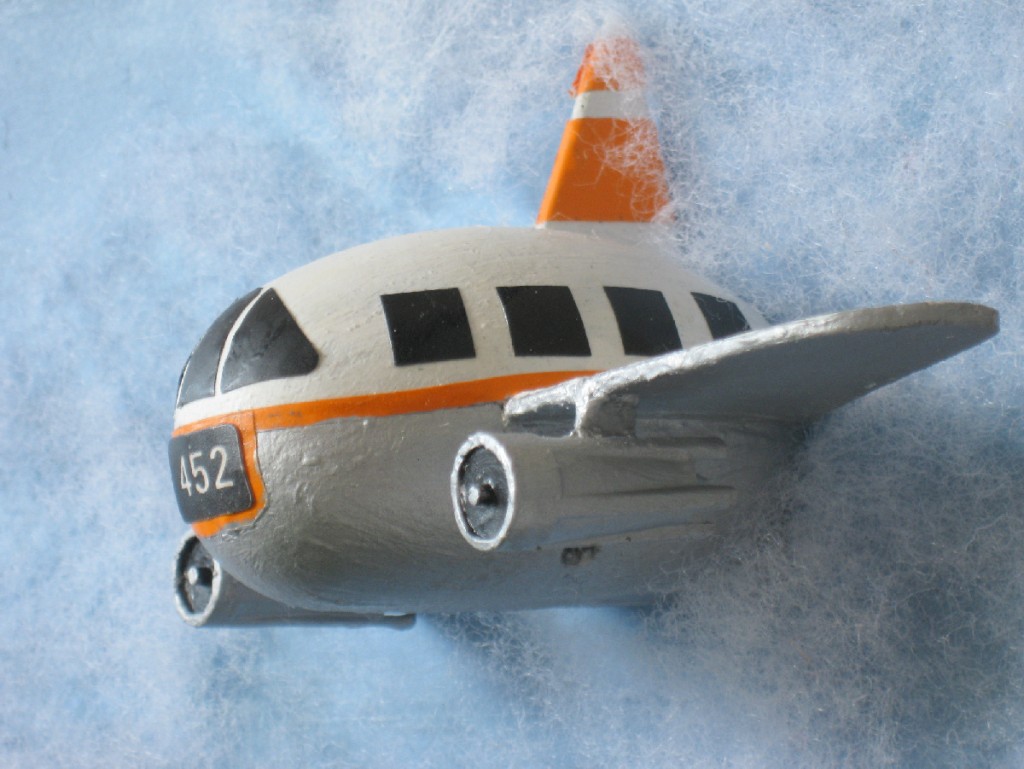 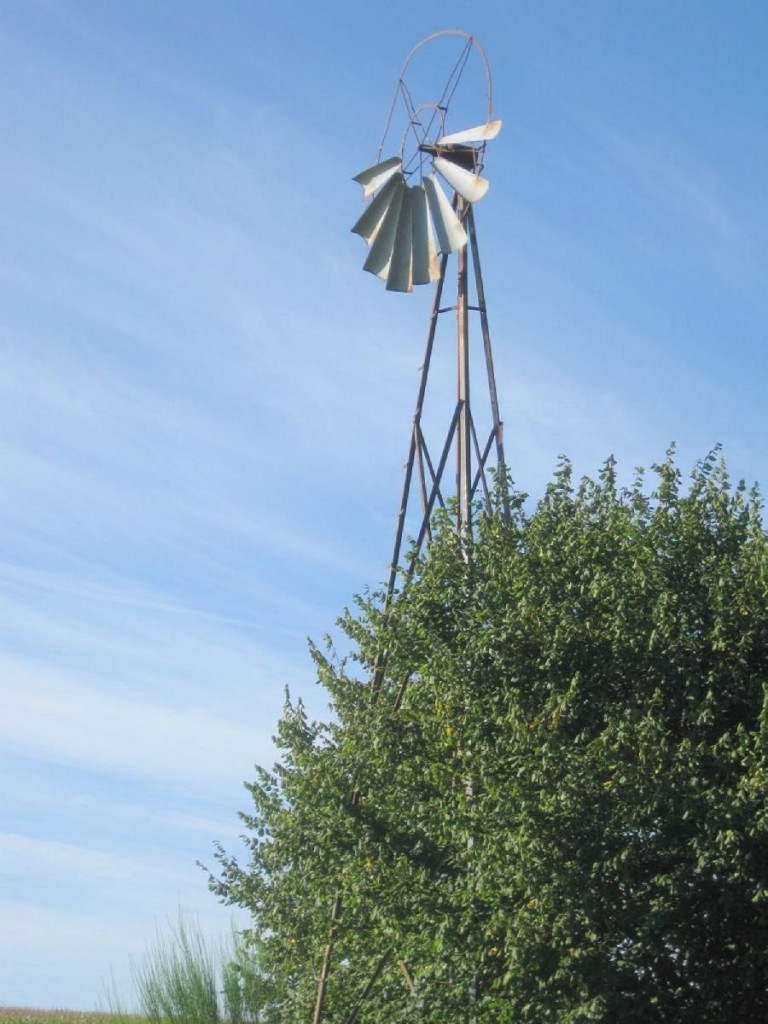