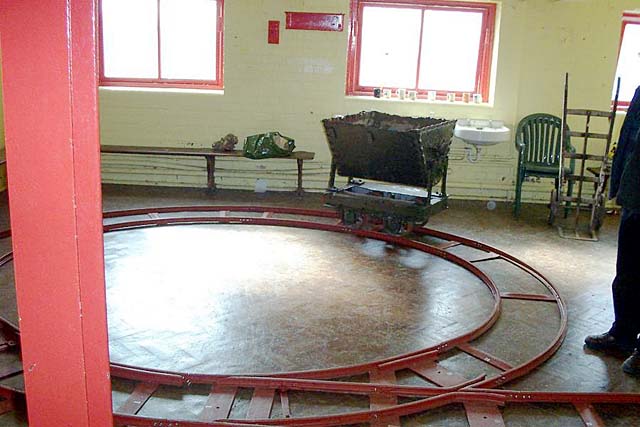 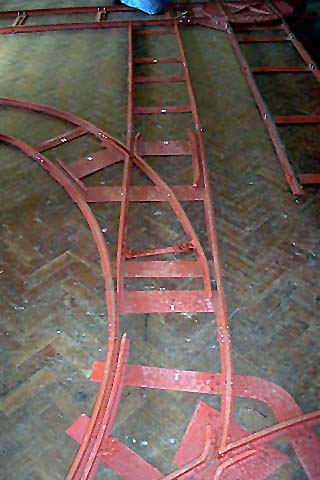 Steve Bennett, of Black Dog Mining Co. fame, kindly forwarded these photos of Decauville portable railways displayed at a model railway show. The gauge is 40 cm (15.75″) and the diameter of the circles, 4 metres (about 13′).

The French firm of Decauville was one of the world’s leading suppliers of industrial narrow-gauge equipment and trackage, and these carefully-restored items of prototype “snap track” date from the 1890’s.

The overall length of the Decauville skip wagon is 3′ (90 cm) and the frames are a little over 2′ wide (60 cm). The skip itself is 1 metre wide (3′ 3″). The original wheels and axleboxes/journals were replaced by the British firm, Robert Hudson, sometime in the last 20 years–but for completeness these are 9″ (23 cm) diameter curved spoked, with a tread width of 2″ (5 cm).

This material was displayed at a model exhibition in Leeds, England during March 2003 by the Narrow Gauge Railway Society. The equipment is privately owned. 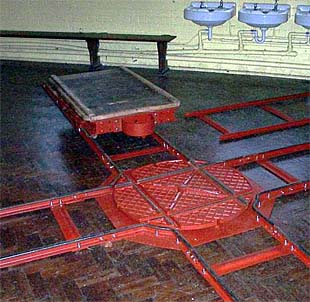 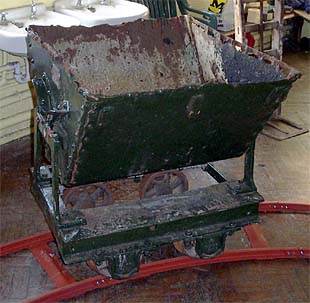 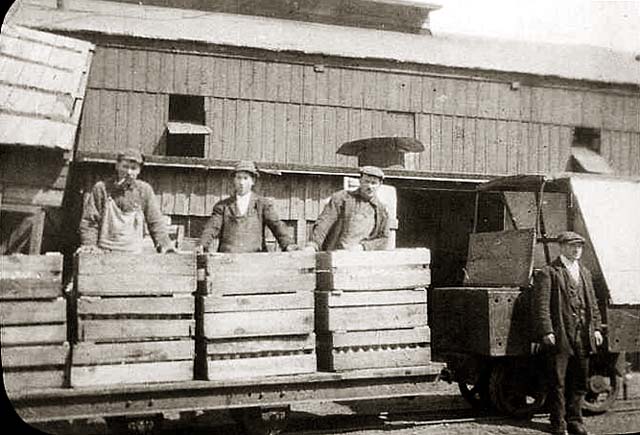 Bill Chestnut, who lives in Bridgeton, New Jersey, forwarded these archive photos of a narrow gauge railway serving the Cumberland Glass Manufacturing Co. in Bridgeton, about 1915. In the photo above, the battery-powered locomotive looks like a homemade unit. It features two large battery boxes, a frequent feature of early battery locos. Using one box provided slow speed, and adding the second shifted into “high”! The “train” comprises a flat car loaded with crates of glass bottles, ready for shipment.

Bill found these glass lantern slides in the files of the Bridgeton Antiquarian League, of which he is vice president. The photographer was Clayton McPherson. Below are two more lantern slides from the set, which must have been used to illustrate a lecture on the glass industry. One of the primary products of the Cumberland plant, c. 1915, were the famous cobalt blue bottles used for Bromo Seltzer. They all left the factory on these narrow-gauge rails (looks like about 18″ gauge)!

Anyone who has some more information about this early industrial railway is requested to get in touch with Bill at the League’s address. Meantime, he’s begun a Gn15 layout based on the little line! 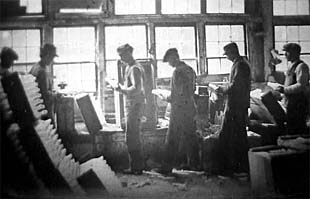 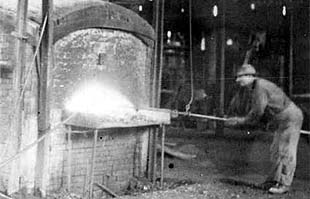