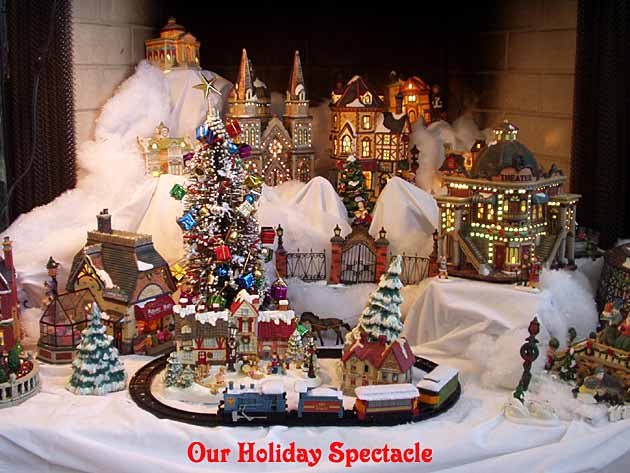 A Sparkling Survey
of Scales for Small Spaces

John Tryon Hubbard, who lives in Florida, has found an unusual venue for constructing his family’s holiday railway — he put it in the fireplace, along with his wife’s Dickens Village! The train is a Burger King Anastasia special that John found on eBay. I think it adds an attractive glitter to our December issue, and you may want to add “Fireplace” to your list of unusual places to build layouts! (For more about John’s hobby, visit his website.)

And now to work. Our theme this month is a Survey of Scales that can be used for small layouts — from the tiniest scale to the largest. And every example is from a different country. Happy holidays to all! 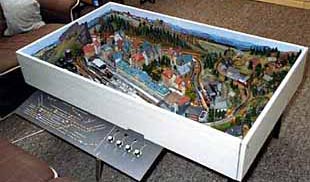 A maestro of Märklin Z Club scale is Jo Schlenker, who lives in Stuttgart, Germany. Illustrated here are just two of a large number of Z-scale layouts that Jo has constructed in places ranging from a coffee table to a desk drawer to a very-small briefcase.

Two of Jo’s creations are illustrated above, along with a closeup of his excellent scenery work at right. To see much more of Jo’s activities in this tiny scale, visit his website. 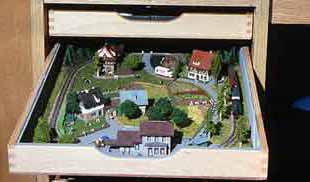 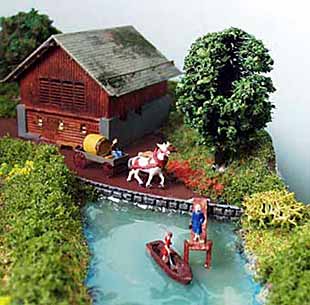 Ken Jones, from Birmingham, England, specializes in fitting N-scale working layouts into small containers. His oeuvre to date includes a continuous layout in a 1960’s suitcase, a shunting yard in a cinema usherette’s ice cream tray, and a continuous layout in a box file. The first and third of these are pictured below. The suitcase layout, Waterfall Junction (left), measures 60×46 cm (23×18 in), while the box file layout, Pending (right), is about 10×14 inches. Visit Ken’s website for more information and to see more of Ken’s layouts.

N scale, with a gauge of 9mm, is very popular for building very small layouts. 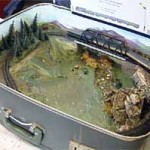 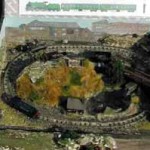 HO scale remains the most popular size of model layouts in the U.S., and not surprisingly a great many excellent small layouts have been designed for this scale. Shown here is a work-in-progress picture of Jeff Hartmann’s variation on Jack Trollope’s classic Box Street Yard. Jeff’s HO standard-gauge layout, Las Cajas Avenue, uses old-time cars (because they’re shorter) and measures just 36×9.25 inches (90×24 cm).

This photo represents an update to our previous coverage of this elegant little layout in Scrapbook #15. You can keep track of Jeff’s progress at his website. Jeff’s from Long Beach, California, U.S.A.

With a track gauge of 16.5 mm, HO scale is an excellent size for small layout design, with a remarkable amount of material available in hobby stores to help construction. The same gauge is used in Britain for the popular OO scale (4mm to the foot). 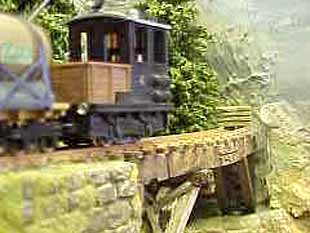 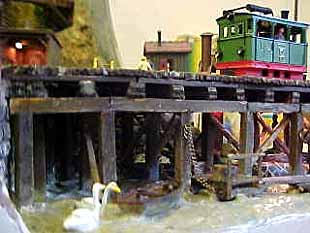 Narrow gauge versions of all these scales are also often used in small layouts. A very attractive example is this condensed HOe layout, Île Ne Saispas, built by “Nomm D. Pleum” in the Netherlands. Best known perhaps as a collector (and dealer) of Egger-Bahn narrow gauge trains, “Nomm” has constructed this scenic layout to show off his narrow-gauge rolling stock. The actual measurements of the layout are a secret — “Nomm” says that visitors are often amazed at how small it is! You can see many more views of his trains and scenery at his website.

Track gauge for HOe trains is 9mm, the same as N scale. It represents about 30-inch or 750mm narrow gauge prototypes. 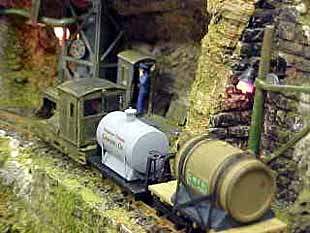 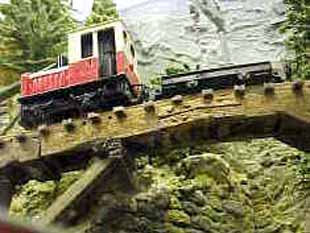 UPDATE — Responding to a number of your requests, “Nomm” has kindly provided a track plan of the Île Ne Saispas, along with an aerial photo taken especially for Small Layout Scrapbook. At last, the layout dimensions are revealed! Note: most of the upper level is carved into the rock and not visible from the air. 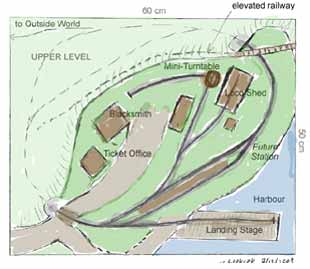 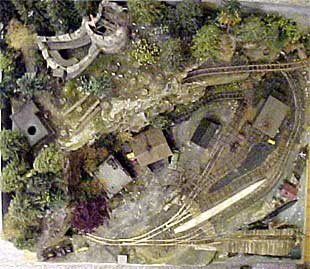 When you get into scales larger than HO, you’re talking about some real ingenuity required to produce a working railway in a very small space (under, say, 8 feet in length). But it can be done — the Micro Layout Design Gallery on this site includes a number of clever small layouts in O scale (1:48) and even G scale (1:22.5) and 7/8″ scale (1:13.7)! And there are more on the way.

One good strategy is to use extra narrow gauge trains, whose prototypes are small and which use very tight radii. Here’s an example by Palle K. Steffensen, from Svendborg, Denmark. Palle likes to “doodle” … i.e., to sketch small layouts rather than draw them up to exact scale. He’s also a member of his local G scale club, LGB Gruppen Svendborg. 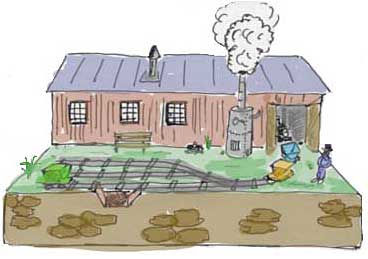 Palle has doodled this small layout to use as a module with the club’s large, G-scale layout. Palle describes it like this: “This micro-layout is designed for top mounting on the club’s modular LGB layout, with a 15″ gauge train dumping ore into the LGB cars. It’s basicly an Inglenook switching layout with one leg curving into a factory which also serves as a hidden fiddle yard. That is why I gave it the name Inglebend Works. The Gn15 layout size is 90 x 35 cm (36 x 13 in).”

(Note: I have added color to Palle’s original pencil sketch.)

Gn15 scale uses HO-gauge track width (16.5mm) to represent a prototype gauge of 15 inches (381 mm), used for industrial, mining, and small estate railways. Several commercial locomotives and a selection of rolling stock are available in this scale, which even has a dedicated website.