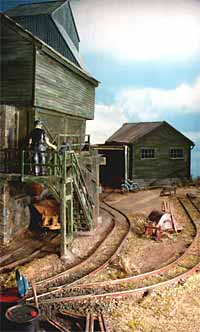 Steve Waterfield, from Staines, England, started working on Petroc Quarries in a Japanese hotel room about 10 years ago. The 20×24 in (50×61 cm) layout has been taking on a personality of its own ever since. Modeling scale is O14 (On2 at 7mm to the foot). English enthusiasts may have seen it in Railway Modeler magazine, and it’s done a fair number of train shows, usually with its big brother Tidmeric Minerals.

The basis of the operation is that the company reprocesses old mining ore waste tips and hopes to make a living with investment in a new mill. The original ore bins are no longer used, but the railway keeps going until a conveyor is installed. Therefore it hauls empties one way and loads the other, with a siding for works cars and such.

Steve comments, “Track is hand laid, and structures are foam board overlaid with embossed plastic sheet, real wood and ‘Milliput’ epoxy filler. A lot of use has been made of photo flats — one picture shows a large green compressed air receiver under the new mill building. This is a photo flat on 3mm foam board, but all the pipes are 3D.

“At the back the continuous run passes over a turntable which is used to switch stock onto storage roads. This is a simple disc of PCB material held firmly and rotated by hand. The turnouts used to have slow motion motors, but I simplified things and put in a lever frame with wire-in-tube control, much more satisfying. A small 3×2 in control panel complete with mimic diagram holds three section switches and sprung pushbuttons for the stub storage roads. A boat diesel sound system under the board provides a bit of noise, until I get fed up with it or get a headache, whichever comes first.” 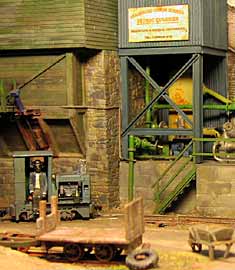 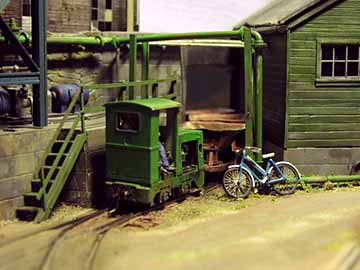 A SWISS ADAPTATION OF BOX STREET

Daniel Schläfli, who lives in Switzerland, is building a variation on Jack Trollope’s Box Street Yard plan, called 47th Street Yard. The plan features a few different twists including using a traverser (transfer table) rather than a sector plate fiddle yard. The On30 (O16.5) layout is at the track-laying stage, shown below, and measures 48×20 in (120×50 cm). Daniel has promised more work-in-progress photos as he proceeds. For now, we can have a look at his nicely kitbashed diesel motive power, below right. 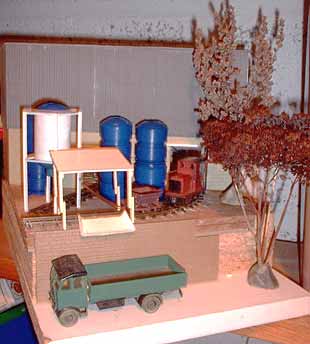 Chris O’Donoghue, whose Quadrant Works 1721 was displayed in last month’s Scrapbook, has sent an update photo. His report:

“During the holidays, while sitting in front of the TV when some interminable film or repeat was being shown, I managed to knock up the main building. Also, after festivities on Christmas day, I acquired some more party poppers which, once stripped down, make suitable silos. They still require framing, walkways and ladders to be added, plus lots of pipework. In addition, I’ve built up the base with pieces of chipboard and increased the size slightly so it’s now called Quadrant Works 1926. The extra 5 cm makes the road a bit wider so I can add some detail around the lorry.”

Paul Boehlert, from Atlanta, Georgia, sent some snapshots of the DeKalb Industrial Railroad, a 1×6 ft shelf switcher he’s building in his studio at work. It’s strictly Modern Image, and features extensive shunting operations. Paul also designed the somewhat shorter Mohawk & Adirondack layout in the Micro Layout Design Gallery. You can probably deduce the DeKalb track plan from the photo below.

Victor Smith, who lives in Pasadena, California, is building a hybrid-design micro layout in G scale — it’s a cross between Carl’s Exports (G- 1×4 ft) and Cycles le Berlan (OO9, 5×13 in). And it includes both a sector plate and a traverser (transfer table). Coming in at 573 square inches in area, it’s called Borracho Brewery (the name is subject to change later).

The scenery Victor has planned is shown in his drawing above. It and the backdrop will all be removable for storage. Tune in later to see the progress photos that Victor has promised! 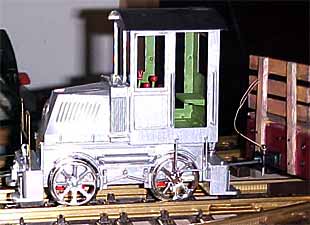 You may be puzzled, as I was, that Victor has limited the length of both his sector plate and his traverser to 12 inches. For G scale on #1 gauge, I usually allow 16″-18″ for a four-wheeled loco and one car. Victor explained by sending along a photo (right) of the “critter” he’s built for this layout — it’s one of the smallest believable G-scale locos I’ve seen, only about 5 inches long! Victor kitbashed it from an MDC Speeder mech, a Hartland Mack hood, and an MDC Big Hustler cab. It easily fits, along with a four-wheeled bulkhead flat car, within the 12-inch length of Victor’s lead tracks. Caramba!