FROM THE LAND OF THE VIKINGS COMES…

THE LEGEND: We’ve learnt that the old Vikings were great explorers and craftsmen. Less known is the fact that they even explored steam railroading! The Edda tells that in Valhalla, where the dead heroes went, they had this hog, Sæhrímnir, who gave nourishment to the heroes there. Every day the hog was slain and the pork boiled, but by each evening the hog was back on its feet and alive.

I imagined that the Vikings got bored with carrying the pork to the kitchen every day, so they built a railway to do the labor. That’s the story behind the Valhalla Hog Express. It’s a simple loop of track with no turnouts (lest I’m forced to honor others than the Norsemen!).

THE PLAN: This plan started with me looking at the plan for the micro Darjeeling-Himalayan Railway. I liked the layout but a couple of things bothered me. The helix was intriguing, but the thought of such a long stretch of track hidden under the scenery didn’t suit me. And besides (although the Himalayas have an appeal) the area is a bit far from what I like to model!

As with DHR, this layout is planned for OO9/HOn30. The main focal centre is the Gildeskål (or Feast Hall), placed at the bottom of a nearby hill where the hog resides. When pork supply runs dry the train is fired up and runs to the hilltop where the hog is killed, and then the train returns to the Gildeskål with new supplies. 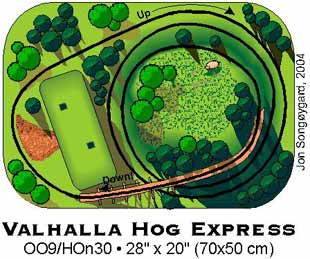 As running the train is such a simple task, I’d propose using lots of sound effects and some animation — sounds of the pig, standing on the hilltop; a Viking feast in the Gildeskål – and then silence, when all the pork is consumed. Then the train chugs away through the Norwegian woods, with singing birds, bears, a moose and some viking peasants passing by.

At the hilltop, a Viking Hog-slayer should pop up at the sounds of a screaming pig, then disappear again while the hog is being turned to appear lying on the ground (or perhaps simply disappear – it’s destined for the train, anyway). Then the train speeds down the steep ramp to the Gildeskål, with sounds of jolly Vikings!

(That downgrade is pretty hazardous and could have been used only by fearless people – or complete fools! But of course, both these are good descriptions of the Vikings in this area. Yet another possibility is that this railroad was the real reason why the Vikings disappeared from history…)

I have no safe documentation on what kind of rolling stock the old Vikings used. As you can see on the picture at the top of the page (“Viking Steam”), both the motorized tram and the tracks could be unusual — not exactly off-the-shelf stuff. But as the whole setting is fictional, I guess any kind of steam equipment could be appropriate. Märklin has actually made some equipment that could be of interest.

The Gildeskål should be a low, long building (sometimes they were half buried in the ground and the roof covered with earth). In the neighborhood one could model other, smaller Viking huts, mostly workshops and storage buildings. People and animals usually lived together in large buildings like the Feast Hall during the winter.

I realize that this is a layout for the “brave-hearted”. A pure fictional prototype; rolling stock should preferably be built from scratch, ditto concerning buildings, and there are really no other train movements than the loop up and back down again.

But on the other hand you get the opportunity to model Real Viking Lifestyle, to add both sound effects and animation, and to build a layout that hopefully will trigger a good couple of laughs!

UPDATE: TOPPING OFF THE KEG OF COORS

From “Shortliner Jack” Trollope, up in the Highlands of Scotland, come a pair of suggestions to expand Mike McLaughlin’s amazing Keg of Coors layout using HO scale. Jack’s first effort (above) adds a fiddle yard traverser at the left of the original layout plan — and includes a turnout on the traverser to reach a hidden siding behind the brewery facade. This arrangement eliminates the need for “hand-switching” offstage to make up a two-car train for the brewery.

As an afterthought, Jack noted that a two car train might not clear the turnout on the original drawing, so he suggested (a) extend the traverser another six inches or so; or (b) try Version 1.1, which includes a highly-unusual sector plate on the traverser to enable a two car train to leave the hidden siding for the traverser and move directly to the brewery with no additional shunting. Phew! Feeling brave?

Note that in both plans, the second track on the traverser is not functional … it’s just there as a safety device to prevent stock from rolling into the traverser pit! (“Belt and braces [suspenders]” Jack would say. 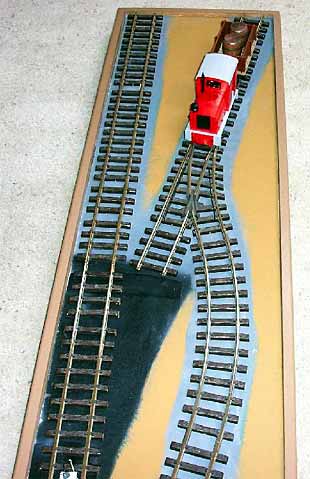 Bill Nunn, from Tucson, Arizona, is building a “stock” version of Carl’s Exports — a G-scale micro layout. Shown here is the completed trackwork — scenery is still to come.

The layout measures 48×15 inches (120×38 cm). Trackwork is standard LGB, and the loco is an LGB “field diesel”. The car is a standard Hartland Loco Works unit with extra detailing added.

Bill reports a modeling tip he discovered to make the sector plate easier to use: “Since LGB track is so rigid, I just put thin plastic plates under the ends. The track is actually suspended over the layout surface. This reduces drag due to weight quite a bit, which in full G scale can be significant.” 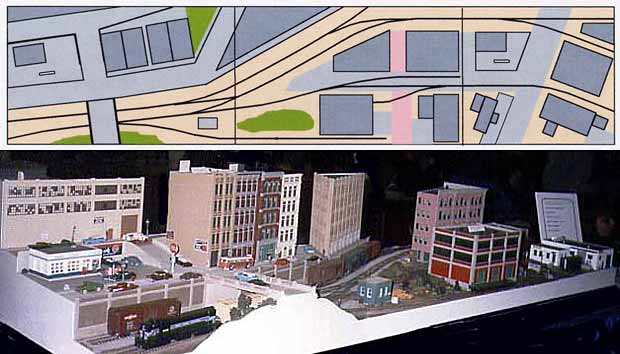 This portable switching layout has traveled enough miles to reach across the U.S. nearly 10 times! It was built almost 10 years ago by Jim Sacco, who lives in Pittsburgh, Pennsylvania, and is the proprieter of City Classics building kits. Nearly all the structures on the layout were built by Jim from his kits.

The HO layout is built in three sections, and measures 8’x2′ (244×60 cm). It fits (barely) into Jim’s car for travelling to train shows around the country. The track plan is basically a runaround siding with spurs and a branch line leading from it. I think the multi-level scenery gives a nice urban”feel” to the design. (Sharp eyed readers will notice that the photo actually shows only two of the three sections, which can be used independently for space-limited situations,)

Jim’s currently building a new exhibition layout — with luck, it will be making the rounds with him in the not-too-distant future. 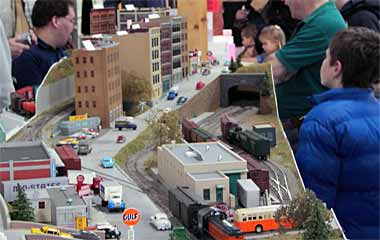 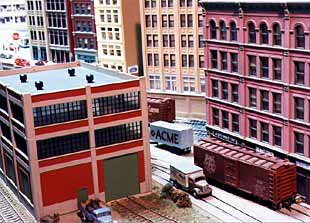