This month we add three more layouts to our collection of pikes designed to fit into corners (see August 2004 Scrapbook for more). Plus, there are several bonus micro layouts, any of which may get you out of the armchair and over to the workbench!

A CORNER LAYOUT FOR TWO OPERATORS

Chris Gilbert, who lives in England’s West Midlands, was faced with the challenge of designing a new railway for his twin sons, Thomas Christopher and Jack William (aged 7 and a half). Inspiration struck while he was browsing through last month’s Scrapbook!

“I was rather taken by Jeff Hartmann’s corner layout,” Chris reports. “I’d been looking for a layout plan to replace the boys’ roundy-roundy 6’by 4′ layout for awhile now, as it seems to suck all the light and space out of their room when it is lowered into place.

“They want a layout that they can both operate together. The idea was to have a small 6′ by 1′ that was hinged so it could be locked up out of the way when not in use. As they are now both into switching I was thinking of using the Timesaver plan. Then I saw Jeff’s Inglenook plan and came up with the idea of combining them, allowing them to sit either side.”

The result is this happy combination of an Inglenook switching game on one leg and a Timesaver-style puzzle on the other. The crossing (top right) can also be a double-slip switch, allowing interchange between the two halves.

A ‘GOLDEN OLDIE’ CORNER PLAN FROM THE ‘SIXTIES

Sayerville has long been a favorite plan of mine and of several modeling friends. It was first published during the 1960’s and has been reprinted in several Kalmbach books of layout collections. I’ve shrunk the plan somewhat and have adopted the more complex trackwork that Ray Klatt only suggested in his original drawing.

The result is an Inglenook switching puzzle in the upper leg and a fairly complex knot of terminal trackage in the right-hand section. Klatt’s original design had a considerably simpler termnal leg, and you may want to look it up if you don’t care for complicated tracks.

If you’re looking for a layout plan to fit atop a corner bookcase unit, Sayerville would be hard to beat! 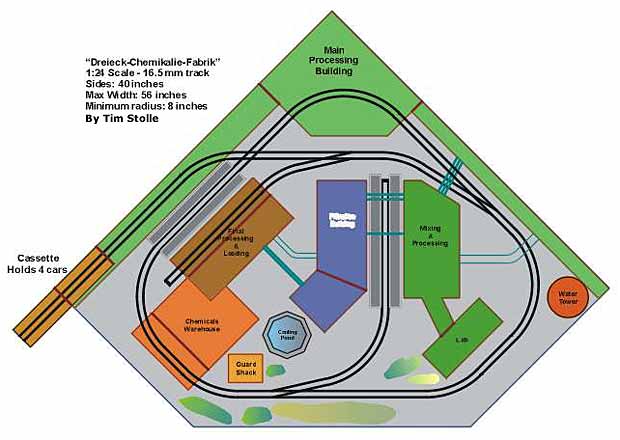 Tim says, “My name for the layout is Dreieck-Chemikalie-Fabrik (“Triangle Chemical Factory” in English) since it’s a corner plan. Size: 40 inch sides by 56 or so inches max width. My intention is to use Peco flex track and turnouts so I wanted to have enough room to use this system without crowding stuff too much and allow for reasonable curve radii. The whole layout will be paved with asphalt and brick work, similar to scenes in the Merck factory site.”

Rolling stock consists primarily of small four-wheel flat cars and gondolas that haul a wide variety of chemicals and supplies around the huge plant. Cars enter and leave the plant via the removable cassette along the wall at the left, hidden inside the building along that wall.

Scenically, reports Tim, “in my mind’s eye, I envision a layout where streets become viewpoints…sometimes a building will block part of the view of the rail network but it leads the eye to the desired scene. On the 40 inch sides I plan to use flats that lead to a large building in the back corner. The rails pass through the large building and continue around to another street with flats. There is one spur that goes up a street and terminates at the end of it. Paved loading areas, both open and roofed over, abound in this factory.”

Some dramatic vistas and lots of switching operations are to be found in this chemical works! Needless to say, it can be located in virtually any country you choose.

HOW FRENCH CAN YOU GET? A METRIQUE RAILWAY AND A WINERY!

Giles Barnabe, who lives in London and part-time in France, has an affinity for French railways. He designed this metre-gauge line as a “might have been”. St. Yzans-de-Médoc is situated on the west bank of the Gironde estuary a little to the north of Bordeaux in southwestern France — just about where the Port de Lamarque actually exists.

The layout is set in the period 1890-1910 and uses four-wheel coaches pushed or pulled by small tank engines. The winery is served by wagons with giant wooden barrels, while timber is dealt with on the wharf; other freight goes to the goods shed. The fuel dealer would probably sell firewood and lampoil — few people burn coal as it’s too expensive.

The loco shed is based on one that Giles found in Spain. It has three stone walls with the fourth side open, the roof supported on a girder giving plenty of room for the tracks to enter on a splayed angle. It’s a rectangular building serving as a semi-roundhouse. An extra switching loco is based there, to overcome the lack of a runaround track at this terminal.

Strictly speaking, for a metre-gauge layout you should use 12mm gauge — Giles recommends using Bemo 12mm wheelsets (available as spare parts) under old Egger, Jouef, or Liliput HOe (HOn30) wagons and coaches. Locos can be converted or rebodied from Tillig 0-8-0 tank engines with the rear set of wheels removed — they work fine like this.

“Alternatively,” suggests Giles, “you could set the layout on a German island in the North Sea or Baltic and use Tillig HOm stock as purchased. Or take the easy route and do it all in HOe.” I think I’d make mine on 9mm (N gauge) track. Much easier! 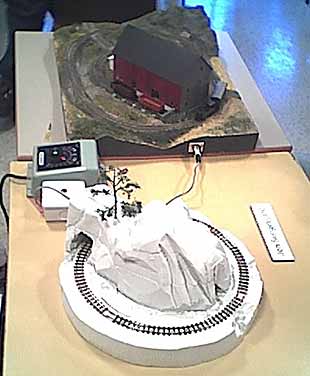 Last spring, Jon Songøygard, from Arendal, Norway, exhibited two of his micros-in-progress at “Vårslepp 2004” (“Spring Release 2004”). These were among the first micros publicly displayed in Norway, and they received a lot of notice. Jon reports, however, that the narrow-gauge trains gathered even more attention!

Jon has displayed both these layouts in previous issues of the Scrapbook. Ubergsmoen Industries (top) is in the August 2003 edition, while the mountain pizza layout was shown in March 2004. For more information about Jon’s modeling, see his new website.

Symon Haynes, from Devizes, Wiltshire in England, has squeezed the Wantage Upper Yard trackage (shown in Giles Barnabe’s Wantage Upper Yard layout) into a remarkably small area … the size of an A4 sheet of letter paper. Symon proposes to cut the sheet in half and rejoin the two halves end to end, producing a 2xA5 baseboard measuring just 420×148 mm. And this is standard gauge OO/HO!

Rolling stock would consist of short British four-wheel wagons and a single four-wheel converted horsecar for passengers. Locos would be any of the tiny Wantage 0-4-0s — #7 would be ideal! Operation consists of shunting freight from the “rest of the world” hidden siding to the gasworks, reached (as in real life) by running through the online loco shed. Passengers are released at the platform under the shelter.

The main engine shed and brick wall are painted on the backdrop behind the passenger shelter. Overhead gas pipes partially conceal the sector plate, which holds a loco and one car. This little scene is actually a reasonably accurate depiction of a very small portion of the cramped Wantage Upper Yard … and operations are very close to the prototype, including the problems of the very short lead track for the gasworks kickback siding! Capstan shunting, anyone?