Model railroaders are very imaginative people. And they build layouts in
many unexpected places. This month, we present a collection of
small layouts built in a wide variety of containers. Perhaps one of
them will give you an idea for a new layout!

ALL THIS FOLDS UP INTO A CARRY-ON AIRLINE CASE! 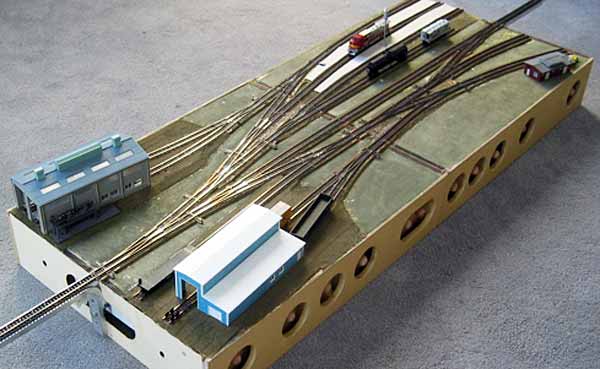 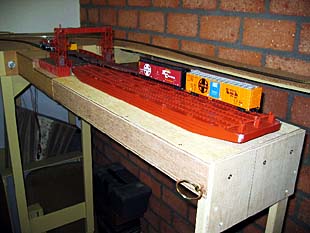 Bart Bakker, from Utrecht in The Netherlands, is a master of the portable layout carrying case. Here he is (right) in Amsterdam’s Schiphol Airport, showing off his latest creation, Watkins — an N-scale layout that travels in its own carrying case and fits into the overhead luggage rack on an airliner.

The layout is a fully functional FREMO-americaN module which Bart can take to FREMO-meets around Europe. The track plan includes 13 turnouts, controlled by 11 rods — you can see the buttons at the ends of the rods in the recessed circles along the sides of the layout base.

Included in the plan, besides a through main line, are extensive service, maintenance, and repair facilities for both diesel locomotives and railroad cars of all types. Facilities will be similar to those shown in Small Layout Scrapbook for October 2004. Most of these scenery items are still under construction. 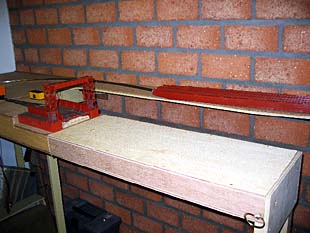 The two halves of the layout base fit together for travel. One half (at left) contains a camera and the buildings, along with the rolling stock and electrical gear in a painter’s box. The other half holds an overnight pack (remember, this is Bart’s carry-on luggage!) and two aluminum brackets for the “offstage” main line extensions.

Scale is N, track is from Micro Engineering, turnouts are Atlas code 55.

NOW FOR A MUSICAL INTERLUDE…

Reader Sven Wesenberg, in Munich Germany, sent me this 20-year-old newspaper clipping showing an early N-scale layout built into a violin case. Little is known about the layout, except it was built by Jörg Orzschia and was a stellar attraction at the Leipzig Model Railway Exhibition in the late 1970’s or early 1980’s.

Building layouts in instrument cases is a long-standing tradition in model railroading. I can remember seeing photos of an English layout in the 1920’s, built in two mandolin cases. Another one, in the Fifties, was called the Moonlight & Violins RR.

Below is a more up-to-date rendition in a guitar case by Bobber Gibbs, from Wasaga Beach Ontario Canada. It’s called A Case for On30 (photo by Bobber Gibbs). “In 2003, I created a quick ‘show and tell’ On30 display with handlaid Code 100 rail and a Peco 3-way turnout for a local Narrow Gauge Madness meet,” Bobber explains.

“For an Inglenook [switching game], a three-way turnout provides maximum operation in minimum space. For transport, it and all the rolling stock are protected inside the guitar case. At home, my beloved Yamaha 12-string takes its place.” Bobber is the owner and moderator of the On30 Conspiracy.

CONTINUING WITH THE GOOD THINGS IN LIFE… 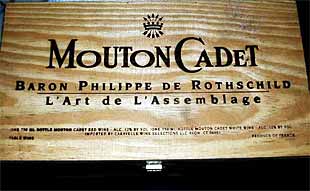 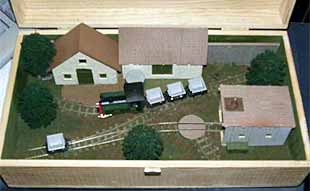 Jim Favre, who lives in Dalton Massachusetts USA, built this tiny vineyard railway in a wine box to show off part of his collection of vintage Egger-Bahn, Jouet and Roco HOn30 trains. “It is still not finished and not exactly a shoe box,” comments Jim, ” but at 12.75in long X 6.75in wide X 3.625in deep it is shoe box sized.

“I managed to get an Inglenook sort of track plan with an added turntable and an extra storage track. I found a nice hillside vineyard photo in correct perspective for the scene that I will glue inside the lid to form a backdrop and add a bit of greenery along the bottom to create a tree line behind the structures.” Delicious!

AND SPEAKING OF SHOEBOX LAYOUTS … 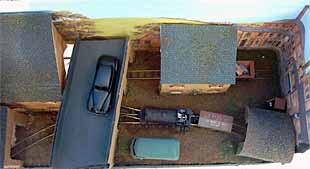 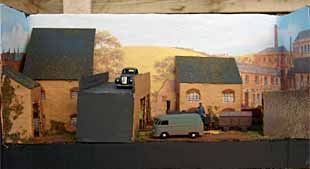 Here’s a shoebox layout built on the classic Carl’s Imports plan by Andrew L. Smith, from Chelmsford Essex England. Steephill Shoebox is 009 scale (4mm to the foot on 9mm gauge), and is being superdetailed by Andrew. His comment: “I forgot to add that the privy (outside toilet) does have a 4mm toilet roll attached to the door and is just visible on the overhead photo.” What next? 4mm scale latches and padlocks?

FOR A SOMEWHAT LARGER FRUIT BOX …

From Keith Addenbrooke, in Coventry England, comes this idea: “In the UK fruit and vegetables are often still delivered to grocery stores in open topped cardboard boxes with strengthened ends and corners (for stacking). Dimensions are about 60x40x14 cm).

“May I suggest these boxes as ideal for micro layouts? I got the idea after helping the kids make table soccer games in them as their Easter holiday project.”

To prove the point Keith designed St. Thomas’ Siding, “Many popular published plans feature a large building to give a theme, but I don’t remember seeing a church as one. As I have no room for a Hornby Church kit on any of the other plans I’ve designed, I’ve used it here. I would disguise the tracks that disappear through the backscene with large churchyard trees.

“The front of the box is cut out and taken backwards to form a conventional scenic divide to disguise the continuous run — a true ‘no cost baseboard’. Traffic during the week will include inbound supplies of communion wine, bread or wafers and candles, hymn books and occasional heavy traffic for building or bell tower repairs, while flowers will be a regular perishable commodity for unloading. Outbound traffic will be church newsletters (Parish Magazines) and supplies collected by parishoners for missionary work.

“Passenger traffic will be light during the week — the choir for practice, the cleaner and flower arranger — but on Sundays specials will be required. Highlight of the year could be the church fete — the layout could appear at a real church fete to promote the hobby!”

A very original idea for a layout! The name, by the way, does not refer to the famed Thomas the Tank Engine, but rather to St. Thomas, the Apostle who doubted — because Keith doubts that he’ll ever actually build it! Any volunteers?

AN INGENIOUS USE OF A BOX FILE 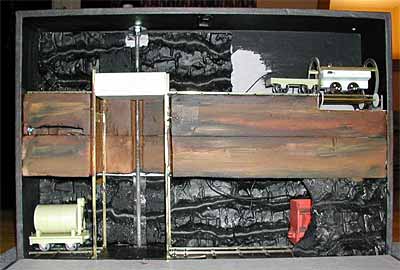 Picture this tiny layout hanging on your wall — it’s a cutaway view of a coal mine, built in a box file (a heavy pressed board box used in Europe to store letters and other documents). This clever layout is being built in Gn15 scale by Klaus Komischke from Köln (Cologne) Germany.

Klaus is modeling two levels of the mine. The lower level, where the coal is dug out, is served by a Sidelines “Wasp” IC loco. The upper level will have its own loco, a battery unit Klaus is building.

In the featured operation the Wasp on the lower level pulls a loaded tub from the tunnel (at right) into the lift (elevator), then pulls into the track to the left of the lift. The tub is raised to the upper level, where the battery loco pushes it into the tippler, uncouples and pulls back. The tub is tipped and returned to its upright position. The loco pulls it to the lift, which descends to the lower level where the Wasp pushes it back into the tunnel to be reloaded (the hidden loader mechanism is still under construction).

The lift/elevator is operated by a hand crank that turns a threaded vertical rod to raise and lower the cage. The tippler has gone through two complete design processes — originally a rotating tippler (lower left), it was later redesigned to be a more-reliable end tippler (lower right).

You can find out much more about Klaus’s unique layout at the Gn15.Info site’s GnATTERbox forum. 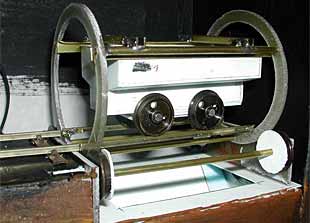 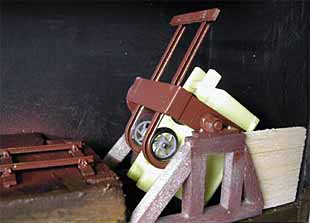 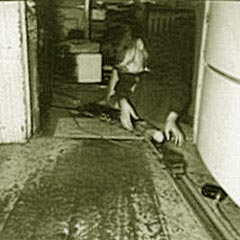 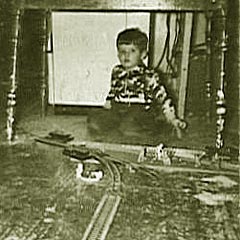 Charles Hansen, from Boston USA, is building this On30 railroad in an aluminum attaché case measuring 17.5×12.5×5 inches (45x31x13 cm). One of his design goals was to disguise the circular track plan as much as possible — notice how the building roof lines tend to lead the eye away from connecting the track segments.

A major design constraint was the Magic Trains diesel, which caused tunnel and door openings to be much larger than would be needed for just the Porter and typical On30 critters.

Charles comments, “The track is Peco, although it required a lot of modification including filing of the rail sides, to get the diesel to run. The ‘main line’ radius is about 4 inches (101mm), while the enginehouse lead and the industry tracks are closer to 3 inches (76mm). The turnouts are Peco Setrack with every other tie removed.”

The factory has a Seuthe smoke unit in the far corner and a welding circuit inside, and Charles plans other scenic goodies for this road. In the left-hand photo above, you can just see the straps at each side that are used to raise and lower the layout into the case. (Left-hand photo taken at Taunton Massachusetts Two-Footer Show by David Fugere.)

AND IN ANOTHER CASE … 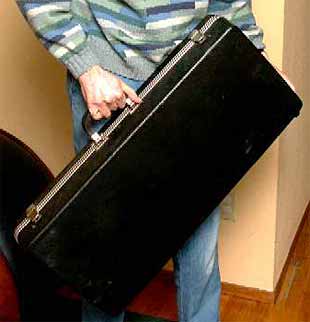 It would be easy to design a simple Z-scale layout in a space this size, but Jonathan accepted the challenge of planning a complex layout in this space. He found a way to squeeze in an intricate skein of trackwork, on several levels, and even providing a delightful “rabbit warren” effect of trains entering tunnels and coming out not at all where you expect to see them!

Describing the track plan (below left) Jonathan comments, “Topologically, the layout is a loop with a delta [wye] that leads to a single line at the end of which is a reversing loop enclosing a single siding. The reversing loop is elevated. The track in light green runs over a viaduct. Track shown as outline is inside a tunnel.

“There is one LH straight and 4 curved points (switches), all optionally powered from a console (shown in dark blue) concealed behind a fall of greenery behind a station.” [Got all that?]

Below, young Edwin Scott shows off the layout just before its installation in the case. You may be able to make out the “fall of ivy” behind Vuitton Station on the front. This flap conceals the solenoid control panel.

For many more photographs and lots more information about this and other modeling projects from Jonathan’s fertile mind, click here. 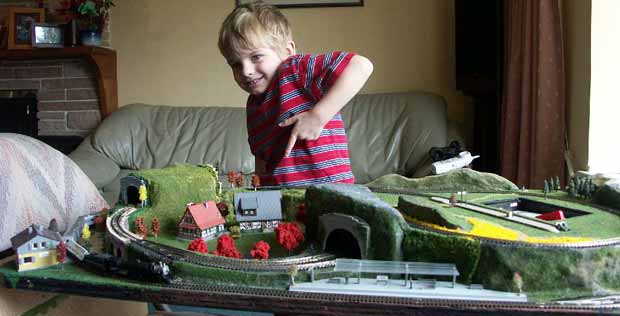