MIS’-CEL-LA-NY — n. 1: a mixture of various things.
Many items arrive in my e-mail. not all of which fit into the categories
I devise for the monthly issues of Small Layout Scrapbook. Here then
are some noteworthy contributions I’ve received recently that all
stand on their own. A true miscellany! Be prepared, however, to do some
linking back and forth … many of them fit with other items on this site.
And somewhere there may be a good idea you can use!

AN O-SCALE, DUAL-GAUGED TREAT FROM CANADA 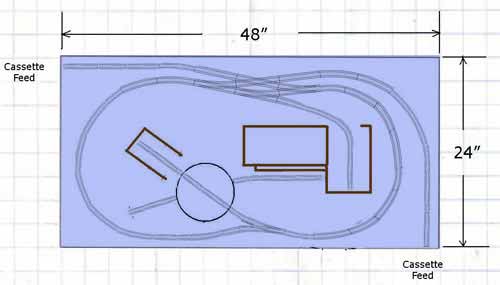 In Scrapbook #24, Brian Wilson, from Sidney BC, Canada, showed us Tsehum Harbour, an unusually shaped On30 and On18 layout (16.5 and 9 mm gauges). At the lower right edge of his plan is an intriguing feature — a dual-gauged crossing where the slim gauge crosses the even slimmer gauge.

Brian has now roughed in that part of his pike, and sent this photograph of the area , which is an interchange between the two gauges. Nice modeling, eh? For more, see Brian’s website. 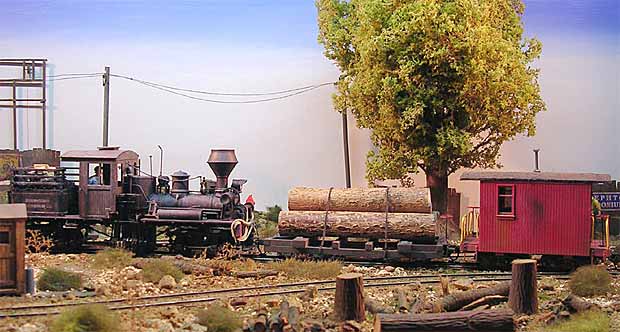 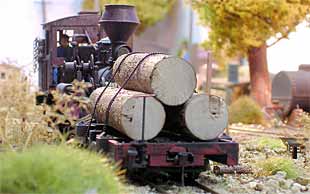 In that same issue #24 of the Scrapbook is a visit to Fabrice Fayolle‘s fabulous farrago, the Josephtown Craddonium Co. Fabrice, who lives in Amiens, France, has contributed two final photos from his exhibition layout… both showing off his On30 shay and impressively modeled log car. For more, see his website. 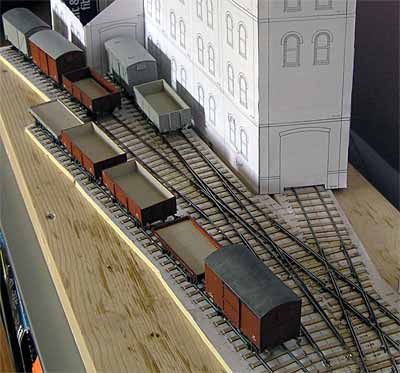 Another update, from Scrapbook #33, shows progress made by Tony Maude, Pastor of the Peebles Baptist Church, Scotland. His P4 layout, Candy Mill, uses prototype-scaled rails, flangeways, and wheels as well as exact 18.83 mm gauge, Tony has now roughed out the buildings using card stand-ins, and shows his growing roster of wagons and vans. Note the great-looking trackwork! 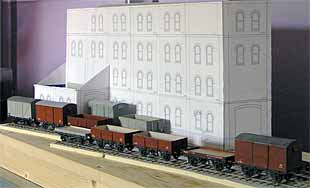 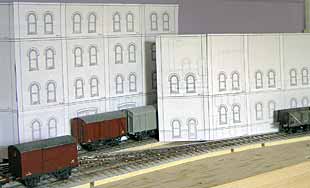 A CAMERA TOUR OF A CALIFORNIA TRAIN SHOW

Jeff Hartmann, who lives in Long Beach California USA, took his camera to the self-styled “World’s Greatest Hobby Show” held in Long Beach in February 2005. He found some fascinating small layouts, most of them embedded in much larger modular layouts. Here’s his photographic report. [All photography by Jeffrey Hartmann.] 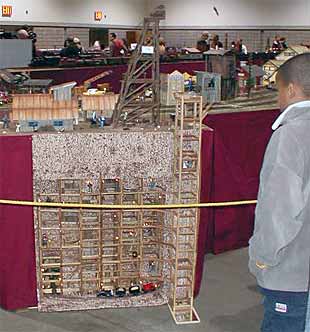 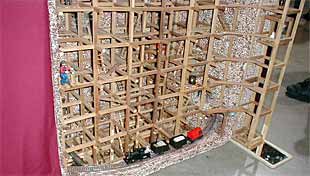 “This is on the G scale modular layout of the Del Oro Pacific club. It’s a vertical mining layout, similar to Amalgamated Mine #258. The module attaches to the front of a standard corner module. The layout features a mine with a working elevator and a Gn15 mining tram. The elevator runs slowly up and down the mine shaft and the train runs on a loop of track at the lowest level. The module was built by Roy Hughen.” 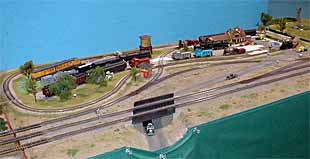 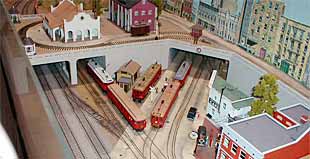 (Above left) “The concept of this N-Trak module is pretty neat — it’s a railroad museum built on a standard 2×4 ft NTrak module. The radius of the curves here is pretty tight — about 4 in. The train running around the loop is powered by an 0-6-0 tank locomotive pulling a short passenger car and a open gondola of museum visitors. The track running diagonally and crossing the museum line connects the loop and the station tracks to the main line. This allows the museum to take its trains off the museum grounds for a longer trip. The layout was built by Ed Jones of the Antelope Valley N Scalers.”

(Above right) “Here is another micro in a module, an HO trolley layout on a 6 ft long by 30 in wide module. The track loops around a station on the top level, then runs through the street to the lower level. On the lower level the track runs through a business district and loops back under the upper level. Note the dual gauge track; both the standard gauge Pacific Electric “Red Cars” and the 42-in gauge Los Angeles Railway “Yellow Cars” will run on this layout. The module is part of the 20s & 30s Modular Railroad club and was built by David McCanne.“ 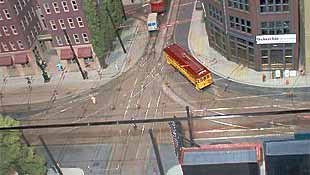 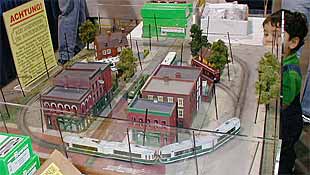 (Above left) “This is part of the Southern California Traction Club HO layout. There is a complete loop of track around the Hotel St. George building. This loop is independent of the double track main line. The Grand Union (3/5 complete) is an impressive centerpiece. The club’s website has some additional photos of this model.”

(Above right) “This module/micro layout was built by Southern California Traction Club member George Huckaby. While the module would fit into the club’s layout, Mr. Huckaby displayed it at his booth along with the trolley railroad decals that he produces. The layout has the main line running across the middle and a loop running around the perimeter. A pair of tracks join the main line to the loop to create a reversing loop. The layout can be used on the end of a line of modules to turn the trolleys around, in the middle of the layout with the trains running across it or on its own with the streetcars running on the loop. Quite a versatile little layout in only 3×3 feet.“

A CONCEPTUAL COLLAGE FROM CHRIS 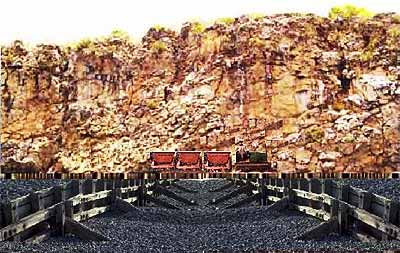 Chris O’Donoghue, a frequent contributor to the Scrapbook and member of the Greenwich & District Narrow Gauge Railway Society in England, sent in this dramatic collage as a concept for a layout. Chris’s comments: “Inspired by the Pett Level Tramway, the Cliff End Railway is really only a simple 16.5mm gauge oval test track which will give me a chance to run my 10hp Planet loco [shown in photo].

“The Tramway was laid by the quaintly named Rother & Jury’s Gut Catchment Board (gut = outflow) to assist the building of new sea defences at Winchelsea Beach in East Sussex, U.K. It was a two foot gauge line built along the foreshore and ran for about five miles to link up with a gravel pit line. After reclamation work in 1946 the tramway was more or less abandoned although I understand that there was still track in place in the early 1950s. 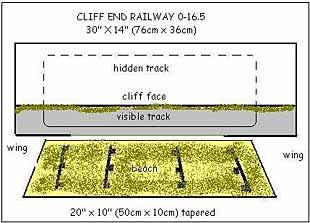 “Cliff End Railway, although simple in plan, has pretensions to be grand in execution. The cliff face could be anything from 50 feet to 100 feet high (a scale 350mm – 700mm). As tunnels through the cliff face would be most improbable, theatrical ‘wings’ will be used to hide the exits with a proscenium arch and hidden lighting. To extend the depth a beach panel, trapezoid in shape to create false perspective, will be built in front with plenty of scope for detailing. Battered timber groynes, rock pools, the ribs of a rotting hulk, seabirds and plenty of sand and gravel will provide a visual feast.

“To add some operational interest, a simple mechanism could be built so that skips could discharge their loads on to the beach below, thereby justifying such a preposterous idea!” All in all, a grand excuse for building some spectacular scenery!

Speaking of seaside railroads, Pete Strutz, from Edgerton Wisconsin USA, sent this picture of his On30 pier railroad modeled after the Walmington Pier Tramway line from our Micro Layout Design Gallery. It’s modeled on a 10-foot pine board and uses a Bachmann trolley that can be programmed to proceed along the track, pause at the end, then return to the shed. 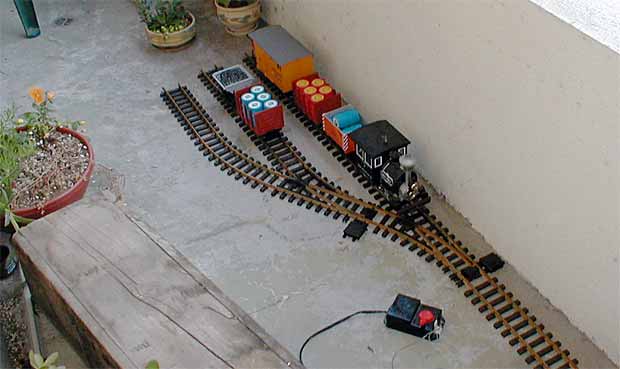 Jeff Hartmann, from Long Beach California USA, liked the look of the Ginglenook small-space G-scale layout in Scrapbook #38, so he built one using sectional G track. Jeff wrote, “I had long been disappointed that the balcony of my condo wasn’t wide enough for a loop of G scale track. Your ‘Ginglenook’ layout was just thing to put together and spend a pleasant afternoon of outdoor railroading.” Great idea! To explore Jeff’s other model railroad activities, see his website. 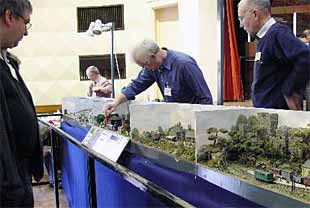 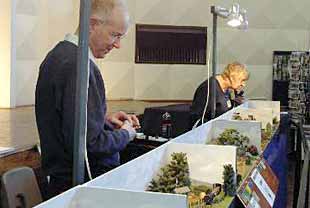 Due to lack of space, British club modelers often are unable to assemble and operate their modular layouts except at exhibitions. The Norfolk (UK) Area Group of the 009 Society is no exception … they currently have five operating modules of their OO9 (HOn30) railway, Castleby, and these photos show them all on display at the Biggleswade Show in February.  Needless to say, the club were delighted that everything worked together properly! [Photographs by Emrys Hopkins] 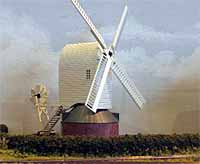 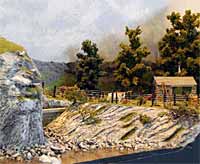 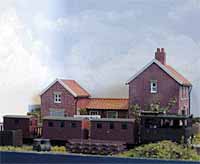