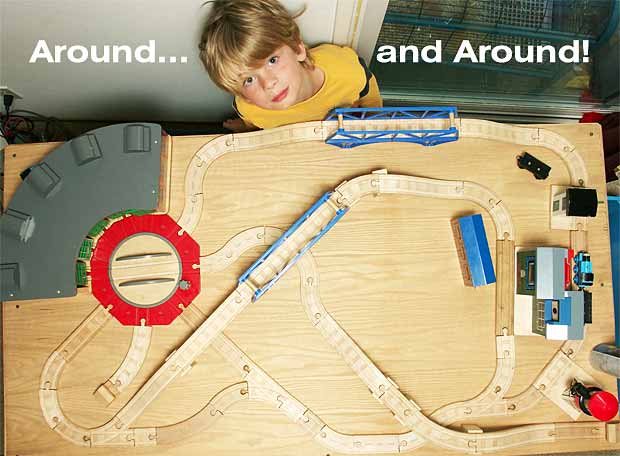 Though we often publish layouts designed for complex switching maneuvers, many people prefer continuous-run layouts where they can just “let ’em run” and indulge in some plain train watching. This starts at an early age, with holiday trains running around a tree (remember?). It extends into childhood, as illustrated here by young Edwin Scott, from Santa Rosa, California, who
designed and built this round-and-round Brio layout for his Thomas the Tank Engine loco. The habit can persist perhaps for a lifetime, as shown by the continuous layouts presented below, each with some potential switching activity but with the main emphasis on having a lot of fun watching trains.
Happy Holidays, Everyone!

LET’S START AT THE BRICKWORKS 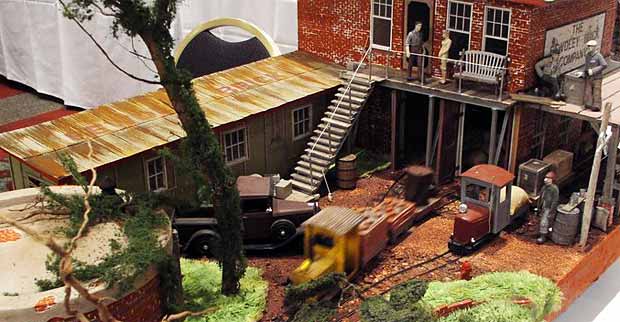 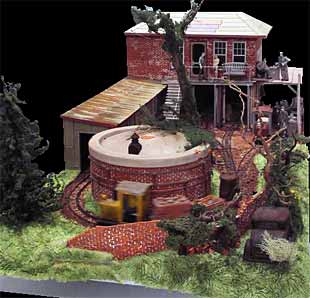 A small industrial tram serving a brickworks is the theme of Christopher Creighton‘s new Gn15 layout, The Bewdley Brick Company Tram. The layout measures 49x22in (101x56cm). Christopher lives in Schomberg, Ontario Canada, and he’s the proprieter of Schomberg Scale Models, many of whose products are showcased in the layout.

Notice that the “oval” look is avoided by careful choice of structures and by hiding much of the trackage. There’s some built-in capability for switching, but the emphasis here is on running a series of delightful little tram locos through the buildings, around the kiln, and past the audience who can enjoy watching the trains in action.

(Photos by Emrys Hopkins, except as noted.) 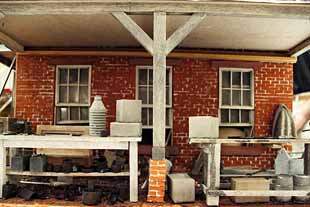 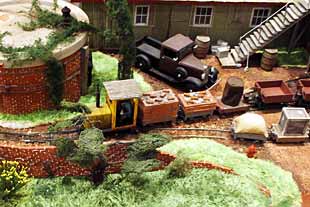 (Photos below by Christopher Creighton) 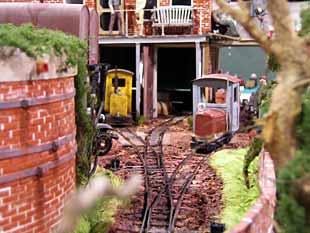 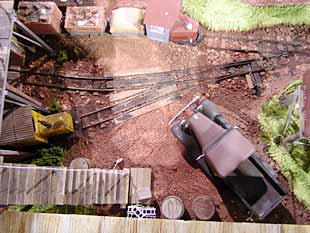 AROUND AND AROUND — TWICE

At the other end of the scale size spectrum is Bryn Dibyn, a 30x20in (75x50cm) layout that not only provides a bunch of places to switch but manages to circumambulate the board twice in the process! This inverted Figure-8 layout is being constructed by Andrew Smith, from Chelmsford, Essex England. Scale is OO9 (4mm to the foot on 9mm tracks). “Bryn Dibyn” is Welsh for “steep hill” — appropriate! 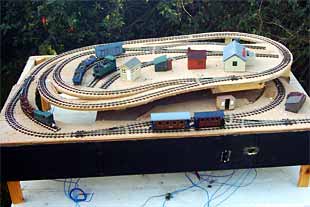 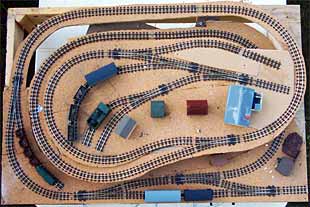 TRAMWAY ON A COFFEE TABLE 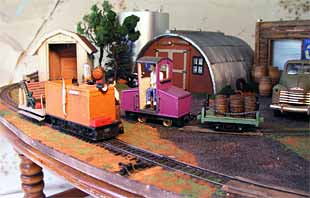 Jim Royal, from South Carolina USA, has built the Gn15 Lunar Glow Distillery Tramway to fit on the coffee table in his sun room, where he often puts it out for guests to enjoy. The layout is an oval measuring 44x26in (112x66cm), with a kickback siding providing a bit of switching action. But the main attraction is the tramway trains as they trundle around the loop in their brightly colored liveries.


Rick Perry, from Hurtsboro, Alabama USA, built this little portable 1/4in scale railroad in an old briefcase using On30 trains, Code 70 rails, and 5in (12cm) curves. It represents a hobbyist’s backyard narrow-gauge railroad “somewhere in Alabama.” Loco is a reworked Bachmann Porter, and the cars are coupled using a “rooster” (extension rod) to handle the curves. To give you a feel for the size of the little thing, the layout is shown in operation (below, right) at a recent model meet. 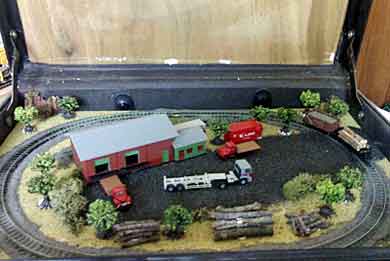 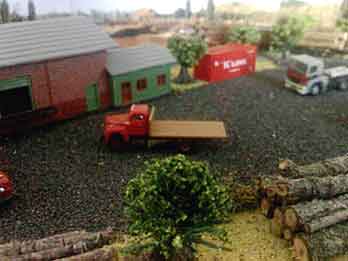 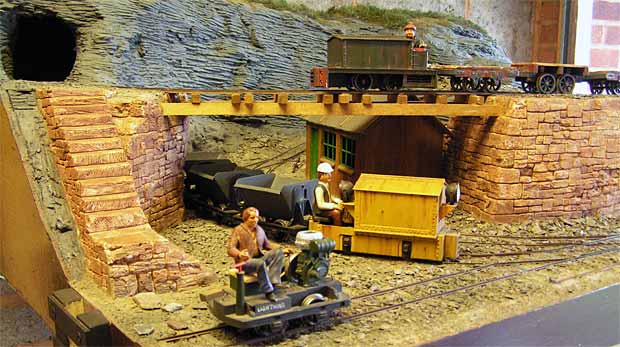 Questing for ever-larger trains on continuous-circuit layouts, we have unearthed the South Arpafeelie Mining Co., a tramway built by Steve Holland, from Birmingham, England in 4x3ft (120x90cm). The layout uses battery locos to serve a mine producing stewpidium trioxide, a dietary supplement often used by politicians. Scale is 16mm to the foot (1:19 proportion) running on more-or-less 32mm gauge (1.25in). Curves are 12in (30cm) and grades are 1:8 (12.5%). Turnouts are stub switches, except the single-bladed point (left, below) which is operated with a forefinger! Steve comments, “Stock can be swapped out of sight through an opening at the back of the layout, although putting stock on the track then coupling it up in a confined space on a 1 in 8 gradient can be interesting.” 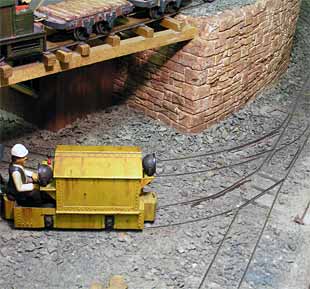 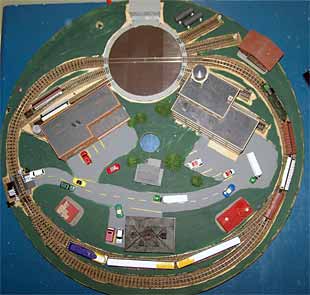 Shamus McMillin, from Saint John, New Brunswick in Canada, runs his N scale layout on a 30in (75cm) lazy susan circle. He partnered with his father, James, to build this version of my Columbus Circle design. 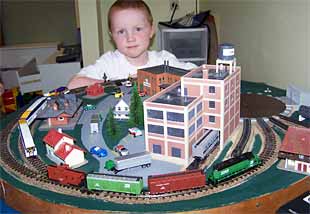 This continuous layout, cunningly disguised as a 1x4ft (30x120cm) shelf, is an O9/On15 effort by Graham Minshull, from near Norwich England. Scale is 7mm to the foot, runnng on 9mm gauge; curve radius is about 5in (12cm). Graham comments, “Operation is quite intense. With a bit of imagination the mine is located off to the left and the quay off to the right. The day starts with the workers arriving and going down to the mine. Then during the day tippers come and go and are exchanged in the sidings. Locos are fueled and serviced, and props and tools are sent to the mine. At the back are some hidden spurs so I can move things around. Also with the oval I can just watch the trains go by if I want!” 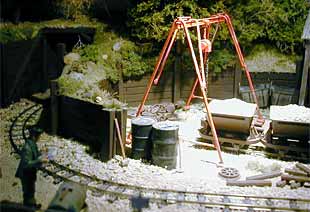 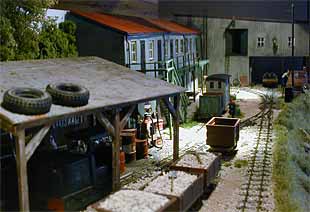