Inch for inch, the “bookshelf sized” switching layout
provides the most railroading fun of any layout style I know.
Here are a few small shelf-switchers that may give you some ideas! 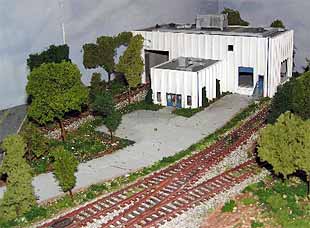 Says Kelly, “Each of the sidings will hold one car with its switcher locomotive, making some moves a bit harder than others. The mainline enters at the bottom right and continues to the bottom left with the industrial sidings to the top.”

Notice that the trackage avoids symmetry and does not parallel the sides of the baseboard, thus enhancing the realism of the scene. The track plan includes both a Timesaver-style arrangement (a runaround track with spurs coming off it, which I have termed a “Tymesaver”) and an Inglenook. Operations can include switching games as well as other operating systems. A lot of action in a small space! For updates on progress, see Kelly’s website. For information about Timesaver and Inglenook switching games, see the Shunting Puzzles website.

MORE ‘TYMESAVERS’ FROM CHINA AND SCOTLAND 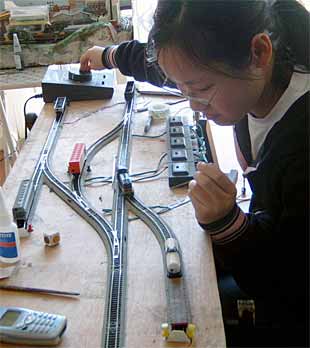 This classic Timesaver layout was built in China by Eric Belshaw, who now lives in Derby, England. Stationed in Shanghai for a time, Eric reports, “The girl was my friend’s daughter. I was persuaded to teach her English, but she also showed an interest in model railroading. so I made her this N-scale Timesaver with the rules, a coloured die and a switching stick for uncoupling. As she got better I developed the complexity, adding extra stationary cars or increasing the locomotive size.

“Eventually her mother asked me to arrange a similar layout in HO for her. I built three such layouts (one with a loop ) for Chinese people. Two are still in Shanghai, and the other has moved some 100 miles to Wuxi (Woo Shee).

“I took the original timesaver to work (Shanghai Metro Workshop) and started a model railway club which I hope is still running!” [ED NOTE: Do we have any readers who are members of this Shanghai model railroad club? Are the layouts still in operation? I’m always delighted to see that model railroading is truly an international hobby!]

Jack Trollope, from the Highlands of Scotland, has designed another very small layout combining Timesaver and Inglenook configurations. This one trades off “realism” for space saving, measuring just 63x12in (160x30cm). The top half can be used as a Timesaver, and the bottom half as an Inglenook switching game. The center track of the three-way switch serves both halves. The layout uses 40-foot cars, U..S. style, and no doubt can be used as a basis for a wide variety of other switching games!

A SHORT SHORTLINE FROM SCOTLAND

The Ross County Shortline is a Tymesaver layout being built by Jack Trollope, who lives in Ross-shire in the Scottish Highlands (Ross County is the name of his local football [soccer] team). This very-short shortline measures 57x8in and represents a small industrial yard beside the water, receiving its freight via a car float. There are many good prototype examples of such tiny knots of trackage. This layout is hinged in the middle and folds flat to fit into a small carrying box, along with the planned backboards.

The water (river/lake/sea) is removable, but the car float stays in position fixed by two brass tubes into the dockside. Operation consists of bringing the cars in (four at a time on the float) and distributing them to the various sidings served by the line.

Jack’s thinking about using an idler car to switch the float without tipping it from the weight of the locomotive. However, with cars distributed on most of the sidings, there may be no room to store such a car! Jack comments, “I may not bother, supposing that the loco is brought over on the float on Monday and goes back for fuel/service on the Saturday.”

This design takes full advantage of the flexibility of a car float, which can plausibly be used to introduce virtually any type of car or wagon into the layout. Jack’s trackplan is based on Wichard’s Wharf, an O gauge minimum space layout from Australia that appeared long ago in Scale Model Trains magazine.

Giles Barnabe, from London, England, reached back into his files to share these photos of a classic layout he exhibited some years ago. It’s an O-scale model of the three-foot gauge Majorca Railway as it was in the early 1950s, just before the end of the Steam Age.Giles recalls, “I modelled the proposed but never built station at Alcudia, where there was a ferry connection to Menorca. Eventually there was a second board that contained a hidden staging yard with a dockside scene in front, served by a couple of sidings. I also installed a turntable, as although the island only had tank engines they always travelled chimney-first.” 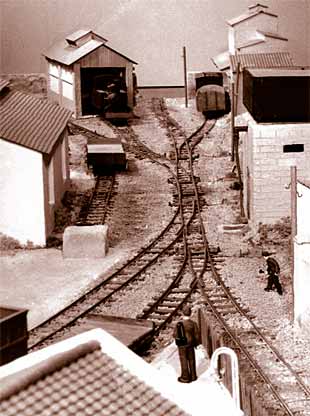 The layout was built on two wallpaper pasting tables, turned upside down so that when the sides were built up with another layer of timber the layout could be folded without having to remove the smaller structures (the model was about quarter inch scale so trees and taller buildings had to travel separately). If you’re using this idea in H0 scale, everything can stay on the board.

According to Giles, “The upright picture shows just about all the track on the first baseboard, while the other photo shows the arrival of a railcar. All buildings were based on real structures on the island, which gave the excuse for a couple of holiday visits to do the research. In the end I collected so much information that I was able to write a book on the island’s railways and tram systems.”

ONE OF THE SMALLEST OPERATING LAYOUTS

Exploring how small a layout can be and still operate as a working railroad, this Z-scale line serves a refinery, most of which is depicted on the backdrop! Designed by Carsten Weye Jensen from Holstebro, Denmark, this little industrial line measures just under 15x5in — and even with a six-inch cassette attached, its area is only about half of one square foot!

Cassettes are used to receive the “main line” trains at either end, and turn them around for a return trip. You can even use two locomotives on this tiny baseboard; the main line train can drop several cars onto the sector table interchange track, and a waiting second loco can push them into the various sidings serving the refinery. This layout is an excellent example of this site’s goal of “Doing More With Less!” 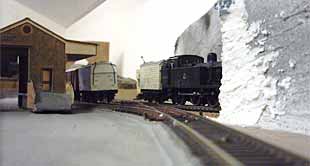 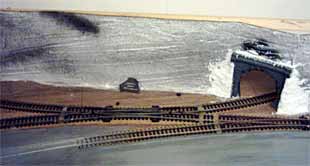 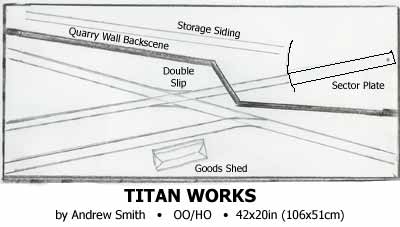 Andrew Smith, from Chelmsford in Essex, England, is building this fictional railway modeled after a real quarry named Titan Works in Essex. The line serves the old works which still houses several small industries and provides an area for railway storage as well. Titan Works Sidings models a small corner of the works and the remaining chalk walls, which the railway tunnels through to reach the area.

In addition to a busy prototype scene, Andrew has devised a a shunting (switching) puzzle for the scene using a card system for the rolling stock movements. According to Andrew, “One card is used for each of the roads and for the fiddle yard siding that holds five wagons, The two roads off the double slip hold five wagons. The head shunt (yard lead) holds an 0-6-0 tank loco and two wagons, as does the sector plate.

“One card represents each wagon. The road cards are dealt first and laid down, then wagon cards are dealt between these roads using the above formula, I have managed to use ten wagons so far but feel up to twelve could be used. ” That’s a lot of switching for a small layout!

ANOTHER CLASSIC FROM GILES BARNABE 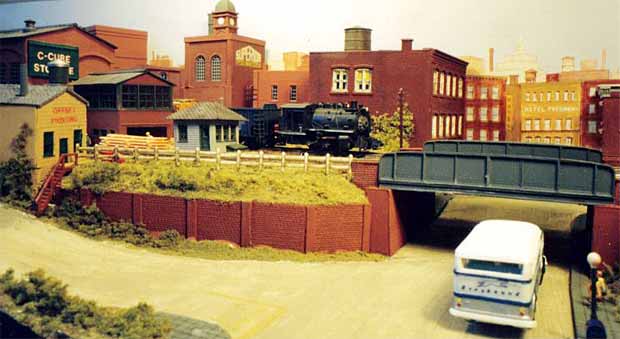 This interesting U.S.-style N-scale railroad, Mettrick Yard, was built and exhibited a few years ago by Giles Barnabe, from London, England. It originally measured one meter long (hence the name), but was later lengthened by a few centimeters to allow the dropped roadway which adds so much visual interest in the center of the layout.Giles notes, “The background buildings in the far distance were painted with very pale water colours on paper, cut out, and pasted on the sky-board. Closer buildings were painted with denser colours. With a foreground of low-relief structures this made the layout appear much wider than it actually was.

“As there was no run-round a local switcher was needed to assist arriving trains. The track hidden behind the left hand warehouses was used as a fiddle yard, though later temporary extensions were added at each end of the layout for model shows, which made operations much better.” 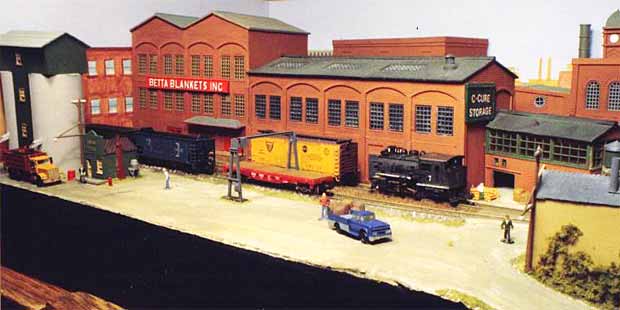 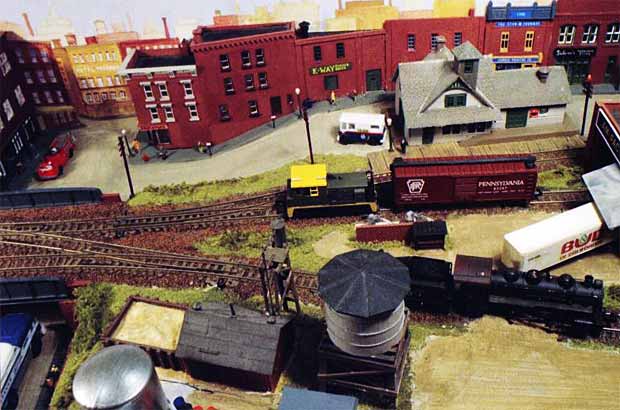 A TINY MINING LINE FROM HUNGARY 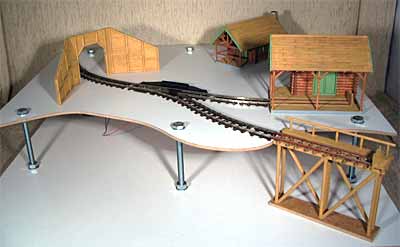 Dániel Balázs, who lives in Hungary, is building this tiny HOe (1:87 on 9mm gauge) line to depict a gem mine in a 40x40cm (16x16in) space. All the structures and buildings are scratchbuilt from toothpicks and barbecue sticks.

Dániel’s use of several levels should provide some very attractive scenery, especially around the spoils tip in the foreground. We hope to bring you more photos of this little line as work progresses.

BELGIAN VICINAL LINE IN A BOOKCASE 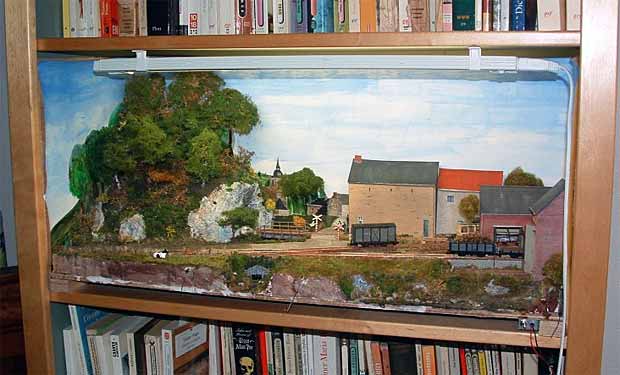 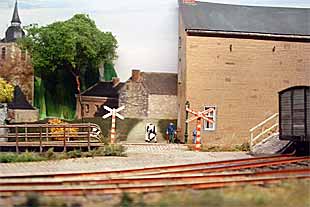 A model of a charming rural railway in Belgium was built in this bookcase by Laurent Hendschel, from Bruxelles (Brussels), Belgium. The scene is the small town of Mwinni (French: Mesnil) shortly after World War II. The meter-gauge railway is still actively working, although its line has been shortened until Mwinni is now a terminal. The plan of the HOm layout, which measures 75x32cm (30x12in), is shown in the photo above left, which illustrates how a concealed sector plate connects the trackage and makes possible a variety of switching operations.

In true vicinal style, railcars are used for both freight and passenger operations. Trains include four to five freight cars — one or two for lumber, one for the tombstone factory, two for the freight yard. The trains arrive from Bearin (through the tunnel on the left) and cars must be shunted to the correct places.

For more information and a detailed history of this (fictional) line, see Laurent’s website. To learn more about the extensive Belgian tramway system — Le Vicinal — a good starting point is here. 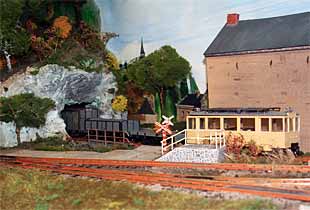 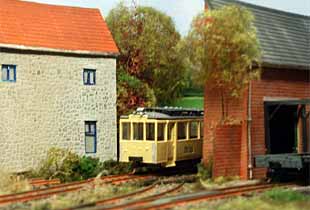