In the February Scrapbook, we took a look at long, thin layouts — which one wag dubbed “Ribbon Roads” — to discover the realism that point to point running can provide. The sense of actually travelling from one place to another. A lot of you agreed with us, and several people sent us their own favorite examples. So here’s the Return of the Ribbon Roads!

Nottery Quay began as a four foot long shelf line designed to fit over Chris O’Donoghue’s desk near Rye, England. “Then Neil Sayer (now owner of Victors Models) suggested I build an extension inspired by the Rye and Camber Tram,” Chris reports, “so he could run his R&CT stock. So the layout stretched to its current size.

“Because of the slow running I achieve through scrupulous track and wheel cleaning it really does have a feeling of travelling from place to place. (I have attached pictures showing the two ends plus one in the middle by the water tower.)”

I think Chris has done a remarkable job of capturing the Sussex landscape, especially the sandy dunes near the sea. Notice how the changing scenery helps achieve the sense of traveling. The fiddle yard to terminus plan is an excellent way to keep traffic flowing and yet achieve a sense of place and distance.

Nottery Quay has been exhibited often over the years, and had its final showing at Expométrique in Paris last December. It received considerable attention and not a few well-deserved accolades! Here are the pictures that Chris sent.

A THROUGH STATION FLANKED BY FIDDLE YARDS

An alternative plan — a through station with fiddle yards delivering and receiving trains at each end — provides the spectator with the sense of standing at trackside watching a busy railroad flowing past. Stock capacity is large in this plan, and its length is used mainly to acccommodate two full-sized fiddle yards, each the length of an average train!An excellent example of the through-station plan is Paul Gallon’s Fellburn, photographed by Emrys Hopkins at the York Model Railway Show in April 2006. Fellburn is an OO scale, 16.5mm gauge railway based on the north Tyneside electrified lines around 1947. Although not modeling any specific station or line, Paul has tried to achieve the atmosphere of the industrial, inner city setting of North Tyneside. The layout is 124in (315cm) long and 14in (36cm) deep.

Emrys’s photographs convey very well the feeling of a busy railroad setting, in a layout that is designed to exhibit a lot of activity.

AN AUSTRALIAN THROUGH STATION ON THE NARROW GAUGE

The same basic plan of through-station flanked by two extensive fiddle yards has been used by Sam Hyde, from Adelaide, South Australia for his railway under construction. “I am working out the details of a Nn3-1/2 South Australian 42in gauge linear layout designed to fold up into a size acceptable as ‘carry-on baggage’,” Sam reports.

For more information about the N scale narrow gauges, check out the Nn3 Home Page. (Thanks to Mark Fielder for calling this page to my attention!)

Another technique for achieving a long, slender layout is by using a series of bookshelf boards that can be hooked together to provide our trains with a long and varied journey. A pioneer of this technique in N scale was Giles Barnabe, who lives in London England. About 1980 he developed a set of N boards, including terminals, corners, and wyes (triangles) for a U.S. style layout called the Alderson, Dawson & Northern RR (the Greenbrier Line).

These basic sections represent the terminal at Alderson leading to one corner section. Other sections that Giles built are shown below. He describes the layout this way: “My Greenbrier line represented a fictional shortline that supposedly exchanged with the C&O at Alderson, W. Virginia. It was designed in a portable and modular format with straight sections of 39×10 in, and corners measuring 24x24in.

“Apart from the depot at Dawson with its associated turning triangle (a corner module) any section could be joined to any other, allowing maximum flexibility when attending modelling shows. All this involved some wiring complications so as to allow two trains to be controlled independently, though these could be circumvented if you were to use the plan today for a simple shelf layout.

“Operation used two hand-held controllers, and all turnouts were worked with push-rods from below the baseboard. Wherever possible buildings were kitbashed or altered, and the rolling stock was similarly treated. For instance a Bachmann “General” was updated to look like a 4-4-0 built in the early 20th century, and a steel combine and an F-1 were kitbashed into a Doodlebug.

“Actually modelled were the depot and yard at Dawson, a country section with a barn and grade crossing, a coal mine (corner section), a small wayside station – Blue Sulphur Springs, and a staging yard. Planned, but unbuilt, were a small industrial area (Asbury) and the depot and interchange yard at Alderson. I was later contacted by another modeller, Jack Trollope [a familiar name to readers of this site!] who in those days was also modelling in N gauge. His model shortline ran south from Alderson, so I painted up a couple of cars for his Greenbrier Midland to run on the AD&N along with the C&O transfer traffic.”

The sense of “going somewhere” is overwhelming in this type of layout!

ANOTHER SECTIONAL N LAYOUT FROM CANADA

Ivan Furlanis, from Italy, discovered a fascinating prototype operation not far from his home, and turned it into an excellent ribbon layout. Ivan writes, “I’ve just discovered an interesting freight operation on the wireless interurban Vicenza – Noventa, a line sadly
closed in 1978 and operated by Ferrovie e Tramvie Vicentine (FTV; the company is still alive today but operates only bus lines). About 1 km from the Noventa terminus there was the stop of Bergoncino, close to a factory that sent cucumbers via rail service. Problem was that at the Bergoncino stop there wasn’t a spur to store the cucumbers’ freight car, just the main track … so the freight car had to be loaded very fast, between one train and another!“The service worked in the following way. A railcar with an empty Interfrigo refrigerator car started its journey from Vicenza to
Noventa, stopping at all the stations, included Bergoncino, to load and unload passengers. At Noventa the double-ended railcar ran around the freight car and came back to Palladio’s city, leaving the Interfrigo at Bergoncino where it was loaded with fresh cucumbers. About a hour or two later another Noventa-bound railcar arrived at Bergoncino and PUSHED the freight car back to Noventa! Eventually, the railcar with the loaded Interfrigo left Noventa and came back to Vicenza.”So, I designed an H0 shelf layout depicting Noventa terminus and Bergoncino stop where it is possible to show this interesting operation. Trains enter the layout from the right end, where there is a cassette or a small fiddle area, they run on a small street side section with Bergoncino stop and then they arrive at Noventa where there is a passing siding and two spurs to store some passenger trailer or freight car. The designed layout measures 10×1ft but it can be easily adapted to virtually any space or scale, as well it can be set everywhere in the world.”What a wonderful excuse for running colorful tramcars back and forth, and have some freight service as well! Ivan also sent some photos of the cucumber car maneuver showing the pickup atBergoncino and the car delivery back at the Noventa end. I hope someone will want to model this marvelous prototype, and if you do please send photos for this Scrapbook! 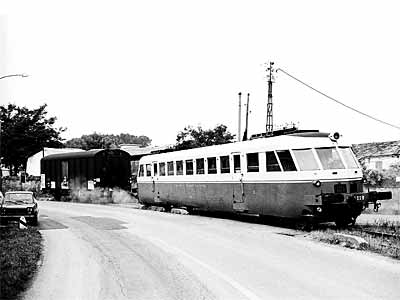 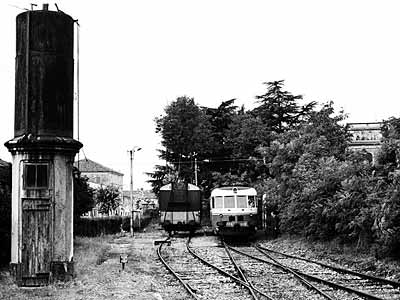