As you might expect, we receive a lot of information that does not fit neatly
into the themes used for this Scrapbook. It accumulates in the files, until
we have enough material that we think is worth bringing to your attention, and
then we publish an issue devoted to our collection of good STUFF. Here ’tis! 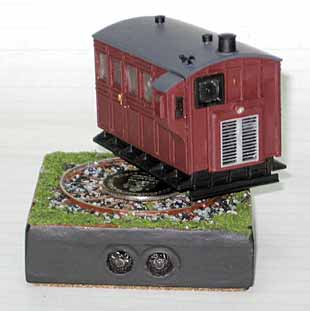 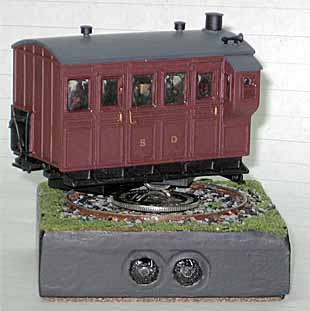 Possibly the smallest pizza layout ever built — and almost certainly the smallest operating radius ever used in O scale — was sent in by Mike Mackay, from Dartmouth, Nova Scotia, Canada. Mike explains, “The Silver Dollar Tramway is 0n30 (fairly accurately to scale, because gauge was opened up to about 17.5 mm to handle the radius) with dimensions 3.5×3.5 inches . The ‘baseboard’ is a piece of 2×4 cut square. The inner track is a promotional dollar coin, about 32 mm diameter. Since the motive power has two solid axles — albeit realigned as shown — the coin is free to turn in order to minimize wheel slippage. The carbody is a Peco 0n16.5 coach; the power from an old diesel truck [bogie].” Wow! Anybody have a smaller candidate (in O scale)?


FROM OUR PAGES INTO REAL LIFE… 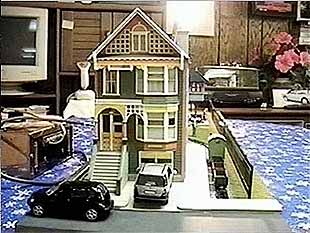 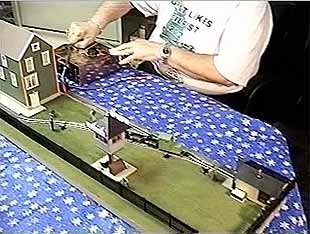 Reader Terry Bossick, from Roseville Michigan USA, not only reads this site, he does something about it! Terry signed up to give a clinic about micro layouts at his regional NMRA meeting in Michigan — and he presented it in the form of a video that included several layouts he built from designs he found here. One of my favorites is Terry’s version of the Park Terrace Railway, a fictional backyard railway that Chris Gilbert, in Mansfield England, designed to fit with his house. Terry’s delightful version of this little line is shown above in two frames from the video. In the video, Terry spends a minute or so on camera, happily running the little train back and forth on this On15 (O scale on 9mm gauge) shelf line.

HOW THINGS CHANGE FROM DESIGNING TO BUILDING! 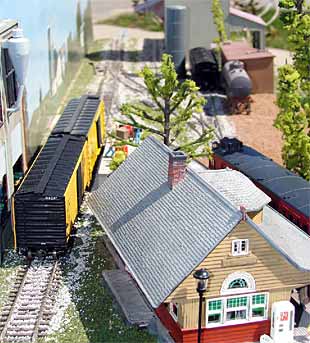 A very nice shelf layout design is Pine Ridge by Canadian Stephen Christopher. The design originally appeared on this site as a CN branchline terminus located in northern Ontario. It’s even featured in my new book [shameless plug – it’s on page 10] along with a couple provocative variations from the fertile mind of Jack Trollope.

But as often happens, Stephen changed things in the course of building the layout. The “as built” design is shown in these two photos, and the plan is clearly visible on the control panel in the top photo. It’s a very nice switching layout — and quite different from his original design! We featured Stephen’s new design as a work in progress in Scrapbook #42 — and here are some up-to-date photos of the nice-looking finished layout.

We’ve received several items lately from folks who are using “toy” materials to create interesting small operating layouts. They provide a good example of what Vane Jones used to call, “The fundamental technique for good modeling — scrounge!” Take a look…

Gary explains, “Three modules are complete — a cut over with Woodland scenic stumps, an outdoor engine terminal with Woodland oil tanks and a log landing with a modified Hallmark Christmas tree ornament tractor. Ground cover is a ready mix joint compound and sawdust mix (I’m a carpenter). The logs are from my yard, and the loco and flat are modified from the XTS equipment. The complete layout is 18x6in. I plan to add a fourth module with a small gold mine.”

And Gary concludes with a comment made by many people who build their first small layout: “Very happy I found the micro layout concept. Finally a finished layout!” 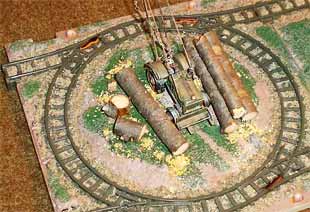 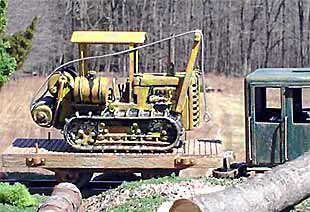 Bob Hughes, from Sandbach, Cheshire England, used a “toy” technique to animate a tiny N-scale layout without using a motor. He calls it “puppet strings,” and he developed it first for a 19x4in N scale display layout called Schläfrigetal. The train is powered by a loop of fishing line tied to the railcar underframe and looped through the ends on the layout and out of sight round the back, so there is no need for an electrical supply. As a result the layout is truly portable and can be used literally anywhere!

Bob explains, “Schläfrigetal? It is German for ‘Sleepy Valley,’ for no better reason than that I liked the name (and happened to have a German VT135 railcar with a burnt out motor).” Bob also liked the puppet strings technique so much that he adapted it to his 23x7in Gn15 exhibition layout, Hayfinch. 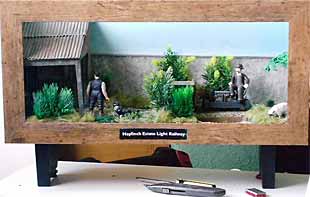 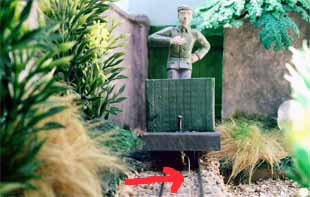 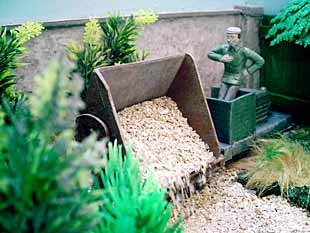 Hayfinch consists of a length of straight track and uses a picture frame to focus attention on the railway. The line hauls gravel from the crusher at left to the tip at right, and cars are visibly loaded and unloaded at opposite ends. Hayfinch can be operated conventionally, with motorized locomotives, or in “unplugged” mode using horizontal puppet strings (fishing line) to pull unpowered locos. The “puppetised” loco is shown above at right. Bob points out that this arrangement allows him to operate Hayfinch while also running another layout at an exhibition — and he only needs bring one electrical controller.

I like the way Peter’s track curves and davoids parallel lines. He uses link and pin couplings, so has no problems about couplers mating on curves and such. Stock is almost entirely Gn15 kits from Sidelines Models. Peter has two locomotives, and he encountered problems in electrical continuity due to the short wheelbases of the Tenshodo Spud motor units. He solved the problem in what to me seems to be a unique way; “I built a simple battery box — four rechargeable pen cells (AA), a switch to reverse direction, and a push button to GO. No speed control was needed on just four cells. A simple umbilical [runs] from the loco to the box, and it works very well…So now I have a very reliable and fun layout. I do not have to worry about cleaning the track, just press the button and the train goes every time.” 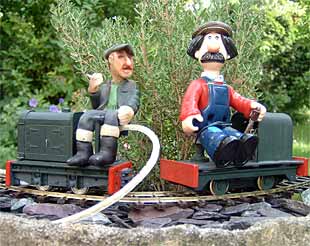 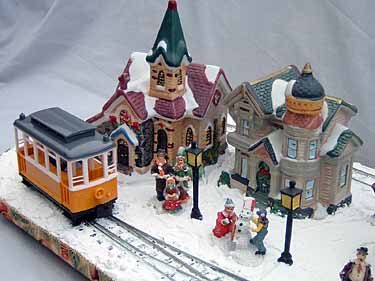 About the figures: “I saw a ‘Postman Pat’ figure set in the shop. This is a children’s TV cartoon character about a postman and his pet cat. They looked fun and were reasonably cheap. Adds something to the proceedings to have people about.” 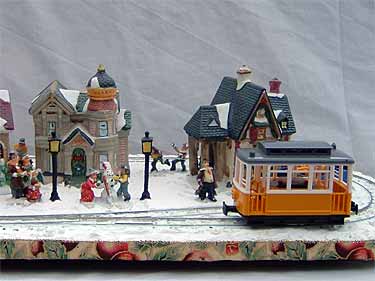 And finally, about operations: “I use six wagons with the game to make a three car works special train, chosen by rolling 3 four sided wooden “dice”… Letters or numbers on the dice indicate what the train will be, e.g. R=red barrel, 3=3 plank wagon, F=flat. Each wagon appears twice on the dice, and if you do get a ‘double’ one of the dice is rolled again. In addition to this I am not allowed to leave any stock on the siding in front of the loco shed/tool store/office in case access is needed later in the day — and this adds a nice bit of complexity to the game!”

Ed Note: Sounds like a lot of fun to me!

This S-scale Inglenook was built on 108x12in benchwork left over from an On30 portable layout, by Charles Malinowski, from Carmel, Indiana USA. He calls it his ‘Singlenook.’

Charles comments: “I used BK Engineering turnouts, Tomalco flex track and Caboose ground-throws (HO) all mounted on a 12x48in section of Homasote. The base benchwork is the recycled staging yard from my On30 portable layout mounted on cantilevers to the basement stud wall. I find the ‘puzzle’ challenge a refreshing change from my HO Timesaver that I built a couple of years ago. Already I have spent (misspent?) many happy hours working the yard!” 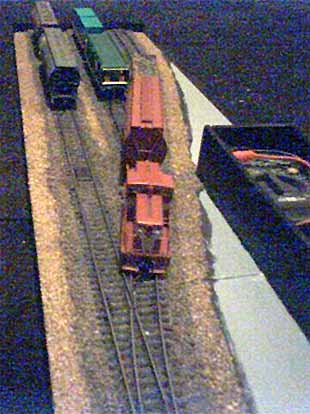 And this HO-scale Inglenook was built by Sean Sunley, from Werribee, Australia. Sean describes it this way:

“It is built on a 5ft x 8in plank. The long modern style wagons are not ideal for a micro-layout but they fit and are the same as I use on the club layout. The points are medium radius which again suits the wagons but not a micro layout.” That said, Sean has built a good looking 4-2-2 Inglenook railway!

Technical note: Sean does not have a digital camera, so he took these photos with his telephone! Not bad looking, I’d say.

AND WHILE WE’RE TALKING ABOUT SWITCHING GAMES…

From ever-inventive Jack Trollope, who lives in the Highlands of Northern Scotland, comes this switching game/puzzle. Jack explains, “The objective is to swap each car in the train for one of the same colour in the sidings, but reassemble the outbound train in the opposite order. As far as I can see this idea will work and keep the operator occupied for quite a while!” Anyone want to try it?

This carefully planned small layout was designed by Giles Barnabe, from London, England. Says Giles, “As soon as I read Jim Boyd’s article on the Edgmoor & Manetta in the RMC for March 1972 I was hooked; though I’ve never managed to model it yet I’ve produced shelf-layout designs as well as this 4x2ft in N gauge (if you wanted to do it in H0 you’d need 8x4ft I guess). As I’ve altered reality a little and made up the details of the junction at Edgmoor, perhaps I’d better call it the Edgmore & Lando, to avoid annoying the purists. As drawn the main line lead is a little short. To extend it you could have a drop-down hinged extension that only gets raised to the horizontal for operating sessions.” 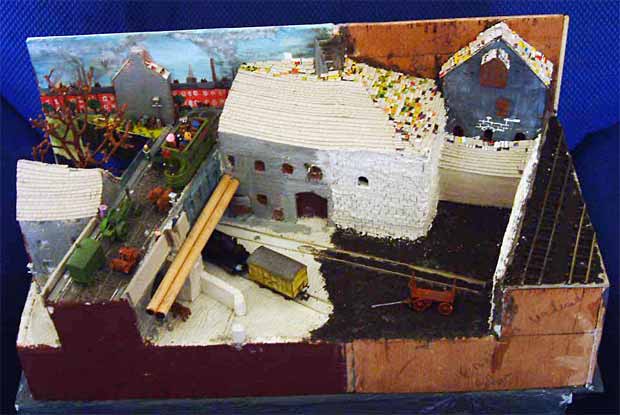 Inspired by this website, Marc Miller, from Tyne & Wear, England, is building Brewhouse Yard, an N scale shoebox layout set in the Edwardian era (early 20th century). Marc comments, “The size of the layout is 37x17cm. I’ve been building it for about six or seven months and it’s not yet finished, as you will see from the attached photos. The trackplan is basically a sector plate serving three sidings. I’ve had great fun building this especially as I can sit it on my lap and do some modelling while watching TV. True armchair modelling!” I particularly like Marc’s busy tramway overpass (lower right). 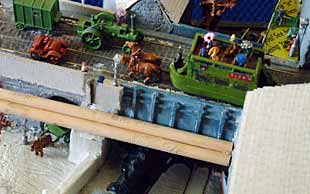 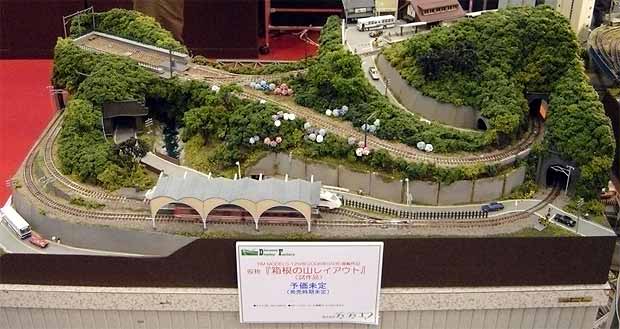 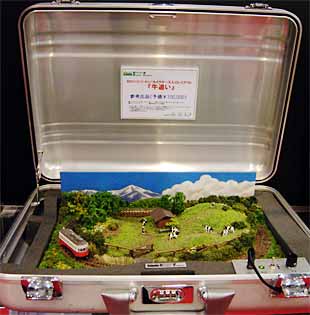 Our Japanese Correspondent, Hiromi Masaki, sent along these photos taken recently at the Shizuoka Hobby Show 2006, one of Japan’s largest hobby exhibitions. These elegantly turned out small layouts, mostly built in N scale, are commercial products of a company named Diorama Display Factory. According to the signs in the photos, the cost of each is around 80,000 to 100,000 yen — about $700-$900 U.S. dollars.

Although not many of us will be in the market for one of these little gems, Hiromi points out that we can learn much and take inspiration from these well-done small layouts. “These are good references for our modeling,” says Hiromi, “because [they are] nice reductions of the prototype.” So we’ll finish off this month’s Scrapbook page with some more photos of delightful scenic modeling from Japan. Domo arigato, Masaki san! 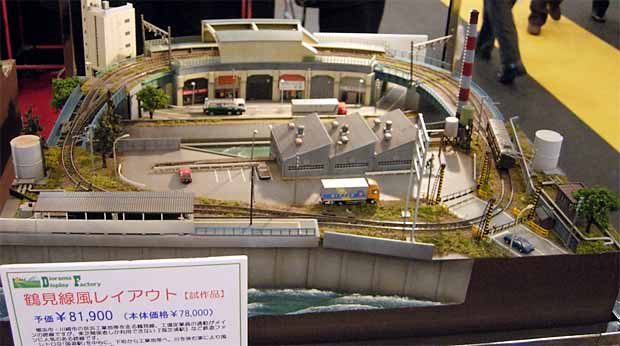 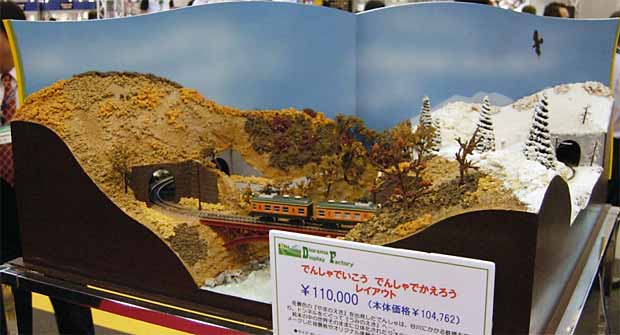 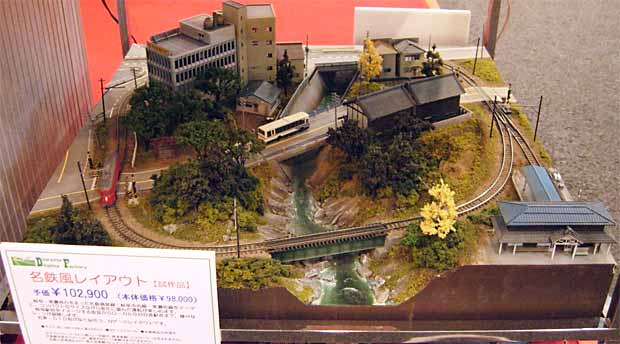