Square inch for square inch, there’s no more rewarding layout style than the
shelf layout. Shown here is a dramatic example of how fine scenery and interesting
trains can combine with good operation on a shelf. This is Fabrice Fayolle’s fabulous
“picture frame” On30/0e layout, Josephtown Craddonium Co., shown at its final
exhibition (see plan in #24). In the next few issues of this Scrapbook,
we’ll be bringing you some more outstanding examples of shelf layouts.

The most familiar shelf layout design is undoubtedly the “Tymesaver” (the term is my coinage to indicate any layout that is basically a runaround loop with spurs sprouting from it). The original name comes from John Allen’s well-known “Timesaver” (see #4) … so layouts that have similar but not identical track patterns to John’s famous design can be termed “Tymesavers”. For example…

Bill Dixon’s Tymesaver was inspired by John Allen’s design, but Bill added spurs and rearranged the hand-laid trackage to improve switching opportunities. The layout measures 58x8in and uses Shinohara Code 70 track and turnouts. It’s designed for 40ft cars and can handle several more than are shown. Bill lives in Vancouver BC, Canada.

A few years back Giles Barnabe, from London, England, built this exhibition layout depicting Stratford-upon-Avon as it might have looked around 1931 if its Victorian horse-drawn tram line had survived as a steam-powered light railway. The backscene shows Stratford pretty much as it was then (taken from a museum collection of period photos). The layout features Stratford Waterside station which was situated along the canal basin opposite the Royal Shakespeare Theatre (offstage to the right in this design).

Says Giles, “At the period of the layout the theatre is being built, so the materials can be delivered to the door by rail, which has helped freight receipts. However once the building work is complete, the town council will want the railway site for ornamental gardens so the outlook for the railway is not exactly rosy… 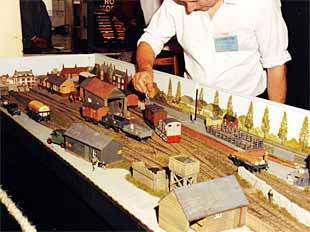 “I used folding baseboards, hinged in pairs – the ones shown [at right] plus another with the line crossing the river and entering hidden fiddle tracks. Each board measured 3ft 3 inches by 2ft, so the whole layout was 13 feet long – not exactly a small layout, but small for a complete station in O gauge.” 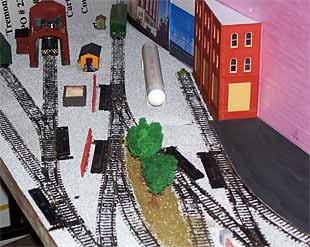 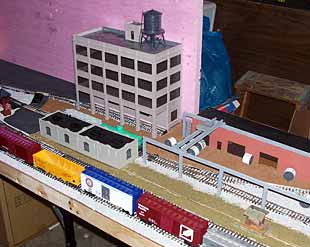 Steve Ward, from Grafton, Ohio USA, built this 78x18in (198x45cm) version of Norwest Terminal, an HO layout by Matt Chibbaro from a Kalmbach book on small layouts. Because he uses DCC Steve is able to operate from the front, leaving an open space at the right rear that was a fiddle area in the original rear-operated design. He filled it with a model conveyor-belt company that sports an impressive outdoor crane and scaffolding (right photo).

“I operate with a switchlist now,” reports Steve, “but I’m setting up a car card system…I did an operation the other day of 8 inbound cars and 5 outbound cars with one inbound car having a bad order. The bad order car must be placed at the R.I.P. track first, then cars spotted and picked up. Then the bad order car is set at the industry last to complete the operation session. It took about 45 minutes to finish the session.” 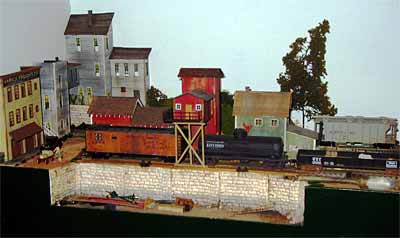 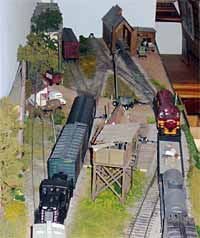 Another plan inspired by a Kalmbach book is Quincy, by John Peckham, from Torrance, California USA. This 6x1ft (180x30cm) HO Tymesaver is adapted from an Iain Rice design in 2003 Model Railroad Planning. “This layout is set on the coast of New England sometime after WWII,” John reports. “The operating sequence is a twice a day milk train for the Hoods creamery, a once a day passenger train for service to Boston, and a couple of daily freights. The industries are a machine manufacturer, Hoods Creamery, freight house, ice house (the tall red building next to the dock) and a small fish market…I use the card order system that has been around forever and is now available from Micro Mark.”


Another “switching game” design, the Inglenook layout, is very popular in Britain where it was invented, and is increasingly being tried in the U.S. It has the merits of simplicity, small size, and an entertaining game to play. You can read all about it (and about Timesavers) at Adrian Wymann’s excellent web site, Model Railway Shunting Puzzles. Meantime, here are a couple of good-looking Inglenook layouts. 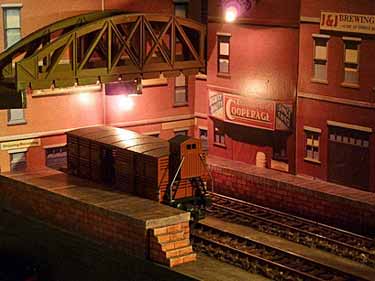 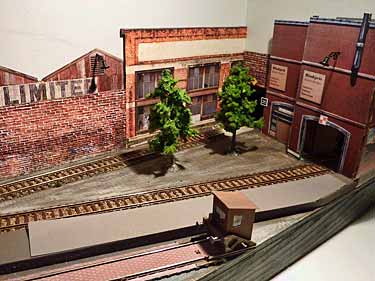 Olivier Jeanneret, from Pully, Switzerland, is building this ingenious layout, Bichou’s Yard, using several ideas from this site and adding in a good bit of imagination! The 100x22cm (39×8.6in) HO track plan is based on Martin Hogg‘s Middle Street Inglenook design, with an unusual second sector plate thrown in to add flexibility to operations.

The scenery is much like my Peek’s Pike layout using some of the same background building flats (computer printed in 1:87 from images found on the Internet). “My concept at the present time,” comments Olivier, “is to decorate the layout not exactly as a 100% copy of the real world, but rather as an image of it like in a cartoon or a theatre background.” We’ll try to keep you posted on this clever layout as it continues toward completion. 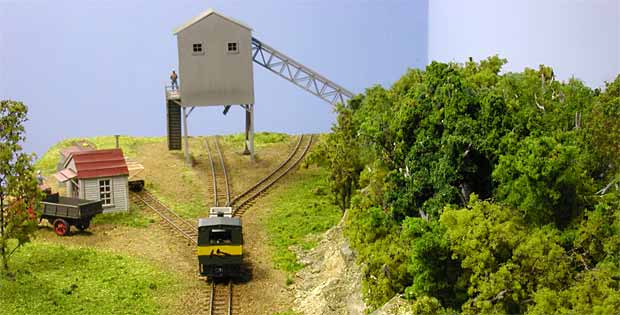 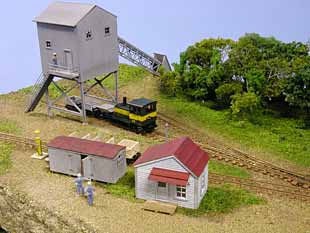 Pastor Robert Mountenay, from Wayne, New Jersey USA, built this appealing little HOn30/HOe Inglenook on a 39x13in (100x33cm) foamboard shelf. The AHM Minitrains were a present from a parishioner, and Robert scratchbuilt the rock crusher from styrene, based on the old Suydam Black Bart mine.

This charming little layout was Robert’s first micro, and he’s already started thinking about his next one! Meantime he’s putting the finishing touches on a more traditional 4×8 HO table top empire.


We’ve already encountered sector plates (above, in Bichou’s Yard) and seen what a boost they can give to operations on a small layout. They’re sometimes used in the prototype (especially on narrow-gauge lines), so it’s not stretching the imagination to leave the sector plate right out in plain sight where the audience can enjoy its majestic swing from side to side. But most of the time, the plate is best used when it’s hidden backstage, working to keep traffic flowing and to help the layout fulfill its operating destiny. Here are two excellent examples, at opposite ends of the size spectrum!

Martin Edwards‘ Minim Mfg. Co. layout is an OO scale micro layout only 24x12in (60x30cm), representing an industrial siding serving a small animal feed mill and warehouse. Martin, from Combs, Suffolk in England, comments, “In spite of its small size it has a hidden fiddle yard, two sidings and a run-around loop. The secrets of its small size are two hidden sector plates, one in the feed mill and the other behind the water tower.” Our thanks to Ian Bareham, who took the photo at the Stowmarket RC Train Show earlier this year and forwarded the information. 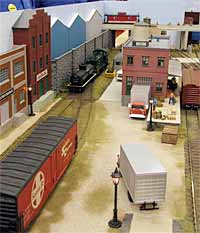 Far to the north in Scotland, the Forth Model Railway Group uses a very large sector plate to serve as the fiddle yard for its U.S.-style layout, Cascade Yard East. The layout is set in the Pacific Northwest of the USA in the shadow of the Cascade Mountains, close to the Canadian border. The shortline is run by The Pacific Great Western RR, and connects the town of Cascade to Cascade Junction on the Burlington Northern mainline between Seattle and Vancouver.

Shortliner Jack Trollope, who lives in the Scottish Highlands, snapped some photos of the layout during the 2006 Perth train show. He writes, “This layout has been built by Dave Thomson of the Forth MRG and was only completed very recently. This is its first showing and also the first photos. The layout is 12 feet long by 2 feet 3 inches wide and is in O gauge. It would make an excellent basis for a layout in HO as well, only having four turnouts.”

Jack drew up the layout as an HO design (shown below) in 72x14in (183x36cm). I prefer the O scale version, though, because there’s something very attractive about watching these big trains (notice the 50ft boxcars) trundling around in a relatively small area, doing visible railroading work due to the backstage efforts of the sector plate. The wheels even cluck over the frogs — very prototypical! 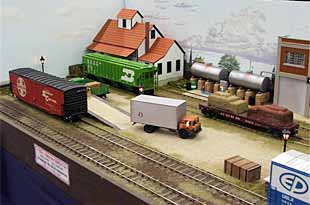 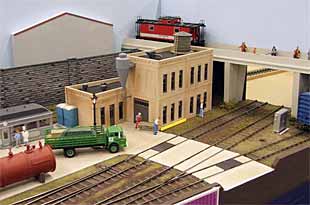 Continued next time … Traversers, Turntables, and Much More!