Natural candidates for small layouts are trolleys, trams and
streetcars, often referred to as “traction.” They thrive on
very tight curves and an entire train can be just one car long!
Here are some recent examples of small layouts that
explore the satisfactions of the attractions of traction. 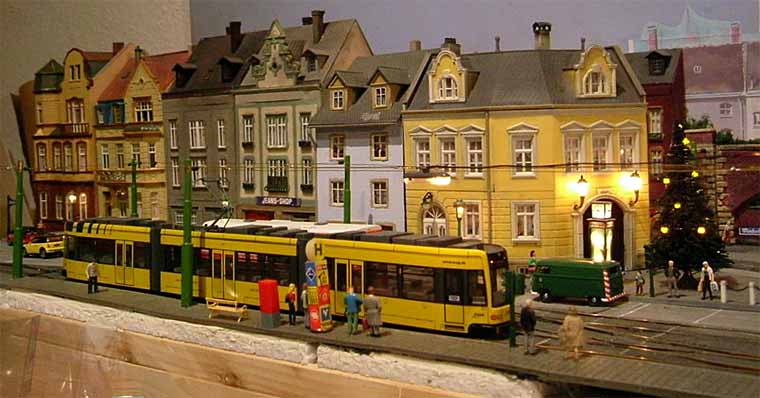 Guido Mandorf, from Düsseldorf, Germany, is rebuilding his HO traction line as a series of small-space modules. The photo above shows Module 1, which measures 120x40cm (48x16in) and represents a typical urban scene in the 1950s and 60s. The end-view photo (below, left) shows the entire track plan of the module. It features a double-tracked standard-gauge line with a short branch to the factory, plus a meter-gauge line that emerges from behind the city buildings and crosses the standard gauge tracks. The working overhead wire is scratchbuilt from 0.4mm brass wire. 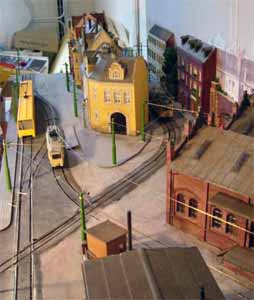 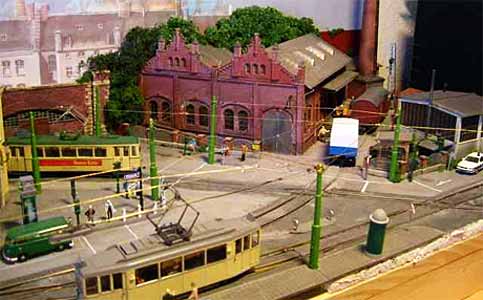 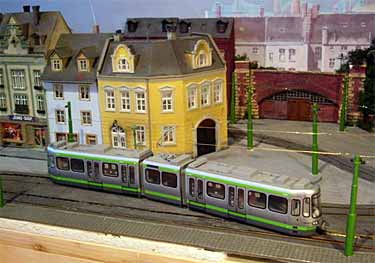 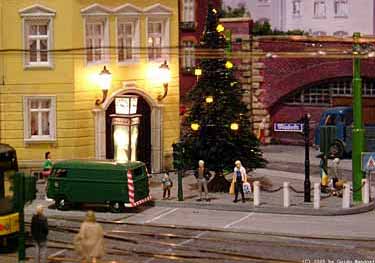 Module 2 (shown below) is now under construction. It measures 80x40cm (32x16in) and will be attached to the left side of Module 1. The standard gauge line branches via a handlaid three-way switch to a small car barn (tram depot), and the meter gauge is also extended into the barn. The narrow gauge shares a stall with its larger cousins via a stretch of dual-gauge trackage. Future plans call for a third module extending to the right. You can see lots more photos of this delightful tram layout at Guido’s website. 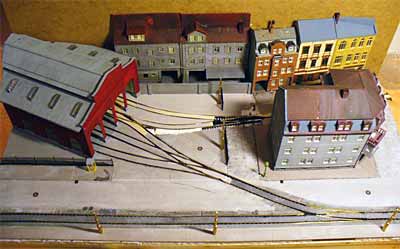 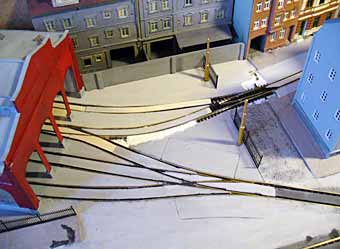 CONVERTING A TRACTION LINE TO A DOODLEBUG HAVEN

This very small layout, called Camden, Maine, is being built by Ivan Furlanis, who lives in Padua (Padova) Italy — a long way east of the prototype! The layout will fit in a glass-front bookcase, and Ivan began building it in order to provide a place to run his new Bachmann B&M Doodlebug. What has this to do with traction? Well, here’s the story as Ivan tells it:

“The layout … depicts a small and compact shortline terminal in the 1950s served by the fictional Atlantic Electric Railway Company, or simply AE, a former interurban railway network that operated from Rockland to Warren, Crescent Beach and Camden (in the real life, these towns were once really linked by two trolley lines). In the 1940s the wires went down
and AE sold the electric steeplecabs to buy some diesel engines, rebuilt the “main” line to Camden with more railroadlike standards, abandoned the branch to Crescent Beach (but tracks remained in place), and replaced the trolleys with diesel buses. Soon it was obvious that buses had difficulty running the hard road between Rockland and Camden, so, AE decided to reintroduce a minimum of rail passenger service between these towns served by a Doodlebug hired from B&M.” Got that?

The modeled part of the line (below, right) features a small freight house, a ticket shed and an industry that Ivan calls Carl’s Imports. It represents “the other side” of the Carl’s Imports layout! There is also a short car barn. Its track
continues off the layout to hold the long Doodlebug and connects with the Main Street track in the fiddle area via a turntable (not drawn) to complete the runaround. Ivan has placed this plan on an aerial photo of the real Camden, Maine (below, left) — and has even included the imagined location of Carl’s Imports! 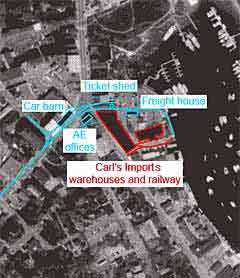 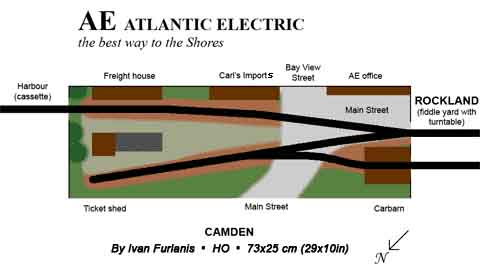 Ivan explains the layout’s operation this way: “A (small) freight arrives from the fiddle via Main Street, the engine uncouples and can run throught the car barn to couple at the back of the freight so it can push its cars to the freight house and Carl’s Imports. This spur extends off the layout into a small cassette that represents Camden wharf. So in total there are three places to spot cars. When the shunting is done, engine and caboose enter the car barn and disappear.

“Then the Dooodlebug arrives in Camden via Main Street, pauses at the ticket shed to unload passengers and backs into the car barn. Meantime, engine and caboose enter from Main Street and start to build the Rockland-bound freight. When its duty is completed, it leaves the ‘stage’ and goes into the fiddle area. Then the Doodlebug reappears from the car bar (with the cab at the opposite end, thanks to the turntable), waits for passengers and leaves for Rockland. The curtain drops!”

Ivan has a great interest in traction — see his website for his many beautiful photos of Italian and European trams!

Andrew Knights, from the Wealden Railway Group in England, displayed this tram (trolley) micro layout at his club’s annual exhibition of small, personal layouts. It’s HO scale, and is the size of two sheets of A4 letter paper placed end to end! You can get an idea of how effectively Andrew has used the space from these photos by Terry Allen. Truly, everyone has enough room for a model railway layout! 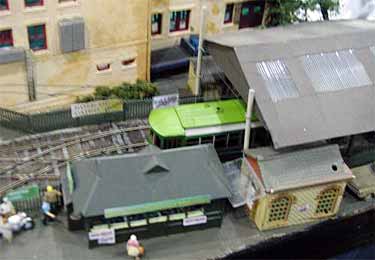 From the Netherlands, Vincent Wesstein sent me an amazing plan utilizing the actual trackage formations of one of the canalside trams in Amsterdam. Excellent as it was, I felt it might be made smaller and more accessible by eliminating much of the special trackwork required to model the actual tramline. The result of this collaboration is shown at the right … Amsterdam Canal Street. The layout represents one block in central Amsterdam. Canalside buildings face the streets on either side with the canal in the center. The trams run over bridges at each end, under which the canal disappears from view.

To provide a little variety in runnng, a repair shop is included at the right side. While not strictly prototypical, this gives us a chance to hide one spur of track where cars can be introduced, fiddled, and removed from service. This little layout could be a scenic gem! 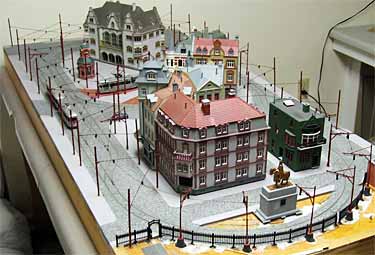 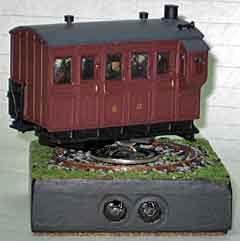 Mike Mackay, from Dartmouth, Nova Scotia, Canada, is building this elegant but as-yet-unnamed HO European style trolley layout in a 60x27in (150x69cm) space. “The long wheelbase cars,” says Mike, “squeal nicely going round the minimum six inch radius! At this stage virtually everything has still to be detailed, painted, weathered, etc — not to mention populated and foliated.” I don’t know about you, but I think it’s pretty nifty already! Yes, the overhead wire works.

While pulling together the material for this page I happened across some very old Polaroid photos of an early trolley layout that I built in 1963, Squirrel Hill Transit (named for the Pittsburgh neighborhood where I lived). It was 6x2ft (180x60cm) and the overhead wire really worked! I also found an old pencil drawing of the layout plan, more or less the way it was built. The photos are superimposed in roughly their proper positions on the layout. Scenery never got much past the stage shown before we moved on, but I had a lot of fun single-handedly juggling three cars running at the same time! The track was divided into electrical blocks, and the overhead was used as the common return — just the opposite of the conventional wisdom at that time. 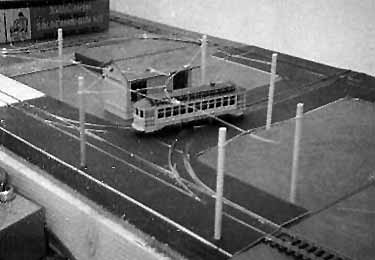 And shown here is the beginning of a traction micro layout that never got much beyond this sceneryless stage in 1963. This is also HO and represents the country terminus of a short interurban line named Sic Transit (a dreadful pun). I offer this poor-quality Polaroid shot to show one attempt to make an automatic reversing wye to turn single-ended cars for their return journeys. The wire frog at the top right was biased by tilting it slightly so the pole would always move to the right when pushed through the frog. Thus the car would approach from the bottom right, curve to the right, reverse and back through to the upper left, then pull forward and return whence it came. It worked quite well!

Shown below is the original drawing of this line, unusual because it is designed for continuous operation without a continuous loop or oval! All switches are “sprung” (indicated by arrows) to allow traffic in only one direction from the toe of the switch (although trailing moves can be made from either branch). Automatic control allows a car to originate at the return loop (balloon) in the street beside the Park, travel to the wye at the other end, turn into the branch, stop and back into the passenger terminal, and after a suitable interval to return whence it came, rounding the reversing loop and ending up in the street. Stopping blocks are marked with an “S”. Of course, in 1963 all this would have been accomplished by using a large, overheated bank of relays! In the event, the layout was operated entirely manually. 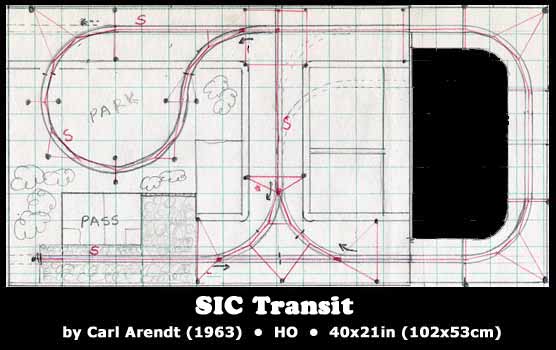 TRACTION ADDS GLAMOUR TO On30 PROMOTION 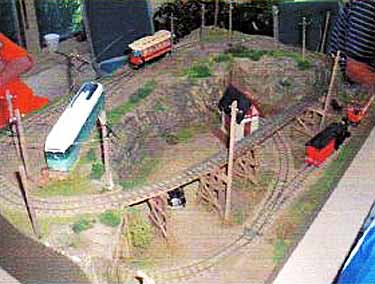 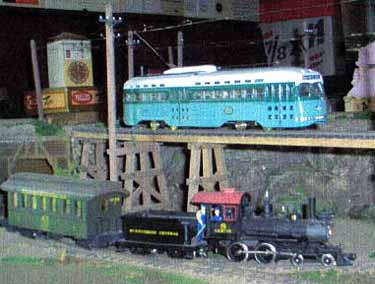 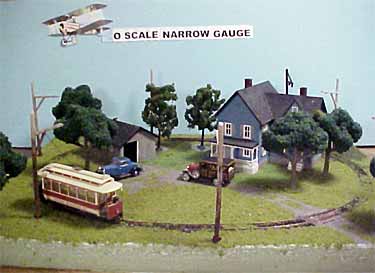 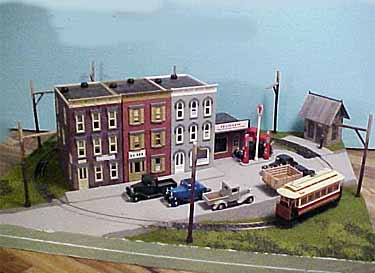 Stumpy Stone, from Martin’s Ferry, Ohio USA, has built not one but two On30 micro traction layouts! These 24x24in pizza layouts are intended for display to promote On30 scale (who can resist the barnstorming pilot with his big “O Scale Narrow Gauge” banner!). The two layouts can be operated separately or together when they’re connected by the two sneak-off tracks provided. The bases are 2in thick extruded styrofoam insulation. Structures are repainted and detailed MTH units, including some pretty provocative details in the high-rise windows! For more construction information, see Stumpy’s page on the On30Center web site. 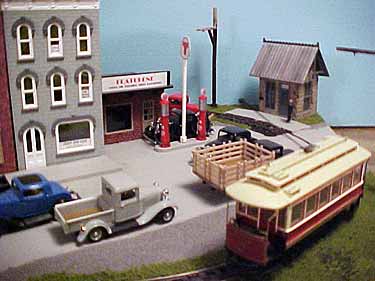 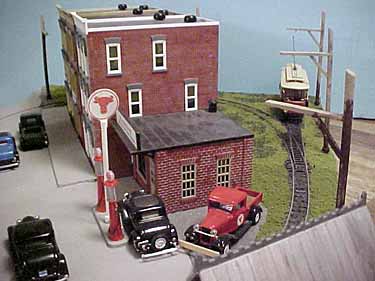 Stumpy cast the resin trolley poles in his own molds. The poles plug into plastic tubing mounted in the styrofoam base, so everything is readily removable for portability. “While many traction modelers are attracted to trolley modeling by the overhead wire work, the overhead is also the reason a lot of folks don’t do trolley layouts,” Stumpy observes. “This layout suggests the overhead wire without actually installing it.”

URBAN TRACTION WITH AN AUTOMOTIVE FILLIP 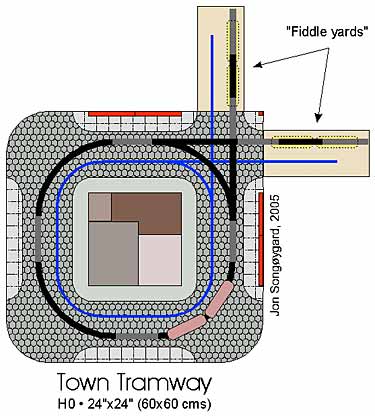 Jon Songøygard, from Arendal, Norway, designed this 2x2ft (60x60cm) urban tram line based on the Luna tramway track system, which features molded street surfaces as well as complex trackage. This interesting product demonstrates once again the value of very small layouts — not a great deal of this expensive track is required to make a satisfying layout!

Trams (and autos) start out from one fiddle yard and run around the circuit a few times, then exit into the other fiddle yard, making room for more trains or vehicles.

The building block in the center and several rows of building flats or low-relief models (the red strips) establish the city atmosphere. Jon has also provided for running automobiles in the same streets, using the Faller car system in which the HO automobiles follow a metal guide wire buried in the road. “It might give some troubles running both trams and autos at the same time,” remarks Jon, “but at least these streets get rather lively.” 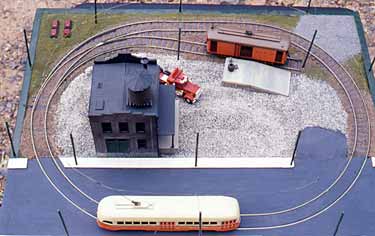 “I originally built the layout to learn the various skills needed to build a working trolley layout,” Dick comments. “Today, I use the layout as a photo prop (the scenery can be varied by changing out the buildings), as a loop to test run and work out the bugs in new cars, and most of all for fun. It has survived the construction and subsequent destruction of two large trolley layouts. I call it my ‘first and lasting’ trolley layout.

“I have operated the layout indoors, outdoors, at trolley and train shows, at PTA hobby nights at my childrens’ school, in my basement, in a friend’s living room, on a picnic table, card table, kitchen table, over two saw horses, and in a couple of dozen other places over the years.” What a testimony to the value of well-built small layouts — and to the lasting fun of traction modeling! 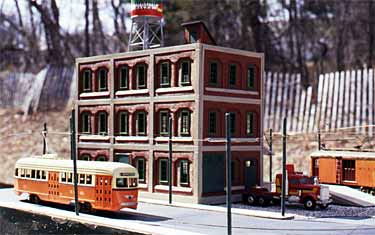 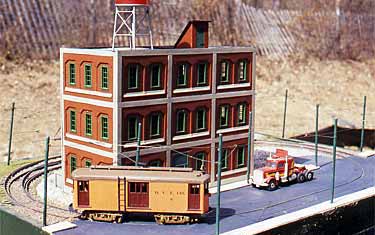