This month we’re serving an abundance of examples of the world’s most popular
layout design — the Pizza. It’s simply a circle of track that looks like it came from
a pizza box but often reveals considerable flavor in its construction and scenery. Here’s
a smorgasbord of good ideas to provide food for thought about your seasonal display layout.
Bon appétit!

LET’S START AT THE PIZZERIA! 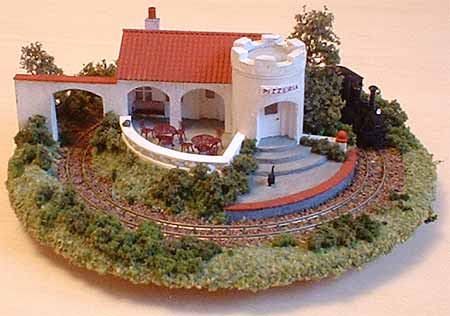 Ian Keeble, who lives on the Isle of Man, England, chose an unusual scenic setting to produce his initial effort at a micro layout. Says Ian, “While looking at one of your Pizza Panic pages my wife suggested a pizzeria-themed
pizza [layout], and my first attempt at a micro layout was set in motion. A three-inch radius
OO9 circle on an eight inch plywood disc provided the base for a small pizzeria
scene [at left].”Ian’s building reminds me of the nostalgic U.S. restaurant chain called the White Tower!


AND SPEAKING OF SCENIC LOCATIONS … 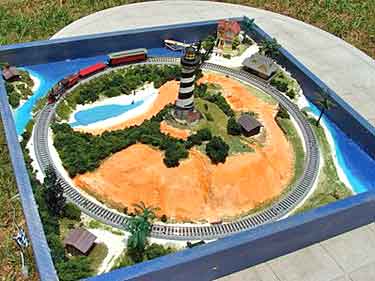 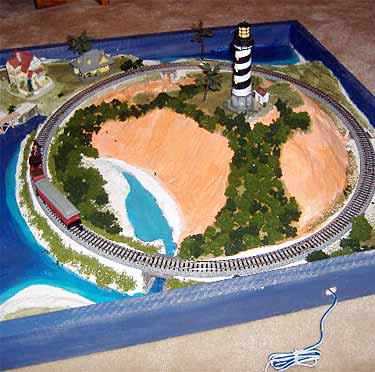 The N scale Bear Point Railroad is the creation of John Lucas, from Troy, Alabama USA. John reports, “The layout measures 2x2ft and is constructed from foam board in a plywood box. The scenery was made with joint compound
and colored with acrylic paints. It is intended to represent the clay cliffs along the bayshore near Pensacola, Florida. The water was made with gloss medium.“The lighthouse that is the centerpiece of the layout cost $1 at a local discount store. It looks good, scales out pretty closely, and the price was right! The palm trees were inexpensive models from a craft store.” You can read more about John’s layout and construction methods at the All Model Railroading Forum and The Gauge. John added, “This has been the most satisfying layout I have ever built. I was able to get it to a finished look in a short time and yet there is still much more that can be added.”

SMALLER LAYOUT IN A LARGER SCALE

It isn’t often that we get to see the evolution of a layout from one theme to another. Here’s a great example, posted by “Cody” awhile back. (Cody, if you’re reading this, please get in touch with me. I’d like to give you full credit for this interesting little layout!)

Description of the original layout, called the Potted Tree Storage Yard Railrod (below, left): “It’s 3/8n20 scale [1:32 on 16.5mm track] and a whopping 5×7 inches,” Cody explained. “The minimum radius is 2in, with the gauge slightly wider in the curves (both the Bachmann Porter and Davenport can navigate these). It’s built on a piece of red oak.”

But model railroading plans have a way of changing … and the lower right photo shows how the same layout metamorphosed into the Firewood Mound Railway. “It’s really just an excuse to have a place for my Mack to run,” said Cody. 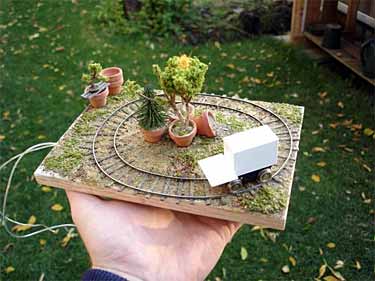 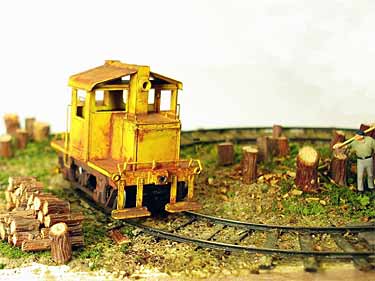 AND ANOTHER EVOLVING LAYOUT 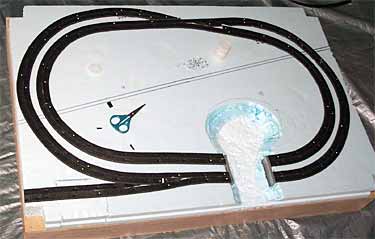 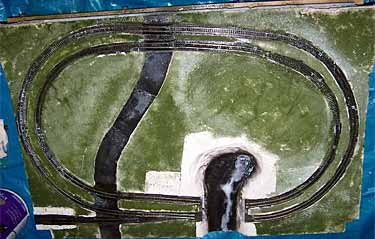 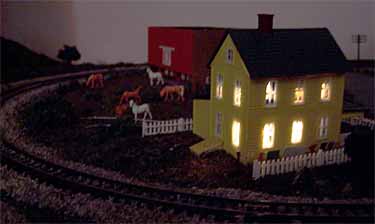 And here’s another example of an evolving layout being built by Ben Maggi. His original layout (at left) was a twice-around N-scale pizza in 3x2ft. For reasons of simplicity (and wanting to run two trains), Ben switched to a double-track pizza layout (at right) and is proceeding to install some well-detailed scenery, including lighting and sound. The illuminated farm house at right has complete interior detailing, including a scale-sized model railroad layout in the upper-story bedroom!

“I am currently working on installing building lights,” Ben reports, “and I have plans to add a station across from the farm plus completely scenic the right side with several cottages and boats and lots more trees. It is very simple, but allows me to keep my sanity in law school.” 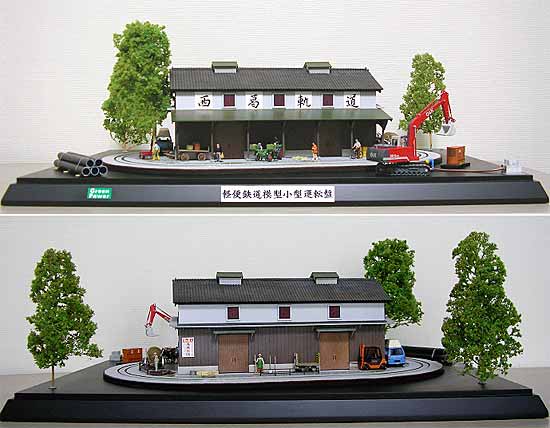 Yoji Tabuchi, from Tokyo, Japan, is a well-known builder of elegant micro layouts. He decided to create a small layout that used standard commercial parts and materials, required no woodworking or plastering, and would be easily portable in a dustproof presentation box.

His ingenious and delightful solution, Saikatsu Tramway, is shown here and in much more detail — including many more photos and a number of video clips — at his website (the site is in Japanese, but there are many photos to make the whole process easy to follow and understand. If you wish, you can get a translation from Babel Fish.) 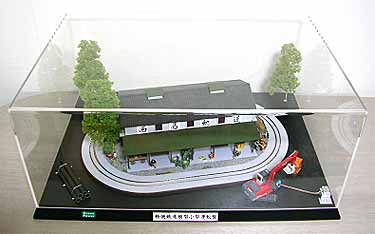 To start with, Yoji built the layout in a Tamiya display case intended to show off 1/24 scale automobile models! It measures 470x320mm (18.5×12.6in). The HOe layout (1:87 on 9mm gauge) centers around an agricultural warehouse, readily available as a commercial building model. An oval of sectional track, available embedded in a simulated concrete roadway, circles the warehouse and provides a tramway for the trains. Locomotives and rolling stock are RTR (finished models) built by Sugiyama Models of Japan.

There’s lots more to see and tell about Yoji’s ingenious use of stock parts and pieces to make Saikatsu Tramway easy to construct, but for now let’s just view some more photos of this elegant pizza layout. (When you have an opportunity, be sure also to visit Yoji’s home page, which features much of his previous small-layout work. Don’t miss his unique “human-powered railway”!) 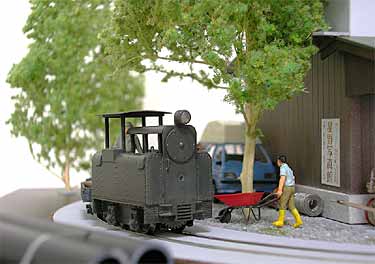 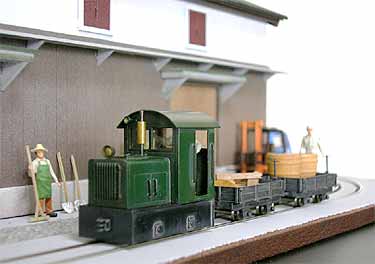 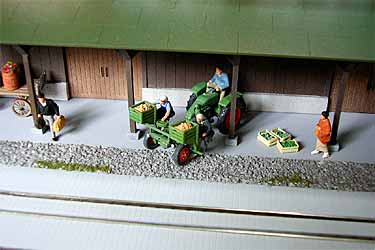 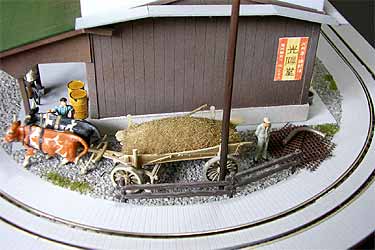 Not only does James Dowling‘s Deere Mountain Railroad loop the baseboard twice, but it can host two different scales of trains! The 450x450mm (18x18in) line is built to 9mm gauge … and James has carefully placed only natural scenery items (no man-made objects) on the board. So he can run N scale and OO9 (HOn30) trains without changing a thing! The lower right photo shows a U.S. prototype N scale train rounding the bend — but German narrow gauge trains could follow next! The total run is about 2000mm (79in – nearly seven feet!). James lives in Cardiff, Wales. 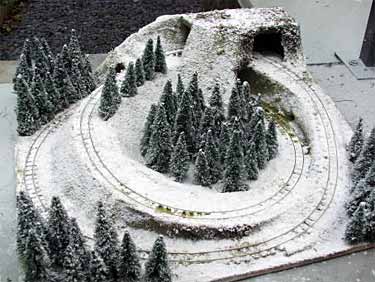 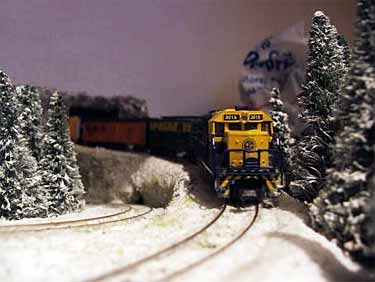 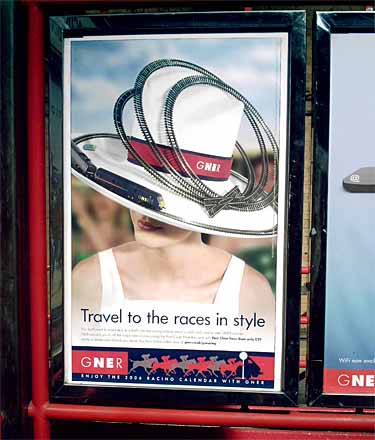 Bob Hughes, from Sandbach, Cheshire, England, spotted this travel poster on a recent trip in Britain. It advertises GNER’s rail services on the East Coast, from London up to Edinburgh via York and Newcastle.

Certainly looks like the lady is wearing a pizza layout on her hat, does it not? And a three-times-round experimental design is just waiting to be glued down! 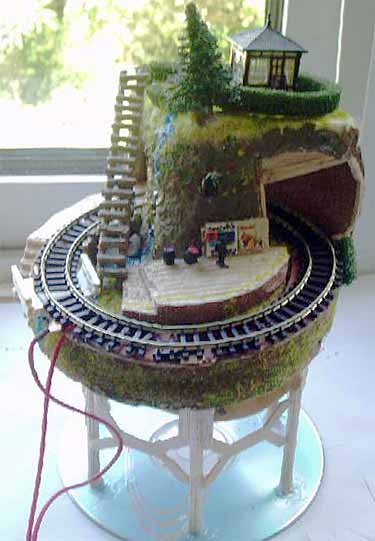 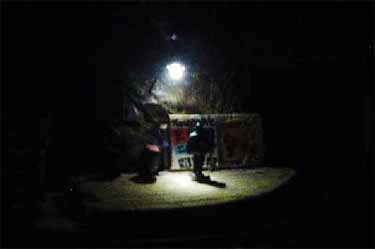 The smallest pizza on this page is this one, in N scale, made by Thomas Carpenter, from Leeds, England. It’s built on a CD disk, measuring 4-3/4in (120mm) in diameter! A loco and car circle the track tirelessly, and are aided by lighting effects. The photo above shows the station platform illuminated by lamplight in the dark — an impressive spectacle!

A DOUBLE DIP FROM DOWDY 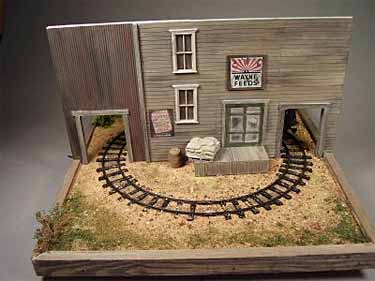 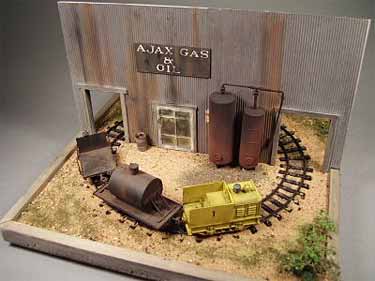 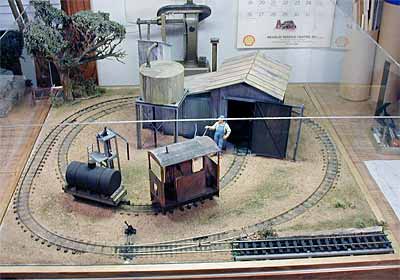 From Tad Dowdy, in Grapevine, Texas, USA, come photos of a pair of pizzas in two different scales. Above pictures show both sides of a highly portable layout in On30, measuring one foot square (30x30cm). The “building” (a double-sided backdrop) is removable for easy transport. Tad scratchbuilt the 3-ton Plymouth loco on a Bachmann 44-tonner power truck.

At right is a two-foot square (60x60cm) layout in Gn15, with spurs to an industry and a wharf. The loco is also scratchbuilt, on a Bachmann On30 mechanism.

Tad is rapidly living up to his nickname, “Rustmeister”!