“Thinking small” was not a part of American model railroading until after WW2. Before that time, layouts were large and getting larger. O (1:48) was the most common modeling scale, although HO (1:87) had been introduced and was beginning to grow in popularity.

The way things stood was summed up nicely in the first definitive model layout book published in the US, Al Kalmbach’s “Model Railroad Track and Layout” (left). Al was the original editor and publisher of Model Railroader magazine. His pioneering book, first published in 1940 and reprinted in 1948, contained 40 layout plans — and 75% of them were for O scale. All but two of the plans were continuous, round-and-round designs.

The smallest layout in the book (one of the two point-to-point plans) measured 17x2ft. This is definitely not a minimalist text, and undoubtedly it faithfully reflects the times.

But after the War, perhaps due to an acute shortage of housing space at the beginning of the Baby Boom, things started changing pretty fast! During the late Forties one inventive modeler, Bill Livingston, built what he called an “Apartment Pike,” an HO scale layout measuring just 36x42in and featuring <gasp> a point-to-point layout! 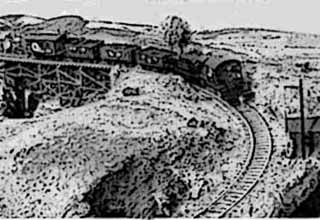 Bill’s layout was featured in the October 1950 issue of Railroad Model Craftsman (RMC) magazine from which the above illustrations are adapted. The job of this little line is to haul coal from the Mine (1) down to the coke ovens (9) at the bottom of the hill. Two locomotives are required. The railroad is set in the late 19th Century and features small trains, four-wheeled coal cars, and relatively tight curve radii — as small as 15 inches. Bill Livingston went on to build a better-known, large HO line and later pioneered On30 modeling. But that’s a story for another day.

Also designing smaller layouts (as well as writing science fiction stories) in the late Forties was Simpson M. Ritter, who worked with more conventional planning ideas. But he thought about ways to reduce the ruling radius still further. His ideas were published in the Model Railroader for April 1950. One of his plans (left) provided a basis for MR’s first project railroad a few years later.

Simpson experimented with the tracking capabilities of his rolling stock and determined that 12 inches was a reasonable minimum radius in HO. He also appreciated the need for an engine siding and industrial spurs in addition to a main line. He was attempting to design a working railroad in a very small space. That’s an excellent minimum-space approach!

The Fifties was a time of expansion on many fronts, including model railroad planning. The planners of the era, who introduced a host of new ideas and methods for having more fun with model railroads, included John Armstrong, Bill Schopp, Linn Westcott, and more. Unfortunately, John never designed a minimum-space layout, although his small 12x2ft O-scale switching pike, Pratt Street Manufacturers Ry, is a masterpiece. However, both Bill and Linn created a few very small layouts. Here are two examples.

Bill Schopp designed layouts every month for RMC under the name “The Layout Doctor.” He innovated in many ways, including designing this minimal-space layout that I traced in 1955 and have called Schopp’s Schelf. Bill was very aware of developments across the world of model railroading, and for this plan he adapted a fast-growing trend in Britain, the “terminal to fiddle yard” design. Notice that the main baseboard of this HO layout measures 1x4ft, or four square feet in area. To the best of my knowledge, this was the first published micro-layout plan in the U.S. (If anyone knows of an earlier example, please send me a copy!)

This design features a commuter terminal station, along with a small engine-service and reversing facility. The trains, once they’re made up in the terminal spurs, head off into the distance (which is a very short trip on this two-foot fiddle track!). Nowadays we would probably use a cassette instead of a length of straight track for a fiddle, but the over-all design is just as workable today as it was in 1952.

Linn Westcott, for many years editor of Model Railroader, designed one micro layout that I know about. It was called Apple Creek Junction, and it appears as Layout No. 7 in Linn’s classic plan book (still in print!), “101 Track Plans for Model Railroaders.” (1956). It measures 1x4ft in HO scale. Linn clearly intended this plan to be capable of some operations, although they are not extensive, in addition to displaying models in a realistic setting.

His comment in the book reads, “Tracks A and B must be long enough to hold the loco and at least one car. Plan shows No. 6 switches; with No. 4 switches you can shorten the railroad a few inches.” Presumably the No. 6 switches were used in case the plan would later be connected to a larger railroad.

In January 1957 Dick Andrews, a regular columnist on narrow-gauge modeling for Railroad Model Craftsman, revealed a truly remarkable layout design. It was an On2 railroad he built on a 24x18in drafting board. At the time it hit me, and many others, like a lightning bolt — a totally new concept for building a complete railraod in an extremely tiny space! Dick inspired a whole generation of modelers with this design … and his ideas are still working for many hobbyists today. 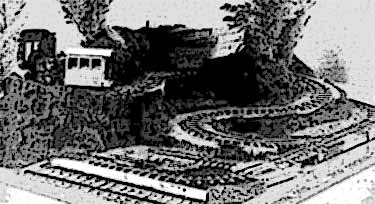 Dick’s layout concept shows a little two-footer that brings granite slabs down the hill from the quarry and slides them onto a standard-gauge flatcar at the interchange. The locomotive can very properly be at the downhill end of the train for both uphill and downhill journeys. Dick also uses a space-saving small turntable in the lower yard, to provide access to the yard storage spur. Stock consists of four-wheeled cars with simple link-and-pin couplers, all scratchbuilt. Using short-wheelbase narrow gauge rolling stock permits 3in radius curves (in 1:48 scale!), making possible a whole railroad on a drawing board. (The above left photo is adapted from RMC, Jan. 1957.)

I’ve written elsewhere (in Model Trains International magazine, issue No. 50) about my admiration for Dick Andrews’ work and for this little layout in particular. At the time, I even built a small shelf line using many of the ideas from this layout (see my North Pole Line). And years later, I gave Dick’s remarkable layout a place of prominence in the Micro Layout Design Gallery. Dick himself republished the layout with additional information in the Narrow Gauge and Short Line Gazette for May/June 1980, inspiring yet another generation of modelers to try minimum-space modeling. And we’re still at it!

In the Sixties several classic layouts were designed an built that are still inspiring small-space modelers today. It was the era when Dave Frary and Bob Hayden developed HOn30 modeling, using N-scale track with HO two-foot-gauge rolling stock to build “Down East” narrow-gauge lines (the Elk River saga appeared in RMC in 1970). And Chuck Yungkurth’s Gum Stump & Snowshoe line appeared in MR, tangentially in 1963 and then full-fledged in 1966.

Though slightly too large to be a canonical micro layout, the Gum Stump is one of the most influential very small layouts ever designed. It remains a much-copied plan even today, probably because it successfully moves in an extremely small space from Here (lower level) to There (upper level) via an interesting switchback arrangement that actually crosses over itself!

There are many examples of GS&S layouts on this site. Just enter “gum stump” in the Google search box on our Home Page, and you’ll get a slather of entries. We even devoted a whole Scrapbook issue (#38a) to Gumstumping! The layout’s only drawback, if it has one, is that it requires two locomotives to get from Here to There. Many versions of the plan put a runaround loop (passing siding) at one of the terminals to make it possible for a single loco to operate the layout.

In response to a number of inquiries: both Gum Stump and Snowshoe are real places, small towns in north-central Pennsylvania where Chuck lived at the time. He picked them because they sounded picturesque — and they still do!

In the mid-1960s another heavyweight, John Allen, introduced a minimum-space layout that became one of the most influential micro layouts ever built: The Timesaver. Described in the November 1972 issue of MR, this switching puzzle involves respotting five cars that are scattered around a specific track plan. The layout is simply a small passing siding (runaround loop) with a spur and a kickback siding from it.

For more details about the Timesaver, see Adrian Wymann’s outstanding Shunting Puzzles site. There also are Timesaver examples scattered throughout this site, including an e-mail competition to design the smallest-space version of Allen’s plan. Versions of this classic plan can be found wherever model rails gather in the U.S. John firmly established the entertainment value of minimum-space layouts!

IN THE 21ST CENTURY, INNOVATION CONTINUES

There’s something about designing minimum-space layouts that brings out a special creativity in model rails. A good example occurred in 2002, when I designed a very tiny layout (13x5in!) that would fit in a shoebox, yet would still provide railroad-like operations when it was completed. I called it Carl’s Imports (left below), and to prove it wasn’t just a weird, theoretical idea I built one — 13×7 inches in Gn15 scale (it’s Carl’s Junkyard, shown below right under construction). 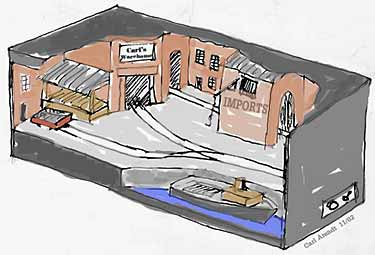 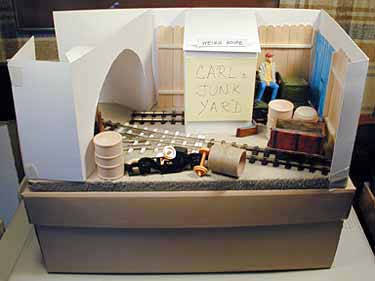 The shoebox idea picked up momentum incredibly rapidly, especially when compared with the spread of ideas in the past. Shoeboxes of incredible variety began appearing at train shows in England and France as well as in the U.S. (see “Shoebox Madness” on this site). The difference? The Internet, of course. Ideas can now be propagated around the world instantly … and good ones will tend to multiply faster than ever before. 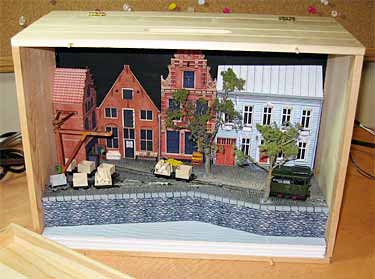 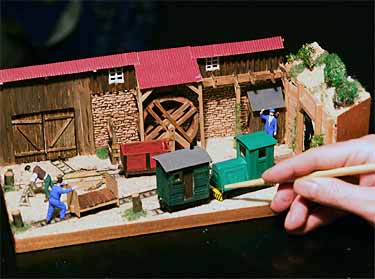 To illustrate the point, here are two very recently built shoebox layouts (above). On the left is a Dutch canal scene in HOn30 by John Hubbard, from Huntsville, Alabama, USA (a future Scrapbook will tell more about this surprising little layout that is housed in a wooden shoe box). On the right is Rittig’s Mill by Alex Lehmann, from Mannheim, Germany, an On15/O9 treat that has previously appeared in Scrapbooks 56a, 57a, and 59a. Half a world apart, both are working toward similar goals with excellent results.

Loose Translation: “Inspired by the ‘Arendtian’ shoeboxes seen at Expométrique 2003, three young GEMME members peering into the future — Benoit Evellin, Pablo Chanson and Fabien Hallier — proposed this ‘modular’ layout. The shoe with the natural patina belongs to one of the protagonists.” A Dada-like statement indeed! 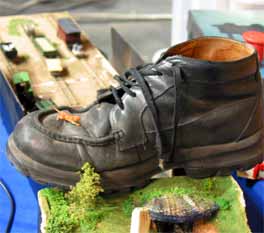 If you have any more examples of early minimum-space layouts or plans for pikes that occupy very little space and still provide railroad-like operations, please be in touch. E-mail me through the “contributions” button below. Thanks!  Carl.)