The beginning of a new year is a good time to think about all the activities of the year just past
and bring them up to date. So here’s a page of Updates from this Scrapbook — a quick look at
what’s happened to a variety of layouts and modeling projects since they last appeared
in these pages. In some cases we report additions and enlargements. In others,
we’ll see movement in whole new directions. In all cases, though,
the changes are interesting and even inspiring. Happy reading! 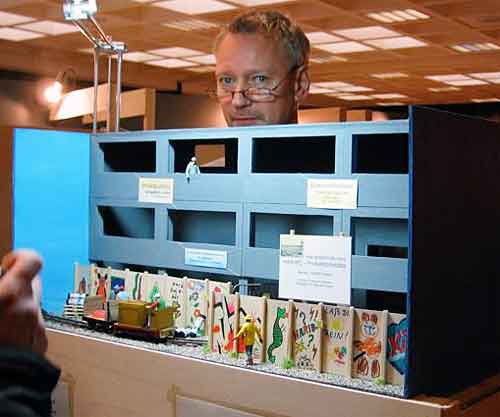 A couple years ago I proposed an audience-interactive layout, Graffiti Bros. Contruction Co., where audience members could help create the scenery. In 2007 Dr. Michael Kraemer, who lives in Gelsenkirchen, Germany, made this idea a reality and showed it at the International Model Railway Exhibition in Lahnstein.

Michael’s layout, Graffiti & Co. KG, is shown with its creator at right. The scene is a construction site with the typical fence made of graffiti-covered plywood panels surrounding the work. In this case, the audience has the opportunity to participate in decorating the layout by drawing their own graffiti on card panels that are then installed on the layout. The result is a participative experience where the layout appears in ever-changing vibrant colors, and both the visitors and the operator have a lot of fun!

Michael’s layout generated considerable attention at the exhibition and even appeared on German television. The micro layout is made primarily of balsa on a 65x29cm (26x11in) plywood base in 1f scale (1:32 running on 16.5mm gauge). It also features a synchronized sound system by Otto Schouwstra, from the Netherlands (as heard on Otto’s micro layout, Van Gelder Zonen). 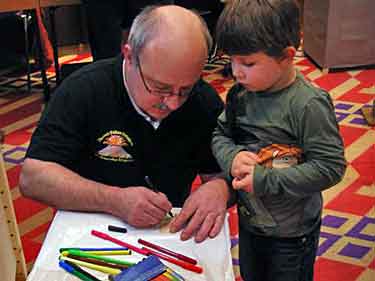 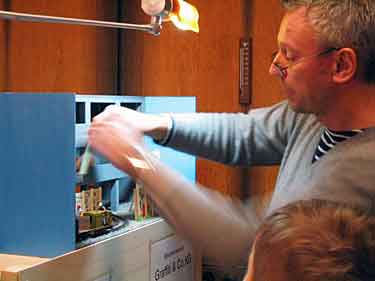 Michael explains, “It is a very simple project to show that you can build a nice layout for about 50 euros ($75 US). A special feature in this layout is that it is interactive — visitors at an exhibition can take part in the layout by painting graffiti on little card sheets (above left) which are then put in the wall (above right). The appearance of the wall (below) changes often during the exhibition. Afterward the paintings become a little present, brought by the model loco and open wagon, with appropriate sound effects.

“My idea to create this layout came while i was stuck in traffic congestion with my car in Dortmund. I was stalled beside a graffiti-painted fence for about 15 minutes, and I had a lot of time to think about how this might be a good idea in modelbuilding, to bring all the young teen-agers into our hobby.” And so it did… enthusiasts of all ages had a lot of fun with Michael and his layout at Lahnstein.

[Ed. Note: The Lahnstein exhibition also displayed several other layouts that are familiar to readers of these pages, including entries from Ronald Halma (Netherlands) and Alexander Lösch (Germany).] 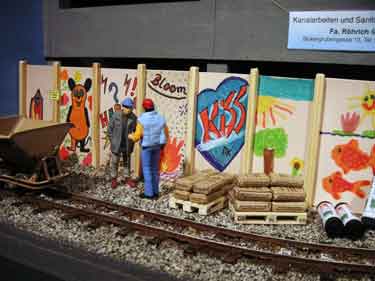 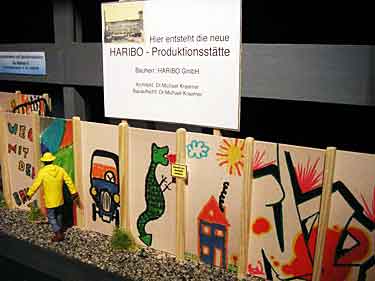 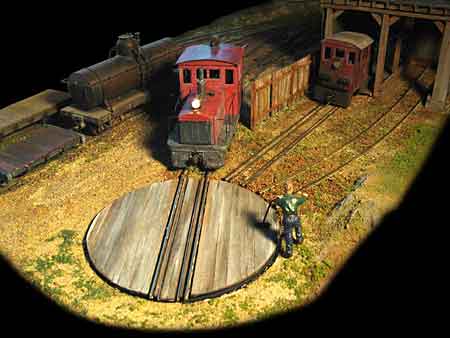 Brian Wilson’s O scale layout, Moore’s Yard, has appeared several times in these pages as its construction has proceeded. The original On30 plan is in Scrapbook #53a, the revised plan adding On18 in #55a, and more photos appear in #57 and #63a. There’s even more info on Brian’s website.

The newest addition is the decked, dual gauge turntable shown here, which he made from four-inch (10cm) drainpipe components. How did he do it? Brian’s photo FAQ, “How to Make a Small Turntable From a PVC Drain Cap and Grate,” is now available on this website (under “Articles”).

A NEW APPROACH TO ‘EMPTIES IN, LOADS OUT’

We’ve published a number of variations on the “Loads In / Empties Out” concept for paired industries, most recently Stephen Brown’s clever circular scheme in Scrapbook #66. Greg Elems, from Reno, Nevada USA, came up with another variation on this theme, shown at left. Says Greg, “I call it Sand Central with ‘SC Mining Co’ on the engine. The one that will probably get built will be the Sn42 version on a 3x6ft (91x182cm) board.

“The idea is to run four or six hoppers, half loads and half empties. The turntable isn’t for the train but for repositioning the loads/empties in the mine and manufacturing buildings. The critter switches empties into the mine and takes the loads to Acme. At Acme the empties are switched out and loads spotted inside. Then the critter takes empties to the mine to reverse the process, hence the two switches outside the mine and building.”

I couldn’t resist — I did a quick sketch of what a two track turntable would involve … it’s HOn30/H0e using Peco N Set Track. The turntable is a four-inch model (perhaps made from a CD or a PVC drain pipe cover), with two curved Set Track sections on it and holding three four-wheeled skips. In this scheme, the sidings can be used for industry switching, the turntable needs no help to exchange loads and empties.

Richard Glover’s new micro layout, Sand Point, was shown in its early construction stages in Scrapbook #66. Richard added scenery in 2007, and he forwarded some photos of how the layout appeared in mid-summer on exhibition at the Amberley Museum’s annual Rail Gala. The layout measures 105x40cm (41x16in), and Richard is a long-time member of the Greenwich and District Narrow Gauge Railway Society. We’ll keep you posted on future progress!

A FINAL VIEW OF RITTIG’S MILL – A FINE GERMAN SHOEBOX 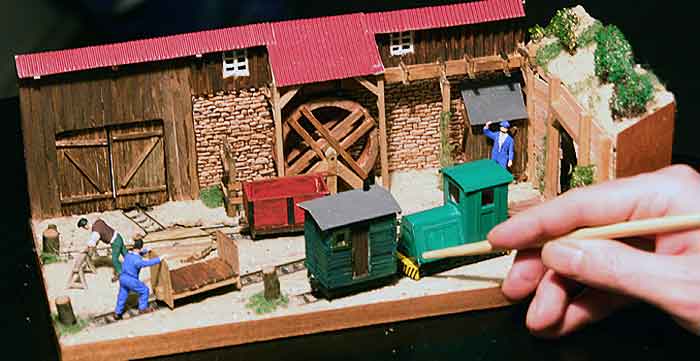 Rittigsmühle (Rittig’s Mill), built by Alex Lehmann, in Mannheim, Germany has been featured in several Scrapbook issues: its unusual folding fiddle track was shown in #56a, its mill-wheel rotation in #57a, and a photo update in #59a. This excellent shoebox layout, measuring 315x158mm (12.4×6.2in), has now been exhibited several times and is shown here in full maturity. Scale is O9 (1:45 on 9mm gauge).

The lower sequence of photos shows Owner Rittig trying his hand at pushing a load of logs past the mill wheel, onto the turntable, and into the mill. Could there be a motor concealed under that load? 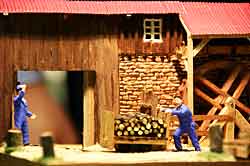 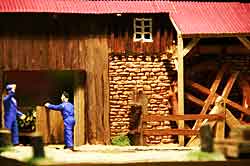 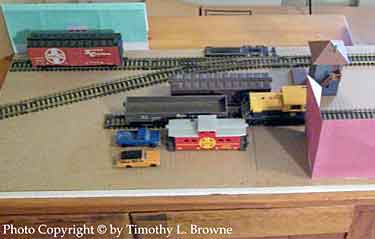 Tim Browne, from Maryland USA, is building an HO version of my On30 Peek’s Pike layout. The photos show the beginnings of this 35x11in (89x28cm) line. Note that Tim is using a computer designed and printed warehouse (background) and front wall (hiding the fiddle yard).

ANOTHER SHOEBOX APPROACHES COMPLETION… OR DOES IT?

Since its first appearance here in Scrapbook #51, Marc Miller’s shoebox layout, Brewhouse Yard, has gotten bigger! It now measures 55x29cm (21½x11¼in) and has gained more scenery and a proper fiddle yard/headshunt at the left, as well drainpipes and other details on the buildings. The layout was exhibited last September at the N Gauge Society’s 40th Anniversary in Kettering, where it received considerable attention for its small size and period setting (Summer 1905).

Hard as it is to believe, Marc has more growth plans for the little line! He reports, “Basically the layout will be deepened to make it 21½in square! There will be a bit more track, about 6in added to the short siding, a larger yard which will include a small warehouse and stables, and cutting across the right hand corner will be the one form of period transport not yet modelled: a canal. There will also be some Victorian houses beside the tramway overpass. All of this will require lots of ladies and gents in period costume — enough to keep me busy for the foreseeable future!” Marc lives in Tyne & Wear, England. 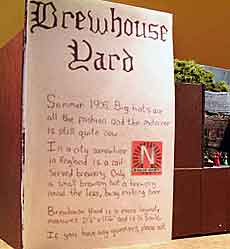 Hot on the heels of an article in Scrapbook #67 about his OO passenger terminal layout, Sutton Road, Bob Hughes has sent photos of an N scale version, Tweedsmuir Street! The purpose of both layouts is to simulate operation of a bustling urban passenger terminal, serving full-length trains and modeled in an impossibly small area. Tweedsmuir Street actually fits under an arm, including the stock box!

The “trick” of course is to model just the end of the terminal, allowing only enough room for two full-length passenger cars between the overbridge and the end of the tracks. The cars can appear and disappear from under the bridge, where a backstage fiddle yard allows manual rearrangement of the consists. The coaches look like the ends of full-length trains — and even an occasional locomotive can appear, to spear a lone car and drag it offstage. A typical operating sequence is outlined in the Sutton Road article in #67.

Bob points out, “The N scale version is operated pretty much the same as the OO, but the only uncoupling needed is for the loco-hauled arrivals on platform 3 (the one nearest the viewer) which does not enter the trainshed. Trains on platforms 1 and 2 are either push and pull sets, multiple unit railcars or loco hauled departures where only the rear two coaches are seen.

“Tweedsmuir Street is ultra portable, the locos and coaches fit into a cardboard box which is, in turn, a tight fit inside the fiddle yard area. The controller and extension lead travel in a canvas bag over the shoulder with the layout under my arm leaving the other arm free for opening doors and such.” Bob lives in Sandbach, Cheshire, UK and is a prolific layout builder, often represented in these pages. Tweedsmuir Street will be on display at the Cheshire Railway Modellers Exhibition at The Railway Age, Crewe, on January 27. 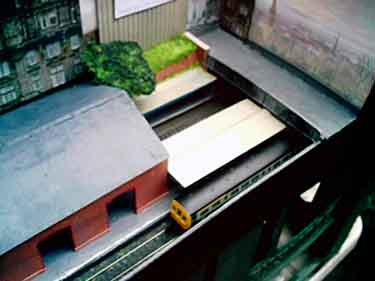 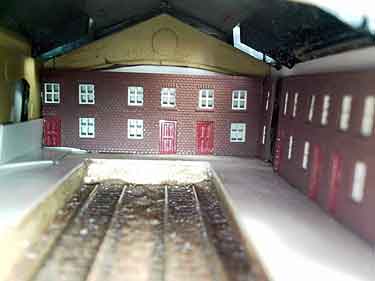 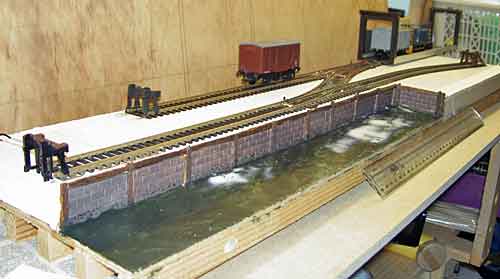 We have several excellent layouts to add to Scrapbook #65a, “Two Turnouts for Top Ops.” The first (at right) is Plankerton, being built by Martin Hogg, from Mansfield, England. This “quickie” plan on a shelf is OO scale (16.5mm gauge). Martin reveals, “There’s no shunting puzzle, movements are generated using a simple grid and a 20-sided die. I use five wagons and four ‘spots’ to place them. Rolling for each move generates enough interest for a little gentle shunting of an evening.” Fiddle yard is a Peco Loco Lift (lower right), partly off the layout to save space.

Wood Lane, a two-turnout, 4x1ft (120x30cm) OO layout, is being built by Simon Moore, from Burnley, Lancashire, England. It’s modeled on the plan for Andrew Smith’s Maldon Market Hill, from Scrapbook #59a.

Simon says, “It is my first ever layout. It’s DCC and has working lights and points and also some scratch built buildings as well as kits. It was originally to be based in Yorkshire in the 1980s, but i decided it should be a 1960s diesel line. I’m still buying locos so they’re a bit short.” 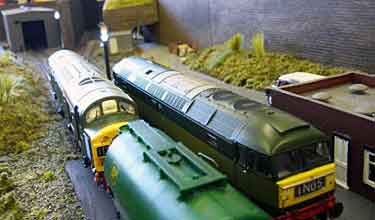 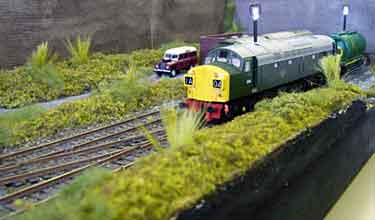 TWO TURNOUTS APPEAR ‘DOWN UNDER’ TOO! 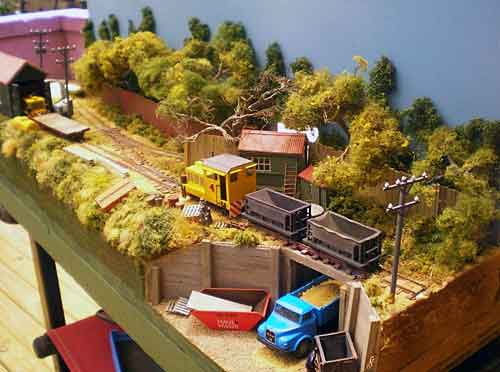 Says Pete: “The trains appear through the hole in the backboard (behind the yard office and small storage shed), run forward behind the engine shed at the other end of the layout, then push back down to the unloading trestle, where local gravel trucks wait to be loaded…

“Everything is scratch-built or kit-bashed, and all trees are handmade. Even the locos were built by a guy in Queensland, and are based on reliable 6-wheel diesel shunters.” The result: a hard-working and convincing model railway. 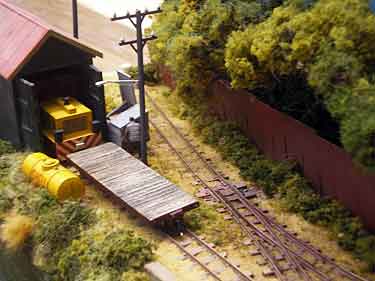 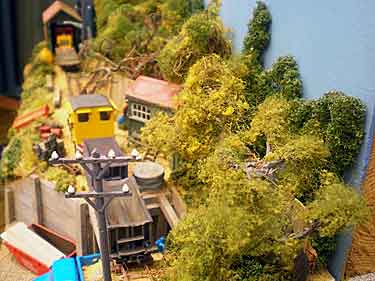