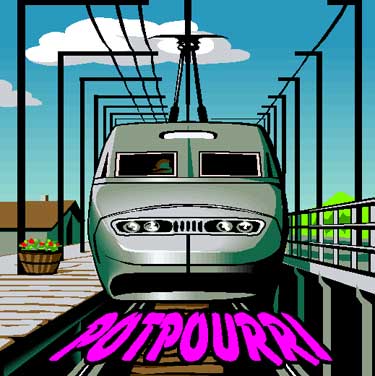 News and photos about small layouts come barrelling into our offices seven days a week via e-mail. Not all of them fit neatly in the categories we use for our semi-monthly Scrapbook pages!

But we certainly don’t want to leave anybody out, nor miss reporting a single good idea. So every once in awhile, we publish a page of “miscellaneous” small layouts … items we feel our readers will want to see, but that haven’t quite fit into any of the themes of our recent Scrapbook editions.

So here’s a collection of good layout ideas, ranging from Take-Away Layouts (that you can take with you wherever you go), to Fork Layouts (based on the classic Fork design), and even a couple Trolley or Tram Layouts… and more! They’re fittingly called a “Potpourri”, and we hope you’ll enjoy them!

TRAINS THAT CAN RUN WHERE? ON THE TRAINS! 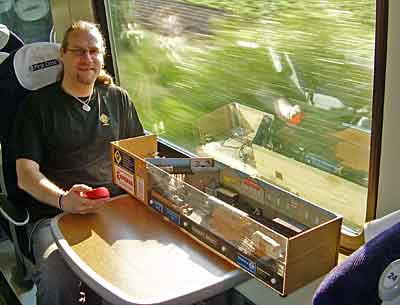 Barber’s Bridge is a classic small layout design in the Inglenook pattern. In fact, it’s featured in Adrian Wymann’s excellent Shunting Puzzles site: “Rail Express Magazine featured Tony Wood’s minimum-space layout Barber’s Bridge in its January 2000 issue… The scenic section of this diesel fuelling point measures only 22x8in (55x20cm), with an additional 14in (35cm) of hidden track allowing for movement of the locos onto the three short sidings. The layout was built within a few weeks at a cost of just £20.”

Alan Monk, from London, England, now exhibits the layout. The photo (left) shows Alan en route by train to an exhibition earlier this month. As many UK trains now provide power sockets, Alan took advantage of the opportunity to enjoy some relaxing operation!

CARTOON RAILWAY TAKES TO THE SKIES

The celebrated railway cartoons of Rowland Emett were the inspiration for this tiny pizza layout by Chris Brown, from Bury St. Edmunds, England. Chris took it with him to a Toronto exhibition of Emettiana at New Year’s 2000/1, and managed to get in an operating session at 37,000 feet (center photo below) which he claims is an altitude record for runnning model trains.

Chris describes his little layout as, “An engine, three coaches, station and folly, all in eight inches across.” Scale is indeterminate. Chris also has one of the best sites about Emett’s work… well worth a visit. If anyone else has built a small layout based on Emett’s eccentric and delightful drawings, I’d like to know about it (e-mail link at bottom of page). 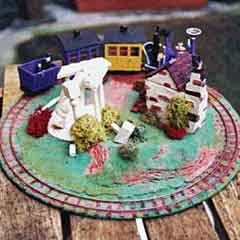 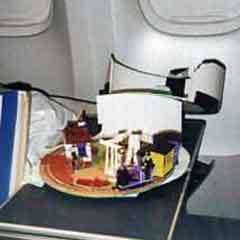 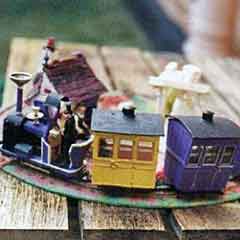 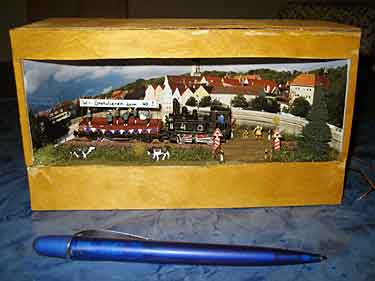 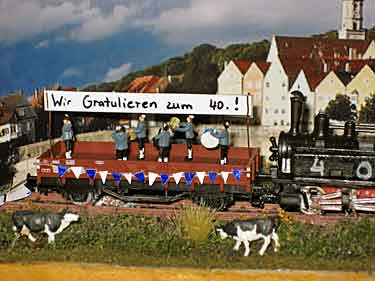 Christian Danziger, from Kaufering, Germany, built this tiny N-scale diorama to present at a party for a friend’s 40th birthday. The layout measures 20x8cm (8x3in) and 10cm high (4in). It depicts a scene in the honoree’s hometown of Landsberg am Lech in Bavaria, near Munich. Construction took about four hours, and only the railroad car and figures were purchased. LED lights are built into the display box, and the German band plays appropriate Bavarian music for the occasion!

I don’t normally feature static dioramas in these pages, but I thought you’d like to see this one as an example of the kind of small layout that can improve many a ceremonial event. Your challenge, should you choose to accept it, is to design/build an operating railway model in the same space!

WHAT TO DO ABOUT THE ELECTRICAL POWER 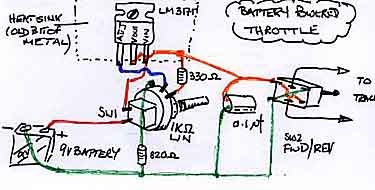 How about the electrical end of these Take-Away Layouts? Well, there are two kinds: with power outlets and without. If power outlets are available, a good choice is this Ultra Simple Cab (read “Idiot-Proof”) by Wayne Roderick from the Teton Short Line. Shortliner Jack Trollope, from the Scottish Highlands, has built this throttle (left) in both a PVC tube and a racing-car pistol grip. “You can hand to punters at exhibitions without them being able to vary the speed – also good for Timesavers as the speed is fixed. Very good it is too! I frequently use it as a switching throttle,” says Jack.

With no electric outlets, battery power is needed. Jack’s diagram (above right) shows a very simple self-contained throttle for use with a 9V battery. Full instructions are here (by Freudenreich Feinwerktechnik). It also fits nicely in a PVC tube and allows speed adjustment.

THE QUEUE STARTS HERE FOR THE CHOCOLATE MINE! 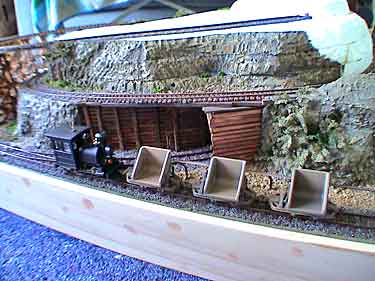 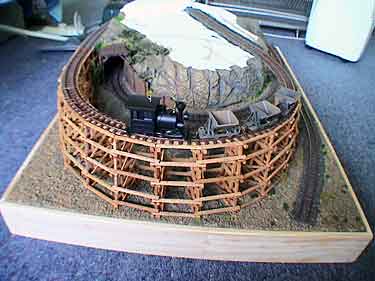 Murray McKenzie, from Wellington, New Zealand, is building a “very sweet” On30 layout using the tried-and-true Fork layout pattern (below left). Dimensions of Chocolate Mine are 100x70cm (39×27.5in), and rolling stock comprises a Bachmann Porter 0-4-0 and three V-dump cars.

Murray explains, “There will be a ‘Chocolate Mine’ at the very top (yet to be built), which will load sweets into the V-dump cars. The Train automatically reverses back down to the start, the points change (Tortoise driving Peco points), and the train proceeds to the right side of the layout where the contents are dumped into a waiting child’s hand.”

The locomotive is always at the downhill end of the train, the prototypically correct position. Automatic tipping is accomplished by a short wire finger protruding from each tip to slide on a trackside ramp (below right) that guides it upward to tip the load. Murray has also provided a spectacular wooden trestle on the route. I can hardly wait to see (and smell) the Chocolate Mine! 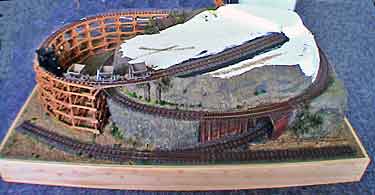 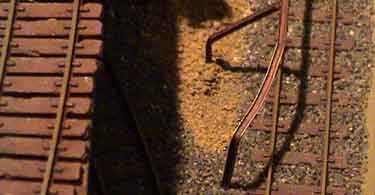 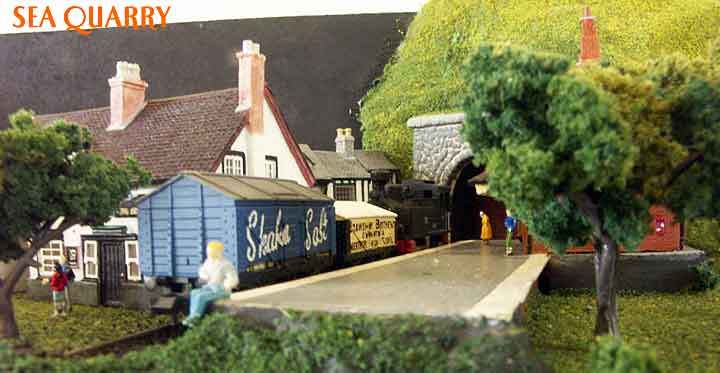 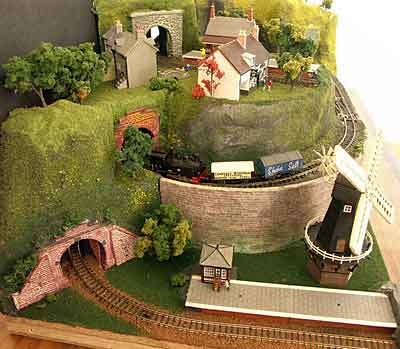 Also from New Zealand, Jonathan Scott, who lives in Hamilton, has created a deceptively simple-looking “rabbit warren” N-scale layout in just 20x13in (51x33cm). “The plan is for a small train to run between the bottom station and either the quarry or the top station,” Jonathan explains. “The track is an end-to-end design, so the train must reverse at each station. This is facilitated by block detectors and a P684SV train controller… I believe a layout is enhanced if it is not obvious where the train will reappear after it dives into a tunnel. The Sea Quarry line achieves this with unexpectedly-tight turns inside.”

Radii are about 6in (15cm) which is tight for N and limits stock to 4-wheeled wagons and short locos. The Fork track pattern lets the train reverse underneath the hill and fool the observer’s expectations about its reappearance! For more details, see Jonathan’s website. 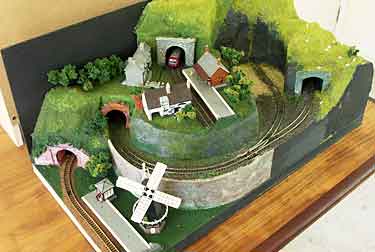 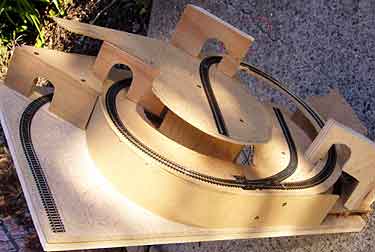 THIS LAYOUT IS SIMPLY A LOCOMOTIVE TERMINAL 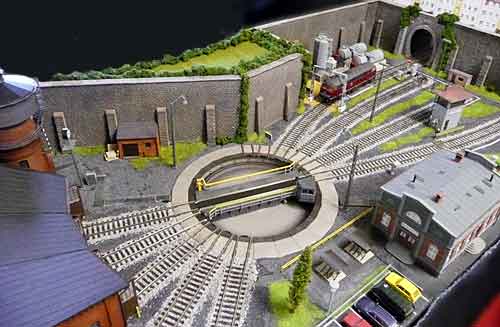 Englishman Simon Parkinson called our attention to this unusual HO layout. “It is called Dügelshaven and is set on the old East/West German border,” reports Simon. “It is a small Bahnbetriebswerk (depot) for diesel locomotives and uses a small Fleischmann turntable. It has no points [turnouts] and is powered from the turntable and uses Peco code 100 track. The main board is 4x2ft with a two-foot fiddle yard, and the whole thing fits in a VW Polo car. The roundhouse and water tower are Kibri kits. The builder of the layout, Doug Tompkins,from Torquay, England, is a member of the German Railway Society.”
(Photo by Simon Parkinson.) 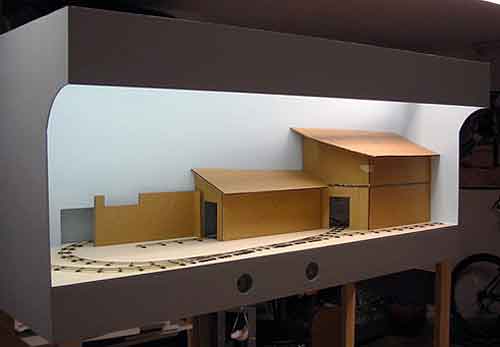 Alexander Lösch, from Elfershausen, Germany, has begun work on a new Gn15 layout called Bärwurz & Co., a liquor distillery. Alexander is familiar to regular readers from his Gn15 paper-mill layout, F. Huber & Sohn, in Scrapbooks #54 and #57. He is also a prize-winner in the recent Trackmobile Micro Layout Design Contest.

Tracklaying is complete on the new layout (top photo), and Alexander has installed cardboard mockups of the main buildings (lower photo). For more photos and details, see his website. 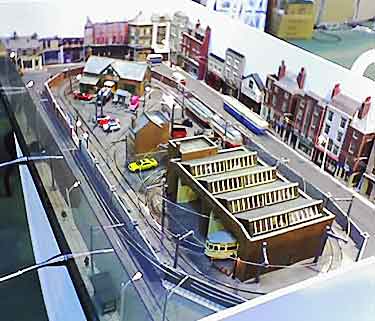 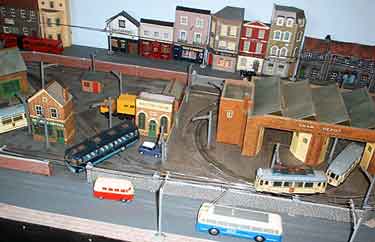 The U.K.’s Brian Wild says of his new layout, “Childhood Dream is a small, tram based layout (basically 3 by 2 feet) using Hamo trams, track and overhead; Eheim/Brawa working trolleybusses; and some of the Faller AMS slot based vehicle system. It is meant to depict a typical UK inner city where a heritage museum is being used as a basis for local regenetration, having taken over an old industrial site.”

Virtually all the material on the layout is at least 40 years old, part of the builder’s collection of classic tram rolling stock. The title? “I always wanted these items as a child, but they were far too expensive for me then. It is only following retirement that I have been able to slowly acquire these lovely items and create this small working layout to show them off.” 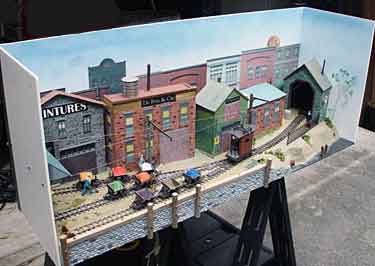 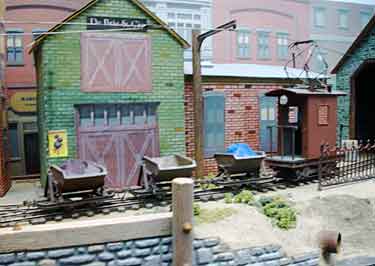 The tramway is a 4x1ft (120x30cm) Inglenook with a 5-3-3 capacity. It uses overhead wire, just as its 500mm gauge prototypes operated in Europe. The lokey is scratchbuilt on a Bachmann On30 trolley mechanism. Scenery is drawn from the Internet and printed on Richard’s inkjet printer, a la Peek’s Pike. The little trains serve the transport needs of a dye works, DeBrie et Cie., similar to Footer’s Dye Works, so each car has a bright, distinctively colored load to help identify it during Inglenook games.