In Scrapbook #93, we took a look at some good, operating shelf layouts that were shorter than four feet (120cm) long. They returned us, after a dizzy detour during the December holidays, into “serious” layouts that operate like real railroads and look good as well. This time we’ll explore some excellent shelf layouts that are longer than four feet… but still can be considered “small layouts.” Sit back and enjoy these interesting, ingenious, and inspiring projects by modelers from around the world!


4¾ft/1.45m: A LONDON TERMINAL IN AN UNBELIEVABLY SMALL SPACE 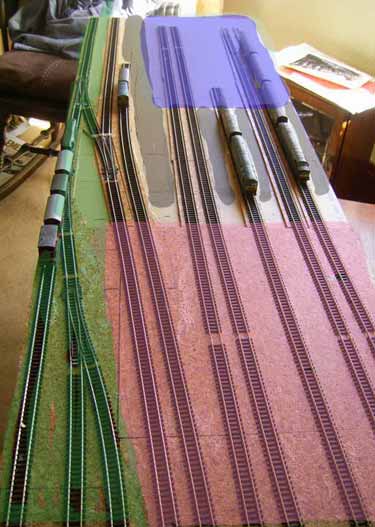 “When I worked out that to model my local (small town through station) I’d need a layout something like 12x3ft at least (in N scale), I took the logical way out and decided to model a main line London terminus instead!” That’s how Allen Walker, from Scunthorpe, England, introduced his new project, Prince’s Cross, measuring 57x15in (145x38cm). “My inspirations were the King’s Pancreas plan and the two little layouts, Sutton Road and Tweedsmuir Street. I have taken the concept of the last two layouts a bit farther to include more platforms, and a small Inglenook-style yard alongside to handle parcels and newspaper traffic.”

The schematic track plan (above) and the early-construction photo (left) show the concept of the layout. “In the photo, the curved station roof will be positioned about in the pale blue shaded area; the grey shadings are the platforms; the green shading is a (visible) Inglenook-style shunting area (the left side of the station is mainly for parcels traffic). The red shaded area is the hidden fiddle yard.” Like the layouts that inspired it, Prince’s Cross is based on a simple but very effective illusion.

How the Illusion Works
Allen mocked up a typical departing train to illustrate how our eyes can be fooled into thinking that a three-coach train is actually 10 or more coaches long!

He explains the three photos at left: “The train starts partially hidden under the trainshed (top), then pulls out. As the loco dissapears under the bridge into the fiddleyard (middle), the end of the train is still within the trainshed, and we (I hope) are fooled into thinking that it’s a 10 coach train. Finally (bottom) the end of the train emerges and dissapears under the bridge [into the fiddle yard].”

The fiddle yard was originally planned as just a collection of spurs, but Allen is now working on the idea of using cassettes to speed up operations and ease the job of the operator. The cassettes would also permit use of station switch engines to draw off the emptied coaches from the platforms, replacing them at a departure platform and allowing the road locomotive to escape for servicing (offstage in the fiddle yard).

We hope to keep you posted on this ambitious little layout as construction progresses.

Haston Nomad is a five-foot-long, HO-scale shelf layout constructed and now exhibited by Chris Gilbert, from the West Midlands of England. It’s one of two layouts on this page inspired by Pastor Tony Maude’s P4 finescale layout, Candy Mill (see Scrapbooks #33 and #39). Chris’s layout represents the end of a long spur from a Wisconsin & Southern RR branch line between Saukville and Kiel. Haston Nomad serves a small but important grain elevator owned by Premier Gold Grain. For a taste of the intense operations possible on this well-designed shelf layout, take a look at Chris’s video (below). Click on the forward arrow to get started. 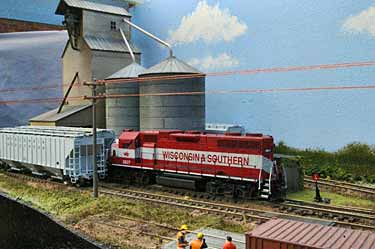 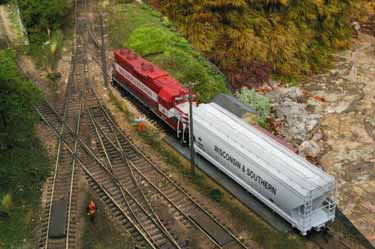 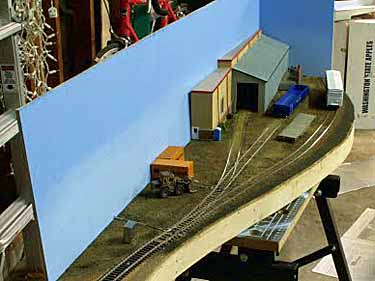 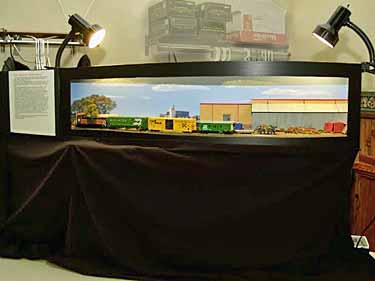 Wingett’s Recycling started out as an old plank that Ian Holmes ran across at his garage in Princeton, Minnesota USA. It was 5ft long and 12in (30cm) deep at its widest point, and it had a nice S-curve already cut along the front. “That looks like a perfect baseboard for a model railway,” Ian thought. And so it was (top left).

Ian decided to try an experiment: he would attempt to build an entire layout on this plank in seven days, recording his adventures along the way in a blog. But as it turned out… well, we’ll let you read Ian’s entertaining tale of the layout’s construction at his “7 Day Model Railroad” site. Suffice it to say, the result (top right) is now on the exhibition circuit in Minnesota.

The setting for the H0 layout is a rail-served recycling yard for railroad equipment that is past its prime. The prototype yard, in nearby St. Cloud, had been on Ian’s “must model” list for some time; and the payoff came when he exhibited Wingett’s Recycling (not the name of the prototype) at a train show in St. Cloud, and several local folks immediately recognized the original!

Operation is simple… a loco from the nearby mainline railway pushes a cut of cars (lower left) into the spur serving Wingett’s, and returns light to the offstage fiddle yard (at the left). A tiny Trackmobile (lower right) then emerges from the recycling building and shuffles the cars one by one into the facility. An amazing variety of rolling stock appears during a typical operating session, and of course never repeats itself! 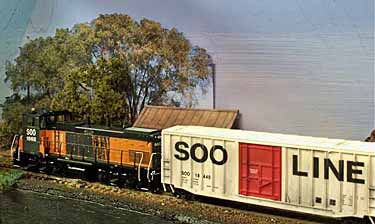 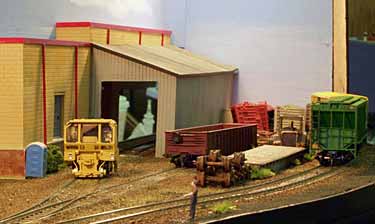 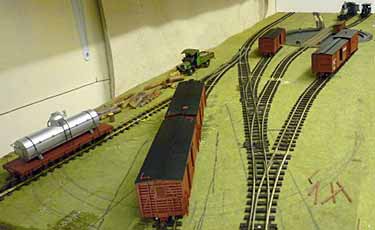 It all started with a 40-year-old Triang-12 turntable. Andrew Smith, from Chelmsford, Essex, England, pulled it from the cupboard, cleaned it up, added a new motor and rails, and decided to make it the focus for a new O-16.5/On30 layout. Taking his cue from Carl Arendt’s Shortline Terminal plan, Andrew designed a basic terminal and yard of a few decades back in the U.S. Searching for a name, he ran across the website of yet another Minnesota institution, the End-o-Line Railroad Park and Museum. Perfect prototype, thought Andrew, “as the place has had so many businesses over the years I thought I could get away with running any kind of stock with the locos.” Construction of Endoline is currently underway.

6ft/1.82m: THIS ADAPTATION TURNS MINORIES INTO A HARBOUR LINE

Over the years, Alan Cox, from Swansea, Wales, has designed several variations on Cyril Freezer’s classic Minories layout. Here’s his latest: Minories Marine, a 1x6ft (0.30×1.82m) N-scale shelf that combines the time-tested Minories terminal pattern “with the Piano Line idea of putting the fiddle yard behind ‘live’ parts of the layout.” The result is a busy, very workable waterside terminal arrangement that caters to both passenger and goods (freight) traffic. As drawn the line uses Fleischmann Profi track, but Alan suggests “it would look better with some gently curving pointwork I imagine.” Note the track at right, curving back through the warehouse backdrop so wagons can be trundled on- and off-scene in the docks area. 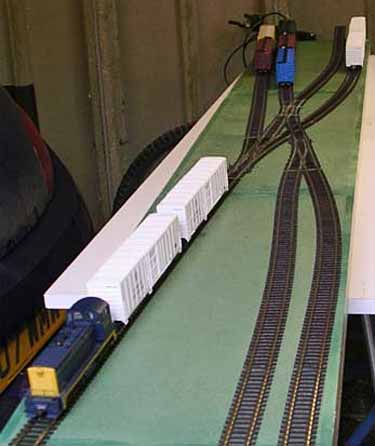 When work stalled on his planned exhibition layout, Shortliner Jack Trollope’s thoughts turned to Candy Mill, a finescale layout by Pastor Tony Maude, who also lives in Scotland. Like his friend, Chris Gilbert (story above), Jack is an admirer of the CMR. In fact, he had earlier spliced together two Peco Setrack turnouts (lower right) to create the nested switch needed (and had even showed it to Tony at an earlier exhibition). So he set to work on the H0-scale C and D Mills Railroad (a modest play on the CMR name), with the results shown here in progress.

Built on three 25in (63.5cm) baseboard modules, the layout measures 75x11in (190x28cm). All the turnouts and crossings (left below) are on the center module. The interlaced turnout, Jack explains “is literally a pair of left hand Setrack turnouts cut apart, slotted back together, rejoined and soldered. It looks like a double-slip, but isn’t! (A double-slip would give you the option of running through it on the straight track alignment in two directions; my interlaced version forces you to use it in an Inglenook style configuration, as it only has one direction of straight track alignment.) The space saving is considerable—a pair of toe-to-toe Setracks would be 13.5in (34.3cm), while this is just 7in (17.8cm).” 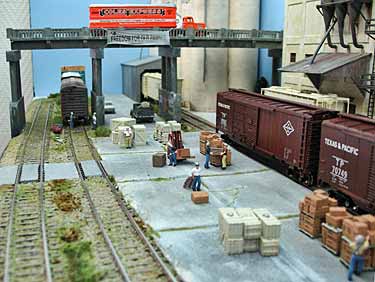 Edouard Kowalski, who lives in Brest, France, named his American switching layout Tirawahat to honor the supreme being of the Pawnee Native Americans who lived in the area being modeled. The H0 layout measures 2.4×0.40m (7.9×1.3ft) and is digitally controlled. Edouard says the scene is “located somewhere between Texas and Oklahoma.”

The fiddle yard (at the right) will be a cassette measuring 0.80m (31.5iln), and Edouard is currently deciding between using a structure or a highway overpass to hide the opening. He also comments that, though there are only four turnouts, they’re enough to provide several hours of switching fun! 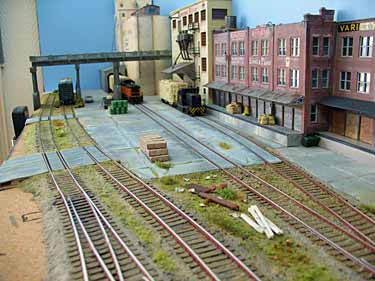 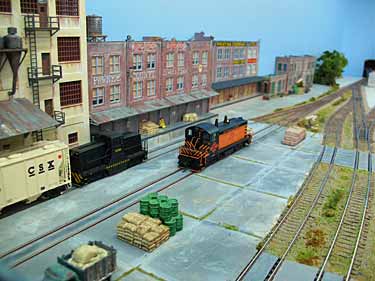 Some months it feels like virtually no railroaders except Americans are modeling the trains of their own countries! Here’s another excellent model of a “foreign” railway scene, this time by Tim Hale, from Dorset, England. The H0 layout is Schotterwerk West, and portrays a gravel crushing plant somewhere in Germany. Prototype inspiration came from here. The layout measures 2.4×0.60m (7.9×2.0ft). 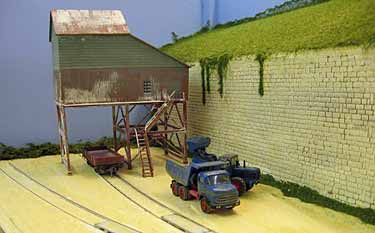 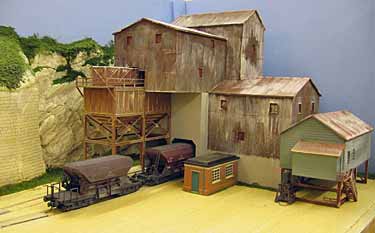 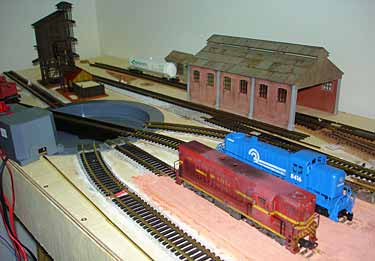 Roberto Falorni is Italian but currently lives and works in Brazil. In the interest of getting as much operation as possible into a small space, he has designed and is building an H0-scale combination Inglenook-Timesaver layout that fits in a 2.7×0.60m (8.9x2ft) space. Roberto’s version is slightly different from many similar combo layouts because he has added a small engine servicing and storage facility.

The over-all track plan is above, and the two smaller drawings below show the configuration for the Timesaver (left) and the Inglenook (right). Roberto lives in São José dos Campos, Brasil (near São Paulo). 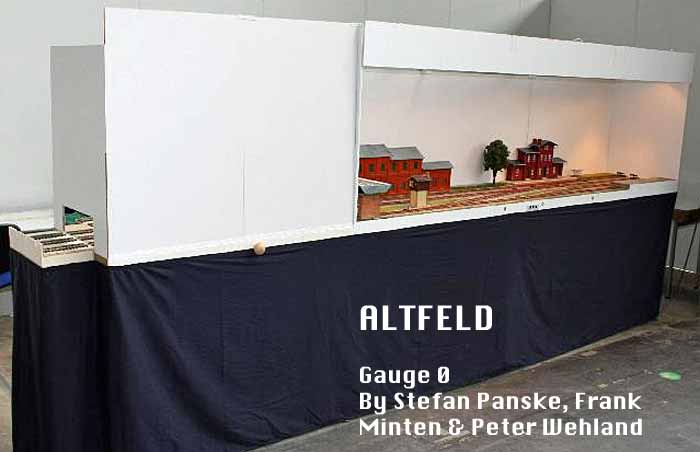 Late in March 2009, the German 0-scale club, Spur-0-MEC Niederrhein e.V.. received an invitation to show a layout at an exhibition in June. Despite the short lead time, the club decided to have a go. One problem: there was no room at the clubhouse to build a layout! Stefan Panske, from Rheinberg, Germany, volunteered his basement provided he could keep the layout there and operate it between exhibitions. A deal was made.

They designed the layout to minimize space requirements, not only to respect Stefan’s basement but also to fit in his car (see plan below). The whole thing fits (almost) on four modules. And although at 4.2×0.60m (13.8x2ft) it is slightly larger than our usual “small layout” size limits, I feel it’s designed in the small-layout spirit and of course, is 0 scale standard gauge! Work started on building portable modules in April.

Stefan recounts at a delightful German-language forum the hair-raising suspense of attempting to build an O-scale exhibition layout in roughly two months. To make a long story short it all came down, as usual, to the last two days. 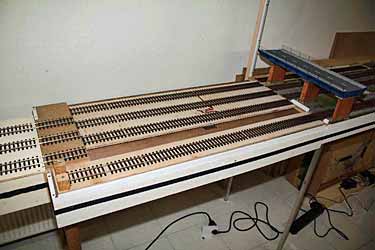 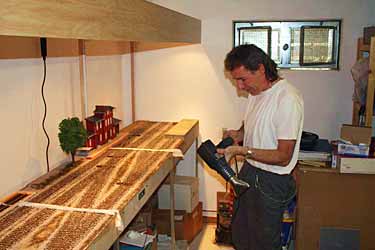 Three men did most of the labor in those last 48 hours—Stefan Panske, who provided the basement, installed the lighting, and took the photographs; Frank Minten, who did most of the landscaping (shown above right working on ballast and ground cover); and Peter Wehland, who came off a sick bed to build the structures, especially the factory (below left). Additional help was provided by Hans-Jörg Grädener and Heiner Thomas.

It was two days of long hours, little sleep, and unfortunate incidents like the night they discovered that two of the modules had by accident been glued together! But all problems overcome, they loaded the car on the third day, reached the exhibition and successfully set up the layout (top photo and below right), which operated perfectly. It now happily resides in Stefan’s basement, where detailing can occur at will. 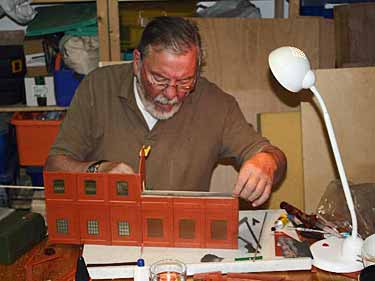 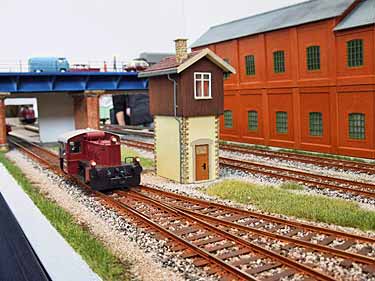