In the late 1950’s Chuck Yungkurth, who then lived in northern Pennsylvania, designed and built this small shelf layout called the Gum Stump & Snowshoe Railroad. The pike was written up in Model Railroader magazine early in the Sixties, and its intriguing switchback (zig-zag) design made it an immediate popular favorite. It has remained one of the most popular small layouts ever designed. The GS&S was listed among the elite “Classic Small Railroad” designs in Small Layout Scrapbook #4. In recent years, with the rise in popularity of good small layout designs, increasing numbers of modelers have rediscovered Chuck’s plan and built modern versions of it. Here are some of the variations we’ve seen recently based on this classic design. They illustrate both the wide variety possible with a good basic design, and they show some of the improvements that can make the GS&S an even-better layout for operating. WE’LL BEGIN WITH A SCOTTISH VERSION About four years ago, Des Norman, from Scotland, built a U.S. style version of the Gum Stump & Snowshoe on a 7.5×1 ft (228×30 cm) shelf. He kept the layout almost exactly as Chuck had it. For stock he used oldtime 36 ft cars and a Roundhouse four-wheeled logging caboose, with two-truck geared locos — 2 Heislers, 2 Shays and sometimes a Climax — available. 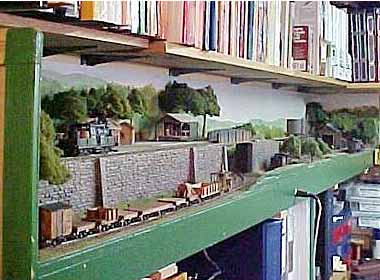 Des reports the layout “generated a lot of interest both from enthusiasts and general visitors because of the peculiar [to Britons] locos, because the design had a train disappearing under the bridge and suddenly reappearing at the intermediate level, and because of the small cameo scenes I added. At home it is a pleasant way to spend an hour running through the switching sequence twice.” [Photography by Emrys Hopkins] 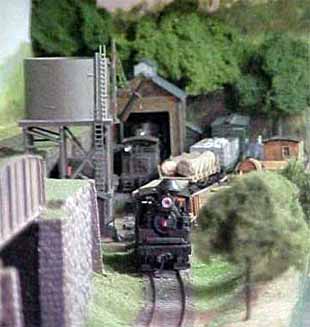 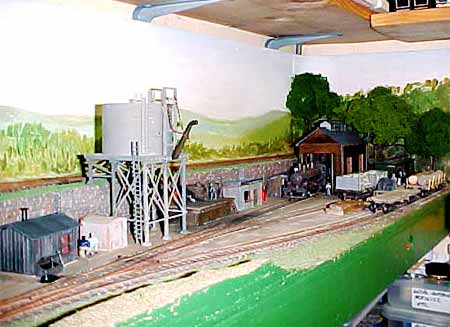 AND A LARGER VERSION FROM AN AMERICAN CLUB LAYOUT

At this year’s Fullerton Railroad Days, in California USA, the Orange County Module Railroders’ large layout included modules featuring — in addition to the standard double track main line — a branch line version of the Gum Stump! Luckily, Jeff Hartmann, from Long Beach, California, was at the show to snap photos for this web site. This modular version of the GS&S appears to be about 8 ft (2400 mm) long, and the Californians have included a passing siding (loop) at the lower terminus — a popular option that improves operating flexibility. 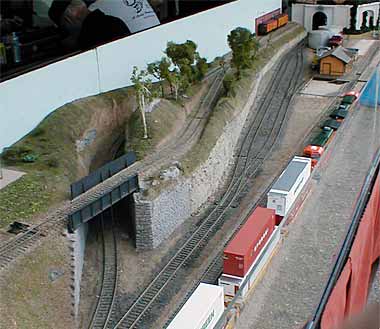 A SIMILAR PLAN ORIGINATES IN GERMANY Also opting for a passing siding at the lower terminus is Alexander Kaczmarek, who lives in Berlin and is building a German prototype version of the Gum Stump track plan. The layout measures 180×43 cm (71 x 17 in) and uses Märklin HO track. Short switching locomotives haul four-wheeled cars up the steep grades. Alexander’s work was featured in Small Layout Scrapbook #25, and more photos of the completed line can be seen there. The photo at the left below was taken at an early construction stage, in order to show the track plan clearly. 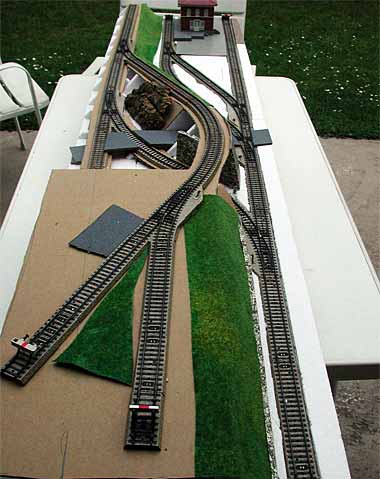 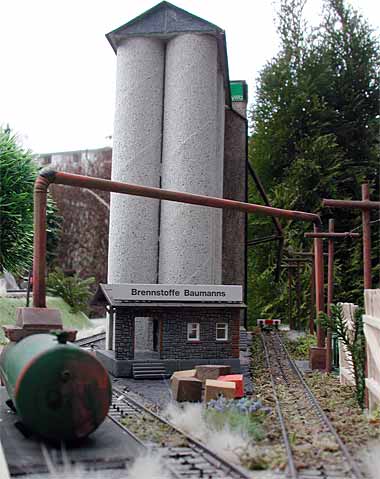 NEXT, HERE’S A SHOEBOX VERSION, ALSO FROM GERMANY

An ingenious variation on the GS&S theme comes from Alexander Lehmann, in Mannheim, Germany. He set out to design the smallest possible version of the Gum Stump & Snowshoe, and he ended up with a shoebox layout by cutting the baseboard of the shoebox (36×25 cm) lengthwise in two halves to produce a joined baseboard of 72×12.5 cm. The two halves ride side by side in the shoebox during transport. Key to the design are two sector tables (shown in green on the plan). A hidden 3D sector table at the right is capable of swinging from side to side as well as rising up from the lower level to the upper; and a curved sector table hidden at the left swings from one lower-level track to the other. Follow the train routing for a minute, and you’ll see that Alexander has captured the exact operation of the Gum Stump, but in an extremely tiny space! You’ll need to use small 0-4-0 locos with this layout, and short, four-wheeled stock. (There’s more information on 3D sector plates elsewhere on this site.) ANOTHER GERMAN PROTOTYPE ZIG-ZAG, MADE IN SPAIN 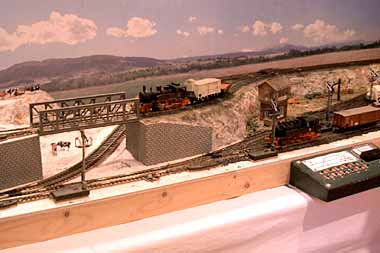 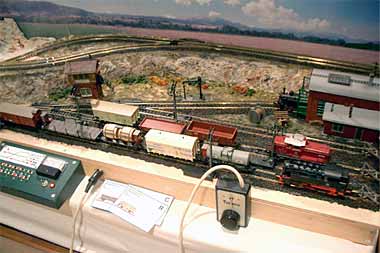 Ignacio O’Callaghan, who lives in Barcelona, Spain, has built another GS&S version using German prototype models. He has developed a card and waybill system for operating the road. The three sidings in the lower terminus provide an opportunity to play Inglenook switching games on this layout as well. A lot of fun is packed into a six-foot railroad! Ignacio’s work was featured in the Small Layout Scrapbook #30, and many more photographs can be seen there. 10-FOOT DISPLAY LAYOUT FEATURES THE GS&S PLAN

The largest of our “small” Gum-Stump-inspired layouts was built by Jim Sacco, from Pittsburgh, USA, who is the proprieter of City Classics HO building kits. Jim designed and built the layout to display his line of kits, and incorporated the Gum Stump & Snowshoe pattern because it “added some operation to what is essentially a simple loop.” Actually, it adds a lot of operation! The 10×3 ft (300×90 cm) layout is built on two custom-made mirror-image baseboards that travel in Jim’s car to train shows around the country. Unusually for a switchback layout, the line operates in an urban switching district rather than in a rural or industrial park setting. Ironically, Jim produced the track plan independently and did not know about the GS&S when he designed it! Only after viewers kept remarking about the “Gum Post and Horseshoe” design did Jim look up the layout in one of the Kalmbach books of plans. The photos here were taken at the Amherst Railway Society’s Hobby Show in Springfield Massachusetts in January 2005. Jim is constantly adding new details, and the much-enhanced layout will be on display at the NMRA’s huge National Train Show in Cincinnati in early July. 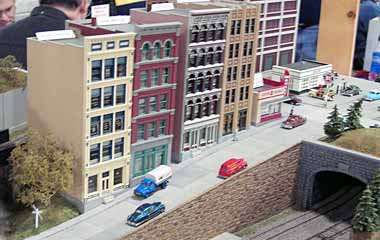 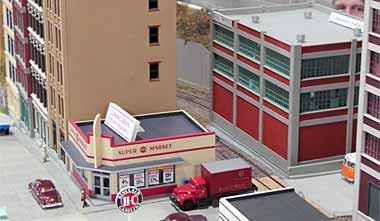 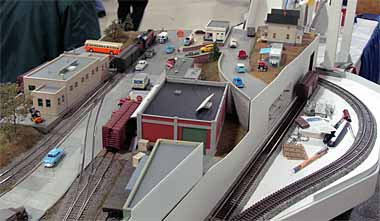 Editor’s Note: At least two other variations on the Gum Stump plan are posted elsewhere on the Net. Eric Hansmann’s HO Vandalia Short Line adds runaround loops at each end of the switchback. Geren Mortensen’s The Little Layout (under “Small”) includes a continuous circuit underneath the switchback in a 3×8 ft (90×240 cm) On30 design. Anyone have another link we should add?

HAVING FUN WITH REAL-LIFE SWITCHBACKS!

A couple weeks ago, I spent a delightful weekend at Cass, WV … home of the Cass Scenic Railroad, a logging line operated with geared locos that features switchback operations as it struggles up Bald Mountain in the woods. I had the good fortune to experience a genuine operating event at Switchback #2, shown here in a series of photos. I include them to encourage modelers to try this form of layout design … it has a great deal to offer, as the many variations of the GS&S demonstrate! For more information about switchbacks and their operations, see Bo Justusson’s terrific site, Zig-Zag Railways.

(Above left) Heading downhill from the summit of Bald Mountain, our train on the Cass Scenic Railway was double-headed by a Shay, #2, and a Heisler, #6, both geared locos capable of speeding along at 9 mph max. Here they’re both blowing steam to aid the siphoning action of taking on water from a mountain stream beside the tracks. (Above right) Shortly afterwards, the Heisler uncoupled (it’s not needed on the downhill trip) and laid over at a convenient wye spur to let the train pass by. The switchback is not far ahead of us. 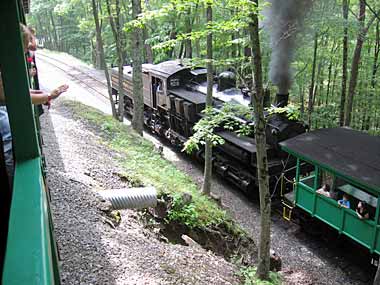 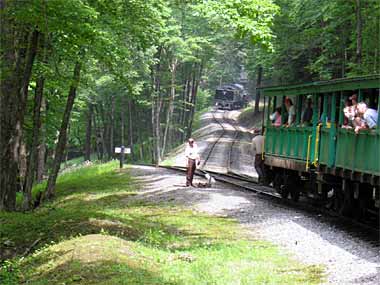 (Above left) Our train halts just ahead of the switch for Switchback #2. We wait for about 10 minutes, until Shay #6 pulls into view, pulling another train uphill on the switchback track. This is the only place on the railroad where the loco will not be at the downhill end of the train, pushing the consist to the top. The #6 train will pull deep into the long switchback tail track, and our train will follow. The track is long enough to hold both trains. (Above right) Then the brakeman “bends the iron”, and our train can proceed down the hill. The grade reaches 11% just below this point. Notice that the Heisler has followed us down the mountain and is waiting above us for its turn to pass the switch, after we proceed. 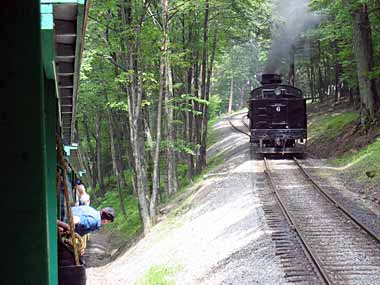 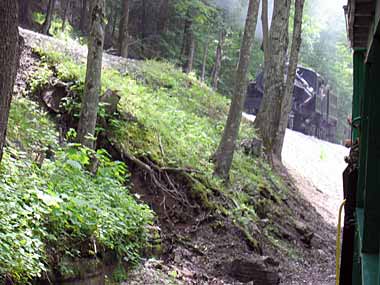 These last two photos show the Heisler following our train down into the switchback tail track, as we proceed down the mountain and back to Cass. Once the Heisler has followed, the uphill train will continue on its journey with the Shay pushing from the rear, completing the three-way meet. Moral: Switchbacks can be fun! (All Cass photos by Carl Arendt. For more info and a track plan about Cass, see my “Secrets of Designing Micro Layouts” article.)