Model railroad layouts, even very small ones, are moving targets.
Everyone who’s ever built a layout probably has experienced the multitude of ways that an original design can change during the course of construction. Here are some updates of progress on models previously reported here. We can all learn from the changes! 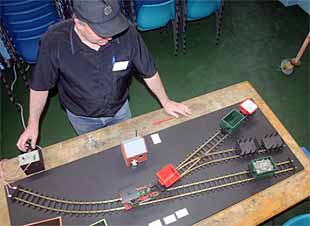 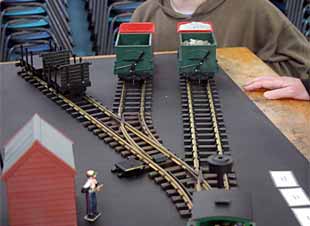 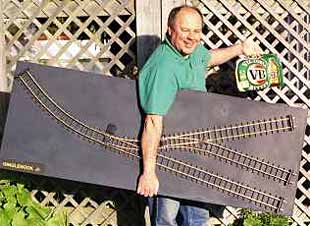 Gavin Sowry, from near Wellington, New Zealand, found an old 16mm [5/8in] board, cut it to size, sprayed it matte black, attached G-gauge sectional track to it. and voilà! another Ginglenook Jr. layout was born! After a couple private club showings, Gavin took the layout for its first public display a couple weeks ago, at the New Zealand Association of Model Railway Clubs meet (two photos above).

The reception was enthusiastic! On the first day, only about 12% of the visitors actually solved the puzzle — primarily because Gavin set a 10-minute limit in order to allow more people to have a go. Note that this version of the Inglenook game is cut down to just six cars on the layout and requires making up a four-car train in the order chosen. It’s a simpler puzzle than the full Inglenook and thus is particularly suitable for exhibition use.

In the third picture Gavin demonstrates the portability of the layout as well as the need for balance and equilibrium in effective transport, symbolized by the six-pack in his other hand! If you have built a Ginglenook layout, I’d like to hear from you — especially if you have photos.

AN EFFECTIVE SHOEBOX PROJECT IN TT 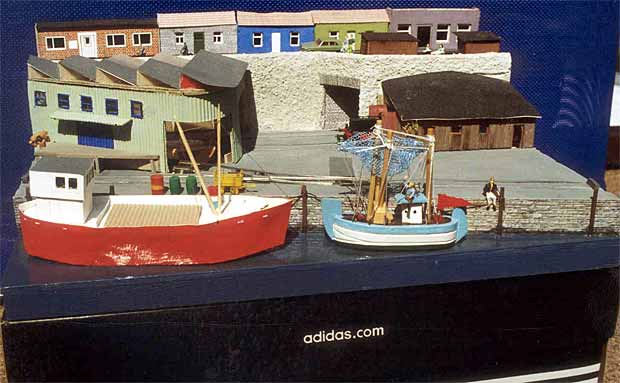 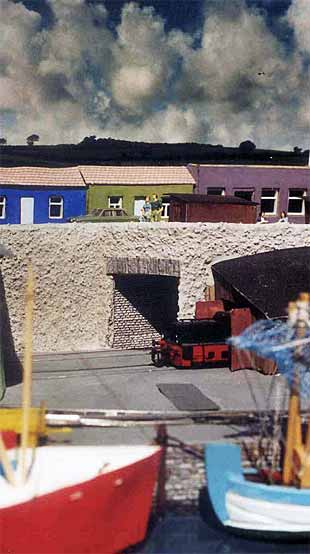 Since January, we’ve been following the progress of Alexander Lehmann, from Mannheim, Germany, who was inspired by this web site to build a shoebox layout in TT scale. He has now pretty much put on the finishing touches, detailing this delightful harbor scene, and has exhibited the layout publicly. Shoebox layouts are a considerable novelty at German exhibitions, and Alex received a lot of attention for his display — along with a challenge to produce an even smaller layout for next year!Alex has learned a lot in the process of putting together this very small layout. You can also see some progress shots during construction in the March 2005 Scrapbook. At first Alex was concerned that he was stuffing too much trackage into a tiny space, but careful choice of scenery makes the balance look very good indeed! Having the harbor in the foreground  puts the railroad into context effectively and frames the action well.

One of Alex’s experiments is shown at the right. He used a photo taken on vacation in Ireland to provide a dramatic backdrop for the little layout. The result is a striking vignette — total width of the shot in the foreground is about 3in [76mm]! It’s amazing how much railroading can be had in a shoebox using TT scale! 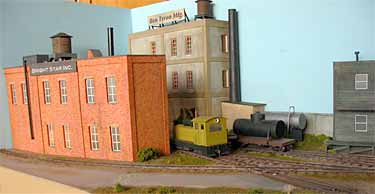 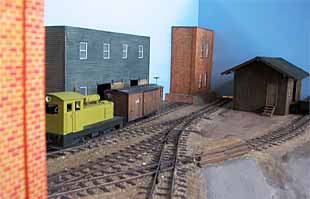 We’ve been following progress of Daniel Schläfli‘s On30 47th Street Yard layout since February 2004. His neat hand-laid trackwork has now been joined by some carefully planned structures — in both full 3-D and low-relief models against the back wall. Daniel’s layout measures 48x20in [120x50cm] and is a variation on Jack Trollope’s classic Box Street Yard design. A traverser [transfer table] is concealed at the left rear of the layout (hidden by the brick warehouse). Daniel lives in Switzerland and has promised to keep us posted on future developments. Nice free-flowing track. eh?!

A PAIR OF NORWEGIAN DEVELOPMENTS 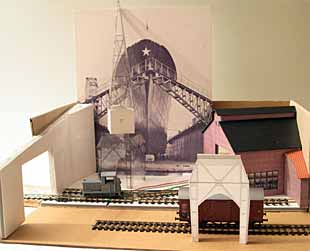 Barbu Wharf started out as a 23x17in [58×42.5cm] shipyard layout running between two buildings and backed by a giant mural of a ship’s prow. Somewhere along the way it became an OO9/OO dual-gauge shoebox layout, retaining the mural. Jon Songøygard, from Arendal, Norway, sent along this update showing scenic progress including a ship’s crane. The standard gauge line is in the foreground.

Below is a report of progress on the Moose Pizza, a circular layout he’s building in the unusual scale of 3:100 (or 1:33.3). Notice Jon’s first locomotive model under construction. Follow Jon’s progress on both lines at his web site. 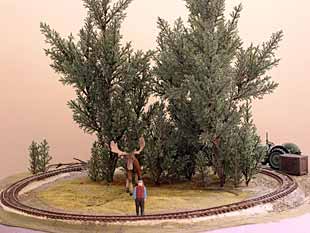 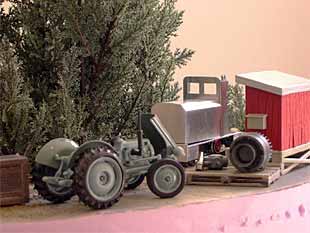 Chuck Perrucci, from Perkasie, Pennsylvania USA, followed up on our Tymesavers report this month by sending photos of his HO scale 33.5x12in Less Than Four Square Foot Timesaver. The original design, by Emrys Hopkins, is in the Micro Layout Design Gallery.Chuck wisely sticks to 36-foot two-bay hoppers for his switching chores, getting more action in less space, and he uses a Roundhouse EMD Model 40 four-wheel diesel switcher. Something we can all learn from Chuck’s experience: he crafted his sector plate from an Atlas single track plate-girder bridge — it’s sturdy and reliable — and believable enough to leave out in plain sight!