What is being depicted on this layout?

This small piece of real estate represents the “backlot” of a large country estate, where the stylish, sylvan charm of the estate meets the working world of earning a living–in this case, by selling sand and gravel quarried on the estate. A little 15″ gauge railway, the SFER, hauls the stuff from crusher to transfer point.

What scale and gauge is this?

This is G scale, 1:22.5, the same as LGB meter-gauge trains. Gauge is 16.5mm modeling the Minimum Gauge of 15″, often used for estate railroads both in England and the U.S., as well as for industrial and construction lines. The minimum radius used on this industrial-style layout is 6 inches, which scales out to about 12 feet–very prototypical.

Why such a small layout?

The SFER is an exploration of the smallest possible size for a working model railroad in a large scale. It occupies only 11×14 inches–a total of 139 square inches including the Backstage area. Less than one square foot!

Are these commercial models?

The locomotive and cars are either “from the box” or kitbashed versions of commercial models by Sidelines Models in England. This range can be viewed or purchased online at Pepper7 .

To explore more on the SFER… 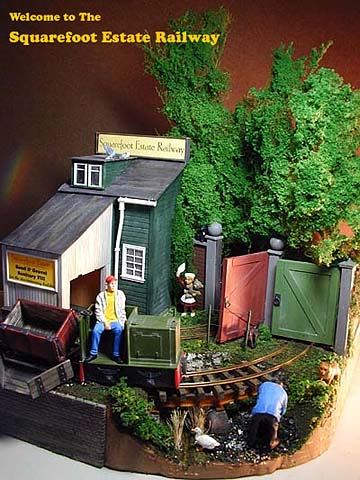 Construction was easy and fun

Rolling stock on the SFER

How are the cars loaded and unloaded?

What else can you do with this layout?