Many of the best items in this Scrapbook come under
the heading of Works in Progress when we first publish them. Later, more
finished work and new ideas enter and need to be reported. Here are a few recent examples!
(Note: We’re using “Old Business” as in Robert’s Rules of Order, i.e. “Items Previously Considered”.) 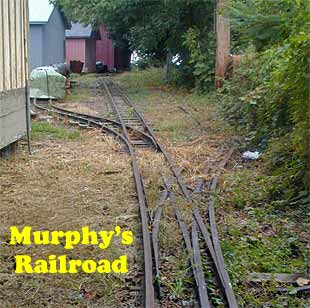 In several past pages (#1 and #6) we’ve highlighted a “Mystery Micro” — a 12in gauge micro layout called Murphy’s Railroad located in Burton, Ohio USA. Sited in a charming restored 19th Century village, the little road also has some dual gauge trackage with the second rail spaced at 7.5in gauge (see dual-gauge turnout at left).

The mystery has revolved around the road’s primary operator and his fabled (but not yet seen) steam locomotive. Well, we’ve finally tracked him down! Turns out that the builder, operator, and chief locomotive driver is Howard Murphy, who lives in nearby Warren, Ohio.

We met Howard a couple weeks ago at Railfest 2006, held in Kirtland, Ohio by the NMRA’s Mid-Central Region Division 5. He very kindly brought his scrapbook of photos for us to see, and we borrowed a couple of the historical shots to give you an update on this delightful little steam railway that is truly a real-life micro layout! Below is a shot of Howard in the 1980s, driving his 12-inch gauge 4-4-0 steamer across Trestle #2 and hauling a load of enthusiastic young people the length of Murphy’s RR. 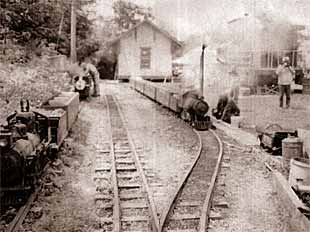 Howard built the line in 1973 with some help from his friends at the Lake Shore Live Steamers club, headquartered in Kirtland. At the right is a shot taken in the 1980s showing three steamers at work on this tiny micro layout! The setting is the passenger loading platform adjacent to the restored B&O railway station (at rear, seen from the opposite direction to the title photo above).

Alas, however, Howard reports that time and change have finally caught up with Murphy’s RR … and the steam teakettles have now been replaced by a safer but less romantic diesel engine! The shot below shows Howard last year, still very much in the driver’s seat, preparing to take yet another car full of enthusiastic youngsters on a trip down the line, but this time behind a new yellow diesel locomotive. I’m happy to report that Howard also has a loop of 12-inch gauge track on his property in Warren, and he still runs his four live steam locos there. Keep ’em rolling, railroad man!

Anthony Bilton, from Sheffield, England, is putting the finishing touches on his East & R. Egg Cement Co. Ltd layout that’s built in a chocolate Easter egg box. He began last year about this time, and we reported his initial progress in page #44. Track plan and operating patterns were covered there.Now Anthony has completed the scenery for the layout, shown in these photos. He describes the scene this way, “I have placed low relief warehouses at either end of the layout to hide the box structure and enhance the frame effect. These are both simple gable ends with large doors. The one on the left of the layout is the entrance to the coal drop into the furnaces and boilers, whilst the one on the right is the outlet from the warehouse for bagged cement.

“The larger building represents a portion of the factory where the stone is dried and made into cement. There is a lean-to structure under which wagons arrive and are tippled into the factory. The back of the factory and box are open to allow access to the wagons in the lean-to for removal and replacement with empties.”

Inspired by this website to try his hand at making a small layout, Anthony commented, “This small project has been great fun, and since I haven’t modelled for over 20 years was a good way of reminding myself of the pitfalls, trials, tribulations and enjoyment to be had.” 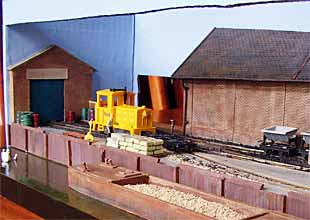 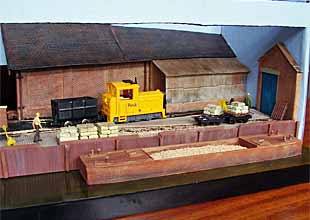 A QUARTET OF ‘FINISHING TOUCHES’ 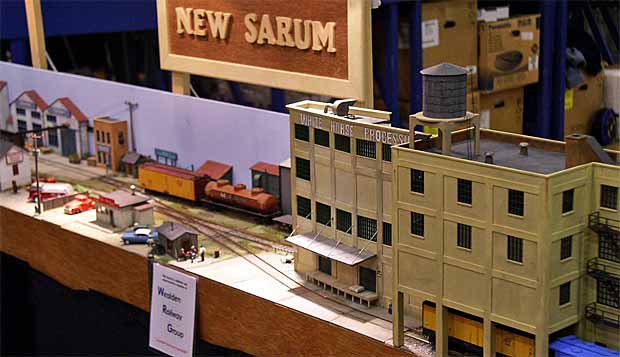 Another take on Box Street Yard is this excellent HO scenic shelf called New Sarum, by John Bruce. Based on the Box Street plan, it shows how the same track plan looks completely different with alternative scenery. These photos were shot at the recent Kidderminster show in England, by Nick Palette — himself a talented modeler who has done his own version of Box Street Yard. 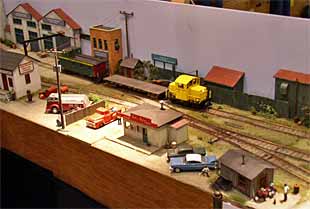 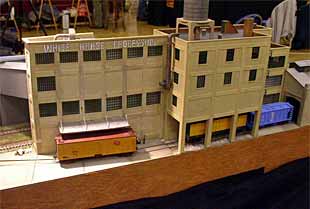 ANOTHER APPROACH TO LOCO LIFT CASSETTES

Elsewhere on this site, I describe at length the process of building an On30 layout that I call Peek’s Pike. One key element of PP is the use of a Peco Loco Lift as a cassette to hold, switch and reverse the little On30 trains in the fiddle area. In Scrapbook #45a we explored a workaround for the fact that the OO/HO Loco Lift isn’t quite tall enough to clear the larger On30 or Gn15 rolling stock. My Procrustean solution was simply to cut off the protruding whistle mounted on the Porter’s cabin roof; another solution, from Ian Holmes, was to lengthen the legs of the arches, making the opening high enough to clear all the stock.

An even simpler solution for On30 is suggested by Bob Hughes, from Sandbach, Cheshire England. “The lift can have minor surgery to clear the whistle on a Bachmann Porter. This minor surgery is not so drastic as Ian’s and does not compromise the integrity of the arch section. The top bar is cut away and filed smooth then reinforced with a lollipop stick as shown in the two pictures. The reinforcement is just ‘belt and braces’ as the arch is not noticably weakened by the alteration.” You can check out Bob’s website here. 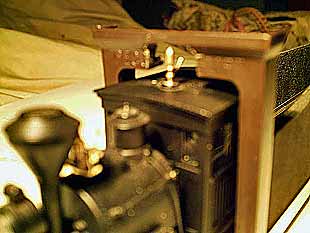 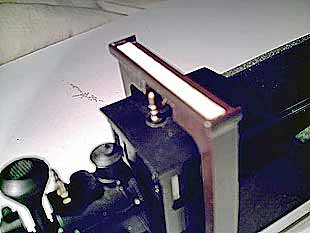 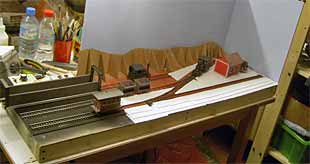 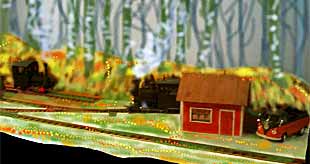 Speaking of Peek’s Pike, another On30 variation is a-building by Martin Hogg, from Mansfield, England. He reports: “I’ve made a start. I spun the track layout around but otherwise it’s unaltered. My idea is a setting somewhere on a mountainside.. in the woods in autumn … silver birch trees (my favourite) and a little line with rusty little locos pulling rusty little skips. I figured possibly a switchback with a shack. The imaginary scene (above right) portrays one part of a runaround, where the locos come down (or up) the mountain, rest and run around their little train before continuing.. always on the downhill end. Other trips could bring workers, supplies, etc.”

And still on the subject of Peek’s Pike Revisited, I was asked whether the same layout could be built in G scale and how large the resulting pike would be. At right is the answer — a 72x18in (180x45cm) shelf using standard Aristo-Craft trackage. The Loco Lift trick won’t work in 45mm gauge, so a traverser fiddle yard is suggested. A drawer-slide mechanism, about 17in long, should provide the workings nicely. Alternatively, you could easily make a couple removable cassettes to shift the stock from track to track in the fiddle area. Short switching locos and four-wheeled cars are recommended! 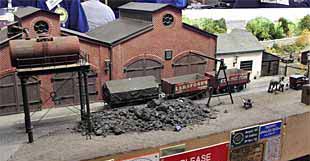 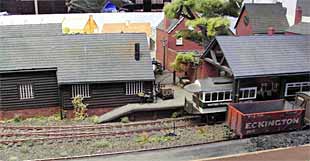 One of the best “tricks” for designing a good small layout is to copy the prototype’s trackage from a real-life, compact setting. One good example is the little yard at Wantage, in Berkshire, England — terminus of the excessively charming Wantage Tramway (1875-1945). Several layouts based on Wantage have already been featured on this site — in the Gallery (where Giles Barnabe has reproduced nearly the verbatim trackplan) and here in the Scrapbook. Here’s another, an O scale line by D and S Cox. It was photographed at last year’s York Exhibition by Emrys Hopkins and features very nice scenery.

According to the Exhibition catalog, “This layout is closely based on the Mill Street terminus of the Wantage Tramway Company. The period is approximately 1920 before the demise of the passenger service. The railway buildings are all based on the prototype structures, but the gasworks [upper left] which hides the fiddle yard is pure fiction.”


SOME NEW DESIGNS ON FAMILIAR THEMES

Herbert Fackeldey, from Aachen, Germany, has revisited a classic layout from our Micro Layout Design Gallery, to give a Continental look to an English layout. Says Herbert:

“I much admire the King’s Pancreas trackplan by Emrys Hopkins, a Central London terminus only six feet long. However, when I tried to draw a Continental version of it I wound up with something that cannot claim to be a micro layout. But I think it still qualifies as a small layout, being 250cm (8ft 4in) long.

“The most important difference from the original plan is that the rest of the station is supposed to be in front of the layout rather than behind it. The front platform is only half the width, and the pillars of the canopy will stand on the front edge of the layout. Behind the tracks there is a retaining wall with the canopy resting on top of it, and a wooded embankment. The backs of houses may be painted on the backdrop. I confess to have borrowed most of the features from my local station, Aachen Hbf.

“This layout of course would not offer the full potential of a large urban terminus, but a brisk commuter service would be possible along with some shunting of parcels or postal vans. One disadvantage of the design is that locomotives running around their train in the fiddle yard would necessarily have to enter the station, but light engine moves weren’t infrequent on large stations, and if some extra space were available, it would be better to use it to make the platform and fiddle yard tracks longer.”

Jack Trollope, from the Highlands of Scotland, has interpreted Alexander Lehmann‘s ingenious design, Rainer’s Quay, to work as an HO layout with modern U.S. 50ft cars and diesel road engines. Jack’s also added a car-length traverser at the right, which provides even more flexibility in operations. Jack notes, “After first drawing it I realised that if the sectorplate, which has a limited arc, can hold a wagon or loco rather than a wagon and loco, you get more running about and save 6in in length. I only had 50ft cars in XTrkcad so I used them. You could save a little with 40ft cars (possibly an inch at each end).

Follow a few operating maneuvers on this clever layout to see the operating possibiities in the design! Leaving the back of the building open allows insertion and removal of cars to permit constantly changing traffic patterns on this busy waterfront line.

Here’s an update on Fabrice Fayolle‘s portable N-scale exhibition layout, Point Davis, set in the U.S. state of Oregon. Fabrice lives in Amiens, France. This layout has appeared in Scrapbooks #42 and #45.Above is an overview of the complete module, with a backdrop in place. Below are several layouts showing the level of detailing that Fabrice is putting into this N-scale layout. He’s also added a very neatly made traverser fiddle yard (below right). 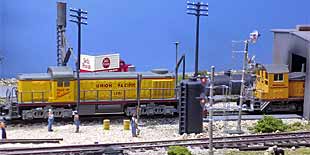 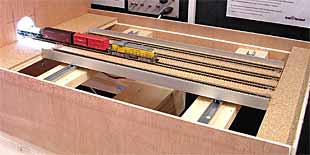 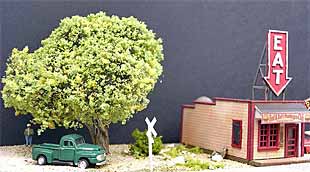