Carl Arendt presented this clinic at the March 2009 Jamboree of the National Model Railroad Association Mid-Central Region/Division 2, in Pittsburgh USA. Its purpose was to acquaint the audience with some ways to enjoy running trains on minimum space layouts, starting with the simplest ideas and building up to some complex operating methods. Some of these ideas were familiar to this audience, and some were not. This report presents highlights of the presentation, using a selection of the original slides.

Good morning! This clinic will explore ways you can enjoy prototypical operation with your minimum space or micro layout. Just among ourselves, when no one else is listening, we usually call these “some great ways to play trains.” I assume that everyone is familiar wth the ideas of establishing train timetables and creating car cards and waybills for local crews to use in large, basement-filling layouts. The ideas we’ll be exploring together are different—they’re mostly ways that a lone-wolf operator, or just a couple of friends, can have fun with a small layout (under 4x6ft) at home. Needless to say, they contain some good ideas for operators of larger layouts as well! The examples shown are borrowed from my website. 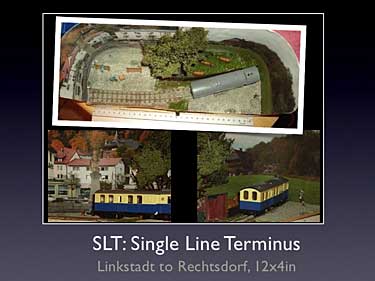 For more about this layout see Scrapbook #80a.

Let’s start with the simplest possible minimum space layout—a straight line with no turnouts, called a Single Line Terminus (SLT). Believe it or not this line, going from here to there, can be operated in an entirely prototypical manner! Nigel Beeton’s tiny H0e (HOn30) layout, Linkstadt-Rechtsdorf, features railcar service between lively Linkstadt (on the left) and rural Rechtsdorf (at right). Clever scenery management simply eliminates the boring stretch of railroad between the two termini. Timetable operation is easy and plausible. No signals are required! The only problem is that operations become a little tedious for the operator after awhile. 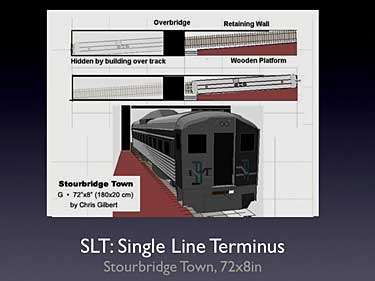 For more about this layout see Micro Layout Design Gallery.

Chris Gilbert’s Stourbridge Town uses the same track plan as Linkstadt-Rechtsdorf, but a new ingredient is added—a fiddle track. The idea of “fiddling” (rearranging things by hand, behind the scenes) allows operations to become much more complex and interesting. The fiddle yard is usually hidden (as here) and generally represents “the rest of the world” beyond the layout. In the case of Stourbridge Town, the RDC car can load at the platform, then disappear beneath the overbridge. After a pause, something completely different can re-enter the scene… a small railcar, a wagon of freight for local merchants, and much more. Fiddle yards, as we’ll see, are often an integral part of enjoyable operations on small layouts! 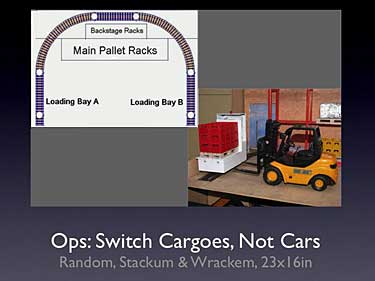 For more about this layout see Scrapbook #80.

Still operating on single-track layouts, some “out of the box” thinking can greatly expand the fun of a simple layout. One concept is “Switch Cargoes, Not Cars.” Using just a few permanently-coupled railroad cars (wagons), the operator determines which of many loads to deliver and which to haul away, loading and emptying the cars to suit the switching instructions. In John Garaty’s Gn15 forklift layout, a narrow-gauge railroad runs inside a factory to bring in loaded pallets from the offstage receiving dock. The RC forklift is used to distribute pallets to shelves chosen by rolling dice and to replace outgoing pallets on the train. Lots of action, with no turnouts! Andy Anderson originated this creative approach by modeling the shale oil industry in his layout, Cuddle. 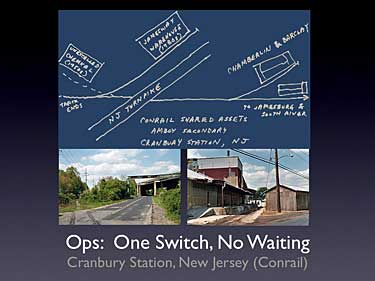 For more about this prototype see Scrapbook #82.

4. Add a Turnout: the Fishhook

Cranbury Station, New Jersey, researched and drawn by John Bruce, shows how much operation can be added with a single turnout. As on the full-sized line, model trains would arrive loco-first from a distant yard, here a hidden fiddle yard at right. Switching proceeds normally, dropping loads and picking up empties, then the train pushes the empties back to the yard (offstage). Also, just beyond the NJ Turnpike is a great prototype example of the “invisible industry,” where the spur (at left) just disappears into the woods, serving an unseen factory deep in the forest. This approach can justify all sorts of operating traffic that is simply dropped on the spur for the local switcher to pick up! Between the imaginary industry and fiddle yard, there’s no limit to rolling stock diversity!

A classic example of a fishhook single-turnout design is Dick Andrews’s Drawing Board Layout in On2. A loco switches the standard-gauge interchange, then backs over to the fishhook and pushes the train up the hill to the quarry, remaining prototypically on the downhill end. 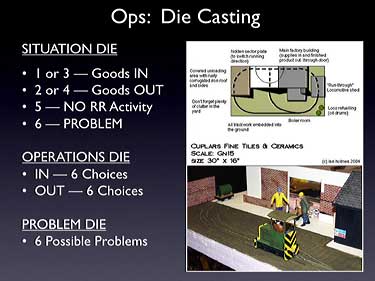 For more about this layout see the Micro Layout Design Gallery.

Cuplars Fine Tiles & Ceramics is a one-switch layout for which Ian Holmes created a good example of die casting (i.e., throwing dice) to randomly generate switching problems. With a regular six-sided die, the first cast determines the SITUATION: deliver material IN, haul material OUT, do nothing, or encounter a PROBLEM. The second cast adds OPERATIONS detail to the IN or OUT result: one, two or three loads of clay, or coal, or pallets IN; waste products or finished goods like tiles or pots OUT. Another cast for PROBLEMS might encounter issues like “Locomotive failure, get replacement” or “spare parts needed at clay pit.” Simple die-casting tables can generate lots of operating fun! 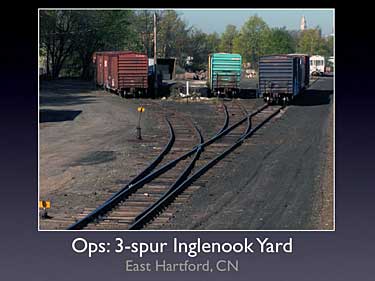 For more about this prototype see Scrapbook #73.

These tracks on the edge of Connecticut Southern Railway’s East Hartford Yard form an Inglenook switching game, using two turnouts. Stuart Pate took the photo. With just two switches and some straight track, it’s easy to set up a model Inglenook that can provide hours of entertainment. Visitors to this site probably do not need an introduction to the Inglenook, the U.K.’s most popular switching plan, but if you do there’s a good intro at Adrian Wymann’s Shunting Puzzles site. Also have a look at Scrapbook #69. In this clinic, I assume that you already know about the Timesaver, John Allen’s popular U.S. switching game also covered on Adrian’s site. Both games were featured side by side at a recent meet in Pittsburgh. 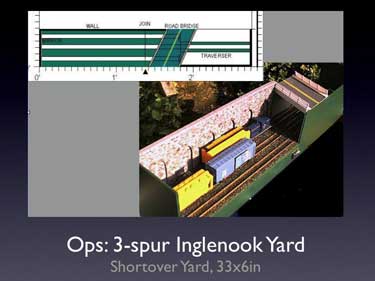 For more about this layout see the Micro Layout Design Gallery.

When space is too tight for even a two-turnout ladder, the good old transfer table (called a traverser in the U.K.) can come to the rescue. Arranged to access a group of parallel sidings, as in this example by Jack Trollope, the transfer table can foster an enjoyable evening of switching fun and frustration in very tight quarters! Various Inglenook-style shunting games are easy to set up on this little line. A large armada of micro layouts has appeared using this design in recent years, but as far as I know, this layout was the first. 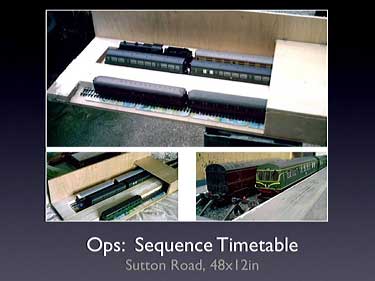 For more about this layout see Scrapbook #67.

8. Set Up a Sequence Timetable

Using the transfer table trick, Bob Hughes has set up Sutton Road, a mainline passenger terminal just four feet long including fiddle yard! Three parallel tracks form three platforms of a terminus. The visible section is slightly shorter than the length of two carriages (coaches) or a locomotive and one coach. A wide variety of passenger stock can appear: for example, main line locos pull in followed by a baggage car, uncannily suggesting a 16-car train extending back under the overbridge. MU’s and DMU’s pull in and depart to accommodate local passenger service, and more. All of this is controlled by a Sequence Timetable—a list of events, not times, that determines what happens next, for an evening of operating fun! An example table is shown in Scrapbook #67. 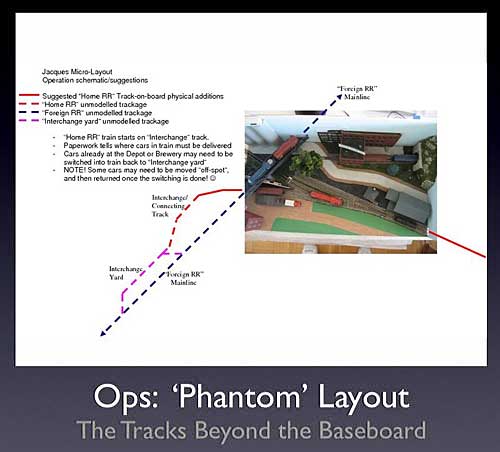 Prof Klyzlr replied with a complete diagram (right) showing how an imaginary “phantom layout” could be created in Jacques’ mind to provide a pattern for serious operations! Using the lefthand siding as a connecting track for “Foreign RR” interchange gives Jacques a focus to plan car assignments and train movements. Cars can be routed to spots on and beyond the “Home RR.” The layout develops new purpose, and operations are a lot more fun! 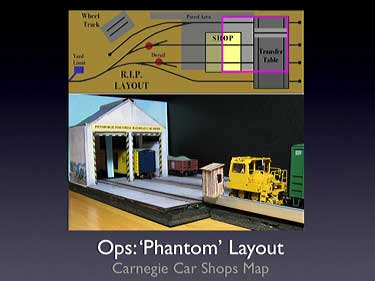 For more about this layout see Scrapbook #73.

Another example of how a “phantom” layout can bring operating depth to a small railroad is my own Carnegie Car Shops—another variation on Shortover Yard. However, this layout is designed as a corner of the east end of a prototype car repair shop, including a Loco Lift standing in for the transfer table on the original. Cars appear on the entry track, and rolling a die determines what repairs they require, which in turn determines which track they’re spotted on. Things can get complicated very quickly, and operations on this line, which is the size of a sheet of letter paper, can be highly entertaining. 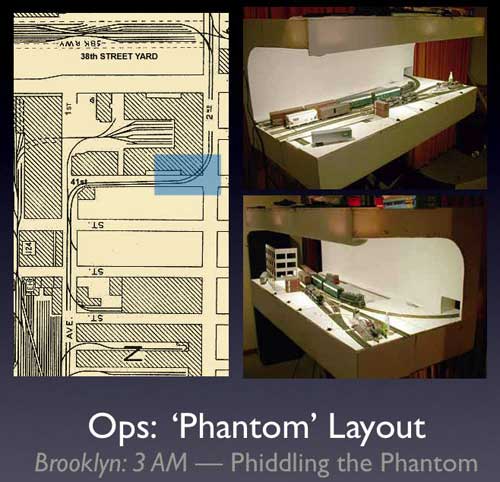 Prof Klyzlr is making even greater use of the phantom layout concept in his work-in-progress, Brooklyn: 3 AM. This layout is set in 1990s Brooklyn waterfront at the corner of 41st Street and 2nd Avenue. As the map shows, this is part of the main line of the New York Cross Harbor Railroad between the 1st Avenue and the 38th Street Yard. A lot of traffic passes through this little segment in both the real line and the 4x2ft model, and the Prof has rigged a four-road transfer table to simulate a variety of routings, including the 1st Avenue Yard and various switching destinations along 1st Avenue. Train routes are chosen by the engineers of each train, and the transfer table automatically adjusts to provide them access to their imaginary “destinations.” This project is shaping up to be a small-layout modeling landmark, and we’ll be bringing you its story in much more detail as it nears completion.

Eight years ago, I chose as the definition of a micro layout the sentence: “Micro layouts are small model railroads, usually less than three or four square feet in area, that nonetheless have a clear purpose and excellent operating capability.” The work of modelers around the world has demonstrated that very small layouts can be exciting and inspiring models, with a focus and a purpose. Many of those layouts are on display in these pages. This particular clinic was designed to showcase some of the many ways that creative modelers now use to operate their minimum-space layouts, keeping the fun going after construction is complete. There are more ways, and we’ll be revisiting this topic. If you have an operating system or idea you’d like to share, please be in touch… click on photos and words below.